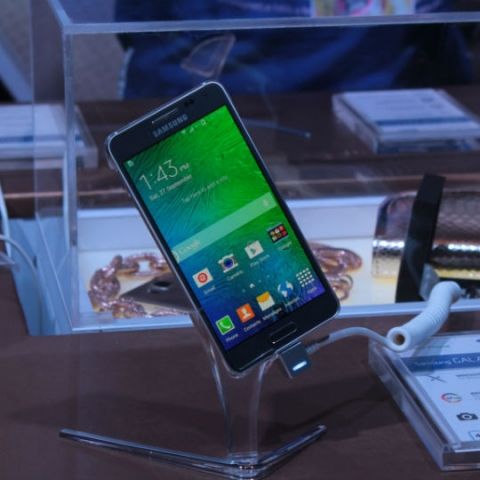 The global leader of the smartphone market, Samsung Electronics, has often taken a lot of flak over the lack of metal on its devices. Well, the company finally gave in, with the Galaxy Alpha smartphone, which was announced about a month ago. The device was launched in India today at a strategic price point of Rs. 39,990, taking on competitors like the Sony Xperia Z3 Compact and the Motorola Moto X (2nd Gen).

How it fares against the competition can only be ascertained once all the three devices have been reviewed. Samsung could be dealing a major blow to Sony with its pricing for the Alpha though. But more on that later, for now, here’s a first impression of the Galaxy Alpha smartphone. 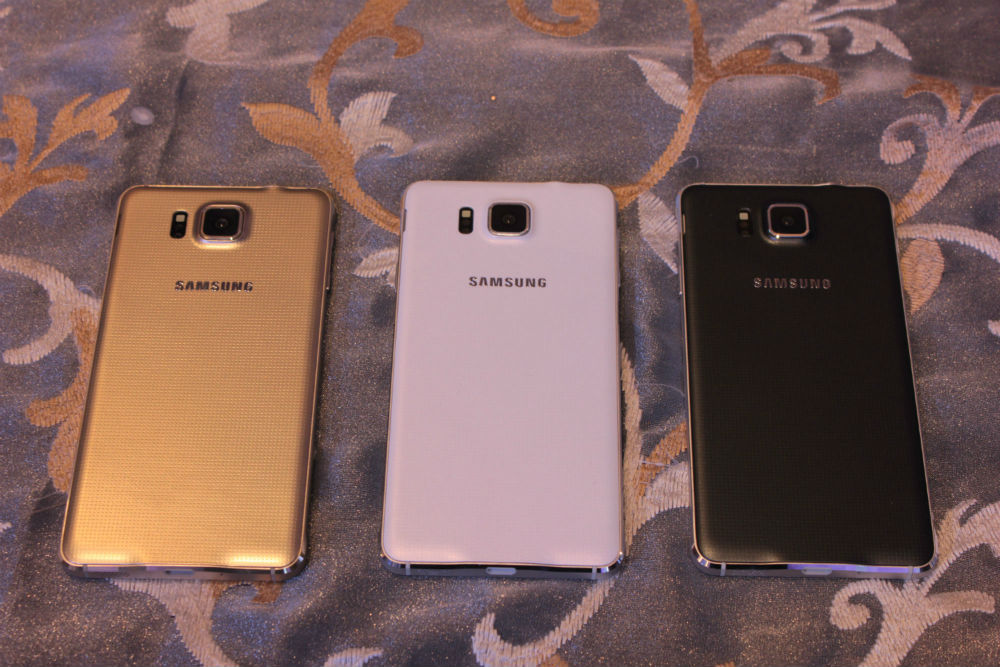 The Alpha will be available in Black, White and Gold colour options. (Click images to enlarge)

Samsung is playing up the style factor associated with the metal frame around the Galaxy Alpha. While this does add to the looks of the smartphone, the Alpha really isn’t a contender against the likes of the iPhone 5S and HTC One (M8). Still, the Galaxy Alpha does have some important high points to it. For starters, it is incredibly light and slips into the pocket without any hassles. It seems to be lighter than the 115 gram that it weighs on paper.

Secondly, the light weight is accompanied by a 6.7 mm thickness, which also makes it very thin. On top of this, Samsung has hit the sweet spot with the screen size, choosing a 4.7 inch Super AMOLED display, which is easy to use. The screen is long instead of wide though, which wouldn’t make the ideal build for single handed usage, but it makes a lot of sense for those who watch a lot of videos on their device. Also, the screen is quite bright and looks attractive. 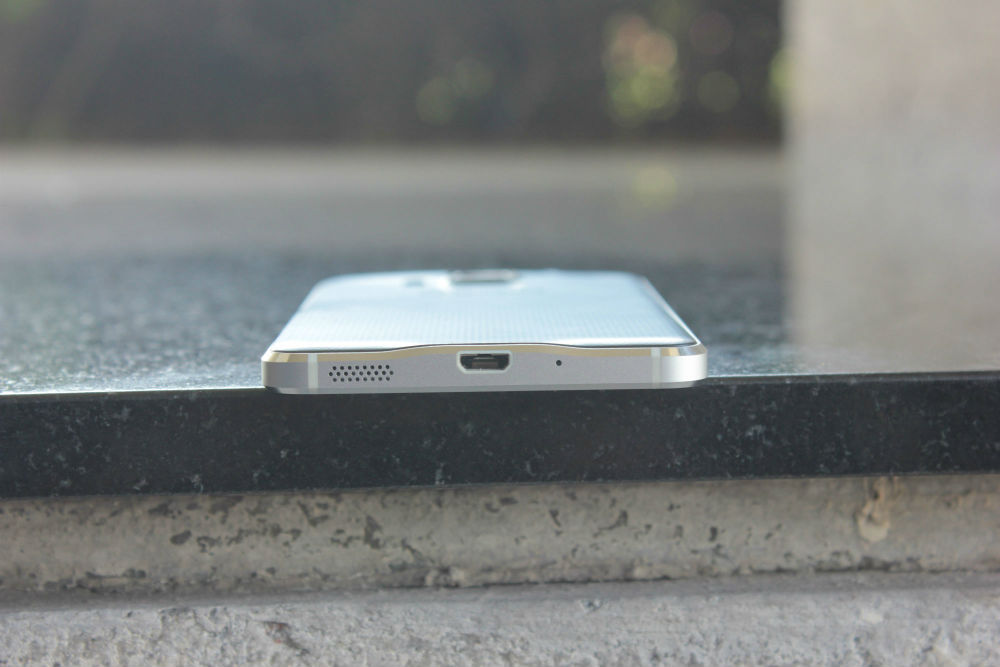 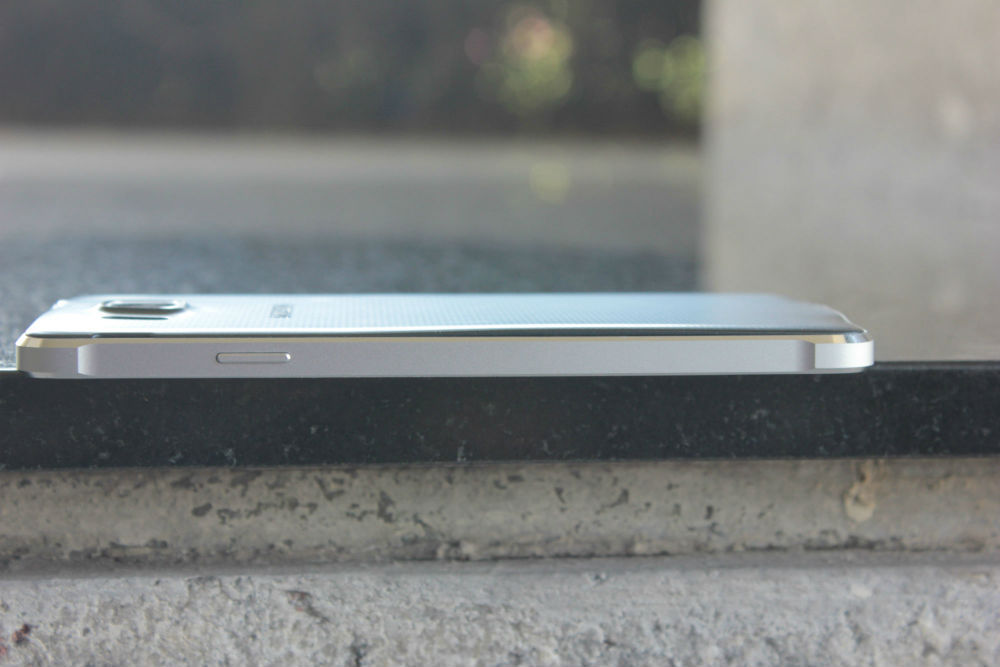 The Galaxy Alpha is very slim and better looking than many other Samsung devices. (Click images to enlarge)

One of the things I really liked about the Alpha was how responsive the Touchwiz UI was on this. The UI seems snappy, even snappier than on the Galaxy S5, which also runs onthe Exynos 5 SoC. The S5 though runs on the Exynos 5 (5422) SoC, while this is the newer Exynos 5 (5430) SoC. It seems the Korean giant has made significant advancements in its octa-core SoC to deliver better performance than before. Demo units though aren’t the best to judge performance of a smartphone, considering that they have almost no apps on them and nothing to really test the processor. Nevertheless, the S5 didn’t seem this responsive on first impressions when it was launched. In fact, this explains why Samsung is calling this its flagship smartphone. 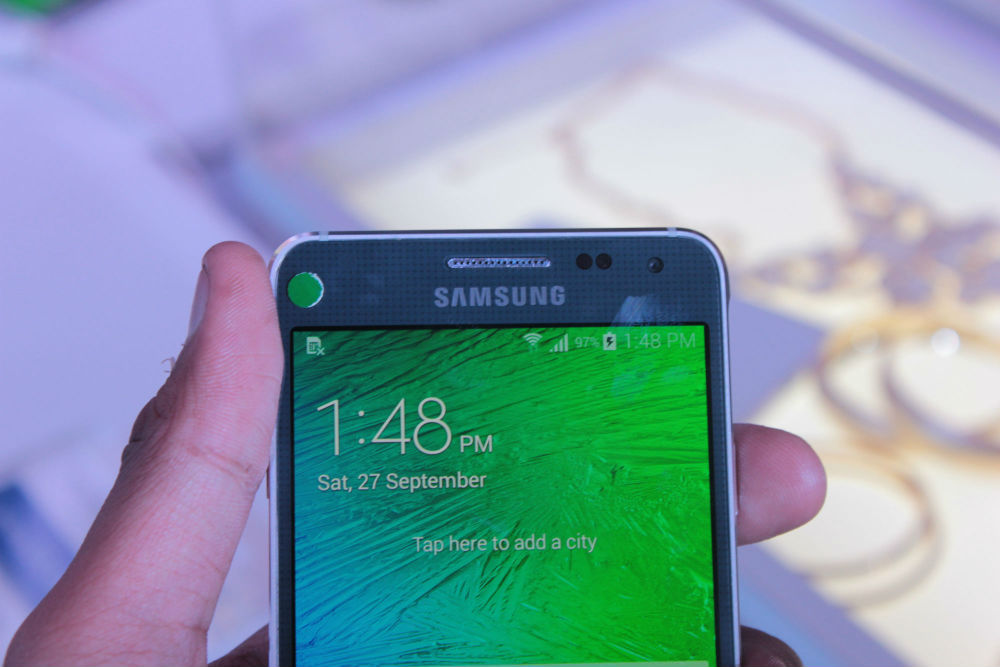 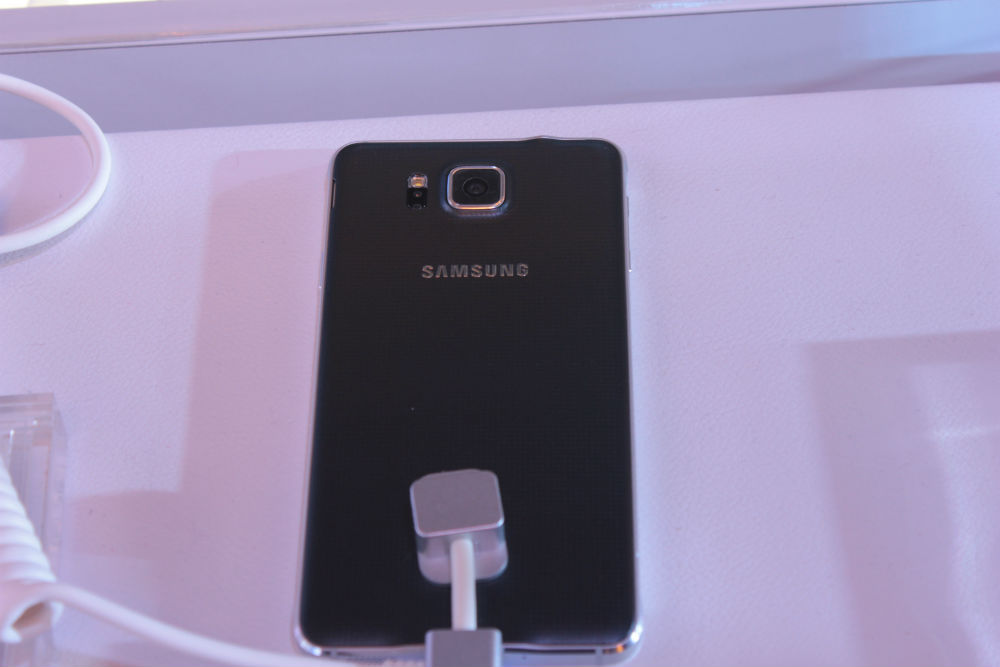 The device has a 12 MP rear camera and a 2.1 MP front camera. (Click images to enlarge)

A disappointing aspect of the Alpha though is that the screen resolution tops out at 720p. For a device priced at 40k, I would want a 1080p display. Moreover, the new Moto X, which is priced at over 8k below the Alpha, has a 1080p display. Compared to Sony though, the AMOLED display on Samsung’s device is much brighter and provides better sunlight visibility than the Xperia Z3 Compact. Also, the Alpha is a good example of why AMOLED displays do better than IPS displays, as the 720p on this looks much better than other 720p displays.

There are two other issues that you may have with the Galaxy Alpha. First, the faux-leather back on the S5 is back in the Alpha and second, that the device’s camera isn’t as good as the now lower priced Galaxy S5. The Galaxy Alpha though good with white balance, doesn’t provide the kind of sharpness that we saw from the Galaxy S5 and even the Note 3. The 12 MP rear shooter is satisfactory, but the 40k price tag again makes the choice questionable. The 2.1 MP front camera though is more than satisfactory on this one. 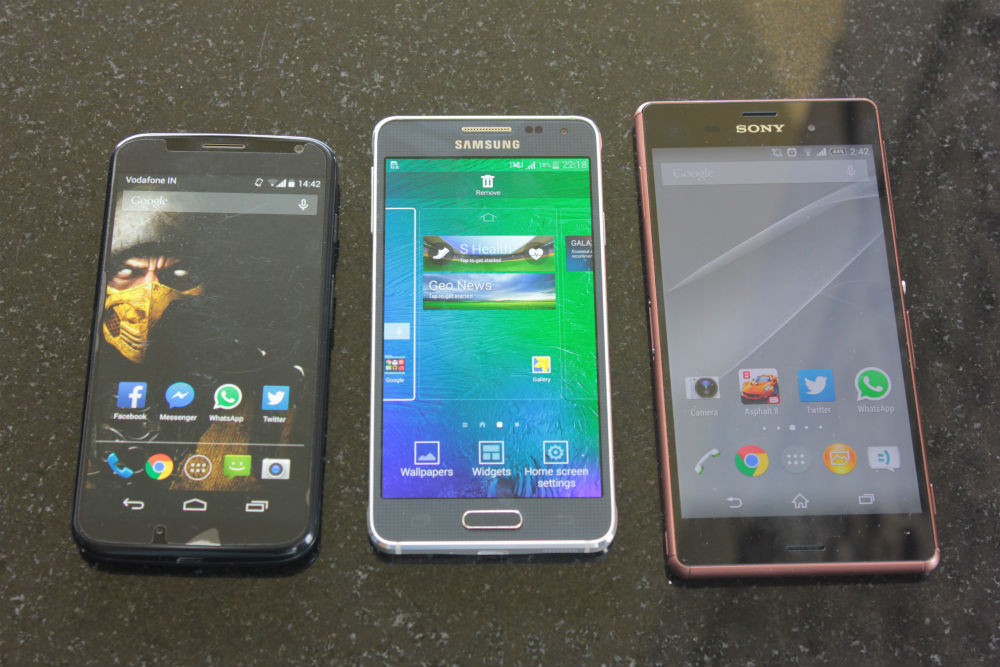 The Samsung Galaxy Alpha has a removable battery and back. Also, its screen is brighter than the Sony Xperia Z3 Compact. (Click images to enlarge)

Perhaps none of the above mentioned faults though compares to the last thing I noticed at the launch. The Galaxy Alpha heats up quite easily. I took a 40 second FHD video on the device and could feel the back heating up. I also played around with the device some more, using the camera for a few shots and looking around the UI, which heated it up a little more. This took all of about 10 minutes. While the device was nowhere close to being uncomfortable, it begs the question as to what the Alpha would be like when it goes through real resource intensive activities. This argument is further corroborated by the fact other thin devices with octa-core processors have shown tremendous heating in the past.

The company’s love of plastic though comes in handy in this case. The material used for the back heats up slower than a metal or some other materials. The Micromax Canvas Knight for example, had a Glass back coupled with a MediaTek octa-core and heated up to really uncomfortable degrees. The Gionee S5.5, which was once the thinnest smartphone in the world, is also no stranger to heating issues.

Overall, there are things to like about the Samsung Galaxy Alpha. The metal frame does add to the looks of the smartphone, even though it doesn't feel as metallic as it looks in pictures. This coupled with the 4.7 inch screen and overall form factor, this is definitely one of the best looking smartphones from Samsung. The lightness also is mind blowing. A full review will tell us more about whether this device justifies the price.