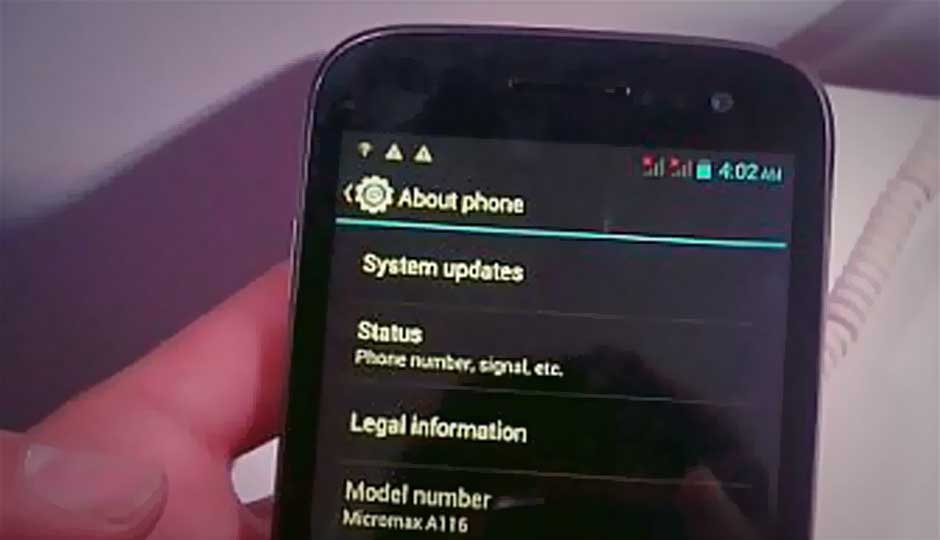 Micromax today announced the next flagship device in its Canvas portfolio, the A116 Canvas HD. The device boasts of some pretty impressive specifications under the hood.

The Micromax A116 Canvas HD is quad-core powered (a 1.2GHz MediaTek MT 6589), and sports a 5-inch IPS display with a 1280x720 pixel resolution. Under the hood, it has quad-core along with 1GB of RAM. It also shows off a PowerVR SGX5 GPU. The A116 boasts of dual-SIM capabilities. It has 4GB built-in storage expandable up to 32GB via a microSD card. The rear of the device houses an 8MP camera whereas the front has a 0.3MP shooter for video chatting. It also has a 2100mAh battery.

The Micromax A116 Canvas HD smartphone is the first smartphone from Micromax’s stable to run on Android 4.1 Jelly Bean. After launch the device will be upgradable to Android 4.2 Jelly Bean. There were two dummy devices and one active device at the Delhi launch event, and as you can imagine, we got about five minutes with the active one. Here’s what we thought of it, in our brief first impressions.

To start with, we think the Micromax A116 Canvas HD unit on display was one of the prototypes as it hung a lot and the capacitive buttons refused to respond at times. The display of the device looked quite crisp. Having used the Canvas 2 A110 just a few days ago (read our review), the difference in the display can be seen instantly. The interface of the Micromax A116 Canvas HD was very smooth and swiping between screens and menus felt smooth, smoother than what we have seen on some ICS devices. The skin on the device looks minimalistic, something on the lines of the A110 and that is a good thing. The Micromax A116 Canvas HD's lock screen looks stock Android giving you access to the home screen, camera or Google Now with a single swipe.

The Micromax A116 Canvas HD has a very slim form factor – 10.7mm thin. It was very comfortable to hold in one hand but typing is something that is still reserved as a two-hand job. The volume rocker rests to the right of the device and the power button is on the left. The top houses the headphones jack and the microUSB port. In terms of its overall design and build, the Canvas HD felt sturdy.

The camera on the A116 was very snappy. It took pictures quickly and from what we could see in front of us, it did a pretty good job. Although the lighting in the hall wasn’t the best, the image still looked more than presentable.

As we have said, we think this was a production demo unit of the A116 Canvas HD, and hung a bit while we were using it. We will save our final comments about the device when we get our hand on it towards the end of the month.