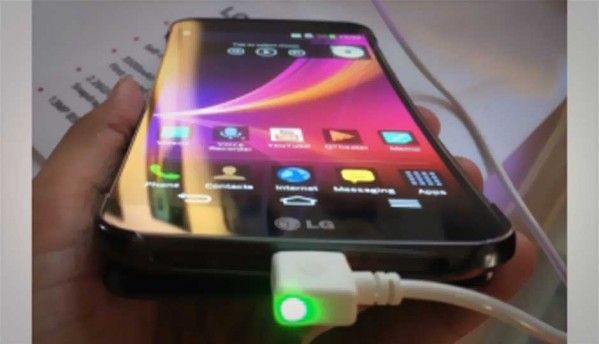 There remain few boundaries that smartphone manufacturers can push. Today we saw one of those rare cases of actual innovation. Making the first move in the market, LG showed off the G Flex smartphone to the media in India, today. I had the chance to use the phone for a short while, and it's quite safe to say, have come back with mixed emotions emotions. Please allow me to explain.

Unlike what the name would have you believe, this is not a “flexible” smartphone. But, it is a smartphone with a curved design thanks to a curved display. If you were visualizing using the phone as one of those helpful stress reliever squishy balls, stop now! But, thanks to its “curved” nature, the G Flex does bring in something visually unique. There have been some phones with the “curved” design already, but the fact that the G Flex goes all the way with the display playing along as well, just looks rather unique.

The 6-inch display is the Plastic OLED (POLED) type and uses a foundation of plastic along with the curved OLED panel. The substitution of glass with plastic helped make this happen, giving it the shape. LG says that it is equally durable and allows for more precise implementation of RGB within each pixel.

LG says that this display is a result of the successful collaboration between LG Display and LG Chem.

In terms of the quality, what I saw was quite stunning. Unlike AMOLED screens, the colours on the POLED screen looked rich, but not overwhelmingly so. Text rendering was brilliant, but even at full brightness, the display does have a slightly reflective nature. Compared directly with the brilliant IPS display of the LG G2, the G Flex’s 6-inch screen comes very close in terms of colour quality, text rendering and overall crispness.

While we have established that LG is doing excellent work with its smartphone displays, there is the big question about whether the curved display and smartphone actually make that much difference. In my opinion, while it is all fair and expected that the G Flex will gather a whole lot of attention, usability doesn’t really see any enhancement. For a phone that already has a 6-inch screen, single hand operation is out of question. This brings us to the media playback, but a curved screen’s “wraparound” impact cannot really be felt on a screen as small as this. But, we will reserve judgement till we actually get to use the phone in detail, to see how much of a difference this makes in the real world.

Certain neat feature seen in the G2 have been carried forward here as well. The “Rear key” package means that keys usually seen on the side spines - like the power key, are on the back panel. Double tapping the display to wake the screen up has been implemented in the G Flex as well, and so is the UI wrapped around the Android OS.

Another new feature with the G Flex is the “Self Healing” back cover, which has an elastic coating to hide away the scratches and dings that any smartphone is usually subjected to on a daily basis. No need to put a cover or a case on the phone, then!

I personally am really looking forward to using the G Flex in detail, to see how this really fits in a real world scenario. There is a lot of potential, but it remains to be seen if it is all fulfilled. However, that may be a slightly long wait, because LG says that the G Flex will be available in India from February 2014, but no pricing details have been announced as yet. However, if you are considering this phone seriously, remember - this will cost a hell lot of money, and the iPhone 5S may look rather inexpensive in comparison!