We had a feeling that the Windows 8 Phone devices will be truly amazing, but there is probably none that is a better example than the HTC 8S.

For a phone that will retail in the market for around Rs. 19,260, the HTC Windows Phone 8S looks, feels and performs like it deserves a higher price tag. Not that we would want that to happen!

We had a chance to play with the HTC Windows Phone 8S at the HTC event recently, and here are some initial observations:

1. The colour options are truly unique. Never have we seen so many good colour options in one phone’s range, all of which can be considered! This is possibly the most attractive feature of the 8S. The colour goodness is dual tone too. You have the red, light grey, black and sky blue colours for the back panel, while the bottom strip and the front face below the display will be with orange, light blue, white and lime green. The combinations are predefined - red with orange, blue with the lighter blue hue, black comes with the white stripe, while the grey combination with lime green contrasts the subtle and the bright elements very well.

2. The polycarbonate finish has a rubberized treatment on it, something that till now seemed to be the exclusive reserve of more expensive phones. You can hold this between your shoulder and tilted head and this will not slip out and fall down.

3. What HTC has done brilliantly is blended in the rounded edges well with the sharp overall look. The front had a very edgy design, with the display, the Gorilla Glass later and the straight-lines keys below the screen. the back is slightly rounded.

4. On the spec sheet, the 8S does fairly well. a 1GHz dual core processor powers the phone, and is paired with 512MB of RAM. Had this been an Android phone, this would have been a huge problem, but not so on Windows Phone 8. There is 4GB of internal storage, with a microSD slot for memory expansion. While the elder cousin, the 8X gets an 8MP camera, this one has a 5MP clicker with 720p HD video. The 4-inch S-LCD display has a 480 x 800 pixel resolution.

5. Just like with the HTC Legend from a couple of years back, the bottom most dual colour portion on the back panel can slide to open and this is where you access the memory card slot. The battery remains hidden away.

6. What can be an HTC phone without its own unique additions? Just like the HTC Sense on Android phones, there is a time and weather tile that shows up the time, the current location and the weather. Click on that to open up the app with detailed forecasts.

7. Interesting features like “quiet ring on pickup” and “mute on flipover” make a return on this phone. Not huge features, but rather nifty for those who use them.

8. The inevitable Beats Audio branding on the back. However, you cannot activate or change any Beats Audio settings when using the phone’s built-in speaker. These options are available only when you plug in any headphones or external speakers via the 3.5mm headphone jack.

9. The HTC 8S gets a 1,700mAh battery. While this is not a lot, we would reserve any judgment till we get to test the backup times on offer.

We will be getting the HTC 8S Windows Phone for review very soon. Do stay tuned for that.

We are expecting this to be a value for money Windows phone for just under Rs. 20,000.

In the meantime, you can check out some pictures of the phone, straight from the event. 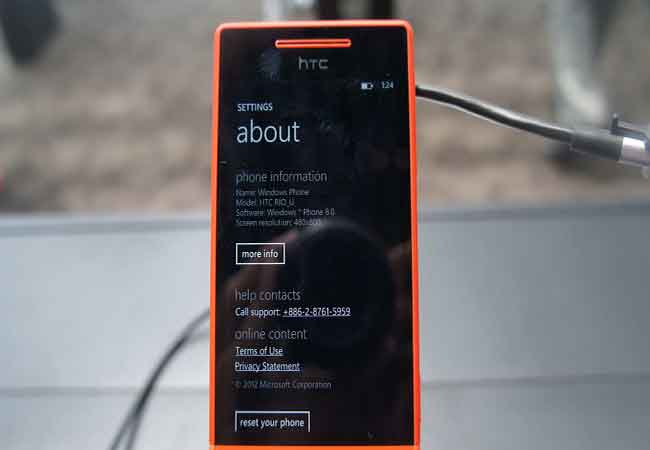 The details of the phone, codenamed HTC Rio. 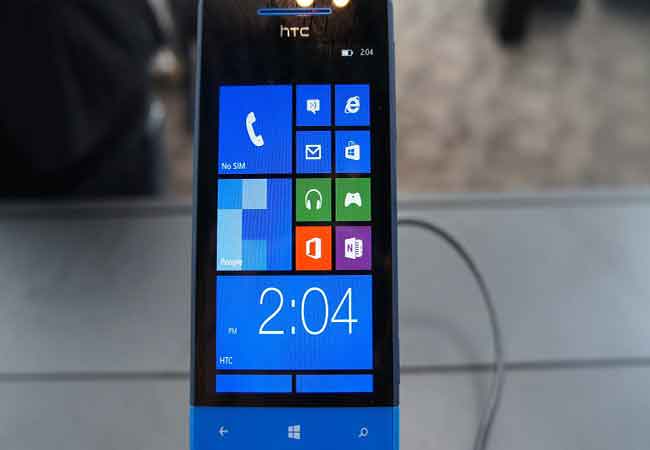 This is the phone with the blue colour treatment. 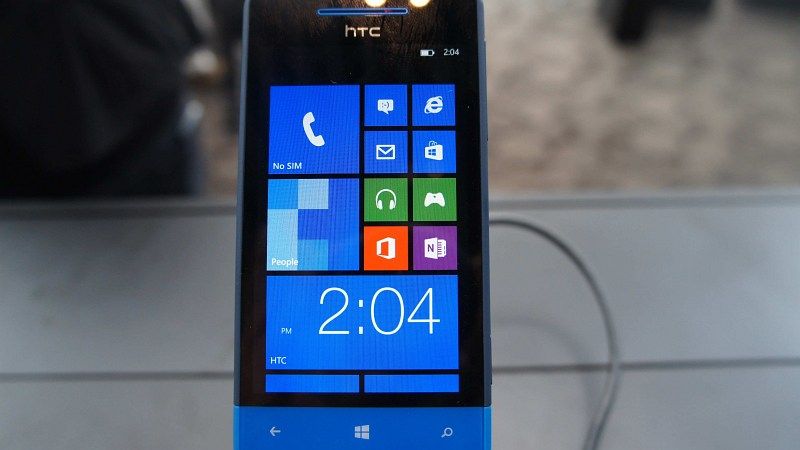 The touch sensitive keys below the display are not on the glass, but the blue coloured real estate. The rubberized finish makes this very ergonimically friendly. 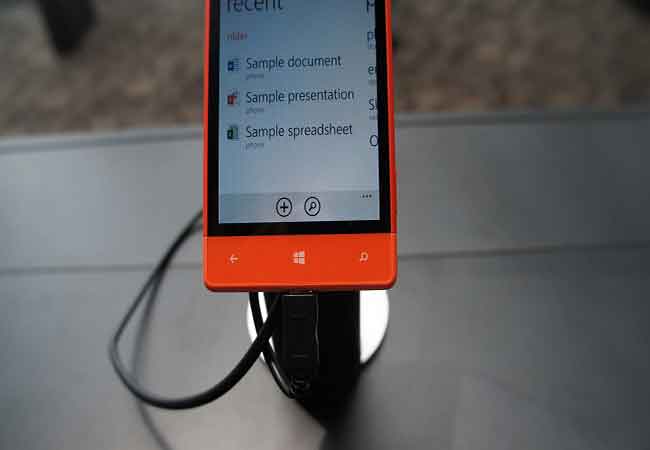 The touch sensitive keys are sitting in the middle of a strip of colour below the display. The design inspiration is reminescent of the way Sony Xperia P and the Sony Xperia S looked. 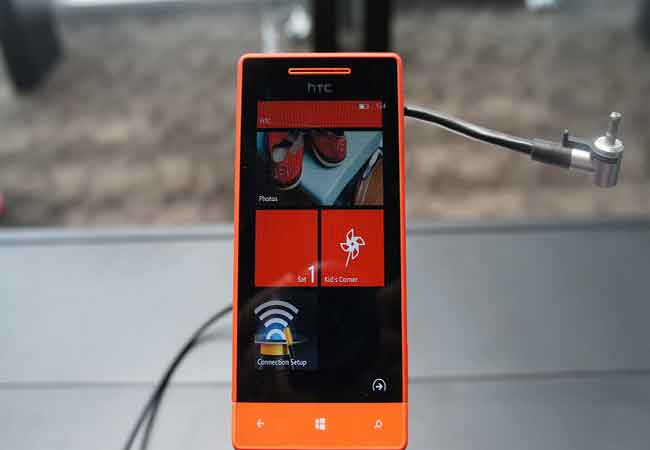 The Live Tiles are just very impressive, and even on the 8S with just 512MB of RAM, there was absolutely no lag or sluggishness. 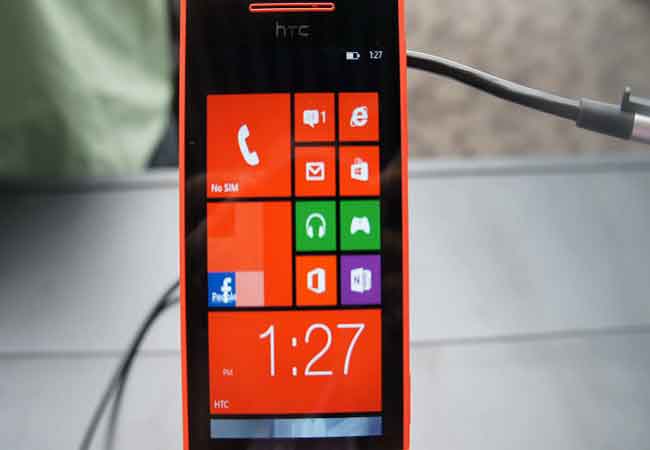 Windows 8 Phone looks very similar on the outside to Windows Phone 7.5, but the major changes are all under the hood. 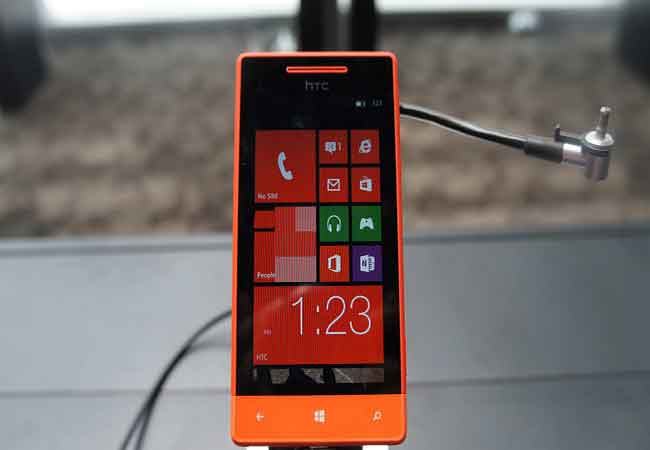 We cannot stop saying this - the HTC 8S Windows Phone looks and feels a lot more expensive than it actually is - The themes used add a lot of colour to the entire package.