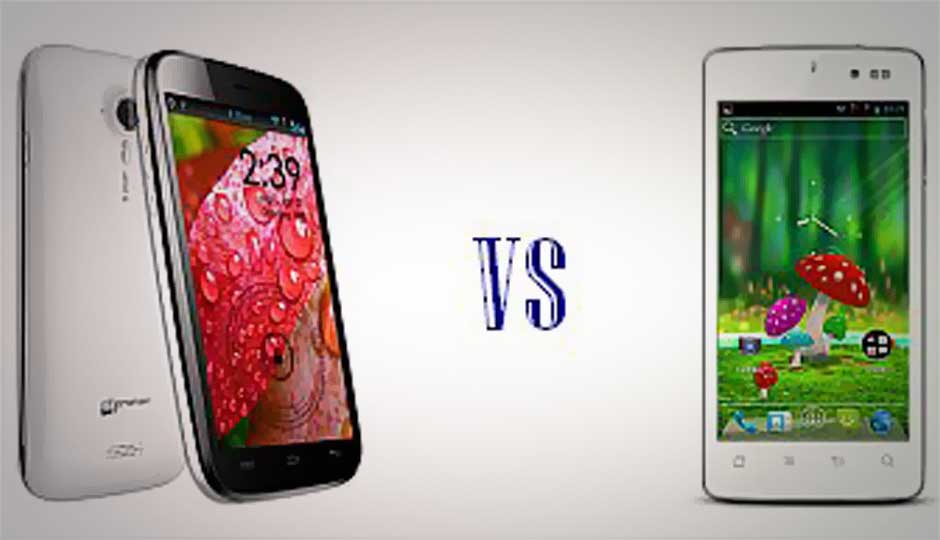 The Micromax Canvas A110 did create quite a storm in the budget smartphone segment. To start with, the device brought with it a dual-core processor, 5-inch display, Android 4.0 ICS and a generally good performance. All this was available for around Rs. 10,000. You can read our review of the A110 here.

Another company that caught our attention is the budget category is Karbonn Mobiles. We really liked the A18 and the A21 (review to be posted shortly) as entry-level Android devices running Android 4.0 ICS. The experience is relatively vanilla reducing the frustration caused by third party skins.

Both these companies have decided to bring quad-core budget smartphones to the consumers. Both the Micromax A116 Canvas HD and the Karbonn Smart Titanium 1 have been unveiled but are yet to be made available in the market. They are expected to hit shelves in early February. Both of them boast of a quad-core processor and some serious power under the hood for the price that you will pay for them. So let’s start by taking a quick look at the specifications of both the smartphones.

Micromax hasn’t announced an exact price for the A116, but has said it will be under Rs. 15,000. Considering the specifications, the price seems to be right. The Karbonn on the other hand has an MRP of 10,990.

Talking about the processors, we note the Micromax A116 has the MediaTek MT6589 processor, which the company claims is the world’s first commercially viable quad-core Cortex-A7 SoC. Check out complete specifications of the chipset here. The MT6589 has four Cortex-A7 cores, clocking in at 1.2GHz, and uses a PowerVR Series 5XT GPU. The combination of the two allows for the processor to provide support for full HD content, along with being able to handle a 13MP camera. It also supports 3D content, and is capable of shooting in 3D and convert 2D footage to 3D on the fly. We have high expectations from power under the hood of the A116.

The Karbonn Smart Titanium 1 on the other hand has the Qualcomm S4 Play MSM8225Q quad-core processor clocked at 1.2GHz. It is also combined with the Adreno 203 GPU. Check out complete specifications of the chipset here. The downside to this chipset is that it doesn’t support a full HD display nor does it support HD video recording. It can support a maximum of 8MP camera, Bluetooth 3.0 and 802.11a/b/g/n via add'l chip AR6005. Another downside to the Qualcomm S4 Play MSM8225Q is that it’s based on the ARM Cortex A5 architecture, which is relatively old when compared to what’s available in the market. We reserve our final comments on actual performance until we review the devices.

Another difference between the two devices is that the A116 has a 2100mAh battery where as the Karbonn Smart Titanium 1 has a 1600mAh battery. We were hoping it would at least have an 1800mAh battery but battery life is something we will comment on once we get our hands on the devices. Both the devices will run Android 4.1 Jelly Bean straight out-of-the-box.

From the above analysis one thing is clear. Micromax has gone all out with the A116 Canvas HD to capture the budget phablet market. The device looks great, has a very impressive chipset and seems to be a package deal. However, we aren’t underestimating the Karbonn Smart Titanium 1. Sure, early reviews on the web of the Cortex A5-based SoC aren’t the best, but you never know. It could just become the ideal entry-level budget Android phone if it passes our tests.

Stay tuned, as we will bring you our in-depth review of both the devices as soon as we get our hands on them!

Smartphone Launches In July 2022: Nothing Phone 1, OnePlus Nord 2T, ROG Phone 6 and more
HTC Desire 22 Pro Metaverse Phone Launches With VR, NFT, And Other Goodies
Asus ROG Phone 6 Design And Accessories Revealed In Leaked Renders Ahead Of Launch
How To Eject Water From Your iPhone Or Android Phone?
The Evolution Of Smartphone Camera Photography In India
Advertisements