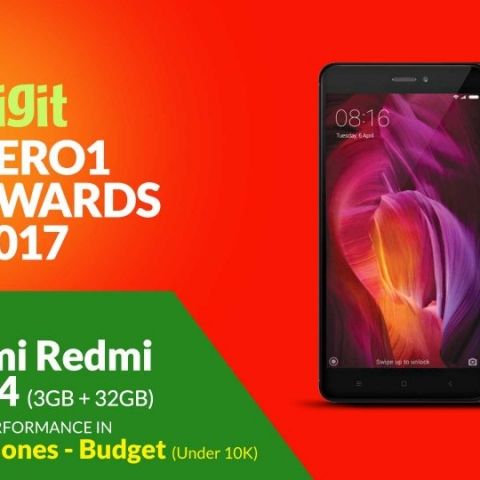 While most of the focus in 2017 was on mid-range Android phones, the budget smartphone segment progressed quite a bit. Brands like Xiaomi, Lenovo, Lava, Micromax and more pushed the envelope further and trickled down some nifty features from pricier phones. While that made choosing between phones a lot more difficult, more choice isn’t always a bad thing.

Features like the fingerprint sensors, dual cameras came down to budget phones this year. Micromax even brought the popular univisium display with 18:9 aspect ratio to the sub-10K smartphone segment with the Canvas Infinity. In terms of performance, few of these budget phones can even give the mid-rangers a run for their money and as a result, they give more value for money than their more expensive counterparts.

However, here at Digit, we give priority to more than just hardware specs and features and out of a dozen or more phones we reviewed this year under the budget segment, these are the ones that won our hearts.

The Redmi Note 3 had won this category last year and this year, the Redmi Note 4 take away the Zero1 in the sub-10K category. Because of its unmatched performance with the Snapdragon 625 SoC, it can run most applications, and although gaming is not completely stutter free, it is better than other devices in the same price bracket.

Xiaomi also improved on the design with this phone. The metal exterior looks and feels more premium than its predecessors and can be considered as a benchmark for this category. The same can be said about the battery life, by the large 4,100mAh battery on the device. During our testing, it gave us eight hours of screen-on time on medium-to-heavy usage and can easily run for more than two days for light users.
The 13MP rear camera on the phone is decent at best and could have been better, but as they say, you can’t have everything.Click here to buy.

The most well-rounded device for your money is the Lenovo K8 Plus. With the latest K-series, the company now has a new approach to software and UI. Some of the elements have been borrowed from Motorola, which is a good thing. Thanks to the new approach, the phone feels faster as it combines a good set of hardware with a stock like Android interface.

Inside you get a MediaTek Helio P25 SoC paired with 3GB RAM. The 2.5GHz Octa-core SoC from MediaTek is almost as fast as the Snapdragon 625 SoC used by the Xiaomi Redmi Note 4, but only loses by a margin. The phone is quite snappy in day-to-day performance and apart from the occasional frame drops during gaming, the phone is quite a reliable performer. The 4,000mAh battery doesn’t disappoint either and can keep up with even the heaviest users for a day easily. The best feature of the K8 Plus is the rear dual-cameras, which is currently the best in the category.Click here to buy.