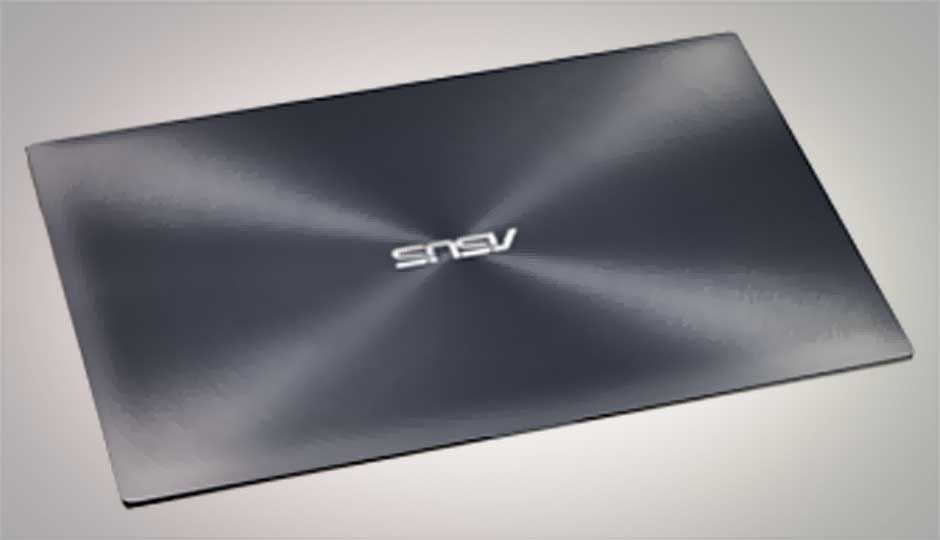 Asus has announced its new Zenbook Prime, a sleek and stylish ultrabook based on Intel's new third-generation Core (aka "Ivy Bridge") processors. Though the all-aluminum Zenbook Prime isn't slated to be released until next week, Asus provided PCMag with a first look at its 13.3-inch UX31A model, so you can get a sneak preview of its visual and technological aesthetics.

Weighing exactly three pounds and measuring 9mm at its thickest point and 3mm at its thinnest, the UX31A is unquestionably light and easy to carry.  This doesn't mean, however, that Asus has skimped on exterior attractiveness.  The all-metal chassis was designed by way of 32 engineering steps that Asus claimed have resulted in "the world's first spun metal finish in [a] curved surface."  The shiny chrome Asus logo in the center of the lid (at the center of the circular pattern) gives the system a striking, serious look.

The inside of the system is just as handsome, with the dark display bezel providing stark contrast to the shiny metal of the keyboard deck.  The multitouch touchpad is of the clickpad variety, and the 83 laser-etched chiclet-style keys are backlit with Asus's ambient light sensor technology, which adjusts the brightness of the keyboard's backlight and the display depending on how much your current environment needs it.

Attention to detail continues inside the Zenbook as well, with a redesigned sound system developed in association with Bang & Olufsen ICEpower.  (This is a revamped version of the one utilized in the original Zenbook - read our review)  Asus said that the oval voice coil provides clearer vocals, oversized shielded speaker magnets result in improved bass, aluminum rings help secure the 2.5-watt speakers and reduce vibration, and the laptop's aluminum body further conducts and insulates sound.  There is also a custom cooling system that utilizes a V-shaped air channel to increase airflow, a beryllium-copper alloy to improve heat dissipation, and copper fins that direct heat out of the case.

For those looking for a high-performance display, Asus has made that an option as well.  You can get for the Zenbook a 1,920-by-1,080 FHD IPS panel that the company boasts has a 72 percent color gamut, brightness of 350 candelas per square meter, an 800:1 contrast ratio, and a 178-degree viewing angle.

But even those who stick with the default screen may benefit from the Zenbook's performance.  We've written about the benefits of Ivy Bridge before, and from better-integrated graphics to souped-up Turbo Boost, they all apply in this ultrabook as well.  Still more speed is provided by way of a standard 6Gbps SATA III solid-state drive (SSD) as the primary storage drive, available in capacities up to 256GB.  In our preliminary, anecdotal testing, the UX31A did indeed seem impressively fast at a number of basic everyday tasks.

Asus wants you to appreciate the Zenbook Prime's virtues even if you're not using it at the moment.  And Asus' Super Hybrid Engine II gives the user two different operating modes for preserving battery life: Performance mode lets the computer run for 11 days in S3 standby mode and resume from sleep in two seconds; using Battery Saving mode instead results in what Asus predicts is a 25 percent battery life improvement, with resuming taking only seven seconds and the computer able to last 150 days of S4 standby.

Network connectivity comes by way of Bluetooth 4.0 and dual-band (2.4GHz and 5GHz) Wi-Fi; there's no room for full Ethernet on this super-thin machine.  As far as ports are concerned, the Zenbooks have a limited selection (as you'd expect from an ultrabook), but chances are you'll find most of what you need.  Our model had two USB 3.0 ports, a headphone jack, a card slot (MMC and SD) and outputs for mini VGA and micro HDMI; you'll find slightly less on the UX21A and slightly more on the UX32 (including a special USB 3.0 port for charging your devices more quickly).  Aside from the jack for the included DC power adapter, that's it.

The good news is that Asus has included a number of accessories to make using the Zenbook more convenient.  These include a form-fitting sleeve bag (about the size and shape of a manila envelope), a manual pack, and a small bag of adapters: mini VGA–to–VGA and USB-to-Ethernet adapters, which many users will undoubtedly find helpful.  An external hard drive may be added as an additional option.

Asus estimated that pricing for the Zenbook Prime will range from about $800 to about $1,600, depending on the model and configuration chosen.  We'll be getting a final production unit in to review soon, so be sure to check back in at PCMag within the next week to see how this new ultrabook stacks up against the competition.