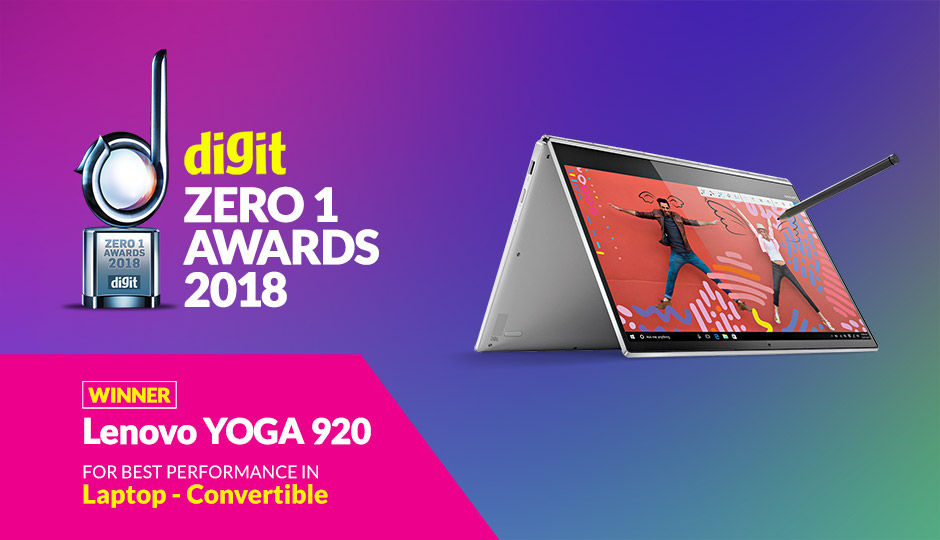 It’s time to pick the best Convertible Laptop for the Zero1 award that sports great performance. Before we see who the winner is, let’s explore the concept of convertible laptops. Convertible laptops are an ideal choice for users looking for portability and comfort. They typically feature a display setup that converts the laptop into a tablet by either folding back all the way back to meet the base or by detaching from the base altogether.

Pivoting displays were a thing back in the days of the ThinkPad X-series Tablet but it’s been replaced by displays that do ‘Yoga’. Convertible laptops can now be used comfortably in landscape or portrait mode. Like Thin and Light laptops, Convertible laptops employ light materials and a solid-state drive for better portability. They generally weigh less than 1.6 kgs and the screen size is less than 14 inches, also typically sporting a stylus.

2018’s Lenovo YOGA may only be a mild refresh from last year’s model but it sure packs punchy performance. The sharp-edged convertible laptop features an 8th-gen Intel Core i7 CPU and 16GB of DDR4 RAM. Graphics are taken care of by an integrated Intel GPU. The YOGA 920 features a super-fast Samsung 512GB PCIe solid-state drive making it the fastest in the storage department among our contenders. The YOGA’s battery outlasted the HP Spectre x360’s by ten minutes, giving it a slight edge there as well. Therefore, the Lenovo YOGA 920 is this year’s winner of the Zero1 award for this category.

The Spectre sub-brand represents the sharpest and slimmest laptops from HP since 2016. The Spectre x360 is a Convertible aimed at portability and premium looks. But it seems that’s not all HP had in mind while designing it. Our review unit impressed us greatly with its rock-solid performance. The Spectre x360’s battery outlasted the Acer Switch 7’s by nearly 80 minutes. It comes with an 8th-gen Intel Core i7 CPU and 16GB of DDR4 RAM. Storage is taken care of by a 512GB PCIe solid-state drive. Graphics are handled by an integrated Intel GPU.

It has support for digital styli like the HP Active Pen that comes bundled with the device. Apart from facial recognition using Windows Hello, it has a fingerprint scanner on the right side of its body so the device can be powered on and accessed directly in tablet mode. The 2018 HP Spectre x360 is this year’s Digit Zero1 runner-up.

The Acer Switch 7 may not be a very popular or well-known model in India but that’s only because of Acer’s weak marketing strategy. The Switch 7 is a Convertible that can be detached from its keyboard to be a standalone tablet. Unlike the other two Convertible laptops vying for the coveted Digit Zero1 award, the Acer Switch 7 features a dedicated graphics card, which makes it ideal for creators who deal with heavier graphics and want to indulge in a bit of light gaming. The Switch 7 comes with an Intel Core i7 CPU, up to 16GB of RAM, and a 512GB SATA-based solid-state drive.

To handle graphics it’s got an NVIDIA GeForce MX 150 GPU with 2GB of GDDR5 video RAM. That’s enough to justify a Photoshop install or the purchase of some light video games like Dirt Rally and Bioshock Infinite. It’s also enough to justify its rather bulky build. We believe the Acer Switch 7 Black Edition is this year’s Zero1 Best Buy.