The best cricket games you can play on Facebook

An article detailing the 4 latest Facebook cricket games, each reviewed, in light of the ongoing Indian Premier League (IPL)

IPL fever has gripped the country. With the IPL matches being broadcast live on YouTube, cricket fervour is at an all time high. On the other hand, Facebook remains a hot destination for Indians with more and more visiting the site everyday. Thus, it's of no surprise that Flash-based games on Facebook have become a rage. For cricket fanatics who are bored of FarmVille and MafiaWars, we have a line up of some of the best Flash-based cricket games Facebook has to offer.

We have three categories of cricket games on Facebook in general: cricket trivia games, cricket fantasy league type games and normal cricket playing games. We have decided to feature only the cricket playing games, as trivia games and fantasy leagues require patience and time, and our focus here is quick fulfillment of the need to play cricket online. The games we feature are ones where you can just load the application and start playing using your mouse and arrow keys. A common thread found among all but one of the games was that you bat and chase a score.

So let the games begin!

ChaYoWo’s Cricket Master Blaster is an online flash game which involves chasing scores in limited overs. In the first level you have to score 12 runs in 2 overs, with only one wicket in hand. After you complete this level, the advancing levels will have higher scores as goals. Along the way you collect ChaYoWo dollars for every four and sixer, among other things. The game also has six state teams much the IPL, which have matches going on the side, of which only results are published.

The gameplay is not that great. The shots are to be selected via arrow keys, based on the direction of the ball. For a beginner it gets very annoying to start the game all over again when he or she loses a wicket. It also takes a lot of practice to get the timing right.

An option to play multiplayer games is also present but not in real-time; only one player can play opposite the computer.

Click next for "Gully Cricket" with its own special rules not found in any cricket book.

Indian cricket is famous for this version of the gentleman’s game. There are rules in version of the game, which you will not find in any cricket book. Most often some matches can lead to brawls between competing teams. Gully Cricket has it all.

The rules are simple. You are batting and have to score a minimum number of runs for that level. The good part is that unlike the previous game, this game has all 10 wickets. Once you complete the number of runs for a particular level, you get the tag of a super hitter. When a bowler takes a lot of wickets simultaneously, he gets a ‘He’s on Fire’ tag around him. A couple of balls after completing the required target, the opposing team members gang up and a brawl follows. To stay safe, you have to keep pressing the space button. After the countdown for the brawl is over, you move on to the next level.

Click next for "The Ashes Cricket 2009", a boon for hardcore cricket enthusiasts with an interface reminiscent of the Brian Lara Cricket games 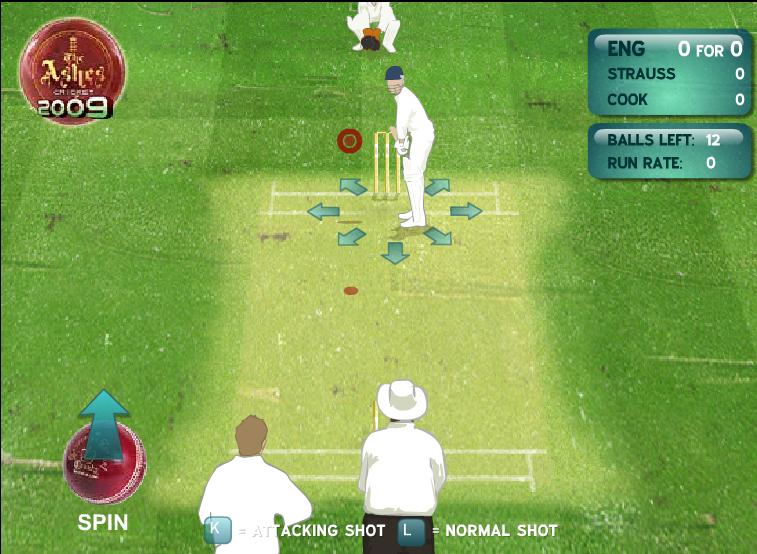 This Flash game is a boon for hardcore cricket enthusiasts. Although it is a 2009 game, any self-respecting cricket lover will like this game for the complete cricketing experience it provides. Unlike other games, this game allows you to bat, bowl and field as well as allow two players to face off each other in real time. The interface is reminiscent of the Brian Lara Cricket games that you played on your 16-bit Sega consoles.

As is evident from the name, Ashes cricket concentrates on two teams, England and Australia. Along with the normal Test game version it also has a high scoring game for those who are T20 junkies. Using the arrow keys and the buttons K and L you can decide the kind of shots you want to play or the amount of spin you want to enable. Even something like running between the wickets needs your command.

The gameplay is wonderful. The delay between deliveries is minimal and the red marker on the pitch will always keep you on your toes planning your next shot. All in all this game is highly engaging.

Click next below for "Stick Cricket", an addictive cricket game with a refreshing visual style.

This is another of the chase the target games. The selling point of Stick Cricket is that its players are made out of sticks and a sphere (for the head and the ball). It is a refreshing change from the other poor quality graphics that you get on cricket-based Flash games.

Gameplay is simple and somewhat addictive. The shots of the batsman are controlled by the W A S D or the arrow keys. The player has to strike the ball with the right timing, as there are no indications as to where the ball will land, as found in other games. So it's like playing in real life. The objective of the game is to chase the stipulated target in 10 overs. But with 10 wickets in hand, the score seems achievable. After winning one match, the target in the next match is raised by another 20-30 runs, and so on. Do look out for the antics of the bowler, who starts boxing the air after taking your wicket. With only sticks representing his body, this ritual will definitely bring a smile to your face.

There are many other games to choose from, we chose four games that are completely different from each other in terms of the look and feel of the game. So go ahead and enjoy a game of cricket yourself in between the IPL T20 breaks.