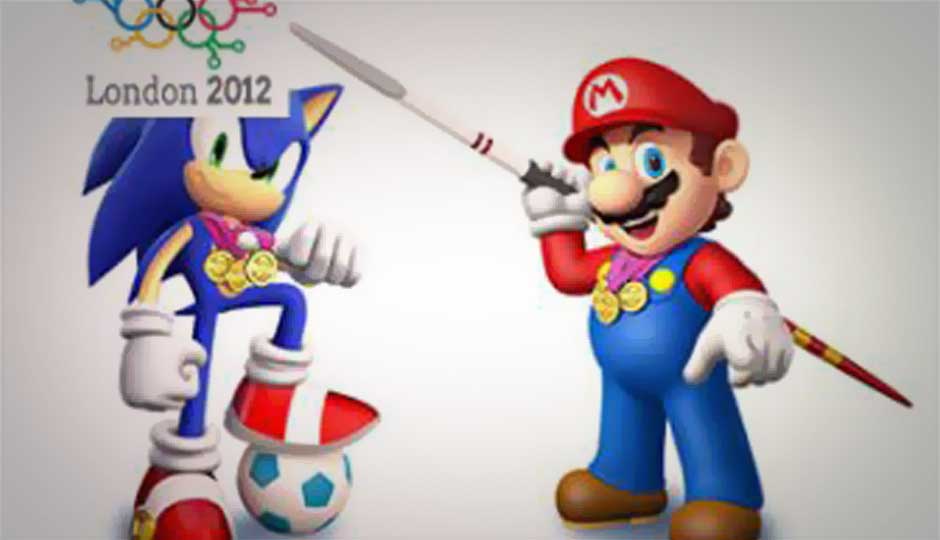 Not everyone can compete at the levels necessary to make the Olympics, but there have always been great sporting games that let everyone participate from their own living rooms. We take a look back at the best Olympic video games.

The world's eyes turn toward jolly ol' England on July 27th for the start of the London 2012 Summer Olympics. The honored and respected quadrennial international contest has a rich history of memorable moments and human drama that has made the event a must-see for sports fans and nationalists alike.

The Olympics have made an impact on home computers and video game consoles, too. Although Olympic video games lack wondrous people moments such as Michael Phelps winning eight gold medals in the 2008 Beijing Olympics or 1980's "Miracle on Ice," they gives armchair athletes the ability to make their own marks against smack-talking friends.

The video game industry has released numerous Olympic-themed games in its roughly 40-year existence (both officially licensed and non-licensed) games that let gamers participate in the hurdles, 100-yard dash, swimming, gymnastics, and other sports. Unfortunately, like other video games based on real-world properties, the quality of Olympic video games has been hit or miss—mostly miss. That said, there are a few golden gems in the muck that are worth a play.

The Olympic and Olympic-themed games in this roundup cover the computer and home video game console titles that are true representatives of the multi-sport event—no stinkers here. Their play styles, however, are radically different. Older games crafted with the arcade and 8-bit computers in mind are button-mashing and joystick-jiggling affairs that wrecked controllers; the most-recently released Olympic title utilizes Microsoft's revolutionary Kinect motion-controller for hands-free gaming.

As always, check out our slideshow below for commentary on the best Olympic games, and feel free to leave your own picks in the comment section. 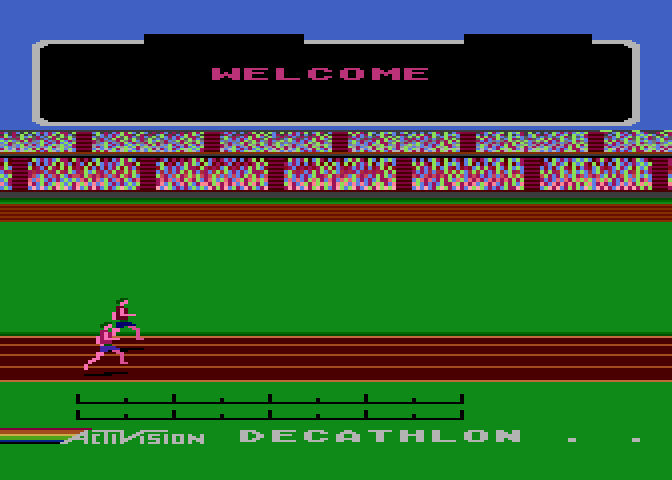 The Activision Decathlon's programmers (which included the legendary David Crane) must have been sitting on significant joystick stock. That's what immediately comes to mind when reflecting on this early '80s title which brought the high jump, 400-meter race, discus throw, and other contests to the ColecoVision, Commodore 64, and MSX platforms. The Atari 2600 version was a bastard of game that destroyed joysticks (and wrists) as gamers had to rapidly move their sticks left and right to run. Still, The Activision Decathlon is a title (somewhat) fondly remembered by the Gen-X set. 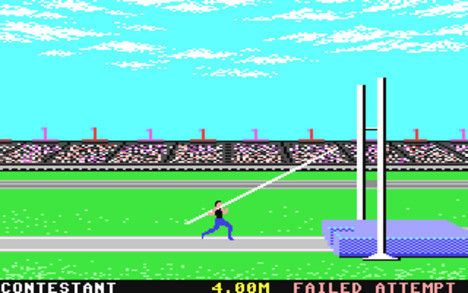 Summer Games was the first of Epyx' multi-sport competitive titles that were released in the mid to late '80s. Although Summer Games lacked an official Olympic license, the game packed several Olympic sports including pole vaulting, sprinting, skeet shooting, and more. The Commodore 64 version let gamers compete in even more events than the other versions as it let players link it to Summer Games II (released in 1985) to create a single huge event. 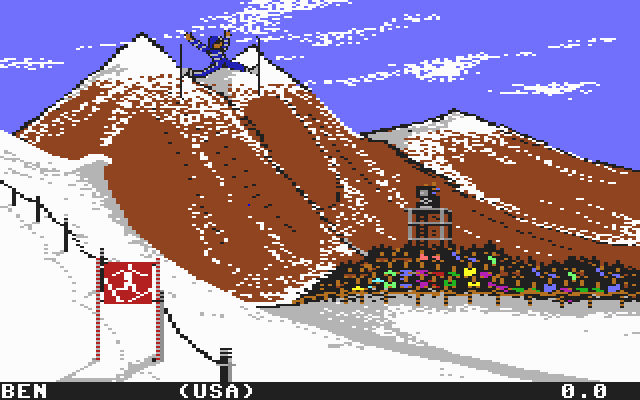 Epyx did more than replicate the summer Olympic Games. Winter Games, the developer's take on the Winter Olympics, also lacked an official Olympic license, but it was another excellent sports title for the Amiga, Apple II, Commodore 64, and home video game systems. Winter Games featured eight events, including the ski jump, luge, bobsled, biathlon, and other snow-and-ice competitions. 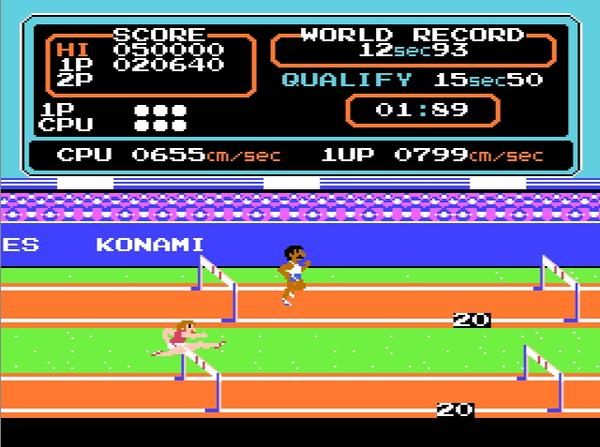 This is the game that gave an entire generation of kids hand blisters, sore fingers, and other nerd-specific injuries. Track & Field, Konami's first foray into Olympic-themed video games, was originally released in arcades in 1984, but ported to the Atari 2600, Commodore 64, NES, and other home computer and video game consoles. Players' race for glory saw them compete in the long jump, hurdles, javelin throw, and more. The NES version used a chip-tuned "Chariots of Fire" as its splash screen composition, a track used in the arcade version's closing credits. 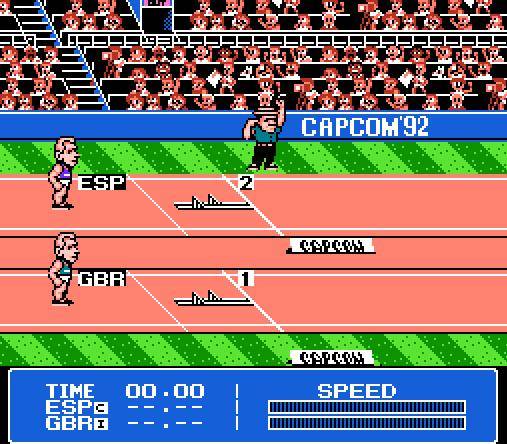 Released the same year as the Barcelona Summer Olympics, Capcom's Gold Medal Challenge '92 features over a dozen events including the long jump, 100 meter backstroke, weightlifting, and marathon. Capcom's Gold Medal Challenge '92's gameplay relies on heavy button-mashing, but unlike many other 8-bit Olympic-themed video games, it requires players to press the "B" and "A" buttons with a particular rhythm. The game's also well-remembered for its 8-player competition that inspired much smack talk. 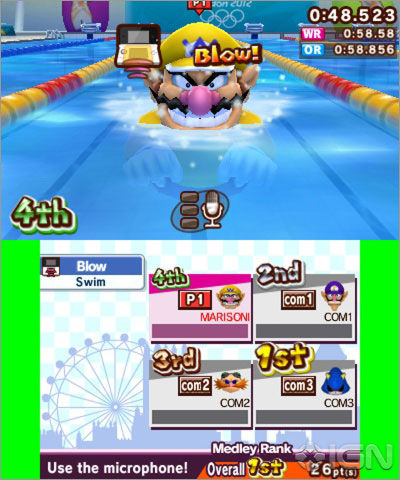 There was quite a drought when it came to memorable Olympic Games games, but the wait for a couple worth playing has ended just in time for the London 2012 Olympics with the inevitable video game tie-ins. This time, as in 2008, former rivals Nintendo and SEGA have collaborated on an arcade-style take on the ceremonies with the lengthily-named Mario & Sonic at the London 2012 Olympic Games. This Nintendo 3DS cartridge boasts over 50 competitive events starring the plumber, the hedgehog, and several of their friends, rivals, and enemies. There's lots of competitive fun in the single or multiplayer modes, but the overly simplistic versions of some events dulls the experience a bit. 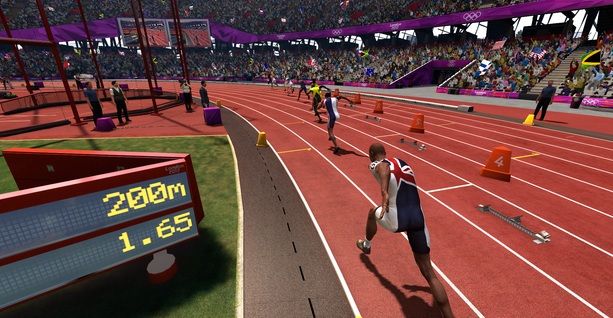