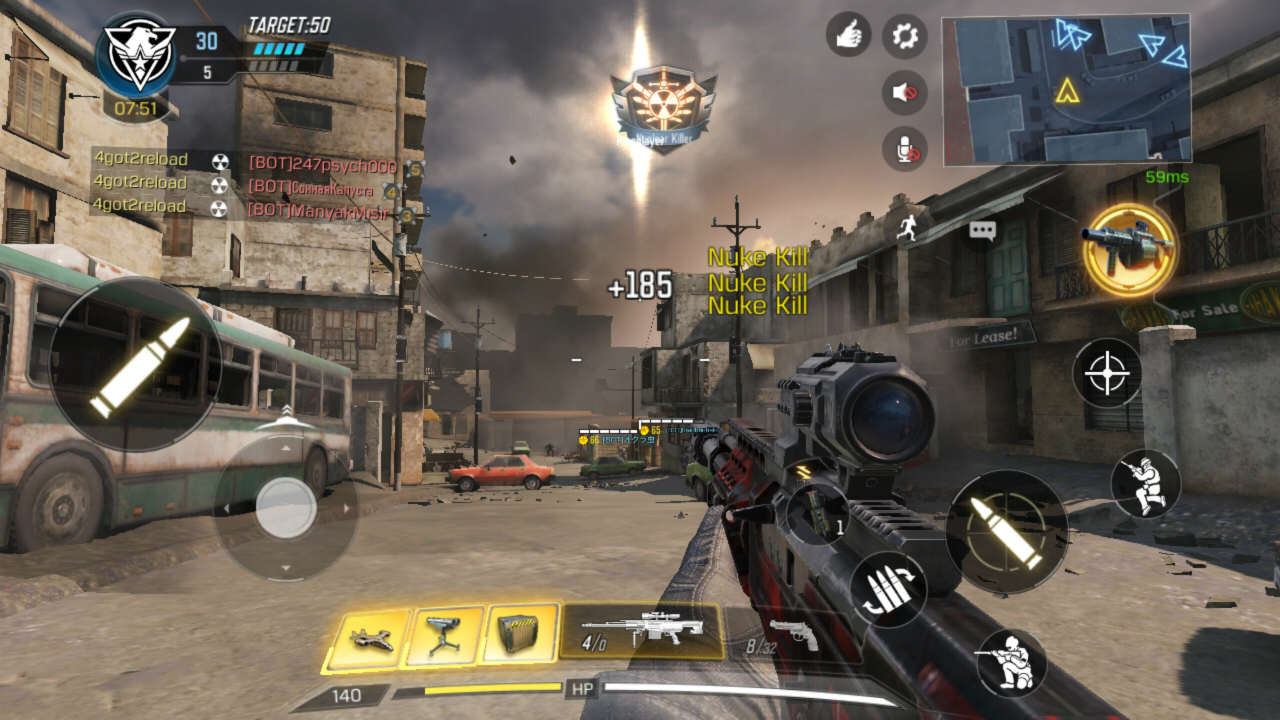 Everything you need to know about Scorestreaks in Call of Duty: Mobile

Everything you need to know about Scorestreaks in Call of Duty: Mobile

Call of Duty: Mobile’s Scorestreaks are your reward for playing well. They offer tools that can help you turn the tide of the match. Whether it's by revealing enemy locations on the map, placing an automated sentry turret, or calling in a helicopter to attack enemies. However, these rewards aren’t given out for free and players will have to earn them. Also note that you need to be at a certain level in order to unlock them, while three are available to the player from the beginning. Since it's launch, the game has offered a bunch of new scorestreaks. These are unlocked either by completing events or by buying them from the Credit Store.

A player can equip three Scorestreaks at any given time. Each Scorestreak costs a certain amount, and when a player reaches that score, they are rewarded with it. However, the score is only valid for the player's current life. If the player is killed, the Scorestreak is reset and the player will have to start over. However, those with the Persistence perk will not have their Scorestreak reset on death. But the costs will be doubled.

Now that that’s out of the way. Let’s take a look at all the Scorestreaks available in Call of Duty: Mobile. 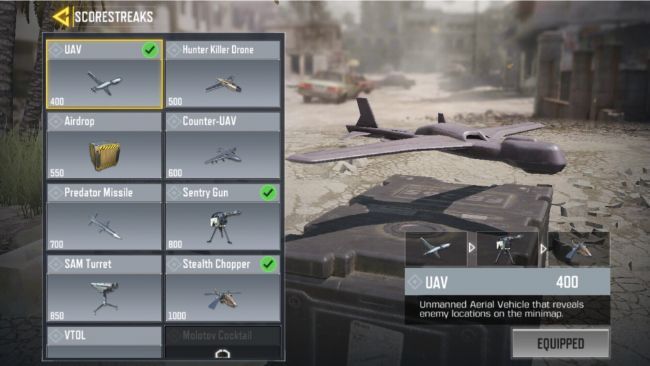 The UAV is one of the first Scorestreaks that the player gets and is quite useful. For a start, it reveals the location of all the enemies on a map temporarily. So you can plan an ambush or pick off stragglers. Second, it doesn’t require too many kills. So it is easy to call on. Do keep in mind that it does not reveal the elevation of the enemy, so it is possible that the enemy may be above or below you. 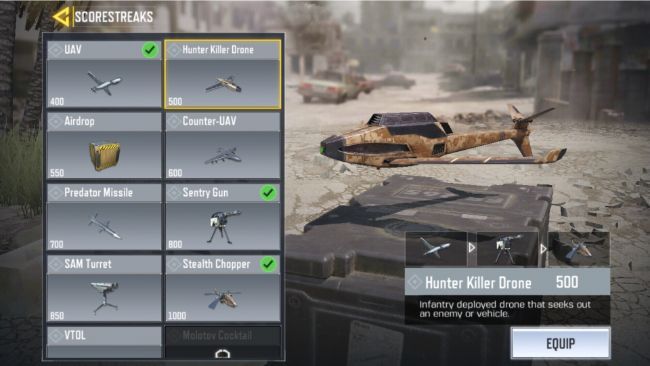 In-game description: Infantry deployed drone that seeks out an enemy or vehicle

The Hunter Killer Drone is launched manually, and it seeks out an enemy. It then drops down on the unfortunate victim and explodes. It should be noted that the explosion can take out multiple players. It should also be noted that it is possible for players to dive behind cover and avoid any damage. 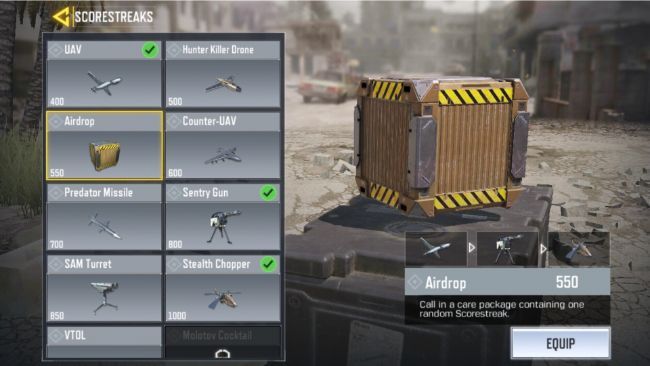 This does exactly what it says on the tin. It calls in a helicopter, which then drops a care package, which can then be opened to get a random Scorestreak. This could be anything from a UAV drone, to a VTOL gunship. In order to use it, players will have to drop a flare, which marks the location where the package will be dropped. It should be noted that the helicopter carrying the package can be shot down. 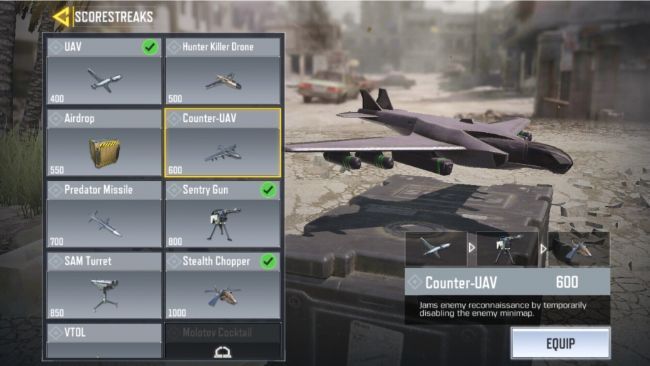 By temporarily disabling the minimap, the Counter-UAV effectively blinds the enemy by robbing them of any spatial awareness. So when it’s active, you may want to consider flanking the enemy. 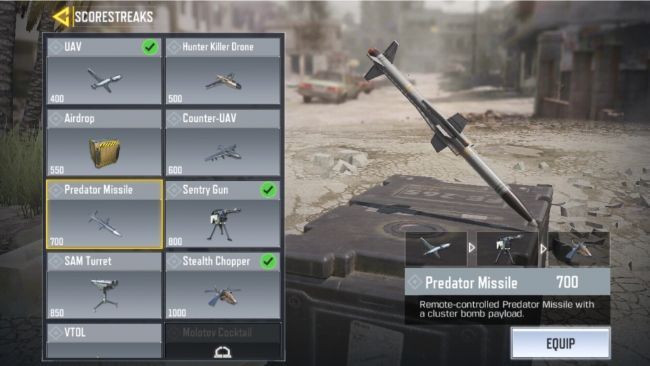 The Predator missile is one of the first Scorestreaks players get access to. When activated, players get a first-person view from the missile itself as it slowly makes its way down and explodes. Enemies are highlighted in red, while the player character is marked in green. Aim for groups of enemies for maximum damage. 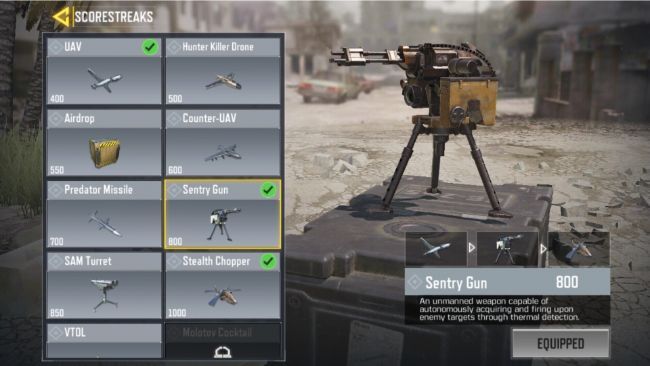 The sentry gun needs to be manually placed in a location. But once that is done, you can pretty much forget about it. It automatically detects and attacks targets. And since targeting is thermal-based, a Smoke Grenade will not help. It is best used at choke points where enemies won’t be able to flank and destroy it. 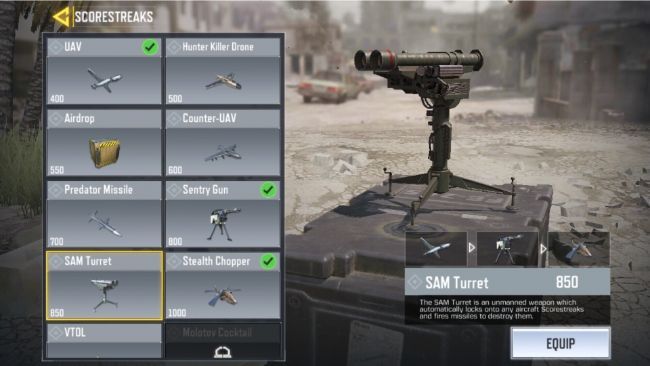 In-game description: The SAM Turret is an unmanned weapon which automatically locks onto any aircraft Scorestreaks and fires missiles to destroy them.

The SAM Turret has minimal offensive capabilities, but it is very handy and negates the enemy’s aircraft Scorestreaks like the Stealth Chopper and Care Packages. Since it does not directly attack enemies, it can be easily destroyed. 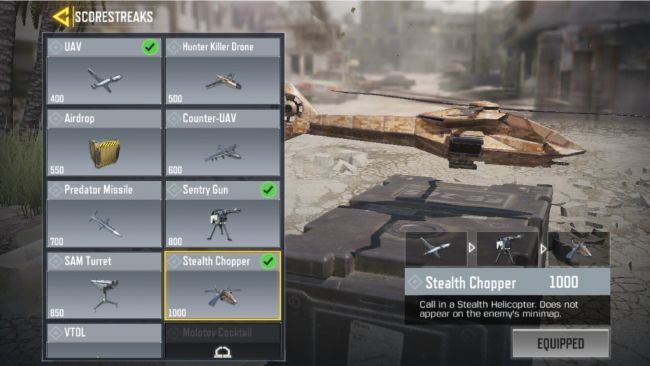 In-game description: Call in a stealth Helicopter. Does not appear on the enemy’s minimap.

When you activate the Stealth Chopper Scorestreak, you will have to manually mark where you want the helicopter to patrol. So ideally, you pick a place that is close to the enemy base. The helicopter will then start patrolling the area, picking off the opposing team one by one. It should be noted that while the helicopter does not appear on the enemy’s minimap, it can still be targeted by the SAM Turret. 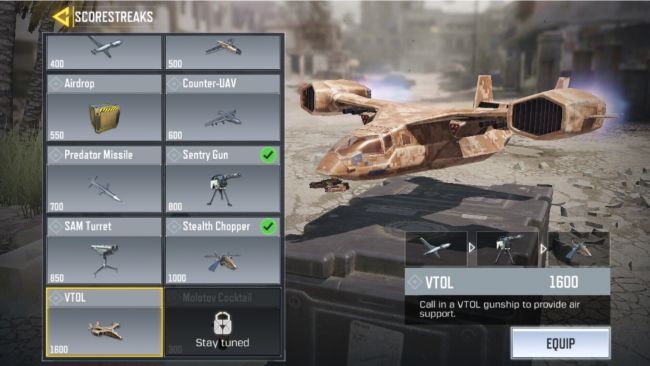 The ultimate Scorestreak. This calls in a VTOL gunship that hovers above the battlefield. You get to control the turret, which packs two grenade launchers that you can then use to rain down explosive ammunition. The opposing players are marked in red, so they cannot hide. Just make sure you don’t accidentally hit the player in green because that is you. 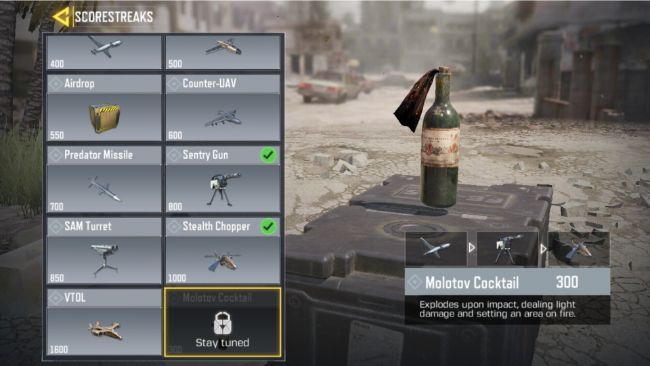 As of writing this piece, the Molotov Cocktail is still locked and not yet available. When it does become available, it will be the cheapest Scorestreak out there. Judging by the description, this Scorestreak may act like a grenade, which also temporarily blocks the enemy from accessing an area.

In-game description: Use a drone to detect and eliminate enemies while it has power and ammo. It carries three infrared explosive probes

The MQ-27 Dragonfire is a small drone that is very useful as a supporting scorestreak. When activated, the players take control of the drone, so players should find a secluded spot before turning it on. When activated, the player can see all players on the map and can fire small infrared darts that can real the exact positions of enemies to all teammates for a few seconds. The drone has limited range and power, so that has to be kept in mind by the player. Further, once the three darts have been used or power has been exhausted, the control is returned to the player.

In-game description: Call on an XS1 Goliath to equip powerful armour and a minigun with limitless ammo.

The XS1 Goliath calls upon a mech suit from outer space. So it definitely wins on the coolness factor. The suit grants players a lot of hit points and equips them with a minigun with infinite ammo. However, the gun will overheat when used continuously, so players will have to use the weapon in bursts. Further, the weapons can be very inaccurate when fired from the ‘hip’. So players are advised to ‘zoom in’ before firing. Further, it should be noted that once the player dons the suit, the use of their own weapons, grenades or other scorestreaks are disabled. Further, players will not be able to crouch or go prone. Also, the Goliath will most likely draw all the fire from enemies, so it’s best used in narrow corridors when enemies won’t be able to sneak up on you.

In-game description: Detects nearby enemies and paralyses them in a continuous electric shock

The Shock RC is a ground-based remote control vehicle that will automatically seek out enemies to shock. It can shock up to two players at a time, leaving them at the mercy of you or your team. It should be noted that since the vehicle automatically seeks out enemies and that you can see it through walls, its a great way to track any nearby enemies who are in hiding. However, when following the vehicle, make sure you don’t leave yourself open to gunfire. 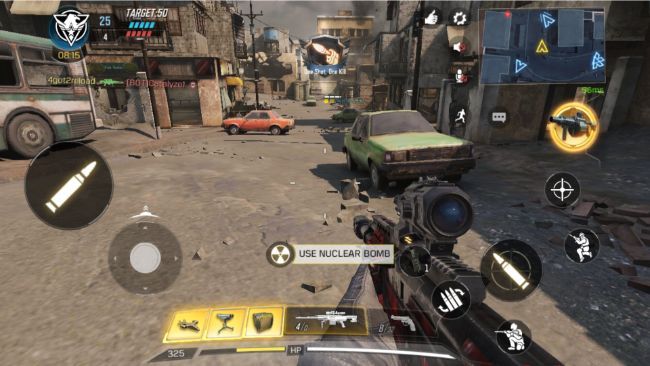 Unlike other scorestreaks, the Nuke is not equipped in a loadout and getting it is not connected to your score. Rather, players need to get over 20 kills without dying. Also, these need to be done through your weapons only. So kills using other scorestreaks are not counted. However, unlike other Call of Duty games, using the nuke does not end the game. Rather, it just kills all the enemies on the map. A little anti-climactic if you ask me...

In order to get the most from your Scorestreaks, equip those that make the most sense to you and your playstyle. Experiment with different loadouts to see which one best suits your style and abilities. If you are skilled enough to rack up the kill count, then high-level scorestreaks might be best for you. If you tend to rush in to get a quick few kills only to die, then you might consider low-level streaks. You should also consider Persistence and Hardline perks that may also help you with getting Scorestreaks.