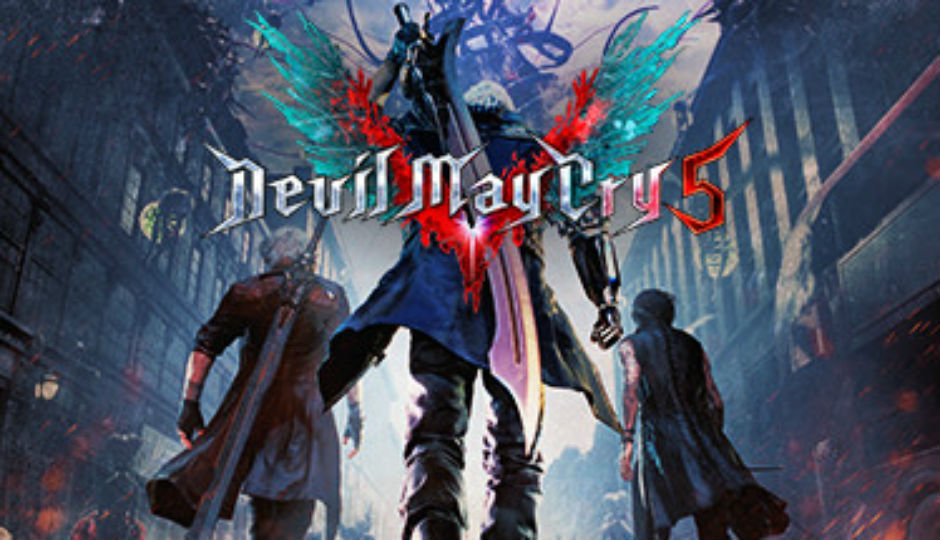 Devil May Cry 5 review: Fast-paced over the top action!

Devil May Cry 5 is a sequel to Devil May Cry 4 and negates the activities of the 2013 DmC reboot. The game is available for the Ps4, Xbox One and PC.

Released in 2008, Devil May Cry 4 was a game that was received with a lot of praise and fanfare. At the time, I was graduating college and saving money to pick up a PS3, so unfortunately, I missed the game. I have played Devil May Cry games in the past but they never stuck with me. Not until I realized that DMC was the source of inspiration for one of my favourite franchises - God of War. Fast forward to 2013 and I had a chance to review the DMC reboot. Despite getting a backlash from fans, I quite enjoyed the game. It was also one of the first times I enjoyed showing off my gaming skills by aiming for the S rank and showing my friends I was a force to be reckoned with when it came to fast-paced action games. Now, in 2019, I had the opportunity to review Devil May Cry 5. Since I am new to the story of the game, I will tell you whether it is one that will appeal to newcomers and whether the fast-paced action is challenging.

The way the story is presented is very interesting. It is in a nonlinear manner, beginning in the middle of a battle and then going back to the start of the game to explain what the hell was going on and then ending with a bang. The story of the game follows three protagonists - the legendary demon hunter Dante, the not so legendary demon hunter Nero and a new character all together called V. Dante has been hired by V to eliminate a demon that's running amok in the city and as expected, things go out of control, Dante is defeated and it is up to V and Nero to try to sort things out. Dante then returns in the nick of time and we see the kind of predictable twist in the plot at this point. 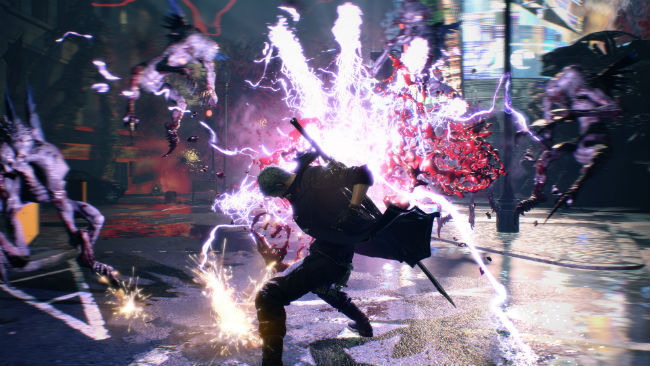 Overall, the story of the game is quite cheesy, but the game is so much fun that you don't mind sitting through the gorgeous cutscenes and listening to the cheesy dialogues. At one point Dante pulls off some dance moves that pay homage to Michel Jackson and it is really cool.

Overall, the story of the game is cheesy and if you are one who is interested in the lore of DMC, then you will enjoy it. For newcomers, there are references that you may not get. But thankfully, the game has a recap that you can watch that will explain key events in the life of the demon hunter putting much of your queries to rest.

60fps on a console! The smoothness of the game is the first thing that will stand out once you fire up the game. If you have played an action-adventure game in the past, you will feel right at home with Devil May Cry 5. The best part about the game is that you have three different playable characters, each of whom bring something unique to the table. 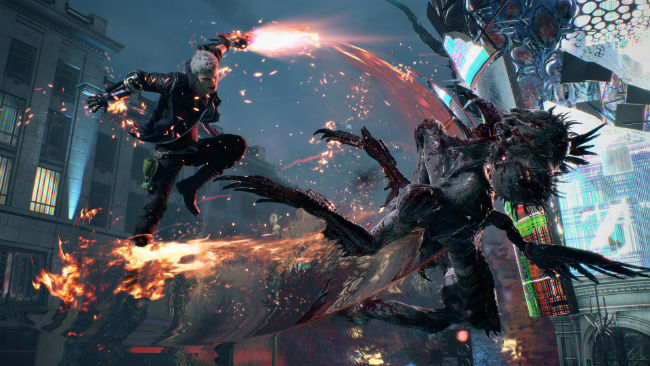 Kicking things off with Nero, he has a gun and a sword as his basic attacks. But he also has a mechanical arm that can perform a series of functions. You have a number of arm attachments at your disposal. One can blast enemies, the other acts as a machine gun and there is one that was originally designed to eat spaghetti but you can imagine the effect it has on the demons. The arm can shoot out like a rocket and hit your opponents as well. Nero’s arm can give the mechanical arm from MGS V a run for its money. You can carry up to 8 arms once you've unlocked capabilities and there are quite a few arms to equip Nero with in the game. The rest of Nero’s combat is close quarters mixed with aerial manoeuvres.

Dante has quite the mix of weapons at his disposal. From 2 different guns to his trusty sword, gauntlets and a bike that splits into 2 to become a weapon. I personally found Dante’s combat to be more versatile than Nero through my playthrough, but that's just me.

Last but not least, we have the new mysterious character V. His gameplay is completely different from the above two. As V, you spend a lot of time away from your enemies commanding a falcon and a panther to do your bidding. The catch is that the final blow can be delivered by V only to kill a foe. Your allies can only do damage. You can also summon what I can describe as a rock monster who looks like he could be one of the bosses in Shadow of the Colossus to aid you in battle. 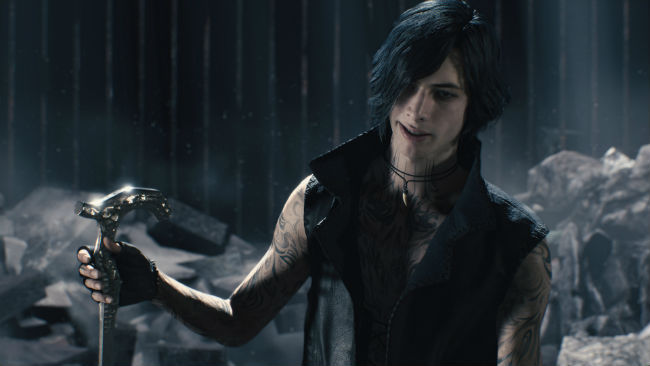 The beauty of the combat in DMC 5 is that it is easy to learn, relatively easy to master but tough to get the SSS rank in combat. Thankfully, for noob gamers, there is an auto mode where the character will perform a series of stylish actions and all you do is button mash. It is very reminiscent of what we saw in Nier Automata and a welcome feature for new gamers.

The game also has a few puzzles to break up the pace, but they are as simple as going to the next room and pulling a lever or destroying an obstacle to progress.

The only downside to the game is that there are a lot of loading screens. The game as phone booths using which you can call upon the Devil May Cry van and use it to upgrade your character. Every time you enter or exit the van there is a loading screen. And it may not sound like much but in the middle of gameplay, the loading screens can get very annoying.

Overall the gameplay is a lot of fun. The game can be beaten in 12 to 15 hours but it feels shorter than that because it is a lot of fun. Hours feel like minutes once you get immersed in the combat of the game.

Considering the game runs at 60fps on consoles, we thought there would some visual compromise. Now, the game is no God of War visually, but it isn't a slouch either. The cutscenes in the game need special mention as they look nothing short of a CG movie. The environments, though small arenas in which you battle, are a great representation of a world overrun by demons. 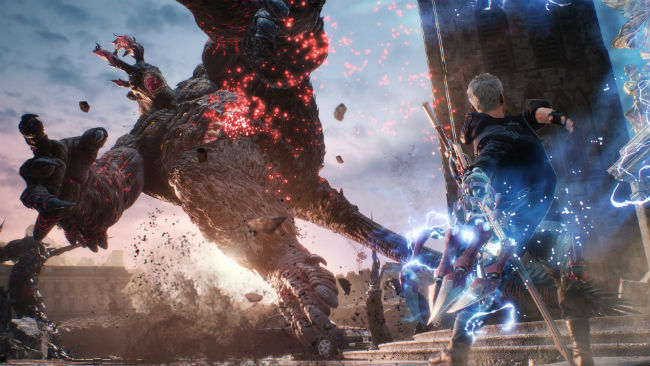 The movements of the characters in the game are also fluid. From the ability to sprint through environments to the animations in battle and even the change in animations in different attacks, the game looks fluid. The game's environments have a slightly muted tone to them in terms of the colour pallet but it is offset with the vibrant colours produced during gameplay.

The diversity in the environment isn't much as you are in the city for the first half of the game and another environment in the second half (I don't want to disclose it).

Cheesy voice acting is the first thing that comes to mind when you play the game. Not sure if this is the way the developers intended to write the game or is it because of translation but the game has some really cheesy voice acting. Mostly it will make you laugh. There are a bunch of serious moments in the game when getting into certain details of the story but for the most time, this is a game that will make you chuckle with its voice acting. 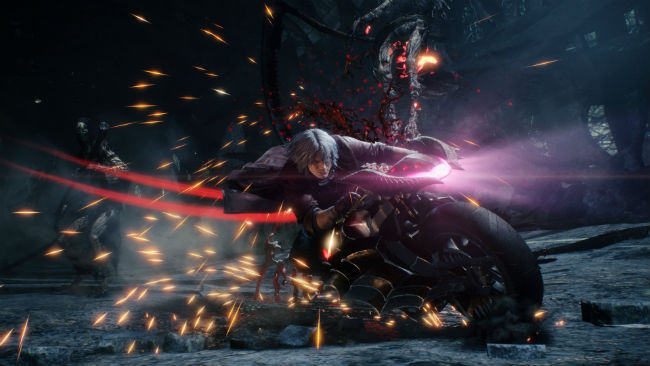 The background score is one of the best I have heard in an action game in the recent past. It has rock music in the background with subdued vocals and as the battle heats up, the vocals become more prominent. This is a simple thing with the background score but something that comes to your attention when you get engrossed in the experience.

The swish of your sword, the bangs of the guns and the grunts of the demons, all blend seamlessly to give you an exhilarating experience. This game sounds fantastic on a pair of good speakers or headphones.

Devil May Cry is for those that love fast-paced action games mixed with slick moves and the ability to rack up combo after combo. The gameplay is addictive and a lot of fun. The story is quite entertaining and the twist in the story will appeal to those that enjoy the lore of the franchise. You can go back and play any mission you want once you have completed it to master your skills. The only downsides are the tedious loading screens which can get very annoying.

We played a review copy of Devil May Cry 5 on the PS4 Pro.