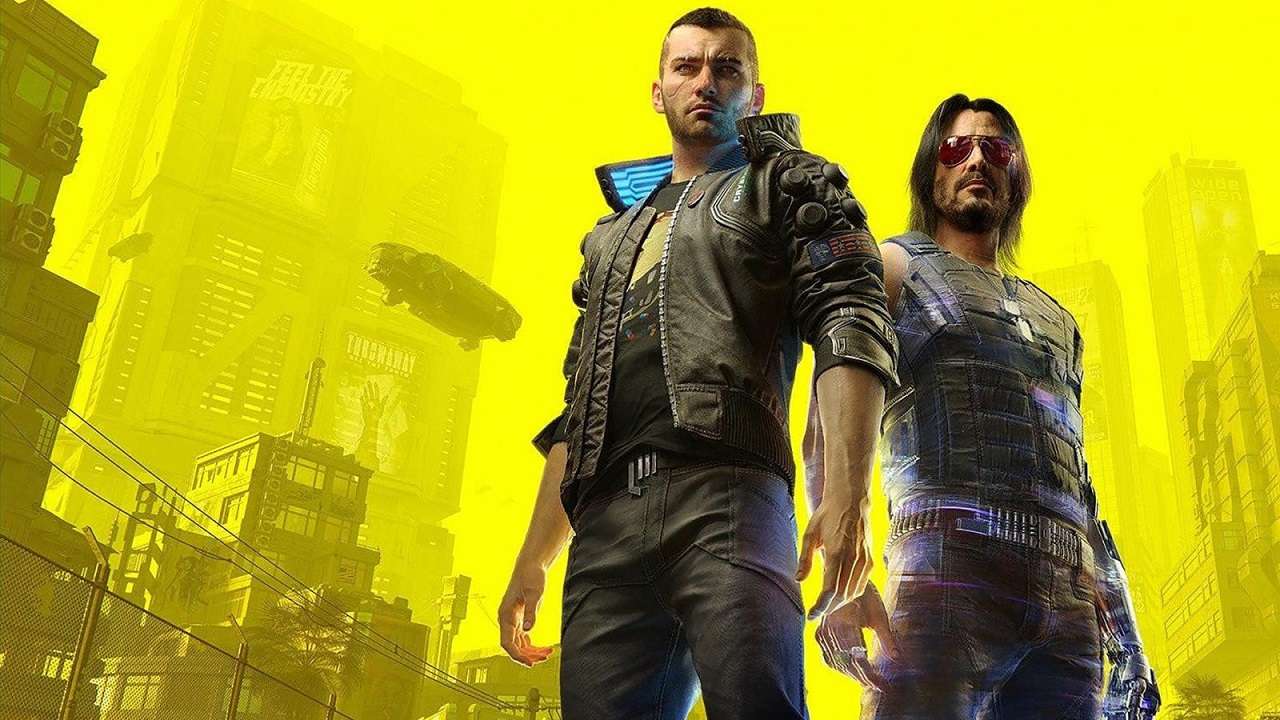 Playing Cyberpunk 2077 on the PS5: The Good, the Bad and the Ugly

We played Cyberpunk 2077 on the PS5. The game has received rave reviews on the PC but is a lacklustre experience on the PS4 and Xbox One. We played the game on a PS5.

"A delayed game is eventually good, but a rushed game is forever bad," - Shigeru Miyamoto

Just let that quote from a gaming legend sink in for a minute. How many times in the past have we witnessed the downfall of a great game at launch because it was half-baked, wasn’t ready, or simply rushed? Anthem, Fallout 76, and No Man's Sky are just a few examples of games that were a disaster at launch. While Fallout 76 and No Man's Sky were eventually fixed, we're still waiting for the rebirth of Anthem. Today we are here to talk about Cyberpunk 2077, the most anticipated games of 2020. Despite multiple delays, Cyberpunk 2077 had a rough launch, to the point that it has been removed from the PlayStation Store. While the game works great on a gaming PC, we're here to tell you what the experience is like on the PS5. 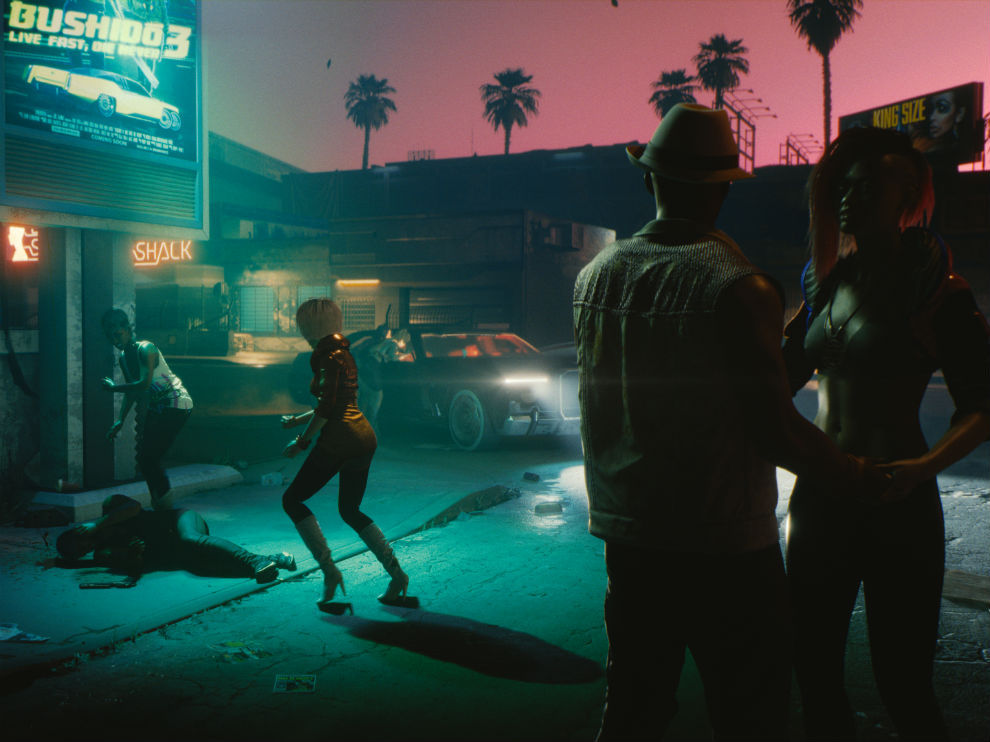 We played the game on a PS5 and the first thing to note is that it is a PS4 version of the game available on the new console thanks to backward compatibility. We installed the game on the PS5’s internal SSD and this is our experience of the game — the good, the bad, and the downright annoying.

The game took 7 years to develop by a studio that has a stellar reputation in storytelling — CD Projekt Red. The Witcher 3: Wild Hunt is not only one of the best games of the last generation but the way in which the story is told is engaging, and with multiple endings and numerous choices, no two playthroughs are the same.

The same can be said about the story of Cyberpunk 2077. While the opening life paths give you a different entry into Night City, you eventually come to the same path of stealing a chip with Johnny Sliverhand AKA Neo AKA Keanu Reeves’ consciousness combining with your own. It is this journey that will take you tumbling down the rabbit hole in a plot that I mostly enjoyed. The multiple endings do warrant another playthrough of the game and it's also worth checking out the various options that open up due to the different life paths presented in the game. 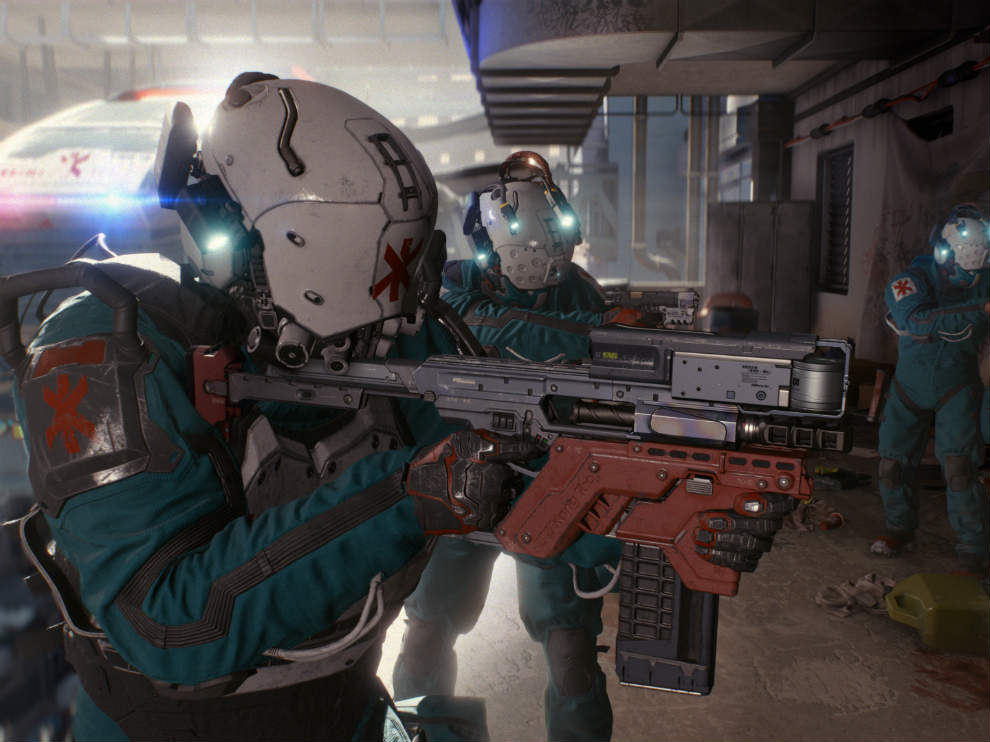 While the world still feels like a videogame world, it is filled with side quests and things to do that will keep you busy for hours before you decide to take a break from the story. I’d recommend you do the side quests as much as possible because they'll not only lead you to the better ending but also help you level up your character faster.

The sound design on the game deserves special mention. From the bustling city to the rock music that engulfs the background score in the heat of battle, the soundtrack of Cyberpunk 2077 is up there with the likes of Doom Eternal (review). The voice acting is fantastic too. While we have Keanu Reeves delivering his standard slightly-stiff-yet-expressive style, it is the lead protagonist and some of the supporting characters that deserve special mention. Needless to say, if you enjoyed the storytelling of the Witcher 3, this one is definitely up your alley.

The game may have received criticism for being a first-person game, but the one thing I love seeing from the first-person perspective are the gun animations. From reloading a handgun to simply putting shotgun shells in a shotgun, and even reloading different assault rifles, these animations are sublime, unique and have the same effect on me as Kratos recalling the Leviathan axe in God of War. One of my favourites is the way Johnny Silverhand handles his guns, but let’s leave that for you to experience. 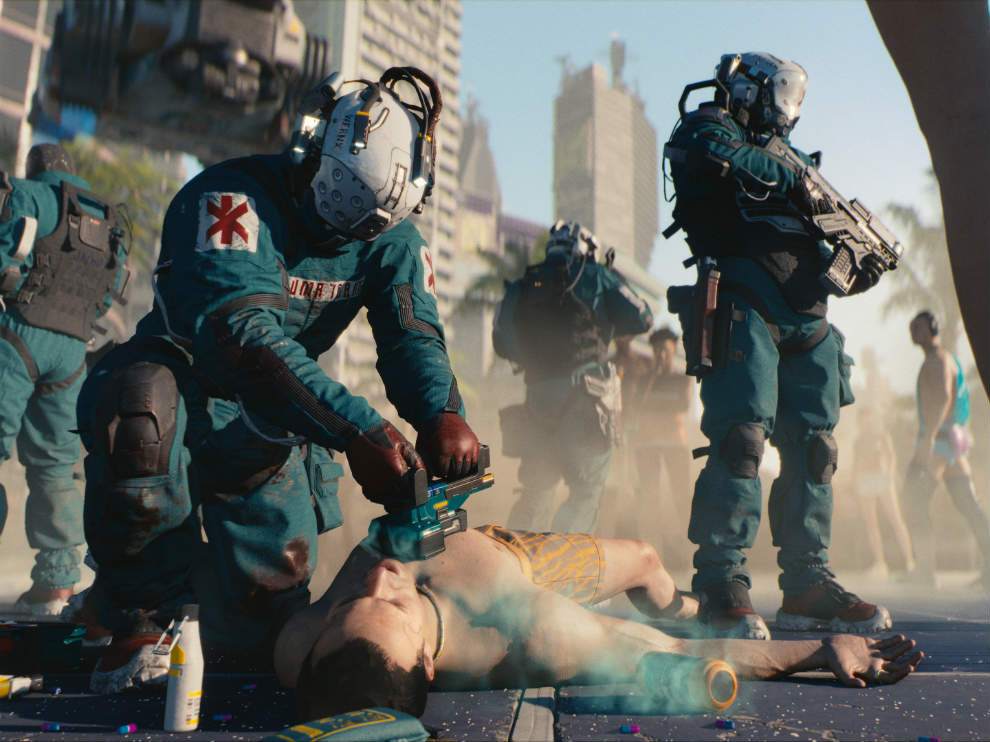 The load times on the PS5 deserve special mention. 15 seconds from a cold boot and 10 seconds or less when you die or fast travel. Say goodbye to long loading times.

Overall, be it the narrative, the gunplay or even exploring the world, Cyberpunk 2077 is a joyride. But it’s not all perfect.

The game is broken. There are no two ways about it. We’ve seen the memes of glitches and bugs but that’s just the beginning. What’s awful is the resolution and HDR on the PS5.

Let’s start with the resolution.

There are times when the faces of characters and the environment just look blurry. We know this because when you are up close with a character and see all the details during a cutscene or in an area that doesn’t demand too many resources from the console, they look detailed and rich. Then jump into the open world with the same character on a mission, and you will see them in their low-resolution avatar, and it just puts you off. Not because the characters look low-res for those 20 minutes, but because you’ve seen the potential. 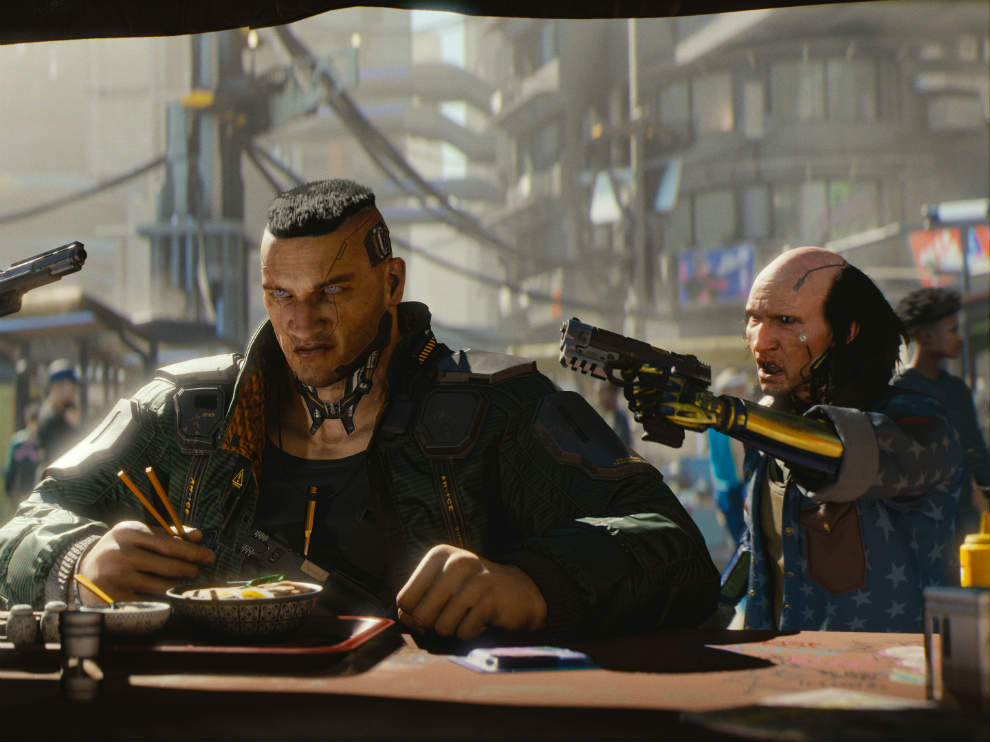 The HDR on the PS5 is off by default which it shouldn’t be as the console is always in HDR mode by default on compatible TVs. Switching the HDR on in the game improves the image but only slightly. It’s as though the HDR isn’t properly implemented on the PS5 in the game. Changing the peak brightness in the settings has little effect in the game. The blacks don't look deep nor do the highlights bring the desired dynamic range. It’s better to play the game in SDR on the PS5 (change the PS5 settings first) till the game is fixed. We played the game on the PS5 connected to the LG B9 OLED TV.

Even with the above issues, the game is still playable on the PS5 for those that can’t wait for the many fixes and the native PS5 version coming in 2020. But what really put me off was a bug at the beginning of the game. When I started playing the game, I chose the Corpo life path and from the get-go, started doing as many side missions as I could before tackling the story of Act 1. After talking to the Militech agent, you are supposed to meet Jackie outside All Foods. The route to Jackie did not appear on the mini-map. One quick Google search and the possible solution for this known bug was to fast travel a bit, do some side missions and keep checking regularly by selecting the mission from the menu. But to no avail. After more than 2 hours of doing this, I finally gave up and started the game from scratch again, this time selecting the Street Kid life path. Lo and behold, the mission ran smoothly this time.

The other problem which removed me completely from the game was that it crashed almost every hour without fail. The fastest way to crash the game was to travel from one district to the other, wait for a fixer to get in touch with you and the game crashes. I’ve lost count of the number of times the game has crashed on me. 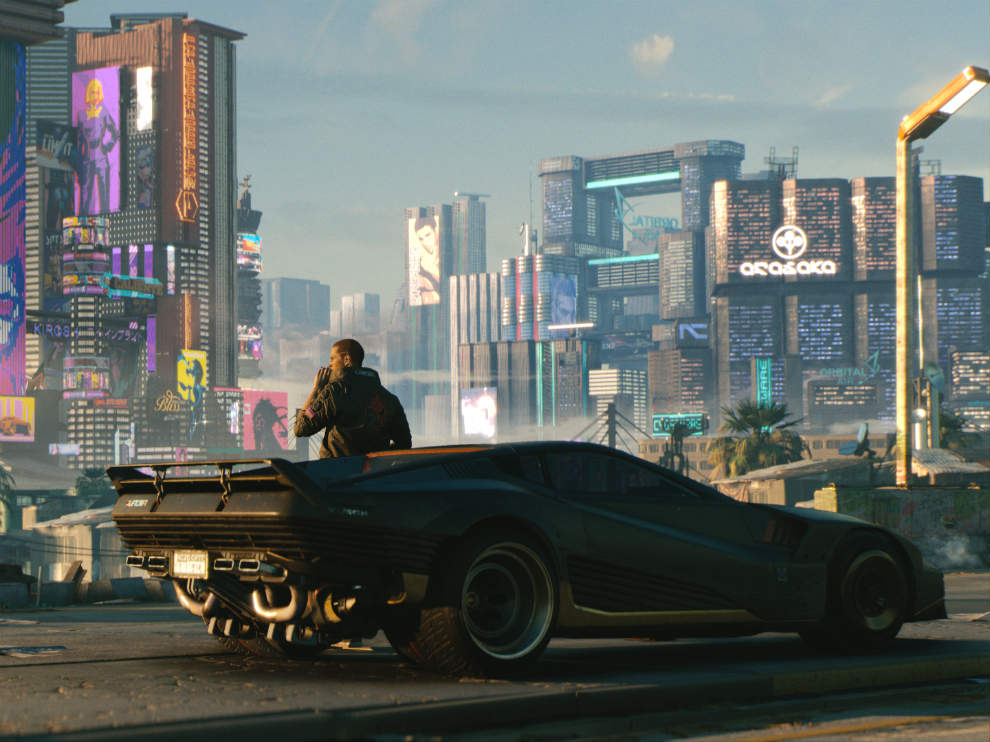 While I see the potential of the world, the depth of the story, and the love and attention to detail that the developers have put into this game, I cannot help but ask you to hold off just a bit longer. In your own heart and mind, think the game has been delayed for another 6 months. Hopefully, by then, the game will return to the PlayStation Store, and we could possibly have a native PS5 and Xbox Series X version.

Considering the immersive sounds of the bustling city, incredible background score, and diversity in weapons, I can't wait to see what the developers have in store for the 3D audio and adaptive triggers of the PS5. Until then, know that Cyberpunk 2077 isn't as breathtaking as promised.