When you’re playing video games, having a good headset improves immersion and your overall experience. In order to do so, you’ll have to go for one that delivers high quality audio performance and a satisfactory level of comfort. Since it’s specifically about gaming, a microphone also becomes important for people playing multiplayer games. There are many options out there but there’s usually a compromise on some aspect. Out of all the gaming headsets we tested at our labs, the following are the best that you can buy. 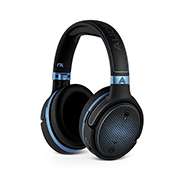 Gaming headsets usually incorporate dynamic drivers to deliver audio. But Audeze, manufacturer of high-quality audio products think that they deserve more. So, they came out with the Audeze Mobius, the world’s first gaming headset with planar-magnetic drivers. This takes the audio quality to a completely different level and miles away from the competition. You won’t only enjoy gaming on this headset but watching movies will be a different experience. It also incorporates a feature to track your head movement to fix the audio source in front of you. Even if you move your head or turn, the audio source stays in the same location. Apart from connecting to your PC or laptop, it can also be connected to your mobile devices. The only downside to this magnificent gaming headset is its price but considering everything it offers, it’s worth it. In 2018, the Mobius won the Digit Zero1 Award for gaming headsets.

Wireless gaming headsets are incredibly convenient. The Corsair HS70 Wireless is comfortable, lightweight and produces brilliant audio. It charges over a micro-USB to USB Type A connector included in the package. Bass response is decent enough for immersion and it doesn’t overpower the other sounds. Microphone performance isn’t the best since it sounds flat and there’s some noise to it as well. The mic arm is bendable and detachable. You can use the headset for your gaming, movie watching and music listening.

Probably the headset that is the closest to a neutral sound signature among the rest in this list, HyperX manages to offer a wonderful gaming headset with the Revolver S. In gaming, not only do the sounds of vehicles, gunshots and explosions deliver the heavy punch, footsteps and voice sounds crisp as well. Since the signature is almost neutral, the music listening experience is satisfying as well. The microphone performance could have been better but it’s good enough for competitive matches as well. Overall, the body of the headset is comfortable and it has a dongle to simulate 7.1 surround audio as well.

More of a mid-range offering from Logitech, although with a high price, the G433 is another gaming headset with an almost neutral sound signature. So, naturally, whether it’s gaming, music or movies, all of them are enjoyable. The detachable microphone performs great as well. Whether it’s comfortable is subjective because of the fabric used in the earcups. Fortunately, they’ve packed an extra pair of earcups with a smoother coating. The headset can be connected to your PC, gaming consoles and mobile devices.

HyperX’s Cloud series of gaming headsets have always been considered to be among the best in the market, especially the Cloud II. The latest from the series is the Cloud Alpha that sports a slightly updated exterior design with a complete overhaul in the interiors. Using a dual-chamber design, HyperX claims to have separated the bass frequencies in one chamber whereas the mid and high frequencies in another. This should prevent any kind of overlap of the sounds so that there’s more clarity across the entire sound range. Audio performance is as good as the Cloud II with an impressive microphone. The body is lightweight and you can play games for long hours.

Another headset belonging to the entry-level segment, the ASUS Cerberus V2 can be a great choice for your gaming needs. With enough cushioning over the earcups and headrest, the headset is incredibly comfortable for long gaming sessions. Audio performance is suitable for every game genre. The drivers deliver a warm sound signature that’s suitable for gaming and watching movies. It’s the microphone that has a slightly lower volume and also sounds flat. However, it’s good enough for online gaming.

The second wireless gaming headset in the list, SteelSeries has ticked off all the features you’d want on a gaming headset. From a hardware and software point of view, the Arctis 7 gives you all. This is the flagship headset of the series. It has a bright sound signature so you won’t get the punchy bass. However, it’s not disappointing at all. Being bright, the sound of vocals are enhanced including footsteps, so there’s some advantage to FPS games. The retractable microphone quality is brilliant and it’s good enough to be even used to record voiceovers and during livestreams. You can customise the sound and play around with different settings in the SteelSeries Engine software. While there are many features with a good build quality and connectivity options, the Arctis 7 is quite expensive.

ADATA’s gaming brand XPG had silently launched a gaming headset equipped with an external amplifier. If you haven’t heard of it, the EMIX H30 is a rather big headset with 53mm drivers. The bass response can be overwhelming at times where the drivers can literally vibrate during explosions or heavy gunfire. It also comes with an external amplifier, the SOLOX F30, that can be connected in between to deliver more power. You can cycle through the different audio profiles on the module according to your needs. The microphone is a let down since the volume is low but it can be raised using software. For your gaming needs, the overall package is a great deal.

Entry-level gaming headsets might not offer the best build quality, comfort or audio performance. However, the Zebronics Orion was a complete surprise, especially its microphone quality. It sounded natural without any kind of distortion and even added a little reverb to the voice. Sometimes, we don’t even get to see such a level of quality in premium headsets. Coming to the audio performance, it’s decent but doesn’t offer much immersion and bass. It is comfortable but it doesn’t have a snug fit over the head. At this price, the Orion is a great buy.

Just like its gaming mice and keyboards, Razer is also popular with gaming headsets. The Kraken has been there for a long time and now the V2 is an upgrade of the original model. Available in two variants with a USB and 3.5mm audio connector, the Pro is the latter. The Pro V2 has a sound signature similar that’s balanced for gaming and music. Don’t expect punchy bass but there’s enough to feel the low frequencies. The retractable microphone works quite well and it could have had done with a little more gain to it. You can wear the headset for long gaming sessions since the padding over the earcups and headrest have enough cushioning.