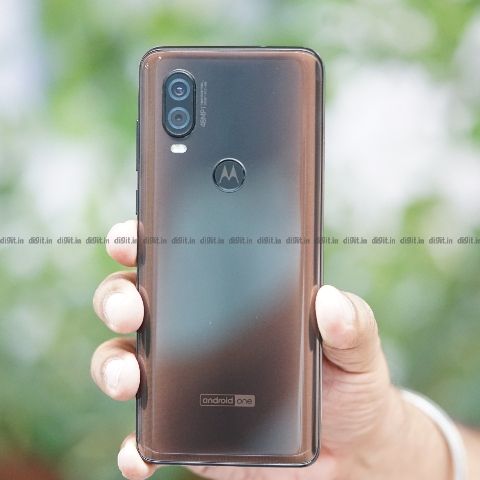 The Motorola One Vision attempts to solve the pain-point of good imaging and a good display and in that, while the One Vision's display takes time to get used to, it's actually quite helpful in both ergonomics and visual experience.The One Vision's camera however is largely inconsistent especially while shooting under tricky conditions, but it does have one of the sharpest night modes. As for the performance, it's nothing extraordinary but does allow games to run smoothly. Read the full review to find out more.

With Xiaomi, Samsung and Realme dominating the mid-range segment in India, Motorola is now almost a forgotten name. It used to hold pole position with the G-series but in recent times, the G-series has failed to keep up with the competition, at least on paper. Last year, however, Motorola introduced a new lineup with Android One certification and respectable specs. The aim was to address the pain points users face when using a budget smartphone. The Motorola One Vision is the second phone in the series and offers an interesting package for binge-watchers and photographers alike. How does it fare against the competition? Let’s find out —

Strangely enough, the Motorola One Vision is powered by a Samsung Exynos processor. The Exynos 9609 to be precise. It seems to be the only smartphone to be powered by the 7-series Exynos processor. The octa-core CPU includes four Cortex-A73 cores clocked at 2.2GHz and four Cortex-A53 cores at 1.6GHz. These are certainly impressive numbers and in line with the competition. Yet, the benchmark analysis reveals the Motorola One Vision is somewhat slower than the competition which includes the Realme 3 Pro, the Redmi Note 7 Pro and the Galaxy M30. 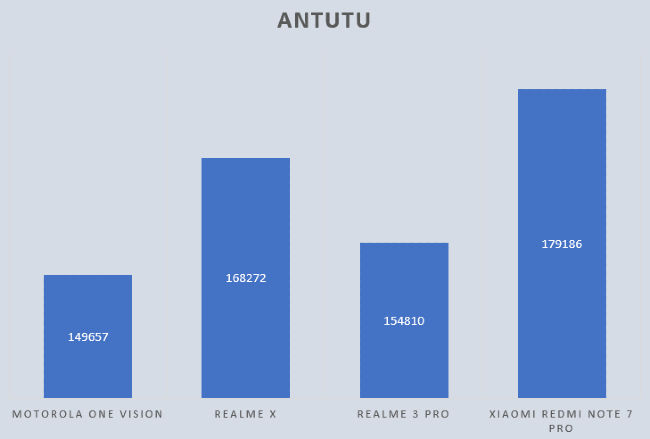 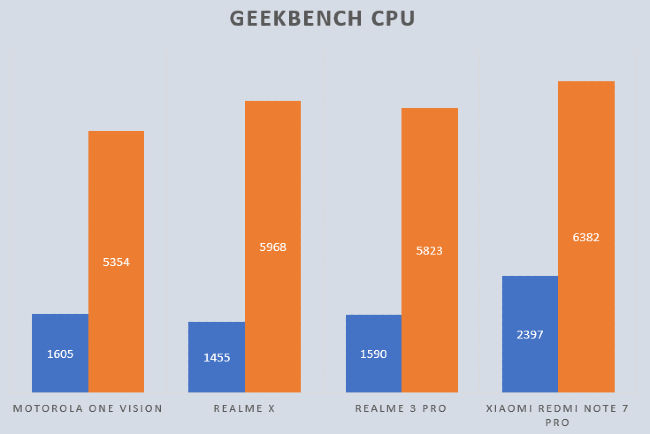 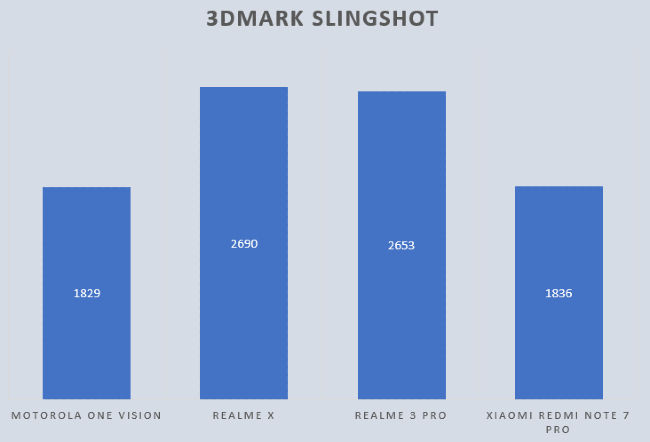 Having said that, you will likely find no big difference in performance while using the phone as a daily driver. In the course of this review, I used the phone to binge on Stranger Things on Netflix, played PUBG Mobile and even used it for writing articles on the go, and all the while the phone never really slowed down. Now there is a slight lag in launching apps which is only noticeable if you put the Realme 3 Pro or the Redmi Note 7 Pro side by side, but you will most likely not notice it. The clean, minimalist stock Android interface also helps smoothen things up and there’s less bloatware to be hassled with. There’s 128GB of storage by default along with the option to expand via microSD card, so there’s plenty of space for your apps. 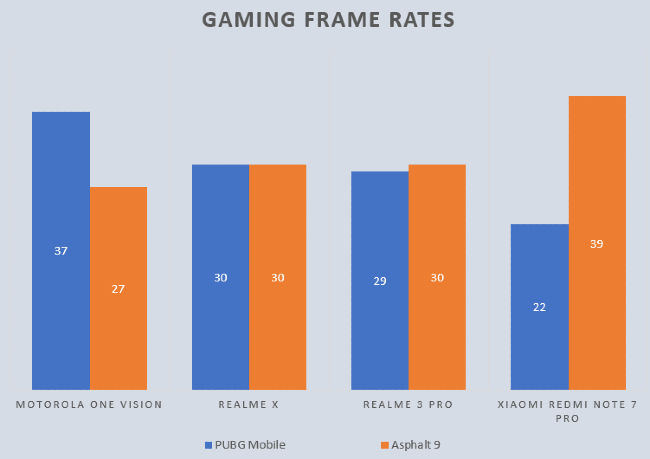 While the Motorola One Vision doesn’t advertise its gaming capabilities much, we found PUBG Mobile to run pretty smooth for a mid-range device. On Gamebench, we clocked 37  median FPS which is more than what you would get on the popular mid-rangers, with an impressive 92 percent FPS stability. On Asphalt 9, we clocked 27 median FPS which also pretty close to the max it can go, and the FPS stability was at 92 percent again.  It’s also because of the wide display and the punchy colours that the graphics look pretty good, especially on Asphalt 9. We’re not sure whether the HDR capability comes into play here though. 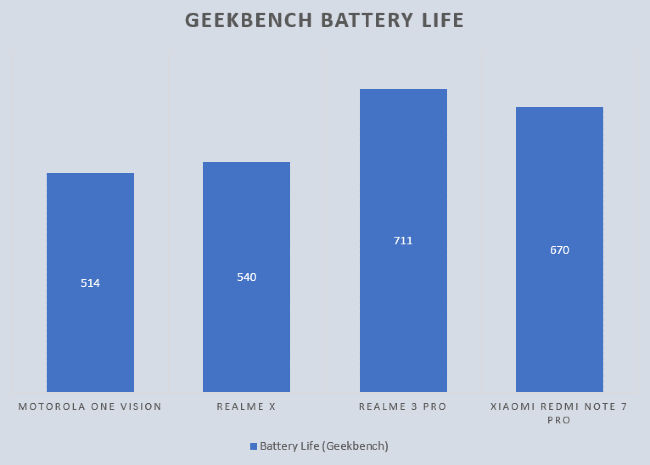 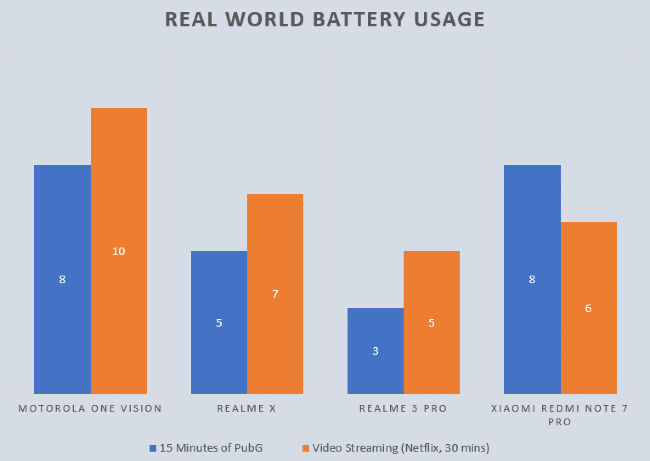 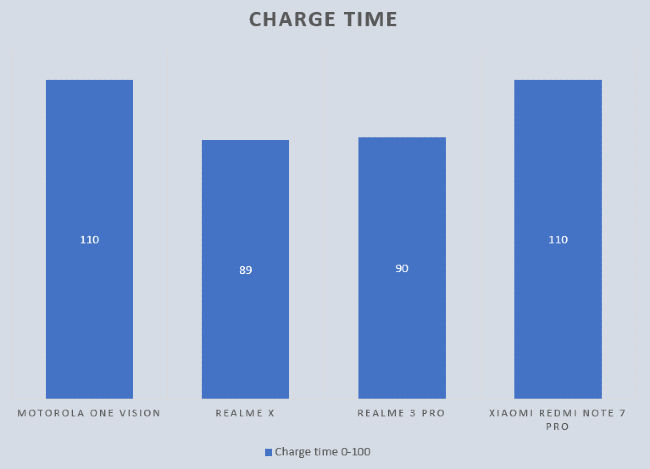 The Motorola One Vision also does a lot with a rather small battery. The capacity is only 3500mAh which is 500mAh less than what most mid-range smartphones offer these days, but combined with the power efficiency of 10nm manufacturing process and stock Android interface, the phone just about manages to last a work day, typically from 9AM to 8PM. We clocked around 8.5 hours on Geekbench Battery Test while  15 minutes PUBG Mobile drained the battery by 8 percent and 30 minutes of Netflix drained the battery by 10 percent. 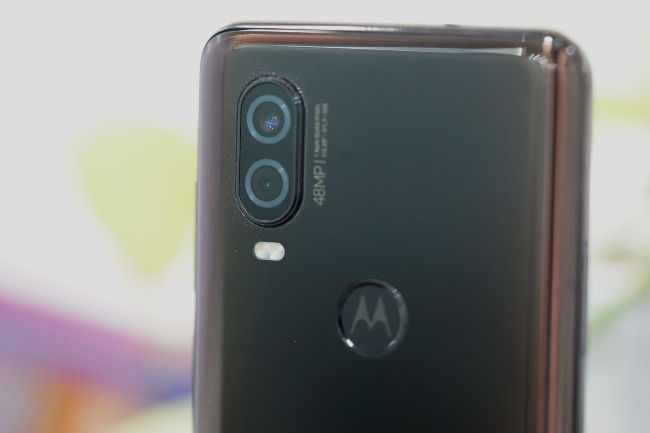 The camera is the reason for the phone’s existence, as the name would suggest. The phone offers a 48MP Samsung GM-1 sensor with 1/2-inch sensor size and 1.6um effective pixel pitch after binning. Sitting in the middle of 2019, this is not something new and groundbreaking anymore. Quite a few devices under Rs 20,000 offer the same camera and the performance, though commendable, has some issues. For instance, shooting in the 48MP mode itself results in blurry photos, and Moto’s way of getting around that was to remove the ability to shoot at 48MP altogether. You can only shoot in 12MP from the rear camera and that results in fairly sharp photos. A major downside to the One Vision’s camera is the white balance which is way off the mark when shooting daytime photos, especially with HDR on. In a camera comparison we did against the Galaxy M40, Honor 20i and the Redmi Note 7S, the Motorola One Vision managed to output sharp details but was way off in colour reproduction. There was also a significant amount of halation around objects when using the HDR mode, a result of poorly implemented algorithms. The phone also has a slow shutter response and there’s an annoying waiting period of around a second after you press the shutter. 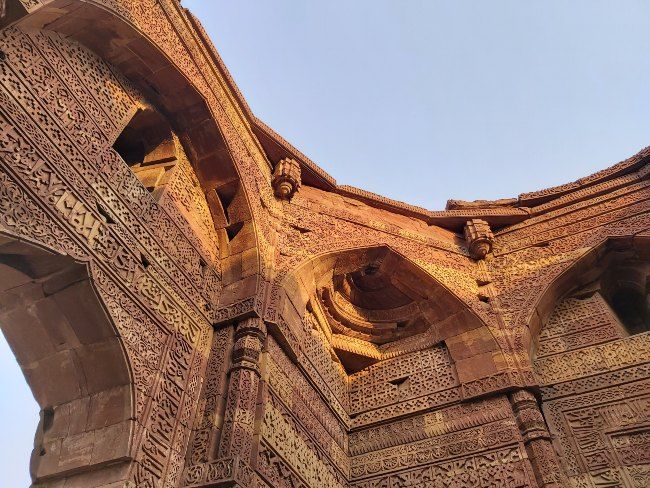 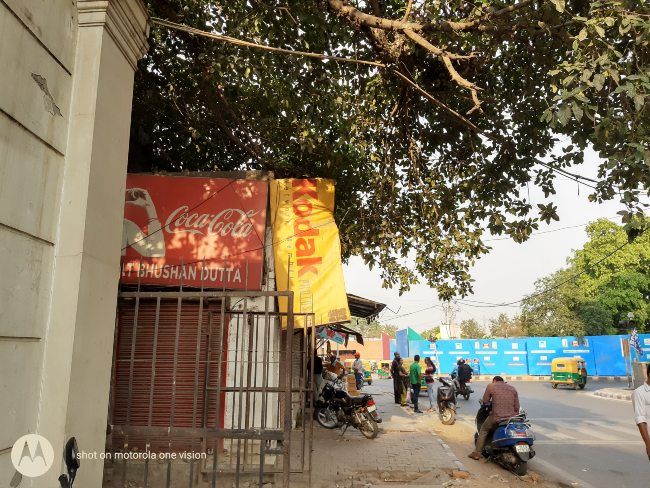 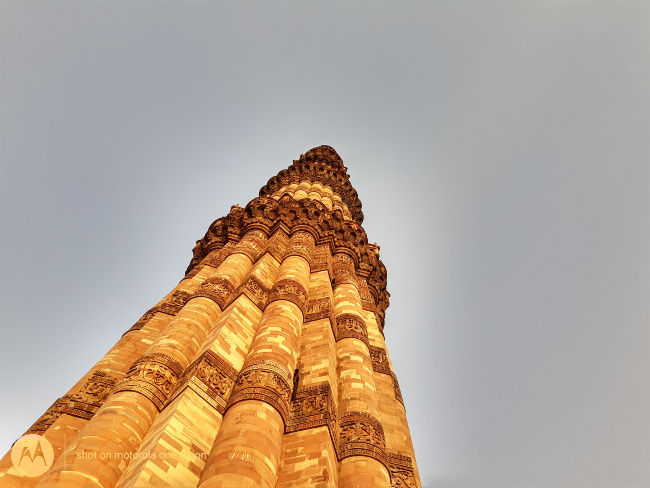 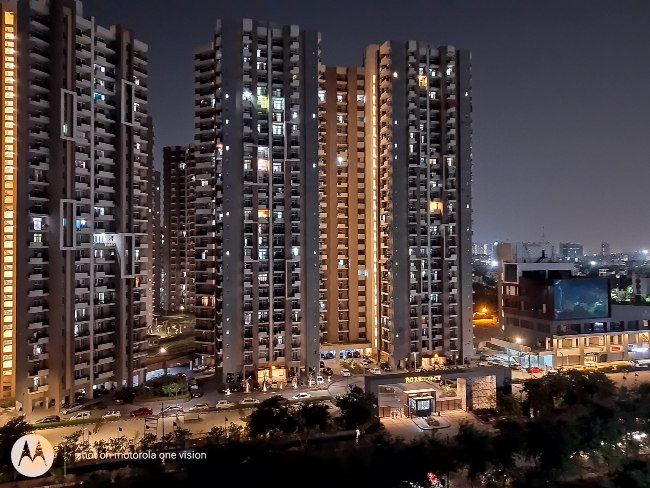 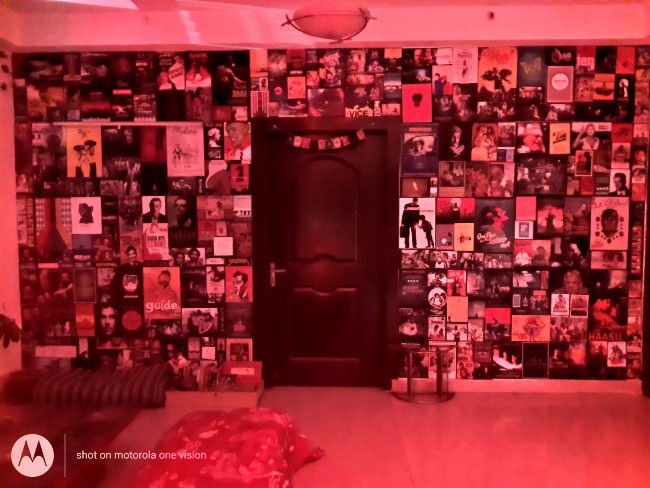 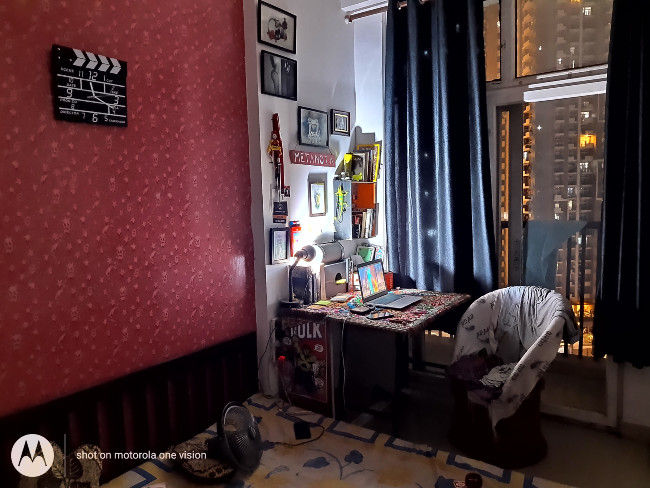 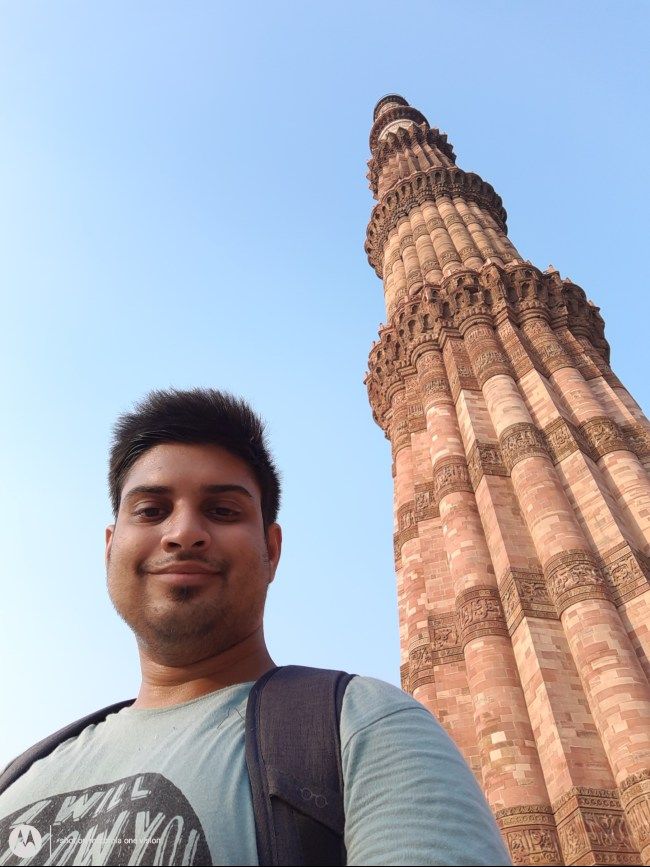 In low light, however, the Motorola One Vision does a commendable job. When using the dedicated night mode, the phone takes multiple shots to get the exposure right, and that results in some pretty sharp low-light images. You can check out our detailed camera comparison with the Motorola One Vision to get an idea of how the camera fares against its rivals.

The Motorola One Vision looks quite different from other phones in that price. It’s taller and narrower, making it easy to use one-handed. The One Vision uses a 21:9 aspect ratio display which is what most movies are shot in, and it’s a little wider than the 19.5:9 aspect ratio most smartphone displays come with. The advantage is that when the aspect ratio is supported by a movie, the experience is pretty immersive. The content takes up the whole area leaving only a thin black bar on the top and the bottom. But when it doesn’t, there’s thick pillar boxing on all sides making it look really bad. Games like PUBG Mobile and Asphalt 9 do scale up to support the display, but we’re not sure about other games. 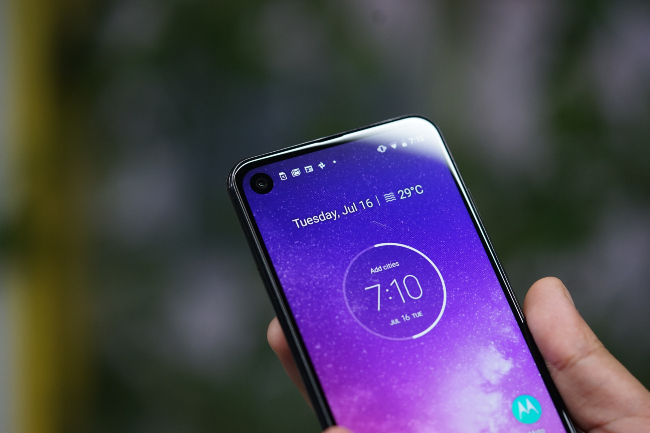 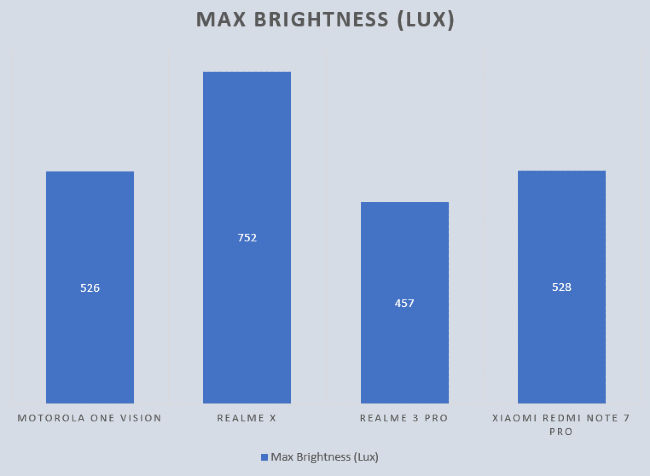 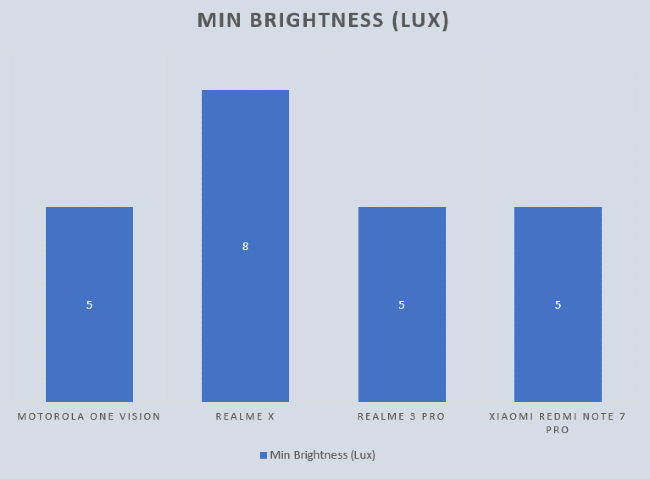 The phone also has a punch hole camera drilled into the top left corner of the display. The punch hole is bigger than other phones with the same tech, and you can’t really ignore it while watching something on the screen. But it does give the feeling of using an edge-to-edge display. The display is also HDR-rated but you can only watch HDR content on YouTube and not on Netflix, Amazon Prime Video and the likes. When turned on, HDR does make the visuals pop out, but it’s the lack of Netflix certification that makes dampens the experience. 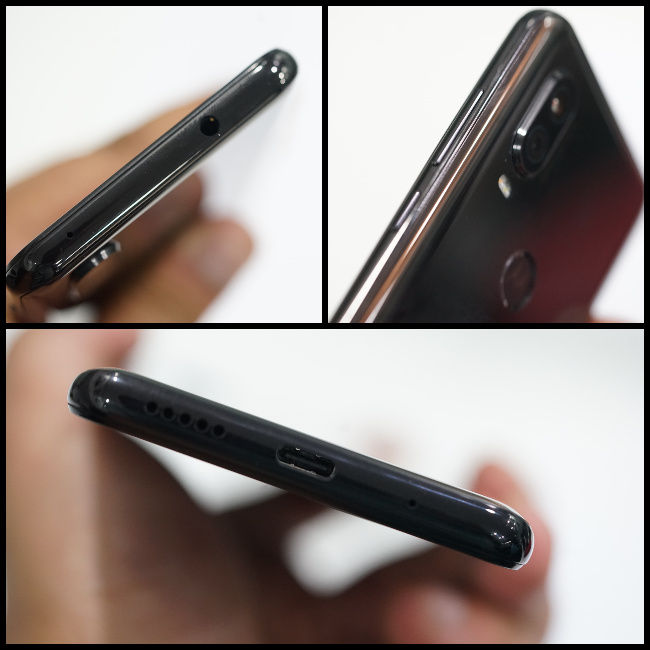 Furthermore, the rear panel of the phone is made of polished polycarbonate. Motorola uses a subtle gradient shade of copper that makes the phone stand out among multi-gradient designs you see in the name of a modern design. There’s a rear-mounted fingerprint sensor that’s pretty fast and snappy and the rest of the rear panel is left uninterrupted save for the dual camera module tucked away in the top left corner. Minimalist and clean. Just how we like it. 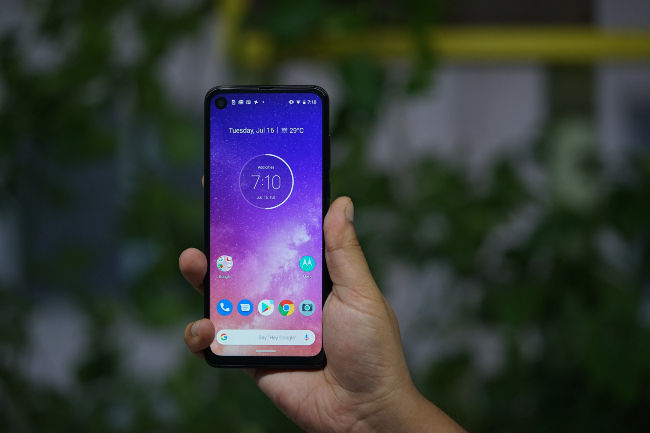 Long story short, the Motorola One Vision’s reason for existence is the camera and that’s where we found the most number of faults. The camera’s ability to take sharp photos is offset by the shoddy white balance and a slow shutter while in low light, it’s one of the best you can get. But no one buys a phone just for a good low light camera, and unless there’s a software update issued to fix the existing issues, the Motorola One Vision loses out against more powerful rivals. It’s performance isn’t anything great to write home about, but everything works just about well with no lags or crashes. As for the display, it does take some time getting used to and finding content that suits the panel is still a task, but we liked for the ergonomics it offers because of the narrow form-factor. At Rs 20,000, there’s too much uncertainty about the phone’s camera performance and with cheaper phones offering better performance, we don’t see us going out of our way and buying this smartphone.