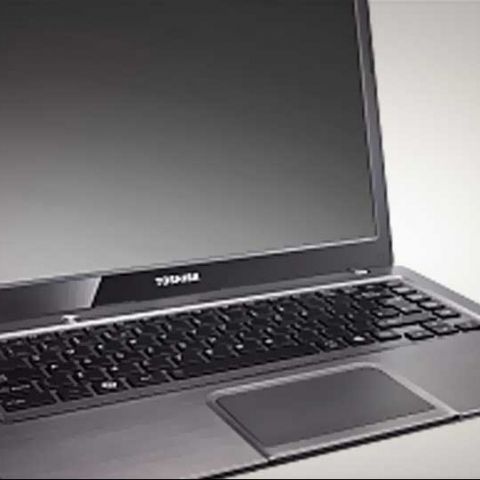 Toshiba's latest ultrabook offering in India, the Satellite U840 retails for roughly Rs. 53500. It faces some stiff competition from HP (Envy 4) and Samsung (Series 5). What we cannot get around is the fact that while the rivals are offering pretty powerful graphics with their ultrabooks in the same price range, Toshiba has sent out the U840 with just integrated graphics. System performance overall is fine, but the rivals tend to make more sense because of the better graphics option for that light gaming session.

Build & Design
With the frankly brilliant HP Envy 4 still very much fresh in our memory, the Toshiba Satellite U840 will have to do some real hard work to impress us. We fish it out of the box, and it reminds us of the Acer Aspire S3 ultrabook. The brushed metal on the lid and the palmrest has pretty much the same colour, and the dollop of plastic on the underside completes the package. The overall design has a sophisticated look to it, with the not shiny but brushed look. Additionally, the darker colour tone looks slightly better than the brighter Aspire S3.

However, the build of the Satellite U840 is nothing to be excited about. While there is a lot of metal used around the entire ultrabook, it still has some flimsy bits to it. The lid can be twisted a bit, something that isn’t possible with the HP Envy 4. However, the palmrest area is a lot more solid than on the Aspire S3, and offers the same solid feeling as the Envy. The display doesn’t move around when typing on the lap, an issue we faced with the much more expensive elder sibling – the Portege Z830.

While most of the Toshiba Satellite U840 has a simple brushed metal look, the bezel is the cheap glossy plastic. This is the same complaint we had against even the Envy 4, because for all the good work done elsewhere on the Satellite U840, this stands out like a sore thumb.

Ports are placed on the two side spines of the Toshiba Satellite U840, with nothing on the front and the back. Actually, there could have been no ports on the front anyway, considering how slim it is. No optical drive, something that seems to have become the exclusive offering of the Samsung Series 5! Speaking of which, the Satellite U840 is definitely slimmer, and slightly lighter than both the Samsung Series 5 and the HP Envy 4.

For what is essentially an entry-level ultrabook, we couldn’t have asked for more in terms of the generous amounts of brushed metal used on the Toshiba Satellite U840. However, the likes of the HP Envy 4 seem to have set the benchmark higher than what was the norm till now. We like the understated looks of the package, with the idea being to make it universally acceptable.

Features & Specifications
For ultrabooks, the Ivy Bridge Core i5-3317U processor is the most popular one in ultrabooks these days. It is clocked at 1.7GHz, with Turbo Boost taking it to 2.6GHz. This is helped along by 4GB of RAM, with one free slot that lets you increase the memory to 8GB.

The 14-inch display size seems to be rather popular with ultrabooks, particularly the second generation ones. The resolution of 1366 x 768 pixels is pretty much standard fare across the board now as well. The Toshiba Satellite U840 display is reflective, and seems to be slightly more so than the Samsung Series 5, but on the same platform as the HP Envy 4. Native brightness is a tad higher than the HP, but it does not handle colours as well on the higher end of the brightness scale – but that is true for most displays. There is adequate crispness to make text readability comfortable, and also helps with the video playback quality.

We had mentioned that the keypad on the much more expensive Dell XPS 14 is on the flatter side, in terms of the key height and design. The Toshiba Satellite U840 is even flatter. It does take a lot of time to get used to the lesser key travel. Somehow, the keys seem slimmer, not in terms of width, but with the height. We cannot understand why so many tweaks were needed on a keyboard. Not many people realize it, but getting used to a different layout does take time. Why add an unnecessary learning curve in the midst of what could be a seamless shift-over experience? The Toshiba Satellite U840’s touchpad works very well, and the response will be assured and works without fail.

In terms of storage, the Satellite U840 is on terms with the rivals – 500GB hard drive for primary storage and a 32GB flash storage for caching tasks.

Performance
With relatively similar specs to the Samsung Series 5 and the almost the same as the HP Envy 4, you would expect similar performance. And yes, for that part, the U840 delivers very well. It is very slightly behind the other two in the PC Mark Vantage test, but scores the best in the PC Mark 07 test – 4220 to HP’s 3150 and Samsung’s 2371. On paper, this would be a very quick ultrabook to use. However, in the real life usage scenario, the Windows installation does seem slightly sluggish. Apps take time to open, and the response time fluctuates quite a bit – between quick and slow. And we can’t blame too many preloaded apps on the system, because Toshiba’s machines are by far the cleanest of the lot. Plus, even our clean and tweak process prior to the benchmark tests didn’t help at all. And yes, the flash storage was active! This squarely puts the Toshiba Satellite U840 behind the HP Envy and the Samsung Series 5 in terms of the real world usage scenario. Just to be doubly sure, we reinstalled the OS on this ultrabook, and things became much better. The sluggish nature of the machine went out of the Window, completely. This clearly indicated some bloating of the Windows OS that came installed on this machine, could be because of some apps that were installed and then uninstalled.

If you will be using the ultrabook for a bit of gaming, for example, the Toshiba Satellite U840 isn’t the one to buy. This one doesn’t have a dedicated graphics chip, which is a huge surprise considering the immediate rivals offer rather powerful solutions. For a machine depending on Intel HD 4000 graphics, there isn’t much point in comparing it with machines that are significantly more powerful.

Battery life is an area where the U840 does quite okay. In our full load battery test, this lasted 185 minutes on a single charge, compared to the HP that did 223 minutes and the Samsung that did 229 minutes. However, you are still looking at around 5.5 hours of backup in a real world typical usage scenario, which is pretty good.

Bottom Line
Toshiba Satellite U840 does a few things very well, which makes us wonder if it was actually meant to target a limited demographic. What is on offer is stable performance (once the OS issues were ironed out), a decent build quality, and battery life that is satisfactory. For a box price of around Rs. 53,000, the Satellite U840 does make for an attractive option. However, for anyone looking for a machine that can handle some bit of gaming as well, the HP Envy 4 and the Samsung Series 5 should be considered instead.