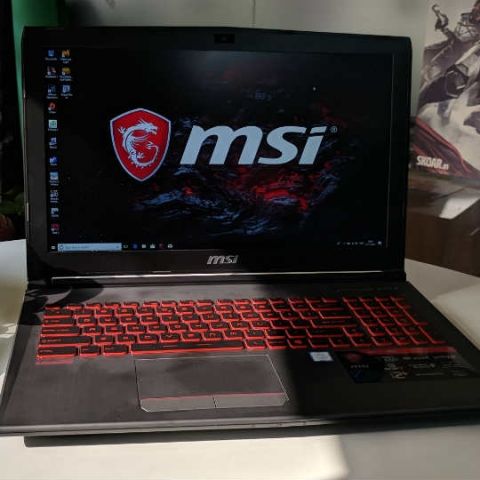 The MSI GV62 7RE adds another option for the gaming community looking to buy an all-in-one laptop for gaming and other tasks alike. It is not perfect, but if you are looking for an all-rounder at its price, this is it.

This year NVIDIA introduced one of the best gaming GPUs for budding gamers in the form of the GTX 1050 Ti. With lower TDPs and much lower heat signatures, the relatively new 4GB GPU is a hit among casual gamers and is available in most entry-level gaming machines. From what I have seen thus far, this entry-level GPU can take on most AAA games with ease when paired with a latest Intel HQ processor. MSI, which is a well-known brand among the gaming community also has two of its laptop series - GL and GP offering the GTX 1050 Ti. MSI has launched its GV series, which sits between the GL and GP series laptops when it comes to price. On the surface, the laptop looks quite simple, but after using the machine for almost a week, I can tell you that it is quite powerful. How powerful? Well, read on and find out! 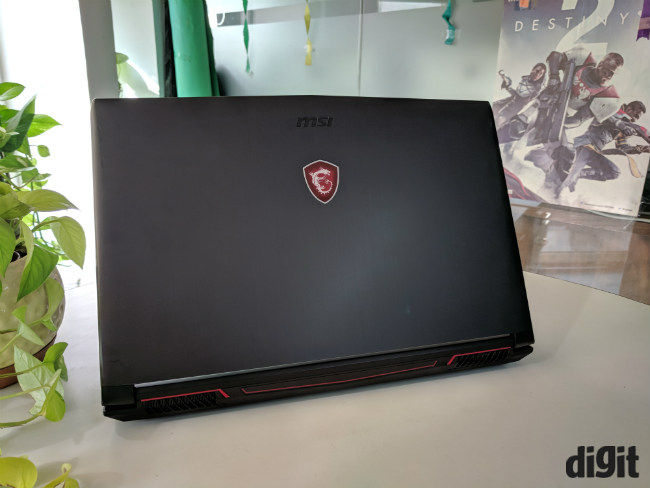 Build and Design
On first glance, MSI’s latest GV62 7RE looks different when compared to what I have seen from the gaming laptop maker previously. The design is downright minimal and to intimate that it is a gaming machine, the laptop has some red outlines on the back. The MSI dragon logo is also there on the lid, but it is not backlit which I think it should be, irrespective of the price. The all matte paint on the lid does a superb job of keeping the looks understated but at the same time makes the whole unit prone to fingerprints. 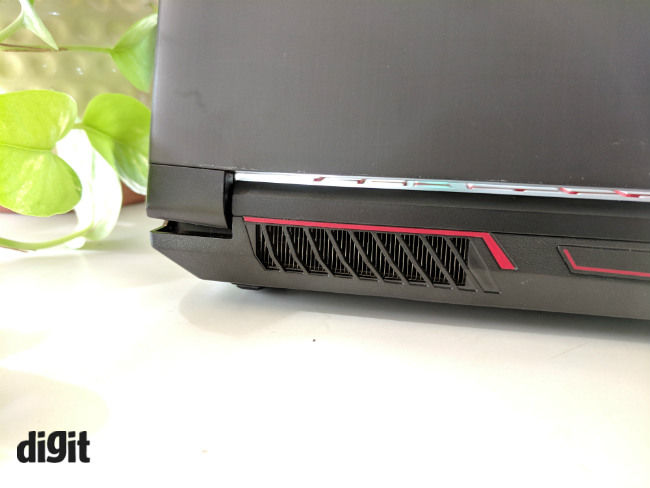 MSI has done a good job keeping the weight low at just 2.2 kilograms. It is due to the all plastic build, which feels solid for the most part. The laptop has passable flex both in the display as well as on the keyboard deck. The bottom cover also has a little bit of flex, but nothing major. It can be removed to give you access to the HDD, SSD and the two RAM slots. Removing the cover is not an easy task and requires you to break the warranty seal and then undo 14 Phillips head screws. The hinge holding the display is also quite good and offers decent resistance at all angles. 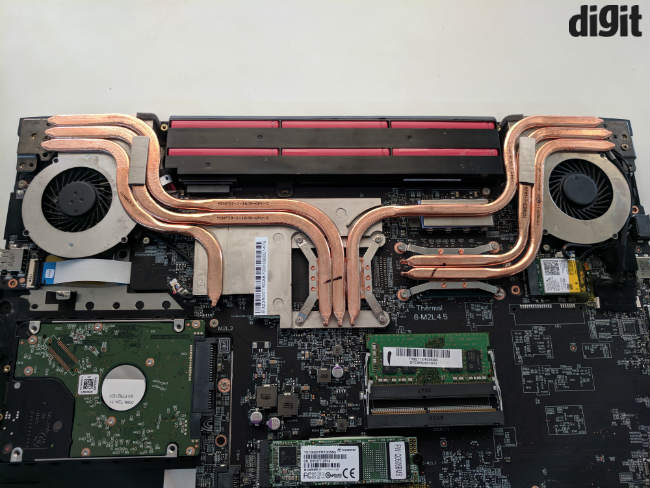 Taking a look at the cooling, it is quite evident that MSI has put some extra effort here with six copper heat pipes tasked with the job. The rear mounted two fan exhaust system does a fantastic job as well (more on that later). The 41Whr battery is simply screwed in place by a single screw and leaves enough space all around the motherboard to give the system enough breathing space. 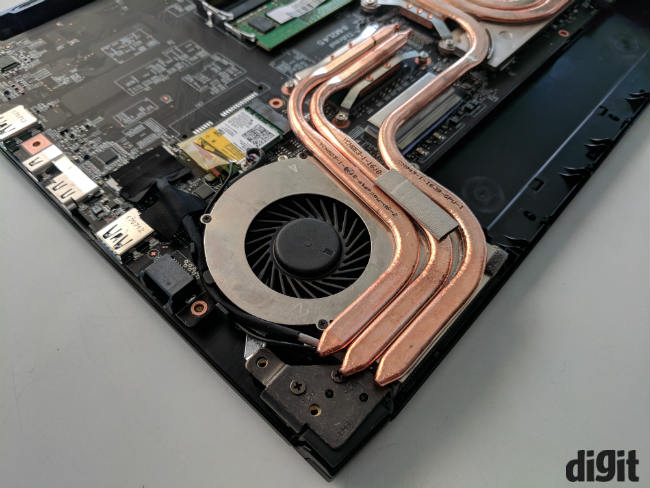 Display & I/O
While we do like the cooling and the internal space management of this laptop, the 15.6-inch display leaves us wanting more. MSI has used a non-IPS panel which means that the viewing angles aren't great. The viewing angles are outright poor when viewing the display vertically. This is evident when you tilt the display. One can also see a prominent colour shift when viewing the display at an odd angle and the lower contrast ratios don't help either. All that said, the VA panel has a better response time than normal IPS displays. As far as gaming is concerned the experience on this display is just fine. 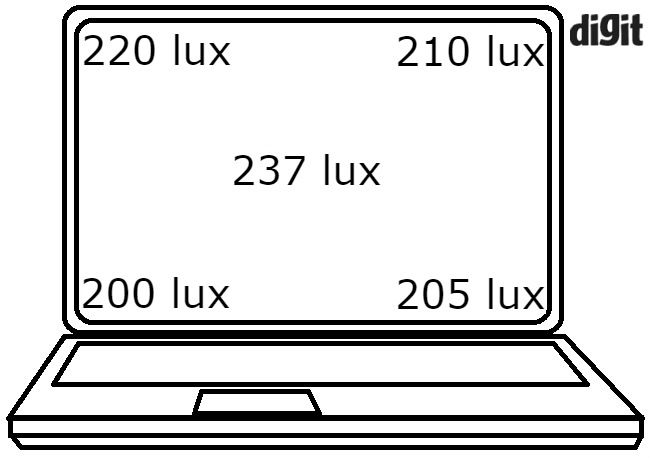 The good thing is that you can always connect a better display externally and the laptop has not one but two video out ports, which is certainly impressive at its price. The laptop packs an HDMI out as well as mini DisplayPort and both support resolutions up to 4K @ 30fps. Besides that, you get two standard USB 3.0 ports, one USB 2.0 port, SD card reader, one USB Type-C port and an ethernet jack. Best of all, instead of a microphone headphone jack, you get dedicated ports for both, which is nice if you are a gamer with a headset that has a separate cable for the headphones and the microphone. 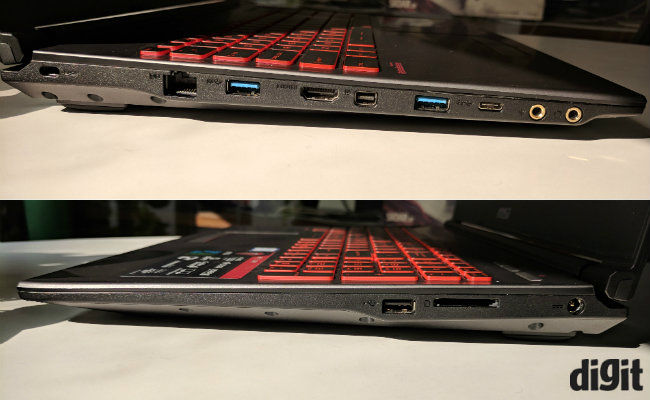 Keyboard and touchpad
To make things better, the MSI GV62 7RE comes with an improved keyboard, which offers two-stage red backlighting. The keyboard has adequate pitch and offers one of the best typing experience I have encountered on a gaming machine at its price. The keyboard, which is developed with SteelSeries offers long travel distance and press down with adequate feedback. While I am not a fan of the typeface MSI has used, the keyboard on this machine seems to be the right blend to give you the best of both worlds - gaming and office work. The only things which I feel are out of place are the volume and brightness controls which are shared with the arrow keys, making them hard to use in the rush of a game or while typing. 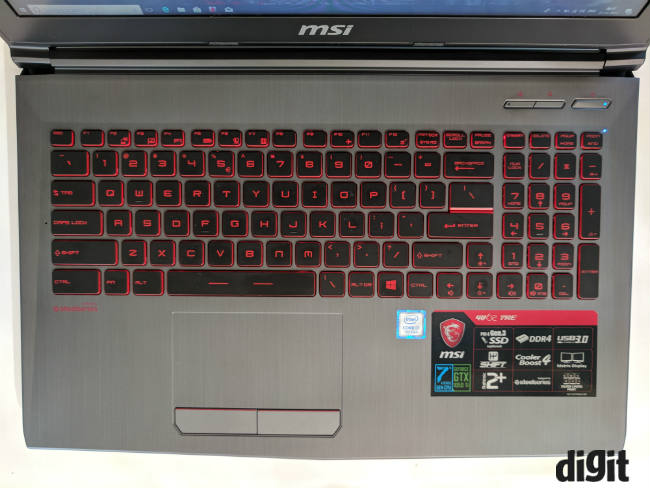 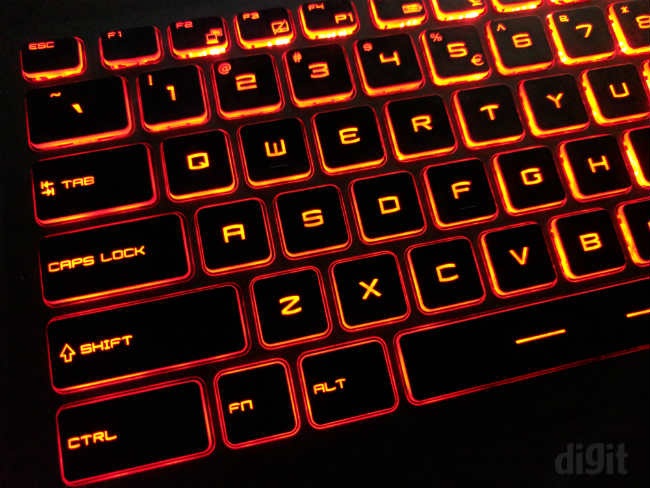 I am impressed by the touchpad, which is one of the best I have used on a gaming machine this year. It is not as smooth as the glass touchpad on a Dell XPS laptop or tracks as effortlessly as Mac’s touchpad, but amongst its peers, it is certainly better. The touchpad is well calibrated out of the box and tracks well across the screen. It supports all gestures and even though it has dedicated left and right keys, extends support for normal left click tap gestures. The physical left and right mouse buttons are also quite responsive and press down with an audible click offering appropriate feedback. 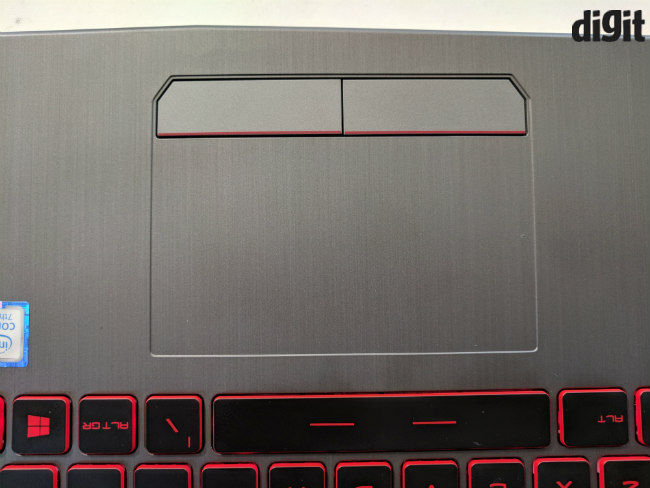 Performance
The MSI GV62 7RE shines once you start gaming on it. Laced with the standard set of hardware - Intel Core i7-7700HQ and the NVIDIA GeForce GTX 1050 Ti, the laptop can tackle almost all AAA games with ease. While most games will run without any issues at 30+ fps at high or ultra settings, you can enjoy the game at a higher framerate by lowering the graphics settings. In our testing, games like Doom, Dota 2, Metro: Last Light and PUBG ran well above 50 fps at their respective max settings. I also tried more graphics intensive titles such as Battlefield 1 which averaged around 48 fps at Ultra settings with HDR and DX12 on. Lowering the graphics settings to medium took the fps counter above 60, making the gameplay smoother and easier. 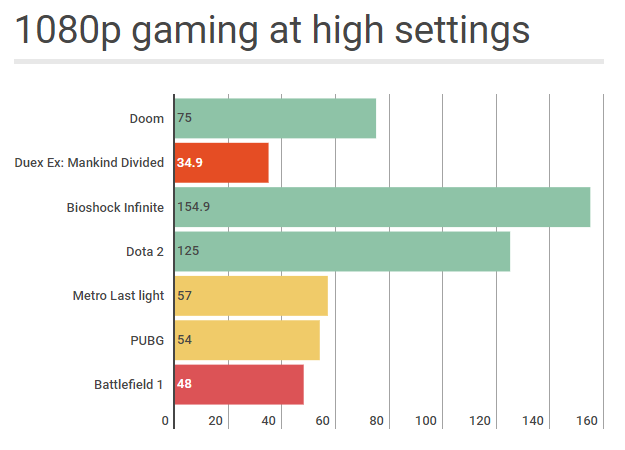 Needless to say that the laptop can take on day-to-day tasks easily. In all of this, the cooling capabilities of the machine play a very crucial role. As mentioned earlier in this review, there is enough breathing room around the back and the laptop goes into turbo mode while gaming, spinning the fans at almost 5700rpm. This keeps the CPU and GPU cool and we never saw any major throttling issues during the testing period. The area under your left palm does get a little warm while gaming as the 1TB HDD (All games were installed on the HDD) goes to a little over 50 degrees. You can check on other vital stats using the MSI dragon center app. The app allows you to tweak and monitor the cooling fans along with giving you info on the heat and load of various components. 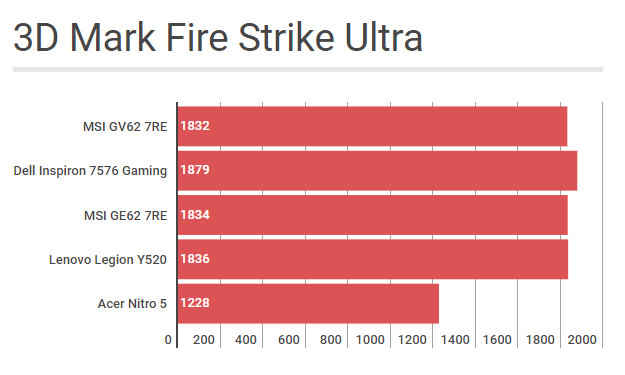 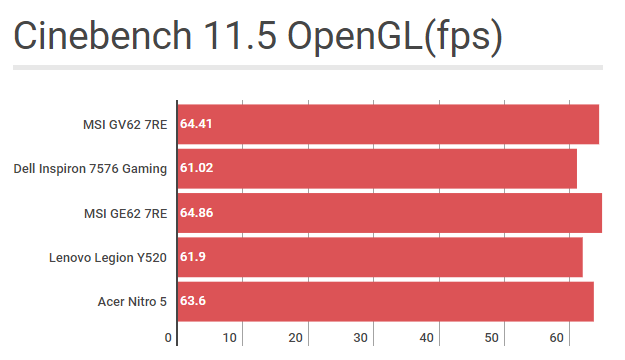 I am particularly impressed by the stellar audio output provided by the dedicated headphone jack, which is powered by Nahimic 2+ audio drivers. The in-game audio is impressive and even though the onboard speakers aren’t very loud, they produce ample channel separation.

Battery life
If you are buying a gaming laptop then be assured that the battery life won’t be any good and the MSI GV62 7RE isn’t going to change that. The 41Whr battery provides enough juice to get you through 3-4 hours of office work at 75% brightness but is not powerful enough to let you game on it. That said, you can do some light gaming on the machine at low settings, but the battery will only last you for an hour at best.

Bottomline
The MSI GV62 7RE is an iterative laptop with a better approach at the entry level gaming segment by MSI. The gaming performance is good, the keyboard is likable and weighing just 2.2 kilograms, making it one of the lightest when compared to others in this segment. The laptop offers great cooling as well. That said, it is not perfect. It would have been better if the laptop packed an IPS display over the VA panel it houses.

All-in-all, the new GV62 seems like a good choice for the new breed of office going youth, whose heart still beats with PC gaming.