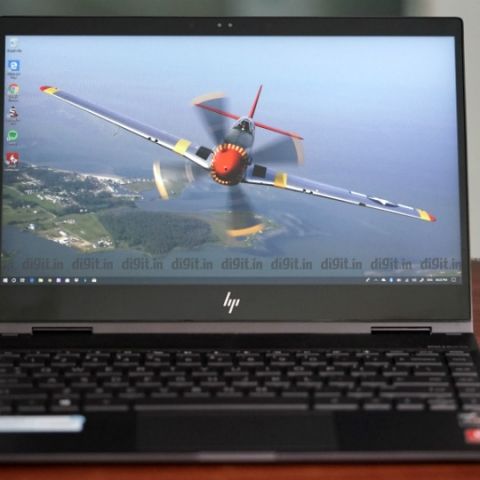 The HP ENVY x360 puts form ahead of function. While it scores top marks for looks and even performance, it misses the memo on usability and comfort.

The same way Lenovo is teaching its laptops to do “Yoga”, HP is teaching its laptops to go “x360”. There’s yet another laptop in HP’s stable that now folds out to become a tablet whenever the user wishes. I’m, of course, talking about the ENVy x360 convertible laptop that HP launched in India in October last year with two AMD processor options: Ryzen 3 (priced at Rs 63,490) and Ryzen 5 (Rs 77,990).

The HP ENVY x360 certainly looks like it belongs in the rolling suitcase of an experienced sales executive or in the large handbag of a fashion blogger. The all-metal body of the ENVY x360 features angular edges and polished accents, which makes the laptop look neat and clean and classy, while giving the user who picks it up sufficient grip. HP is particularly proud of the angled lining around the display hinges, which sports a unique damascus steel pattern. At 1.2 kilogrammes, the laptop feels sufficiently light on the hands and on the lap. 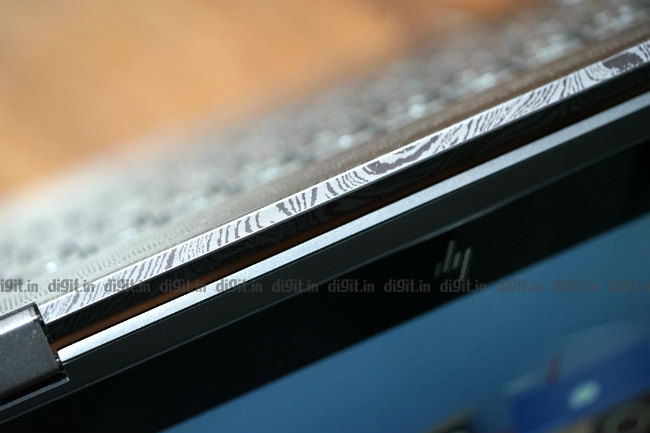 Opening the display up reveals a glossy 13.3-inch display with thick piano black bezels all around. As on the Pavilion x360, a thick and wide speaker strip takes its place above the keyboard. What feels odd about the keyboard area on the ENVY x360 is the placement of the touchpad; it doesn’t feel centered in relation to the keyboard unit. The sides of the laptop house the power button and a volume rocker but skip the fingerprint sensor. Instead, the ENVY x360 uses a Windows Hello-enabled face unlock system, which, in my experience, works impeccably without missing a single beat. In summary, the HP ENVY x360 scores top marks in the build department. 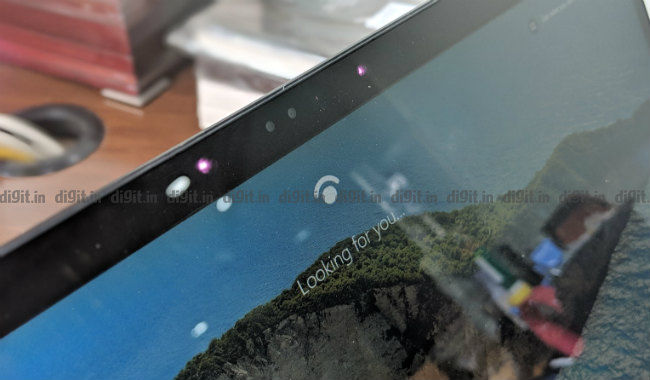 Available in only one size, the HP ENVY x360 features a 13.3-inch Full HD touchscreen display that’s both bright and colourful. The max brightness is sufficient for working in sunny outdoor spots like balconies and the colours on the screen appear full and rich. Strangely, the laptop limits the maximum brightness by about 20 percent when it’s used on battery power. Our standard display test revealed that the ENVY x360 review unit covered 93 percent of the colours in the sRGB colours scale and 72 percent of the colours in the Adobe RGB colour scale. The screen is otherwise very responsive to touches, making it easy for use in tablet mode. Palm rejection is on point and writing or drawing becomes an easy affair when you bring out the HP Active Pen that comes bundled with the laptop.

Sound from the speaker strip above the keyboard is loud and balanced as long as you don’t turn the volume up to maximum; if you do that, the sound distorts (and makes you grit your teeth). Electronic tunes like Röyksopp Forever sound clearest when the volume is maintained between 60 and 70 percent in a quiet bedroom. Luckily, stereo separation is apparent while watching films and listening to music. Though there isn’t much bass heard or felt from the ENVY x360’s speakers, the Bang & Olufsen drivers do their best to push out low frequencies without tearing them or omitting them completely. In summary, these speakers will do the job for unplanned video calls and short video watches. 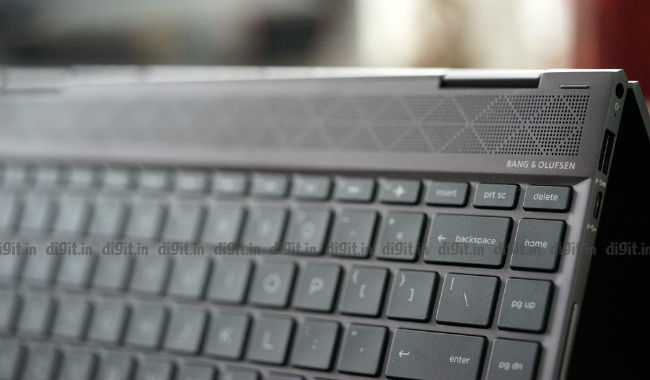 The HP ENVY x360 comes with a small selection of ports: two USB 3.1 ports (one on each side, that is), one USB 3.1 Type-C port, a round pin power port, a 3.5mm audio jack for headsets, and a microSD card slot. Compared to the single USB port offered by Lenovo on its YOGA 730, HP’s ENVY seems like a step-up. I wish the Type-C port included came with Thunderbolt 3 support for external monitors; it would put that Vega 8 graphics card to better use. 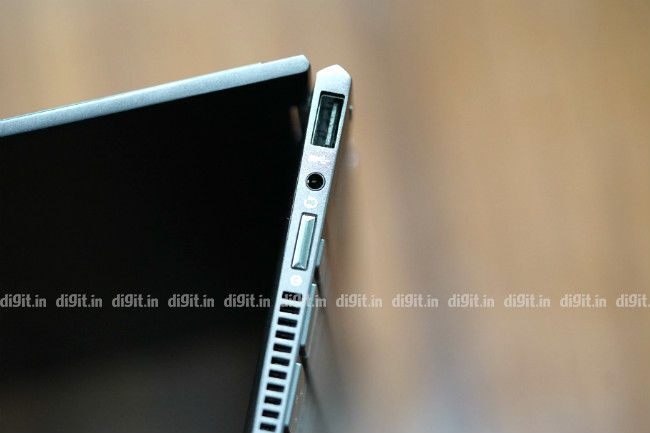 This is one department in which the HP loses squarely to nearly all of its competitors in the same price bracket. The keyboard on the ENVY x360 is disappointingly uncomfortable. The keys are too small and they travel very little, especially the ones on the top row. They’re also badly in need of better feedback. Keystrokes are hard to register, and as a result, you end up mistyping more often than you should. Because HP has accommodated the Home, End, Page up, and Page Down keys in a separate column on the extreme right side of the keyboard, the rest of the keys don’t feel centered. This makes the keyboard even more uncomfortable. Even if we overlook the absence of brightness control for the backlighting, the keyboard on the ENVY x360 is a disappointment. It’s best reserved for short emails. 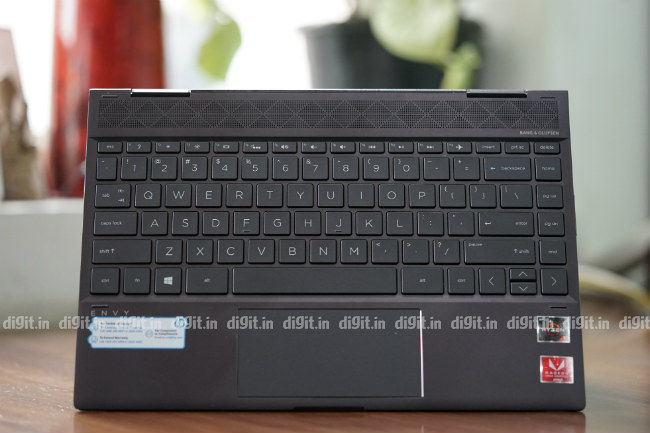 If you thought the keyboard on the ENVY x360 was disappointing, the touchpad is all the more so. To begin with it’s positioned away from the centre of the keyboard, so you simply have to shift your fingers a bit to the right to use it. Secondly, the click buttons inside the touchpad are clunky and refuse to respond two out of five times. Lastly, it does not use Windows 10’s precision drivers. Instead it comes with Synaptics’ ungainly touchpad control utility. This means you don’t get to use multi-finger taps and gestures the way you can on most modern machines. It also means it moves the cursor while typing a lot. This can hinder productivity by a great margin if you use all the features of a precision touchpad. There are ways to install precision drivers on the ENVY but they aren’t a permanent solution. HP should honestly learn to move with the times and employ one of Windows 10’s best features on all its laptops.

Performance is one area where the HP ENVY x360 excels. The review unit came with a an AMD Ryzen 5 processor with AMD Radeon Vega 8 internal graphics. The RAM onboard was 8GB and storage was taken care of a 256GB PCIe solid-state drive. With all this, the ENVY managed to bag a decent score on our standard performance benchmark tests. The AMD was good but not better than the 8th Gen Intel Core i5 on similarly priced models. On PCMark 8’s Accelerated Creative test, the Asus ZenBook Flip S and the Lenovo YOGA 730 beat the HP ENVY x360 by 427 and 536 points respectively. Luckily, the HP gained the upper hand in some graphics benchmark tests like 3DMark’s Fire Strike and Cloud Gate even if only by a slight margin. The ENVY’s sequential read and write speeds were phenomenally higher on CrystalDiskMark’s storage speed test. 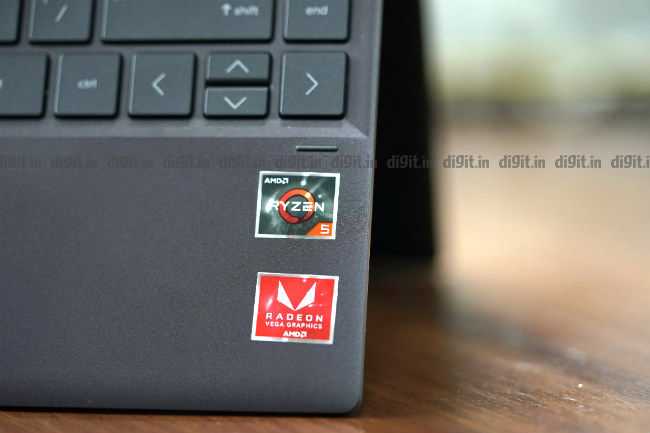 Real-world performance on the Ryzen-powered HP ENVY x360 was top-notch. Performing everyday tasks like responding to emails, composing documents, playing videos, and editing images online was a breeze. The ENVY handled multiple instances of moderately heavy applications like Chrome, Edge, Paint 3D, and Windows Mail without any trouble. Even when the number of tabs on each instance of Chrome rose to over twenty, the response of the pages remained consistent. The only fly in this otherwise smooth ointment was the unresponsive and uncooperative touchpad, which didn’t let me switch between apps and desktops easily. On the downside, I could feel ample heat on the base of the laptop. Trying to cool the machine down was a distractingly noisy fan that turned on and off every few minutes. 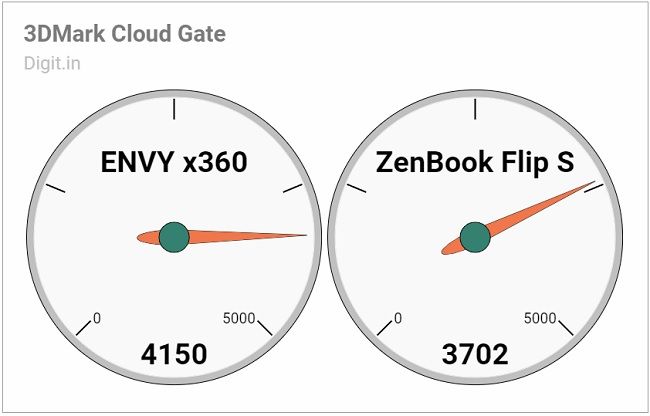 On a related note, HP should really learn to cut down on out-of-the-box bloatware; it’s both annoying and unattractive. The minute I set Windows up on the ENVY, I saw multiple pop-ups from HP’s utilities, and all of them were pretty much unnecessary. Some of these utilities, like the HP Support Assistant, always run in the background, making such bloatware more hateful. 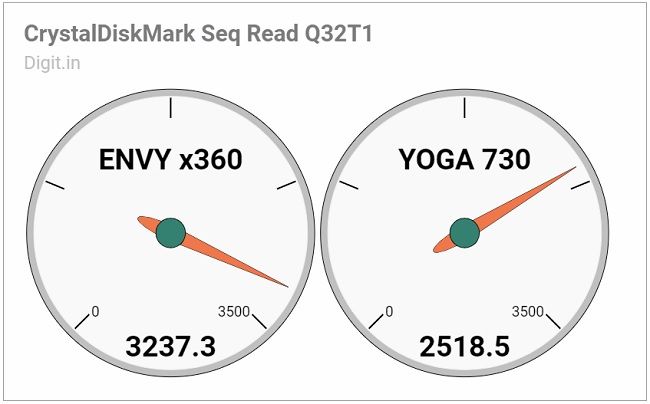 The battery on the HP ENVY x360 lasted 3 hours, 39 minutes on our standard battery benchmark test, which is 26 minutes over the Asus ZenBook Flip S’ score and a full hour over the Lenovo YOGA 730’s score. In real-world scenarios, the ENVY returned between four and five hours of battery life while writing and browsing. On one occasion I turned the brightness up to 90 percent, enabled Wi-Fi and Bluetooth, started browsing and writing with music playing loudly in the background, and watched the battery drop from 100 to 62 percent in about two hours. Charging the laptop from 15 percent to full took nearly two hours. While the ENVY’s battery life is better than the YOGA 730’s it could still do better, considering it’s a laptop meant for travel.

The HP ENVY x360 does what it has been designed to do faultlessly. My problem with the device is that it hasn’t been designed very cleverly for power users like me. Instead of focussing on usability (read comfortable keyboard and modern touchpad), HP’s spent its efforts slapping a damascus steel pattern on the rear edge of the convertible. The fact that the performance of the speakers doesn’t live up to the Bang & Olufsen logo you see below them adds to the disappointment. 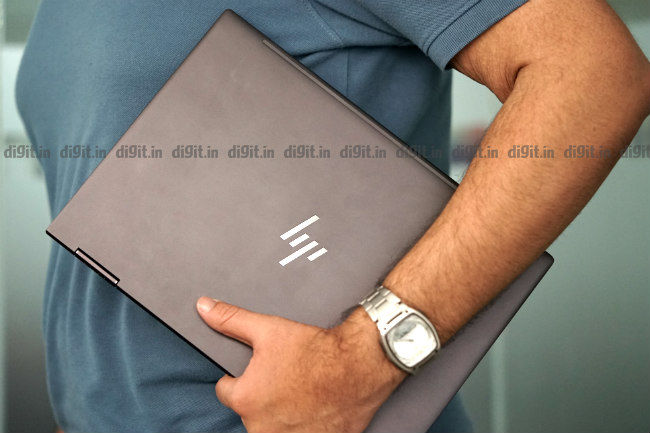 All that said, if the tiny shallow keys and the deadpan touchpad of the ENVY don’t bother you too much, the ENVY is a decent buy. The AMD Ryzen inside is quick on its feet and the solid-state drive is one of the quickest I’ve seen. Get the HP ENVY x360 if you believe form should precede function, and if you like the cool styling of this thin and light convertible laptop.