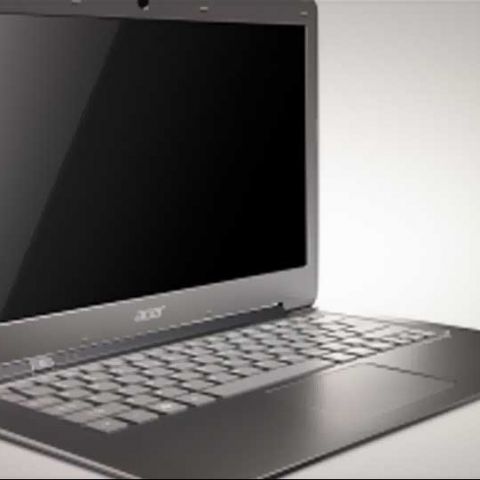 For an ultrabook that costs around Rs. 50,000, the Acer Aspire S3 does have a lot going for it - good build quality, true-to-ultrabook sleek form factor and snappy performance. Essentially, this will appeal to those who want an ultrabook on a budget.

As an ultrabook that doesn’t cost a bomb, the Acer Aspire S3 is essentially competing with the Samsung Series 5. Both cost between Rs. 50,000 and Rs. 55,000. These are, in other words, the entry points to the ultrabook world. Surprisingly, there is a pretty big gap between these two, and the next ultrabook – the Lenovo IdeaPad U300s that costs around Rs. 67,000. For anyone buying on a budget, these are the two options.

Design & Build
Weighing 1.35kg, the Aspire S3 is significantly lighter than the rival, the Samsung Series 5 (read our review) that weighs close to 1.5kg. While it isn’t as slim as the likes of the Dell XPS 13 (read our review) or the Asus Zenbook UX31E (read our review), it is still slim enough to easily slip into the bag.

While the S3 doesn’t have the eye-catching capability of let’s say the Dell XPS 13 or the Asus Zenbook, it does have a very classy finish. The aluminium frame has to do a dual job here – maintain solidity as well as keep the entire package light. The lid has a brushed metal finish, and we are happy to report that it isn’t at all a dust, scratch and fingerprint magnet like a glossy finish would have been. The same finish theme carries on throughout the ultrabook.

The brushed metal finish on the lid looks very classy.

Open the lid, and the placement of the power key is what will catch your attention – on the display hinge. To the right of it is the LED for the battery status, and the placement of that ensures clear visibility even when the lid is closed. The grey theme carries on throughout the laptop, and even on the keyboard. So much so that even the Windows and Intel Core i5 stickers are greyed! It is probably the slightly dull colour combination that is a bit underwhelming.

All ports are placed on the back, just like we had seen with the Dell XPS and the Toshiba Portege, for example. The idea seems clear – keep the sides as slim as possible, and use the already thick hinge area to stuff the ports. Not bad, but takes some getting used to. Two USB ports, HDMI out, power-in and a vent is what you will see here, on a black coloured base. The 3.5mm headphone jack is on the left side. The corresponding place on the right side is the card reader.

All ports on the back, with the cooling vent clearly visible

We could not get any flex on the lid, from any angle. However, the hinge holding the display up isn’t very tight, and the display tends to rock around quite a bit when the laptop is moved, or if there are vibrations. This could be annoying when you use this ultrabook for typing out a document, while kept on the lap. But this cannot be blamed on anything but the implementation of the hinge, because we had noticed the same problem when testing the much more expensive ultrabooks.

Overall, we didn’t find any weak spots as far as build quality of the Aspire S3 is concerned. It seems to have been put together nicely, and while it is technically meant to stay within a budget, it doesn’t feel cheap or plasticky in any way.

Features & Specifications
What powers the Aspire S3 is a 1.6GHz Intel Core i5–2467M processor. This is teamed up with 4GB of RAM. With 6GB becoming the norm, and even the Samsung Series 5 offering that much, the Aspire S3 does lose out on the spec sheet. Surprisingly, it doesn’t make any difference in the benchmark tests, as we will explain in the next section.

Slim profile of the Aspire S3

The review unit that we received had a 500GB HDD, and not an SSD like the more expensive ultrabooks have. But then again, the Samsung Series 5 also does not have an SSD, rather, a more spacious 1TB HDD.

The 13.3-inch display is a delight to use, even more so because it isn’t very reflective and the brightness levels are quite satisfactory. The resolution of 1366 x 768 pixels is more than adequate for most usage scenarios. However, while 13-inches isn’t a lot of real estate for enjoying a movie, even HD playback isn’t a problem if that is what you wish for.

Front on, this is how it looks

The keyboard is well spaced out, so much so that it may take you some time to get used to the slightly extra gap between the keys. There is good key response, and the travel is adequate. The touchpad has generous amounts of real estate. However, the response is a bit iffy at times.

Even though the focus is on slimness, the Aspire S3 does still cram in 2 USB ports and an HDMI out, and both should appeal to a wide user demographic. There is no optical drive though. Also glaringly missing is the Ethernet port, and you will be limited to using Wi-Fi for the most part.

How the Aspire compares to the MacBook Air

Acer preloaded this machine with Windows 7 Home Premium (64-bit), and a bunch of software – Microsoft Starter, Windows Live Essentials etc. A bunch of “utilities” as well, but we are never very happy about having stuff preinstalled on new laptops.

Visit page two of our Acer Aspire S3 Review, to read about the ultrabook's performance, and our verdict...

Performance
Throughout, the Acer Aspire S3 impressed us with its performance. We were surprised that it did better than the Samsung Series 5 even though the latter has a slight advantage in the power stakes with more RAM. In real life usage though, the S3 does feel sluggish at times, particularly when you may already have a couple of software open in the background. That is mostly due to the hard drive being on the slower side. It took 179 seconds to copy a 4GB folder. In contrast, the Samsung Series 5 did that in 145 seconds.

Where the Aspire S3 loses out is the graphics performance bit, and that is clearly indicated by the benchmark score comparison. What the S3 offers is an Intel HD 3000 graphics solution, while the Samsung Series 5 offers something most ultrabooks don’t – a dedicated graphics card – AMD Radeon HD 7550M (1GB). Not only does that allow you to use the ultrabook for gaming, while switching helps either ways. No serious gaming at all on the Aspire S3, while the Samsung Series 5 can handle that to a certain extent.

We award full points for the Aspire S3 for keeping rather silent and not getting too warm, even after an hour of normal usage. Even during the demanding benchmark tests, the S3 was surprisingly quiet, and not growling like an airplane about to take off.

Battery life isn’t the strong point of the Aspire S3. In our benchmark tests, the S3 ran out of juice in 132 minutes, as against the Samsung Series 5 that survived for 160 minutes. However, these tests are extremely taxing, and the battery life on offer is the “worst case scenario”. Essentially, for real life usage, the Aspire S3 will easily do double of this, and that takes it to around 4 hours. However, the Samsung Series 5, by that logic, will go well beyond 5 hours on a single charge under most usage scenarios.

Bottomline
For an ultrabook that costs around Rs. 50,000, the Acer Aspire S3 does have a lot going for it – good build quality, true-to-ultrabook sleek form factor and snappy performance. Compared to the nearest rival, the Samsung Series 5, the S3 scores better than the in terms of raw system performance.

However, the fact that Samsung offers a graphics card also adds an extra bit of dimension to that package. In the end, the S3 will appeal to those who want an ultrabook on a budget – decent performance, very slim design and an affordable price tag.