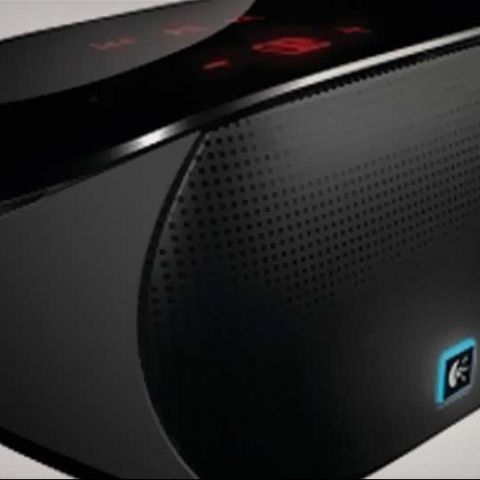 For a wireless speaker that can be carried around with ease, the Mini Boombox does tick all the right boxes. A small speaker will always have limitations with regards to sound quality and loudness, but this one works well within the boundaries.

For portable speakers, it is usually a case of not expecting too much. The form factor caters to the ability to move it around with ease, but the biggest compromise, inevitably, is the sound quality. In the case of the Logitech Mini Boombox, things are surprisingly rosy.

Design & Build
The moment you unpack the Logitech Mini Boombox, the sheer smallness of the size and the compact form factor takes some time to get used to – you always assumed that it would be bigger than this, and it actually turns into a surprise at the end of it all.

The build quality of the Logitech Mini Boombox is something that could have been improved a bit, for sure. The entire thing is made completely of plastic, with the idea being to keep the weight down. However, the plastic is fine for the most part, but things become bad on the top panel. This is essentially where the controls are – we will get to that in a bit. The glossy nature of this section is very clearly evident by the number of scratches you can see on the surface. No matter how much care you take, this will inevitably happen.

The speaker, front on

The front grille of the Logitech Mini Boombox is black in colour, and the rest of the body is in white, thankfully in matte. There are multiple colour options, including an all black one. Agreeable build quality throughout, and seems well put together. However, do not expect it to look or feel premium. Due to the compact size of the Mini Boombox, the drivers are very close to each other, which will inevitably muffle out the stereo sound, effectively reducing it to what will sound like mono.

Coming back to the bit about the top panel, the controls of the Logitech Mini Boombox are all touch sensitive, with no physical buttons. Unfortunately, there aren’t even any markings to indicate the controls’ positions. This does look good aesthetically, but creates a problem that we will get into a bit later.

All ports and the power key of the Logitech Mini Boombox are placed on the rear panel. Considering that this is a wireless speaker, you surely wouldn’t bother with wired connections as far as possible.

Features & Specifications
Wireless is the keyword for the Logitech Mini Boombox speakers – wireless via Bluetooth. You can connect it to any Bluetooth capable smartphone or tablet, and blare out the tunes. This can act as a device for listening to music, or using it as a speakerphone for voice calls – no microphone onboard however. The Mini Boombox does has a battery pack that lets you play music on the move, like most portable wireless speakers.

Logitech is targeting this for the demographic who want a speaker that can be placed in one corner of the room, and provide the tunes for a house party. We aren’t very convinced with this, because we feel that the Mini Boombox is actually a speaker good enough for a medium or small room, something that will fit perfectly in a dorm room, or with someone who hates wires running around the entire room.

Performance
Hooking up the Logitech Mini Boombox to a phone via Bluetooth is a very simple task. We first connected it to an iPod Touch, and then with an HTC One V. In both cases, the process is the same. To start the pairing mode on the Boombox, switch the device on, press the Bluetooth touch key for 6 seconds till it starts flashing alternatively in red and blue. The Bluetooth on the phone / tablet needs to be switched on, and post detection, simply tapped to connect. Setting it up is very simple. For those of you who would connect it via a wired connection, there is the 3.5mm jack at the back of the Boombox.

For the most part, the voice quality from these tiny speakers was satisfactory. At low and medium volumes, the audio is quite clear. It sounds great for a speaker set of this size. However, turn up the volume a bit more, and there is considerable distortion. Anywhere above 50 percent, and the sound will hurt the ears, mostly. For most part, you can feel the vibration on the device, increasingly as you push up the volume. The bass sounds wooly, to say the least. Having said that, we must complement the neutral nature of the sound, quite a contrast from the uncomfortably treble heavy speakers of this size. Even in terms of loudness, while it can be quite loud, you would really only be able to take it up as far as the clarity allows.

We had mentioned about the touch sensitive controls earlier in this review, when we were describing the device. Coming back to that point, we do not appreciate that the backlighting of these controls goes off, and you don’t really know what is where once that happens. Kudos to Logitech for letting you control playback volume from the connected device, but it is always useful to know where each control on the device is. Particularly if you are using this as a speakerphone! Speaking of the touch controls, the response is a little iffy at times, needing a slightly tougher stab than at other times.

Logitech says that the Mini Boombox will offer 10 hours of continuous music playback. However, that will be hugely dependent on the volume of music you listen to.

Bottomline
The Mini Boombox is targeted at a limited audience. It comes across as a smart device that allows you to carry the party wherever you go. But be sure, the party won’t be too loud – the neighbours need not worry! The tiny pocket sized speaker has its limitations, but does very well within the boundaries it works within. It is powerful enough to fill a medium sized room with music. Whatever the positioning of the device, this is essentially a personal listening device – for small groups in a room that is not very big. Any more, and you will feel the need for a bigger speaker.