Honor has announced discounts and offers on select products under the 2nd anniversary sale, which is being hosted exclusively on its e-store. The company is offering 15 percent SuperCash on its Honor 9 Lite when purchasing it via MobiKwik wallet and the 4GB RAM/32GB ROM variant of the Honor 7X will be available with a free mobile cover. The 4GB RAM/64GB model of the Honor 7X is also up for sale and buyers can use either the HONORBDAY2K for availing a Rs 2000 discount on the device or HONORBDAY1K for Rs 1,000 off. The HONORBDAY2K coupon is available in limited quantities. The company is offering 50 percent off on its power bank APO8Q and the Quick charger AP32, and a discount of up to 90 percent on accessories.

Honor, Huawei’s e-brand for digital natives today announced a slew of exciting discount and cashback offers as part of Honor’s 2nd Anniversary sale exclusively on its e-Store http://store.hihonor.com/in .Some of the best and proven budget smartphones such as Honor 9 Lite, Honor 7X, along with Honor Power bank will be available with discounts and SuperCash options. Consumers can avail 15% SuperCash on paying with MobiKwik wallet, with maximum amount being INR 3,000. The offer is valid from 21st March until 23rd March.

“Honor has had a successful run in India, with store.hihonor.com/in, our e-marketplace, playing an integral role therein. Honor expresses gratitude to its customers for driving this phenomenal growth; and therefore on the second anniversary of our official store, we are happy to announce lucrative discounts and cashback offers on our bestselling smartphones like Honor 9 Lite and Honor 7X. We hope to maintain the winning streak for years to come with our strong loyal customer group.” Said P Sanjeev, Vice President, Sales, Huawei Consumer Business Group

Following are the offer explained in a detailed manner. Consumers can go on http://event.hihonor.com to read and avail offers and discounts. 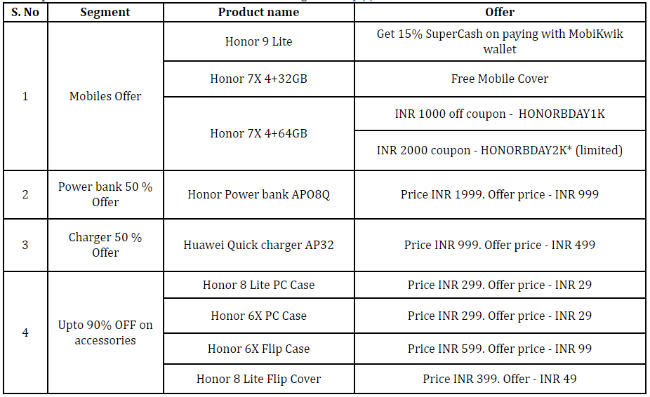 Honor 9 Lite has emerged as the smartphone of choice among customers in the Indian market owing to its best in class technology innovation, seamless performance, and elegant form factor. Honor 9 Lite is a brilliant pocket-friendly smartphone with a proven track record of being sold out in every flash sale within minutes on Flipkart.com. It is a 5.65-inch smartphone with an 18:9 IPS display, designed with dual cameras on both the front and rear and runs on Android 8.0 Oreo with EMUI 8.0. The quad-camera smartphone that delivers unparalleled images for the selfie-lovers, is available at an extremely competitive price point of INR 10,999 for the 32 GB variant and INR 14,999 for the 64 GB variant. Last week, Honor announced the rollout of ‘Ride Mode’ feature via HOTA update (Huawei Over The Air) exclusively for Honor 9 Lite smartphone in India. The new feature urges consumers to follow responsible and safe smartphone usage operating a two-wheel vehicle. The Ride Mode update on the Honor 9 Lite will be initiated in batches and will be completed by March end.

The Honor 7X, priced at just INR 12,999 (for 32GB Version) & INR 15,999 (for 64GB Version), was launched at an event in London and has sold over 40million since its launch in early November. The Honor 7X offers true value for money and the attractive price tag coupled with best in class features generated a lot of attention from fans all over the globe. Honor 7X has been hailed as one of the best devices of the year, giving optimal performance at economical price. This well-rounded phone provides one of the highest screen to body ratio with a fancier display- packing a massive 5.9” screen in a sleek body. It gives an immersive visual experience along with picturesque portrait like photographs. Honor 7X device sports a dual-lens 16MP + 2MP rear camera supported by a phase detection autofocus and LED flash. Accompanied by special filters and ‘Effects’ function, amateur photographers too can stand out on social media with superior quality images. Honor 7X boasts an 18:9 edge-to-edge, bezel-less screen which enhances viewing and gaming experience significantly.