LG will launch the G7 ThinQ on May 2 in New York, and in Seoul the following day. Meanwhile, leaked renders suggest that the phone will be available in 5 colour variants and sport a notched design. 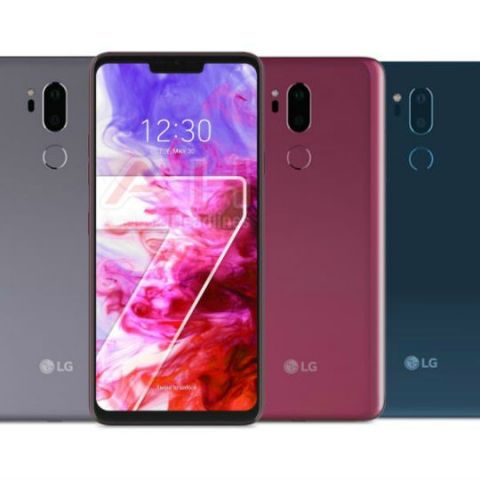 LG has confirmed that it will launch its upcoming flasghip smartphone, the LG G7 ThinQ on May 2 in New York, and in Seoul the following day. The announcement was made via the company's official Korean blog, where it also confirmed the name of the smartphone. The post also informs us that the phone will come with an improved version of the AI introduced in the LG V30S ThinQ. Other details about the phone are not yet known. This comes soon after Android Headlines posted the official press renders of the upcoming flagship on its website. The images show the front and rear of the device and suggests that it will be available in five colour variants. These include Aurora Black, Platinum Grey, Raspberry Rose, Moroccan Blue, and a matte version of Moroccan Blue. The report notes that the availability of these variants will vary based on region and carriers.

The images of the LG G7 are also is also in-line with other renders renders and reports suggesting that the company will embrace the notch design. However, the renders suggest that the phone will also sport thin top bezel. Over on the rear of the phone, it seems like the device will feature a dual rear-camera setup like its predecessor. However, unlike LG's previous devices, the two cameras are stacked vertically instead of horizontally. It also seems like the power button will once again be integrated with the fingerprint sensor at the back of the LG G7.

Reports suggest that the LG G7 will be powered by Qualcomm’s flagship-grade SoC, the Snapdragon 845. In terms of memory, the phone is expected to offer 4GB RAM and 64GB of built-in storage. The phone was also spotted on AnTuTu recently in which is scored 2,52,473.

The ‘notched’ design is the new 'in thing' from Android manufacturers this year. Asus, Huawei Vivo and OPPO have already unveiled smartphones sporting the design and it seems like LG will not be the last. OnePlus‘ upcoming smartphone, the OnePlus 6 is confirmed to sport a notch. However, reports suggest that the phone will also give users the option to hide the notch.