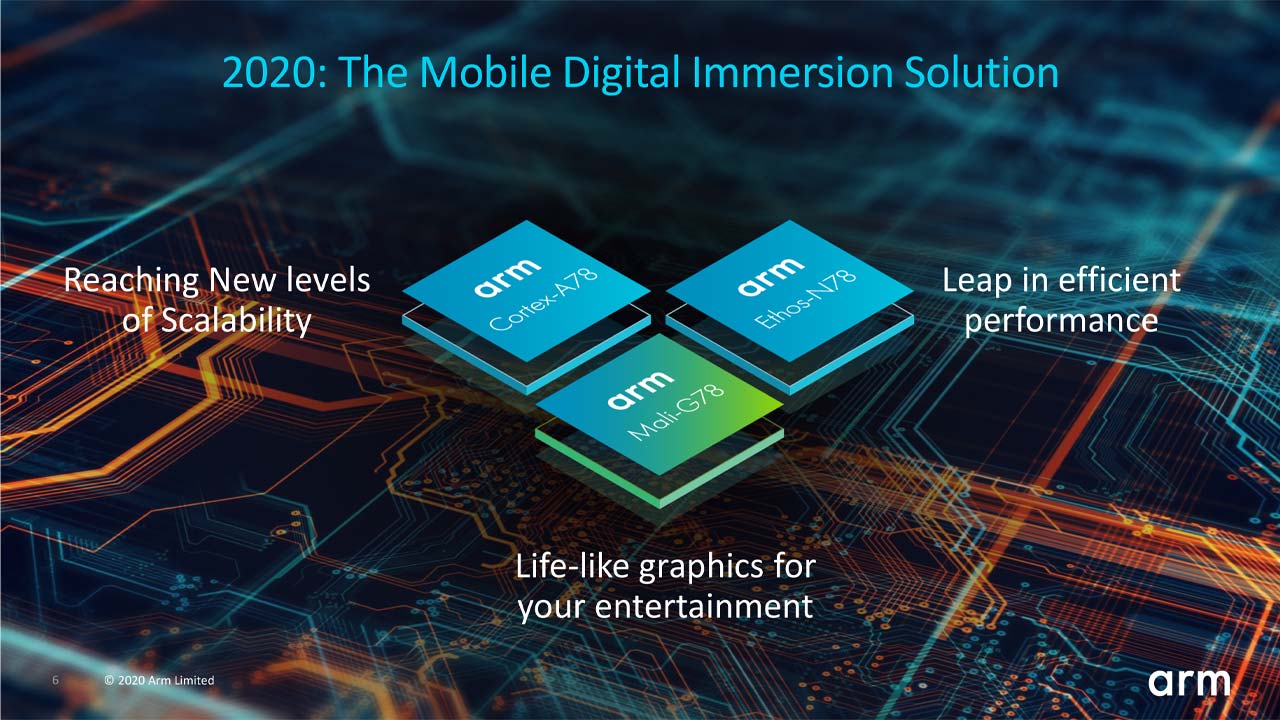 ARM has today made not one, but two huge announcements. The company has revealed their next processor cores, the Cortex A78 an expected upgrade to the current A77 and the Cortex X1, a brand-new core altogether. With the announcement of the Duo, ARM is taking serious swings at the likes of Apple’s A-series bionic processors.

Cortex-A78: All about power efficiency

The Cortex A78 cores move to a 5nm process node which helps improve not only the efficiency numbers but also those of performance and even the area taken up by the core within the processor die. The Cortex A78 promises a 20 percent boost in performance over the A77 within a 1-watt power budget. This is achieved thanks to higher clocks, the move to 5nm and the architecture changes. Instead of looking at the Cortex A78 in terms of its peak performance output, consider the fact that a Cortex A78 core running at 2.1 GHz consumes up to 50 percent less power than a Cortex A77 core running at 2.3GHz. Current SoC’s tend to use a cluster of A77 and A55 cores banded together, and ARM says that the Cortex A78 cores could replace the current A77 ones, leading to 20 percent increase in sustained performance while taking up 15 percent less area within the SoC die. The next generation of mobile SoCs, at least the ones using Cortex A78 cores, seem to promise slightly improved performance, but significantly better power efficiency. The current Qualcomm Snapdragon 865 chip uses a combination of the custom Cortex A77 and Cortex A55 cores.

Cortex-X1: All about performance

ARM’s processor cores have always had a hard time competing with Apple’s A-series chips. The Cortex A7x cores just could not match Apple’s engineering, and now, ARM’s answer to that is the Cortex-X1 core. The chip is a result of ARM’s Cortex-X Custom (CXC) program and wholly deviated from ARM’s philosophy of trying to balance performance, power and space occupied. ARM claims that the Cortex-X1 core should be able to deliver 30 per cent performance gains over the Cortex A77 cores and a 23 per cent boost of the just-announced Cortex A78 core. This is for all cores running at the same clock speed, making it an even bigger achievement. The X1 cores also come with double the L1, L2 and L3 caches in comparison to Cortex A78. It is important to note that ARM has not revealed any specific power efficiency numbers for the X1 core. Additionally, given its larger footprint on the die and higher power demands, it's unlikely that an X1 core would make its way into a smartphone for now.

We’re going to make a wild assumption here and say that it is likely that the ARM Cortex-X1 core could lay the groundwork for the long rumoured ARM-based Apple laptops. While an X1 core may not be paired with a Cortex A55 core, creating an SoC with 4 Cortex-X1 and 4 (or more) Cortex A78 cores could be a potential laptop-powering combination. Amazon-created Graviton2 has already shown that it can give both Intel and AMD a run for its money in the server space when it comes to performance per dollar. The chip is using ARM's Neoverse N1 cores, so we know that ARM can definitely design powerful chips. ARM says that it will supply Cortex X1 cores only to those partners who have been a part of the CXC program from the beginning and that they would all get the same configuration of the chip. The company did, however, mention that it might consider customised solutions for different partners at a later date. At the moment, ARM has not disclosed who is eligible to receive the X1 cores.

It is shaping up to be a promising year for System on Chip technologies, with the 5nm process becoming commercially available by the end of the year. We can definitely expect Qualcomm to further tweak the performance of the Cortex A78 cores, but it would be far more exciting to see products that make use of ARM’s Cortex-X1 core.