Sundar Pichai and Satya Nadella to visit India this month 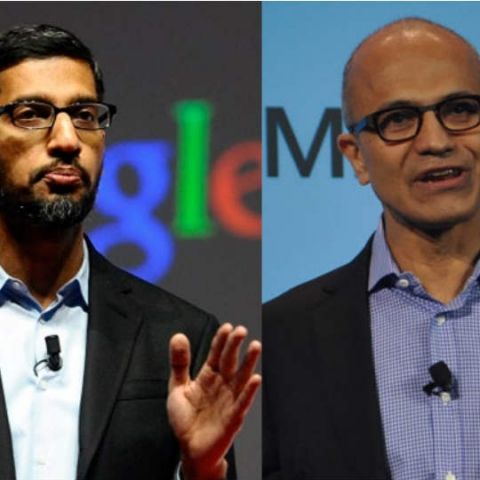 Google and Microsoft CEOs, Sundar Pichai and Satya Nadella, will be visiting India later this month. While Pichai is visiting the country for official purposes, Nadella is on a personal trip, but will spend a day at a start-up incubation centre called T-Hub, in Hyderabad. This will be Pichai’s first visit to India since becoming the CEO of Google.

Pichai is scheduled to meet Prime Minister Narendra Modi, and announce a number of India-centric initiatives on December 16, as part of the Digital India Initiative. He had earlier met the Indian Prime Minister at Google’s headquarters in Mountain View, back in September 2015. After the meeting, the company had announced free Wi-Fi services in over 400 railway stations in India, using RailTel’s fibre optic network. Pichai is expected to officially launch this initiative during his visit.

Nadella is on a personal visit to India for a few days, during which he would be spending time with his parents in Hyderabad. On December 28, however, he is scheduled to visit T-Hub, which was launched in collaboration with IIT-Hyderabad, Indian School of Business, and NALSAR University of Law. T-Hub is said to be the largest technology incubator in India, and houses about 130 start-ups. A top state government official told Business Standard, “He is coming on a personal visit to Hyderabad for four to five days. His only official programme is T-Hub visit.”

Nadella visited India last month as part of Microsoft’s Future Unleashed conference in Mumbai. During the conference, he discussed a number of topics and also showed of Delve Analytics, a tool for enhancing personal productivity and information discovery. It helps users visualise data in form of interactive charts and graphs. It also gives a live feed of the work happening in an organisation, thereby helping employers see the work that employees are doing, in real time. He also announced the launch of Microsoft’s new flagship phones, Lumia 950 and 950XL, and also the Surface Pro 4, which will launch in India, in January 2016.

In October 2015, Facebook CEO Mark Zuckerberg hosted a Townhall Q&A at IIT Delhi. During the event, he spoke about the importance of India to Facebook, his stance on Net Neutrality, and how Internet.org is helping spread internet connectivity across the world. He said, “We all have a moral responsibility for people who do not have access to internet. We should not end up hurting people who do not have access to the Internet.”