The Most Anticipated Tech Launches of 2017 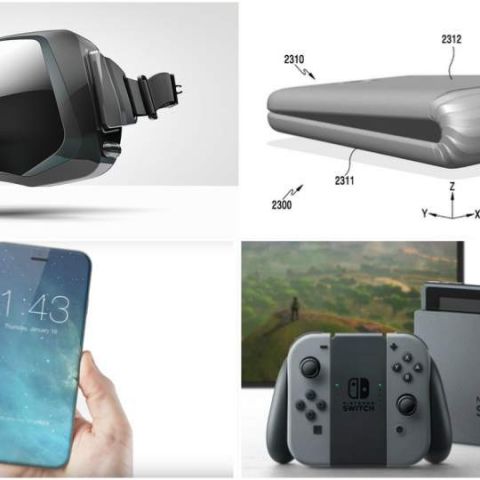 A Google smartwatch, refreshed BlackBerrys, the 10th anniversary of the iPhone, here are all the potential newsmaker launches of 2017.

We are now just a few days shy of calling it a New Year and 2017 already looks like a jam packed year for technology. While we have already summed up the tech trends expected to rule the coming year, companies also have an exciting portfolio of products lined up for 2017. So without further ado, let’s take a look at what’s in the pipeline. Here are the most anticipated tech launches of 2017.

After Samsung’s fiasco with the Galaxy Note 7, the South Korean tech giant is gearing up to redeem its losses (and its reputation) with the upcoming Galaxy S8 smartphone. Samsung is looking at launching the Galaxy S8 at a dedicated event in New York in April, but there are internal arguments about an early launch. According to ChoiceNews, the handset is likely to cost 15% to 20% more than the Galaxy S7, owing to increased prices of raw materials. The company also recently filed for a trademark on ‘Beast Mode’, which is expected to feature in the Galaxy S8. Looks like the device may get some powerful VR, gaming capabilities. Let’s wait and watch.

We recently told you that Blackberry has given TCL the rights to manufacture smartphones under its name. Now, as per hints dropped by TCL, the company is already set to showcase something “evolutionary” at the Consumer Electronic Show 2017. In a press statement, TCL announced that the company has plans to “unveil an evolutionary first in the mobile industry,” including BB phones. No other details have been revealed so far, but we are really hoping Blackberry phones get some life pumped into them in 2017.

2017 will mark the 10th anniversary of the original iPhone and Apple is expected to take full advantage of that fact. According to the Wall street Journal, Apple may bring about some big, distinctive design changes to the iPhone. Apple is reportedly working on three iPhones for 2017 with one of the models getting AMOLED display and a thin bezel-less design. However, considering Apple's launch cycle for the iPhone, we could also be looking at an iPhone 7s in 2017.

The Mountain View tech giant is planning to overhaul its Chrome and Android ecosystems in 2017. According to Android Police, Google is planning to leverage the Andromeda OS and make an all new laptop. Expected to launch in fall 2017, the new machine will show off Google’s revised vision of the Chromebook. The computer is also expected to be a hybrid, and function like a tabet as well as a laptop at the same time.

Microsoft revealed the required specifications for running its Virtual Reality headsets on Windows 10 systems. According to The Verge, the company has included a "Windows Holographic First Run" application in the recent test builds of Windows 10 to find if a machine is compatible. Word is that the company will launch VR support for all Windows 10 PCs as part of the Creators Update early next year. The company is reportedly creating its own VR platform using the Windows Holographic platform, which powers the HoloLens headset. Microsoft will be partnering with several manufacturers such as HP, Dell, Lenovo, Asus, and Acer to build the headsets.

Rumours of Samsung unveiling foldable phones have been doing the rounds for a while now. According to a report by ETNews, Samsung was to start mass producing foldable displays by the end of this year, with market availability starting in 2017. Reaffirming these plans, Samsung recently published a patent with renders of a phone that folds into half from the middle. Sounding rather futuristic, the device is expected to hit the market somewhere in 2017.

Nintendo’s puppy-faced modular console, Switch will also see its market launch in 2017. The new system can work as a console and a handheld gaming device. The device will be debuted on January 12 in a Tokyo event and is expected to hit the shelves on March 17, 2017.

At E3 2016, Microsoft gave the world a quick glimpse at its new, supercharged console, Xbox Project Scorpio. The console is aimed at 4K gaming, and is also tipped to support VR gaming. Microsoft's Xbox head Phil Spencer told the audience that Project Scorpio will have an 8-core processor, 320GB memory bandwidth and 6 teraflops of GPU performance.

A recent report by Android Police states that Google is in the process of designing its own smartwatches. The watches seem to have a circular interface and are reportedly codenamed ‘Angelfish’ and ‘Swordfish’. The watches are also expected to be powered by Google’s AI assistant called, well, Assistant.