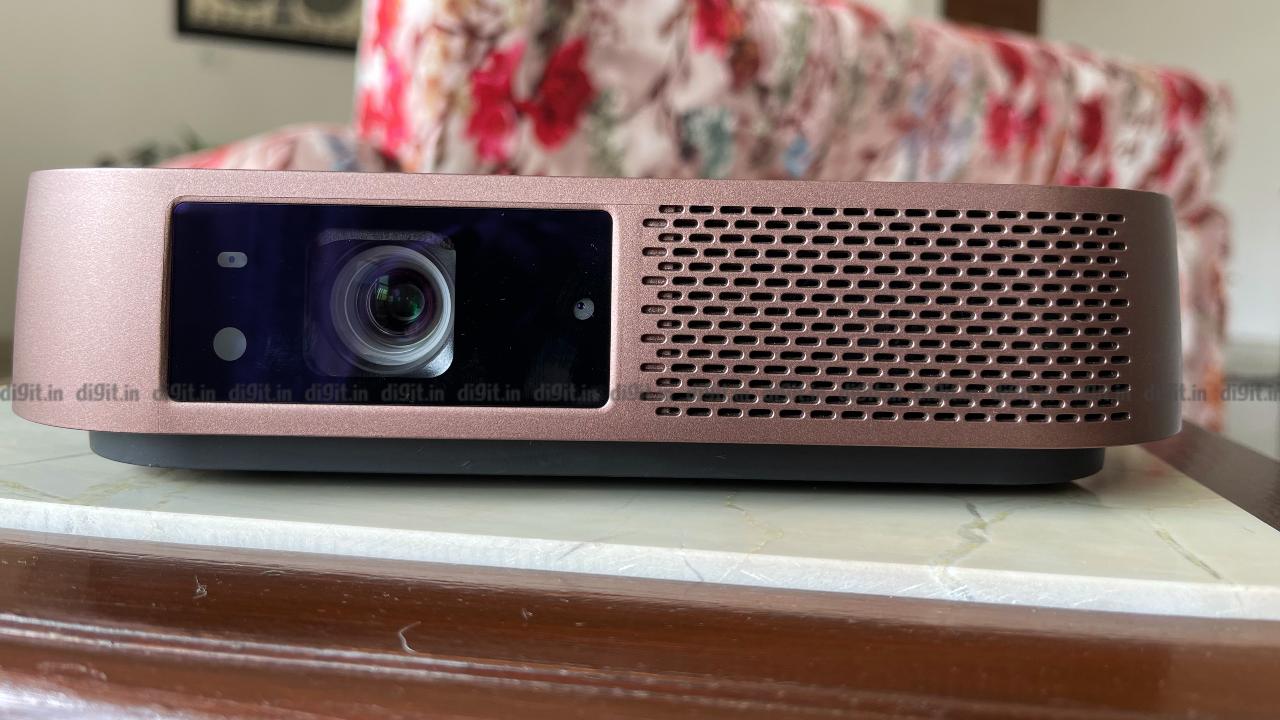 Unlike the M1 (review), the Viewsonic M2 is not a portable projector. Well, not in the traditional sense. It comes with a nice carrying bag, but it does not run on an internal battery. You can connect it to a USB-C power bank but the projector needs a constant source of power to run. The device has a Full-HD resolution and also supports HDR. But it is priced at a whopping Rs 85,000 on Amazon.in, 80,000 on Flipkart and Rs 76,000 on TataCliq as of writing this review. While there are a bunch of projectors from BenQ, Optima and even ViewSonic in this price range, is the M2 a worthy option for those looking for some form of “portability” in a projector?

The Viewsonic M2 has a square design with a black top and metallic brown design on the sides. The bottom of the device has three rubber feet along with the stand to tilt the projector. The mounting port is in the centre of the bottom of the projector. The bottom also has the housing for the Wi-Fi dongle. The finish of the projector is clean and elegant although the top can get covered in fingerprints easily. It’s minimal all around with the ViewSonic logo on the top and the ‘Sound by Harman Kardon’ logo on the left. The front has the lens along with the focus camera and all the connectivity options are at the back. 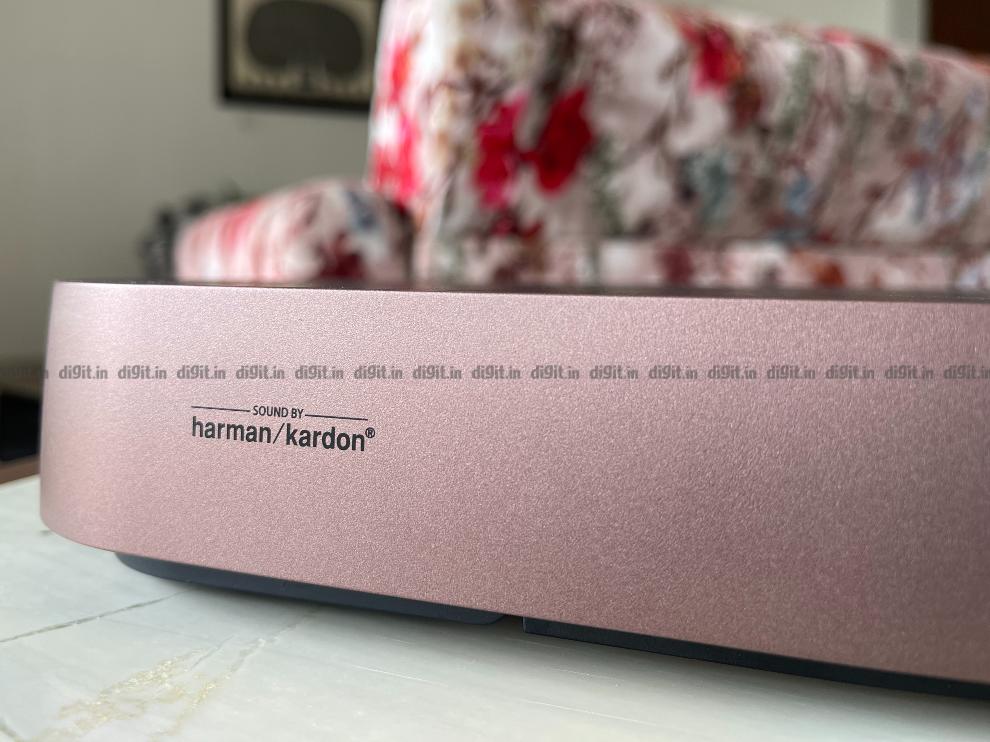 Speaking of connectivity, we have an HDMI 2.0 port with HDCP 2.2, USB-C port, microSD card slot, USB Type-A port and a 3.5mm audio port. There is also a power port along with an IR receiver. Surprisingly, you don't have to point the remote directly at the front or back of the projector as we’ve seen on others. Pointing it in the vicinity of the projector gets the job done adding to the convenience of ease of use. 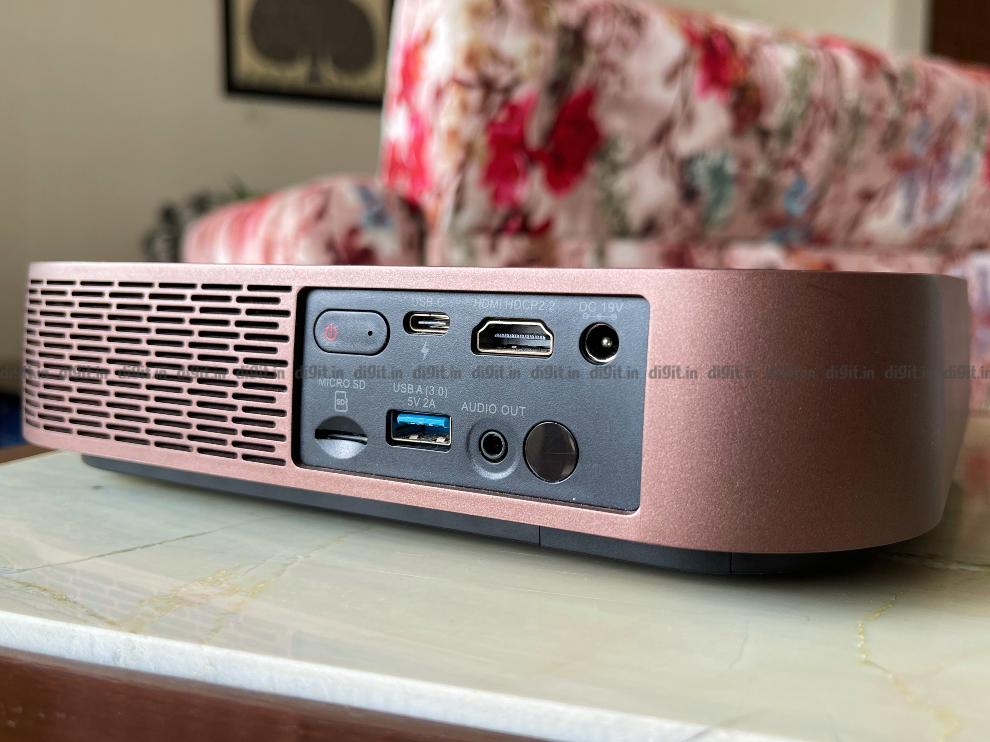 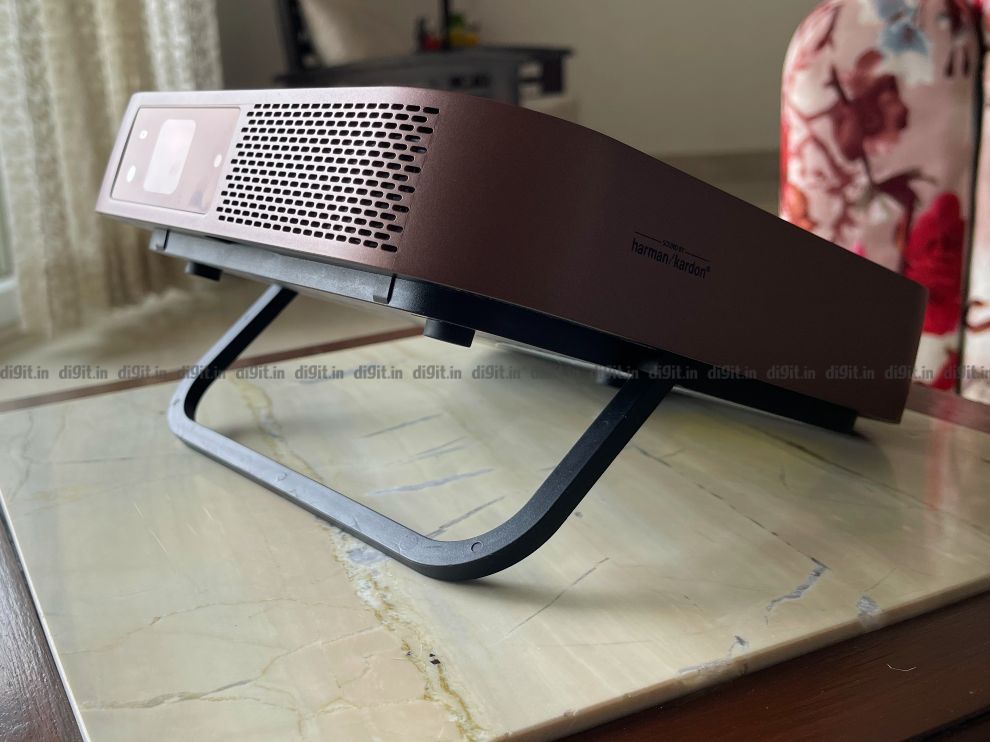 Overall, the projector has a premium build and is slightly heavy, considering it’s meant to be portable and has an elegant finish. The only downside is that there aren't any physical controls apart from the power button. So, you may want to ensure you don't forget the remote control.

Speaking of the remote control that comes with the projector, it is simple and minimalistic. The power and source buttons are right on top followed by a dedicated button for focus and settings. You also have navigation, home, back, Bluetooth and volume controls. The remote control is pretty standard, ergonomic and plasticky. It doesn't have the same level of finesse or finish as the projector and I think that's ok. 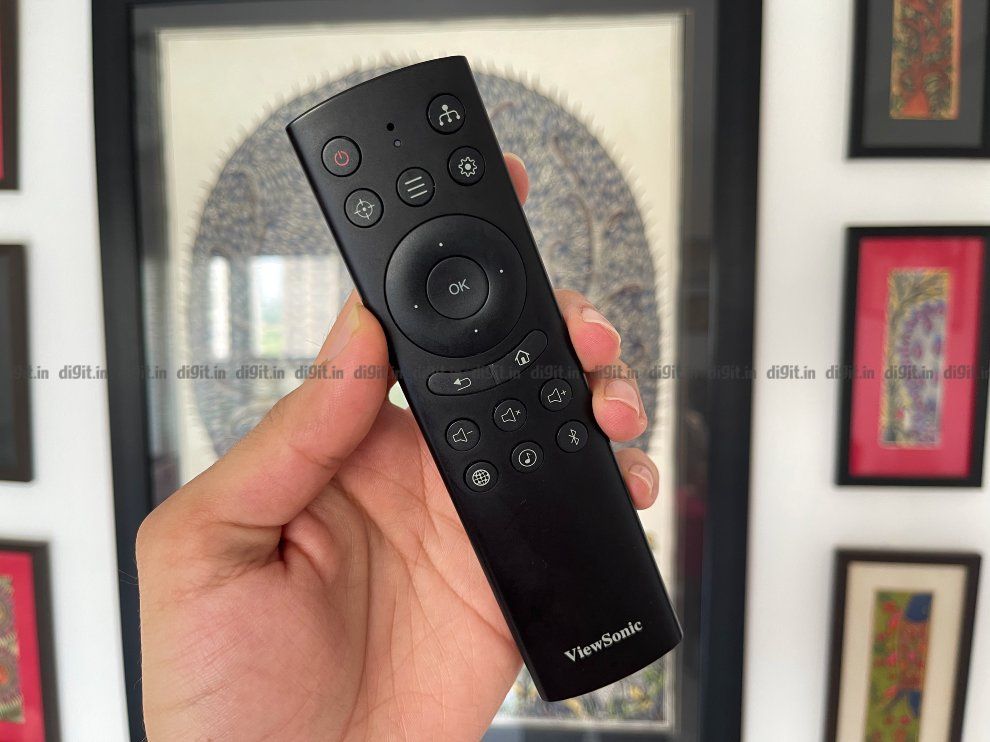 Before we jump into the performance, let's get the UI out of the way. The settings are conveniently divided into Basic Settings and Advanced Settings where the former has options like language, keystoning, focus, etc. and the latter has settings like audio, light source level, power settings and more. The UI is easy to navigate but the projector comes with the Aptoide store which leaves us with a lacklustre experience. Searching for VLC on the Aptoide store led to no results and the apps which are here offer a lacklustre mobile experience. 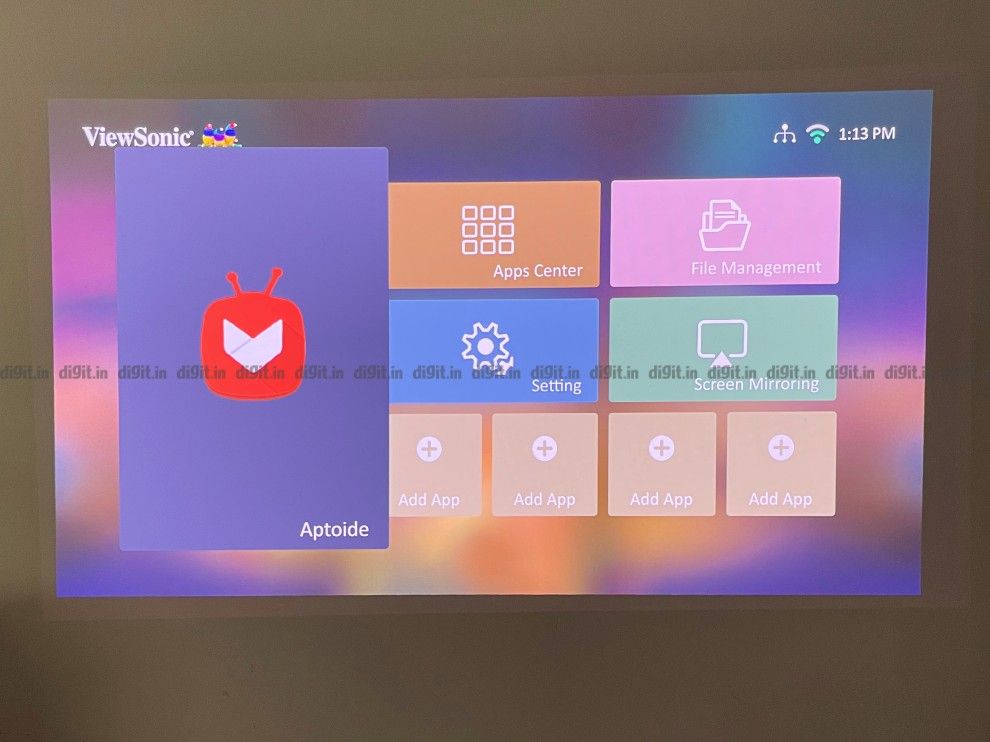 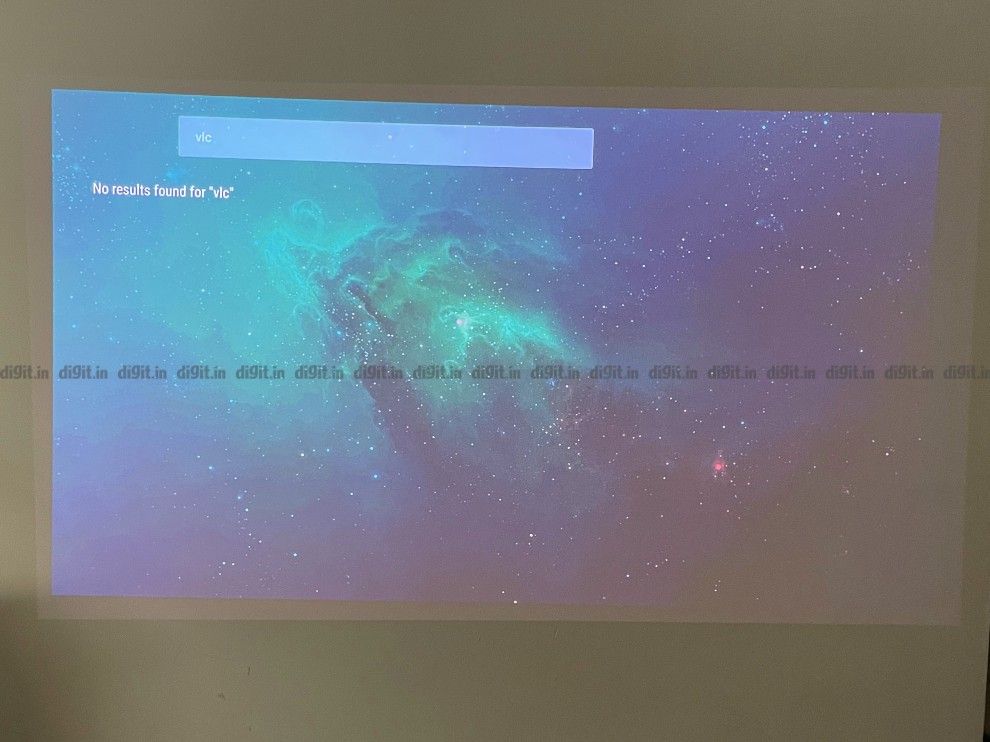 Screen mirroring from an iOS device was fine for watching family photos and videos. However, trying to stream wirelessly from services like Netflix, Prime Video and Apple TV app via the iPhone did not work. While YouTube worked, there was the occasional stuttering in the playback. Needless to say, you may want to limit screen mirroring to photos and videos stored on your device. Overall, while the UI works well for navigating the source and settings of the projector, its smart capabilities deliver a lacklustre experience, thanks to the Aptoide app store. You are better off connecting this to a Fire TV stick for OTT content.

When it comes to performance, the projector has some very strong points in its favour and also falls short in some departments. Kicking things off with the good stuff, the projector has some excellent and punchy colours, especially in a pitch-dark room. We played our standard slew of content from a Fire TV Stick (review) and the experience was quite enjoyable. In SDR movies like Mission: Impossible and Spider-Man: Homecoming, the colours looked very punchy. The projector has a bunch of presets ranging from Movie, TV, Game, User, Bright, etc and for the most part, we found leaving it on the Movie preset worked the best. It produced some punchy colours with accurate skin tones and lush environments for the content we consumed. 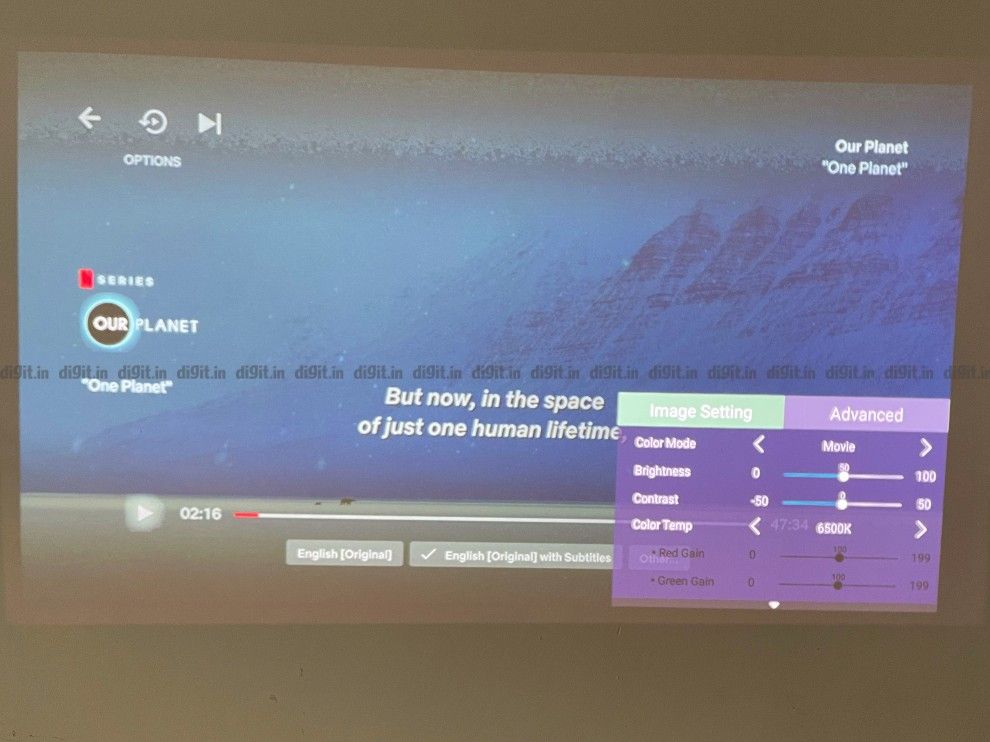 The projector also recognised content from Netflix and Prime Video in HDR and here too we got a very punchy experience with the colours, especially in the Movie preset. Moving over to Prime Video we played some Grand Tour Season 1 Episode 1 with the cars whining across the desert and here there was a massive hint of green in the desert. Apart from this one scene, the rest of the content in this episode was quite enjoyable. 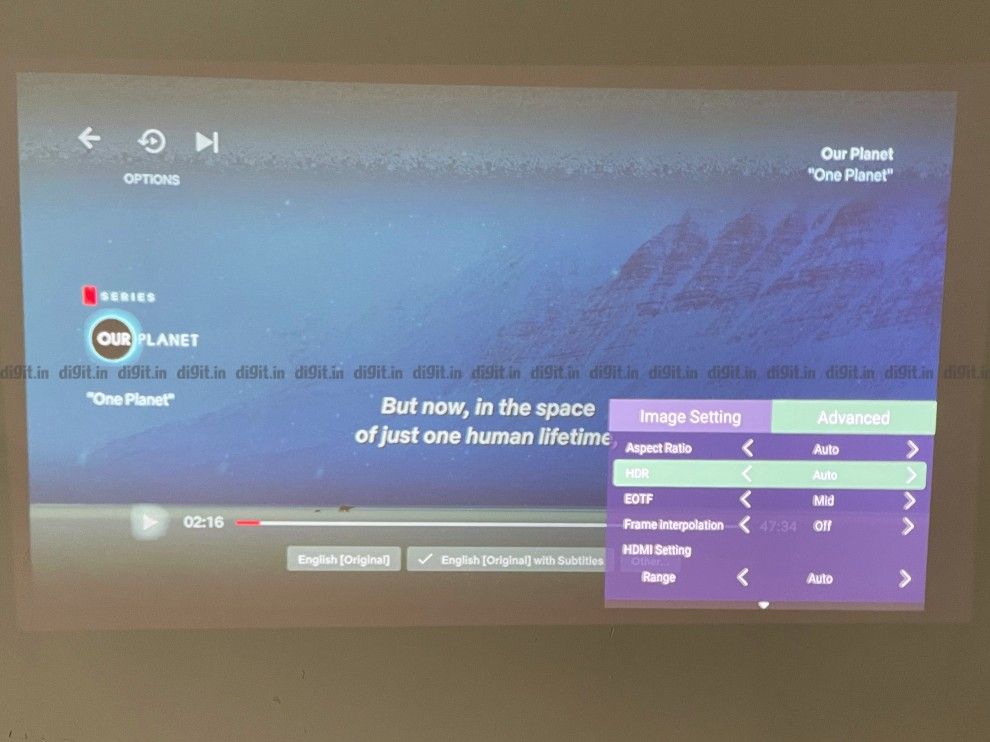 Even a show like Young Sheldon has some decent colour reproduction with skin tones and while you can change to the TV preset for content like TV shows, I think there are times when the movie preset also works fine for this content.

I did have a few hiccups with the performance of this projector and more than the picture performance it had to do with the settings. On multiple occasions, I couldn't get the picture preset settings to appear onscreen and the only way to fix the problem was to restart the projector. Another issue I faced was that sometimes the picture on the screen seemed to stutter. At first, I thought this was a buffering issue but it persisted and was most easily noticeable during slow panning shots. Restarting the projector fixed this as well. 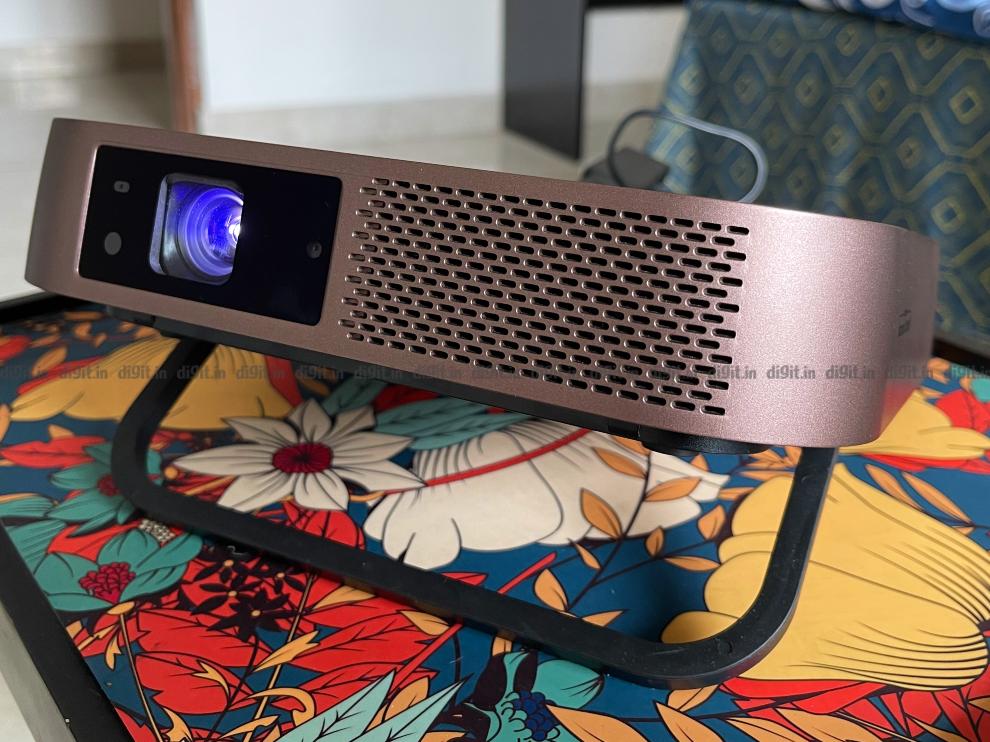 We blew the projector upto about 50-inches screen size on the wall and the details in the images were clear. Even during the day with the curtains drawn and a little bias light in the room, the projector performed quite well. Sure, dark sequences in movies suffered but shows like Young Sheldon or even friends looked fine.

Apart from the small hiccups, the picture performance of this projector is pretty good.

Moving over to the audio, this projector can get really loud. In a 12 x 14 bedroom, leaving it at 30 (max volume being 50) was enough to hear the vocals of people talking and the background score of the movies. While the speakers aren't the best, they are better than some of the other projectors we’ve tested that comes with built-in speakers. Sure, they lack bass and the sound can sometimes get quite tinny especially in mixed sequences, but for the occasional movie and TV show, they get the job done. 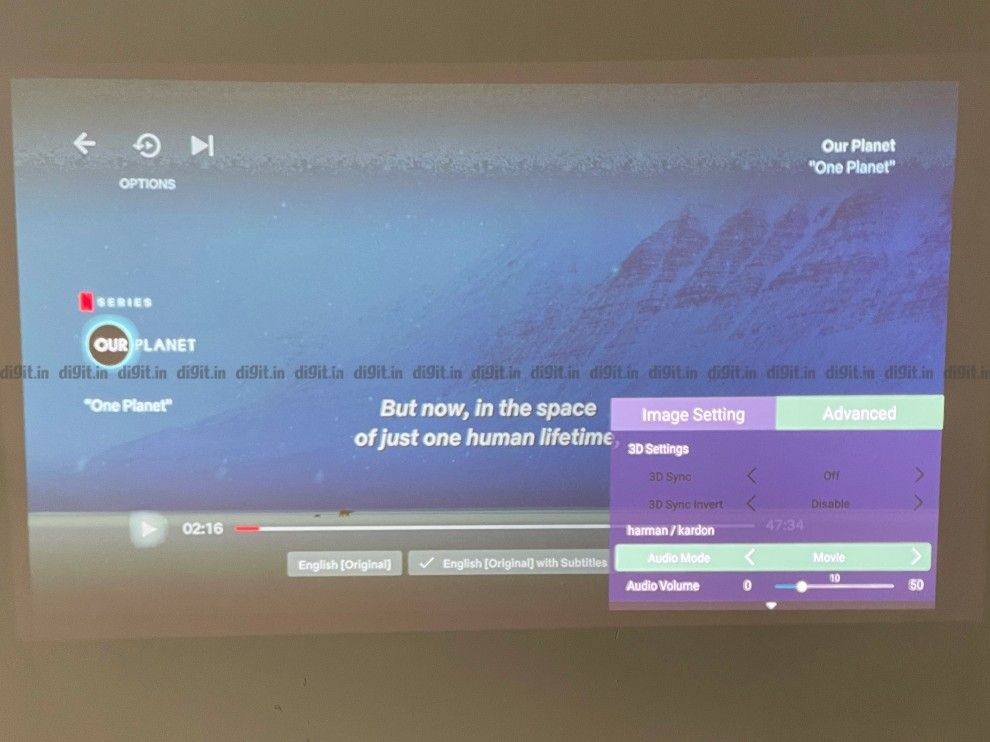 If you want content that has more vocals rather than mixed audio like TV shows or documentaries, then the speakers on this should get the job done.

While the Viewsonic M2 has a compact form factor, it isn’t exactly portable due to the lack of battery backup. The projector has a very good build with a minimal yet elegant design. However, the lack of physical controls on the projector leaves you relying on the remote control. The projector can produce some really punchy colours and also supports HDR, which is good. The audio output is acceptable considering the size. The UI works well for the settings, apart from the occasional bugs. The Aptoide store is the biggest weakness and to get the most from streaming services, you should connect a Fire TV Stick to this device. The projector is rated for 30,000 hours of use, which is more than what some other projectors claim. If you are looking for a compact projector to carry along with you, then you can consider this one. However, if you don't mind something a little bulkier, there are other projectors you can consider that offer a Full-HD resolution and some impressive performance for the budget of 70 to 80K.