The budget smartphone segment needed a good phablet and Xiaomi is the first to oblige. The company has done a pretty good job with the Redmi Note, but it is not without compromises. The smartphone fits the price that is being asked for it, but we have come to expect more from Xiaomi. Nevertheless, if you want a phablet at a budget and a value for money device, then look no further.

It's about time that companies like Motorola, Xiaomi and some others, become the benchmarks against which giants like Samsung are measured. These companies have proven enough times now that you don't need to compromise on the quality of a device even when you price it for the budget segment. So, before I go forward with this Xiaomi Redmi Note review, please note that the verdict may surprise you. Also, I will pay enough emphasis on the device's price.

So, without further ado, let’s get the ball rolling.

Of the three Mi devices that we have in India right now, the Redmi Note is definitely the worst looking of the lot. That is not to say that the build quality is bad, it is a sturdily built device and it does fit its price tag well. We have come to expect a lot from Xiaomi and the overuse of plastic on this smartphone makes it feel cheap. 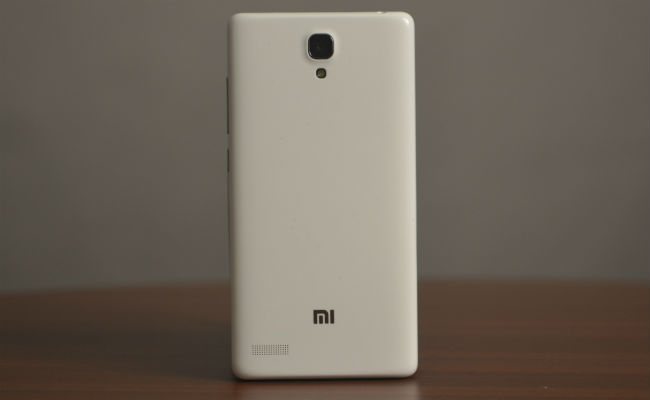 The problem here is not with the build quality of the smartphone, but rather, with the design. The bar design doesn’t look good and the phone is really thick. Add to that, the phone's weight, at 199 grams, makes it possibly the heaviest smartphone out there right now. To top it all off, Xiaomi went with an extremely glossy back (note that the Xiaomi Mi4 has the same), which makes it slippery and demands a cover, that will add some more grams to the weight and a few more millimetres to the thickness. See where the problem is? 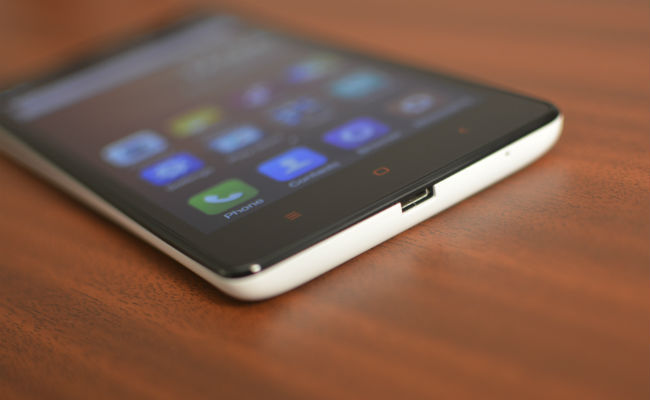 The overall build quality is not a problem as such, there are no unwanted creaks and it seems to be somewhat resistant to scratches, but the design needs a lot of work. The Mi3's design suggested that, for all intents and purposes, it was a premium smartphone at an affordable price, but the Redmi Note doesn’t quite fit that description. 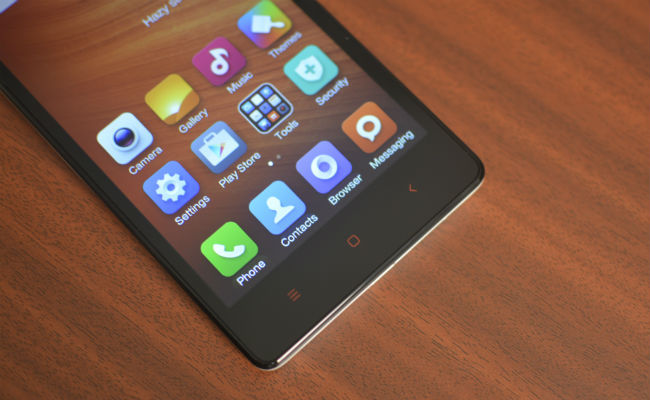 In addition, the Asus Zenfone 5 and Moto G (1st Gen and 2nd Gen) are better looking and feel more premium. In fact, even the mediocre looks of the Micromax Canvas Nitro, which costs Rs. 3,000 more, is better than this one.

5.5 inch HD isn’t something you see in the specs sheet of a smartphone that costs less than 10k, but that’s what the Redmi Note boasts. However, like the Mi3, this display is quite dim and reflective and not well suited for use under direct sunlight. The viewing angles are fine, with not much to complain about. 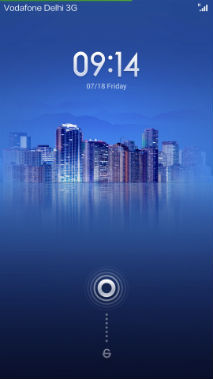 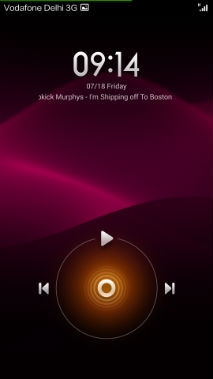 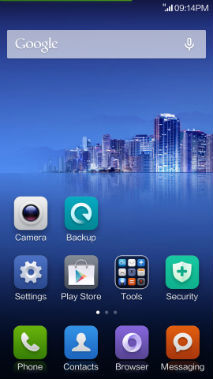 MiUI 5 covers the UI elements of the device and you can read all about that in our MiUI review.

The make or break moment for this smartphone is in its performance. While the Redmi Note didn’t show the heating issues or other problems that the Redmi 1S originally had, there are a few concerns. To start with, the MediaTek MT6592 SoC is a power hungry SoC, which means that the 3,100 mAh battery isn’t able to do its job. But more on that later.

Octa-core chipsets mean that your phone will be able to handle multitasking quite well and the Redmi Note does that. The problem though is in the graphics performance and Android 4.2.2 Jelly Bean. The memory management in Jelly Bean is inferior, which leads to some stutters and lags. The good thing is that the company went with 2GB of RAM, which makes up for the memory issues a little bit. This brings me back to the point that the Redmi Note fits its price, but doesn't exceed expectations. 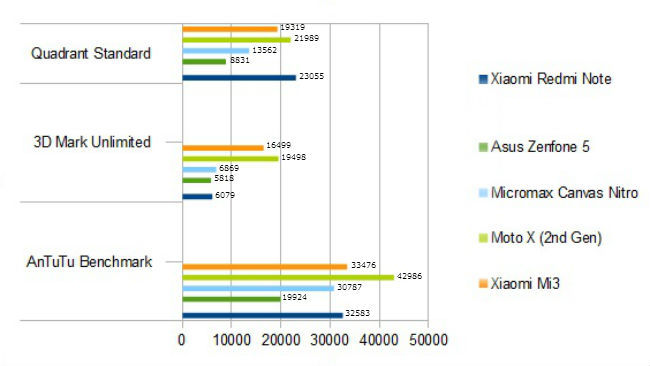 The octa-core processor and 2GB RAM together churn out good benchmark scores, but that is not reciprocated in the real world. I would much rather prefer a Zenfone 5, which delivers decent performance uniformly, than the Note, which gives me slightly higher performance but with stuttering. The Redmi Note won't give you bad performance, but we expected more from the spec sheet, especially considering that the Micromax Canvas Nitro does wonders in the performance department with this same SoC.

So, while the Redmi Note does well in synthetic benchmarks, the real world performance isn’t quite the same, which is disappointing. The decision you have to make is how resource intensive your usage is and whether the trade off is all right for you.

In our quick review of the Redmi Note, we talked a bit about the camera quality. As we mentioned there, the camera is definitely a good one, but not the 13 MP shooter that the Mi3 had. We’ve said before that Xiaomi seems to have nailed the image processing algorithm and the same can be seen here.

The camera is very good under bright sunlight and handles white balance and colour reproduction quite well under almost all conditions. Unlike the Mi3 though, it comes at the cost of noise. Photos shot by the Redmi Note are noisier as compared to those from the Mi3. Don’t get me wrong, the camera is still more than what you can expect for Rs. 8,999, but it’s not the stellar snapper that we’ve seen from Xiaomi before.

The phone's video recording capability is also good under outdoor sunlight, but it's below par when recording indoors under fluorescent lights.

As mentioned in the performance section above, the MT6592 is a battery hungry SoC so it's no surprise that Xiaomi didn’t compromise in terms of battery rating. The company made the right decision to go for a 3100 mAh battery on this smartphone and anything less would have been disastrous. The large capacity suggests that you should be able to get a lot of juice out of this device. However, during regular use, I couldn’t get it to last a full day, getting to around 10 hours at best. This is unacceptable, especially considering that this is a phablet. 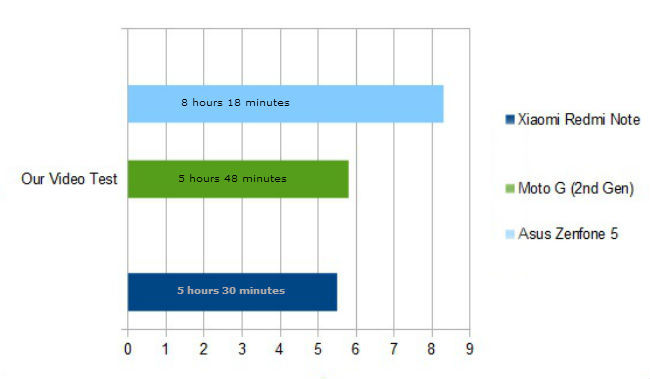 Both the Micromax Canvas Nitro and Asus Zenfone 5 provide much better battery life than this. In fact, in our battery test, the Nitro lasts for well over 10 hours, the same as high-end phones like the new Moto X and the Samsung Galaxy Alpha. The Redmi Note on the other hand got to five and a half hours. The PC Mark for Android battery test gave a time of 4 hours and 40 minutes. The battery performance is unimpressive and only those who engage in light activity on their phones will be able to make it last the day. 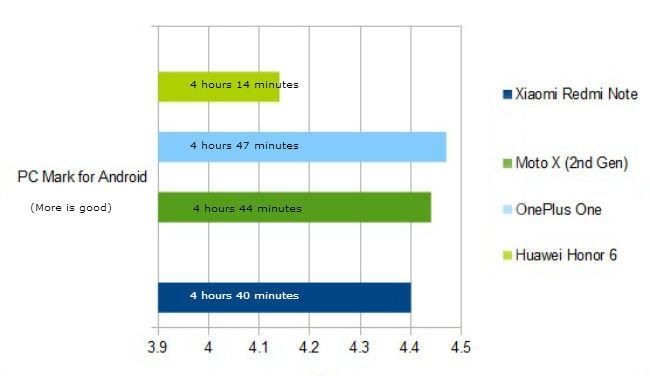 The budget segment was missing a phablet till now and the Redmi Note fills that gap. If you want a phablet within a below 10k budget, then go ahead and buy this, but don't expect it to be a premium device for a low price. The Redmi Note is strictly a value for money smartphone and one that was missing in the lower price range till now. There are other devices in and around this range (Zenfone 5, Canvas Nitro, Moto G- 2nd Gen), which provide similar performance and the Redmi Note isn't the runaway success that the Xiaomi Mi3 was.

Overall, the Redmi Note is a good device and one that offers value for money, but we have come to expect more from the Chinese startup.