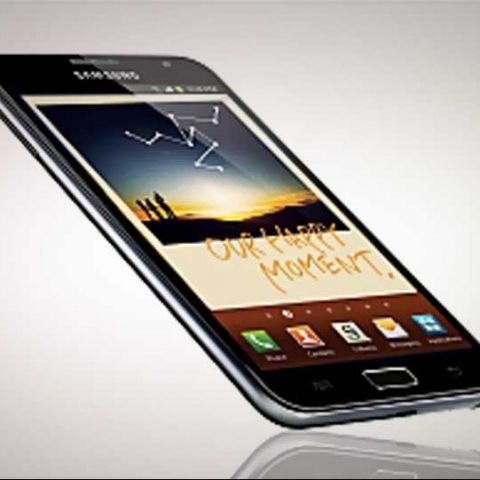 It is neither the smartphone, as we know it. Nor it is the tablet, as we know it. This is the perfect example of the hybrid device - slots in perfectly between the smartphone and tablet. While it may not appeal to everyone, the performance boost is undeniable. The Note pricey, but at the same time it is a niche device as well. Meant for those who find a tablet too big, but at the same time, find the 4.0-inch smartphones a little too small!

In a world that is still grappling with the idea of how the smartphone and tablets will co-exist, Samsung has decided to introduce a a model in the slowly growing hybrid category. The limited demographic of tablet users aside, the masses still use their smartphone for most tasks the tablet would do. So where does the Samsung Galaxy Note fit in? Is it a bigger smartphone? Or is it a smaller tablet, walking the same path as the Dell Streak did sometime back. Is it really the perfect compromise between the tablet and the phone?

Look & Feel
As we had remarked in the First Impressions article we had done the other day, the Samsung Galaxy Note is BIG! Till now we had considered 4.0-inch display smartphones as big, but the Galaxy Note with its 5.3-inch display just puts them in the shade. Quite literally! Despite the bigger footprint, it doesn’t weigh too much, and manages to remain quite slim as well. Surprisingly, it is easy to use it with the same hand that is holding it.

Minimalist is a theme we have come to expect from Samsung, at least as far as the Galaxy range of handsets is concerned. And that same trait is visible here as well. Just below the display is the homescreen button, flanked by two touch keys for menu and return. We had seen this with the Samsung Galaxy SII as well, and thankfully that continues here as well - you can set the lighting behavior of these keys. Some smartphones crucially miss out on this nifty feature. The Samsung Galaxy Note has a front facing camera and a light sensor right next to the earpiece, but are a little difficult to notice at first!

The volume rocker is on the left side panel, while the power key sits towards the top of the right side panel. On the top is the 3.5mm audio jack, while the micro USB port is at the bottom. Flip the Note over, and there is the 8MP camera with the LED flash. While reviewing the Galaxy Note, we were disappointed with the battery cover opening mechanism though. The use-nail-to-prise-open routine doesn’t do justice to an expensive device like this. Secondly, the cover isn't very thick, and I would be paralytically worried of it breaking. And this is the same Samsung who made really classy mechanisms in the Omnia W and the Wave III. So Samsung, why this sudden madness?

During the review of the Galaxy Note, we discovered that the camera placement is a bit of a worry as well. When the Note is kept flat, the camera is touching the surface on which it is kept. It’ll inevitably get scratched badly.

These two flaws aside, the build quality of the Samsung Galaxy Note is very good. There aren’t any rough edges to the product, and most importantly, it has kept its weight and size in check. The very fact that you can type an SMS with the same hand that is holding the phone is a huge achievement in itself.

Features & Performance
An ARM Cortex A9 dual core 1.4GHz processor powers the Samsung Galaxy Note. The processor gets help from 1GB of RAM. The grunt on offer is just off the charts. We don’t want to bore you with how quickly the applications opened, and how the phone remained equally responsive even with multiple background apps open! Just take a look at some screenshots of the benchmark scores for yourself.

Continue reading the Features and Performance of the Samsung Galaxy Note, and our verdict, on Page 2...

However, the real crowning glory is the 5.3-inch Super AMOLED display. During the review, first thing we noticed when comparing the Galaxy Note to the Samsung Galaxy SII is that the colour richness has been toned down. Good thing, since the red colour isn't overbearing anymore. However, black levels are excellent, and don’t look grey anymore. Watching videos on this display is quite an experience. The sharpness levels are quite good, which helps a lot with how clear the text is. Of course, the big display means that text size is anyways bigger, but the added crispness does help with readability. The viewing angles of this display are not that great - let down by the reflective nature. Any and all ambient objects will be reflecting off the display, if you look at it from a side angle.

Carrying forward from the display, the Samsung Galaxy Note does deliver in the media bit as well. We transferred some .MKV (720p and 1080p) as well as some .AVI to the device. No need to install any third party media players, since the default video player played back all files without any problems. The video viewing experience, as we have mentioned earlier, was an absolute delight. While watching a video o listening to music, you will get the 5.1 channel setting activated only if you are using headphones or connected the phone to external speakers. Speaking of which, the built-in speaker isn't loud at all. In fact, it is barely enough for a small-ish room. Take the Galaxy Note outside for a call or to listen to music, and it is barely audible.

Samsung has added its own layer of multi-touch gestures. For example, place two fingers on the screen, and tilt the Galaxy Note towards you or away from you to zoom in and zoom out. This works well with web pages and when browsing images. Slightly weird to be seen doing that with a phone - looks like you are about to strangle the poor Galaxy Note! But full marks for ingenuity, and the feature works very well.

Ah, yes! The Stylus! How can we forget that! Android is bringing the stylus back into fashion. More to the point, the Galaxy Note is. It has been ages since we last saw a Symbian or a Windows Phone device that used a stylus. And Samsung calls it the S-Pen. Nicely docked away within the confines of the Galaxy Note, at most times you wont even notice it is there. A very useful feature, if you wish to draw or add elements to a photo. A nice feature to have, but you wont be using it too often.

During the Galaxy Note review, we were pretty surprised to see the GPS signal lock on even indoors, and pinpoint the location correctly. And mind you, this wasn’t the network assisted location bit working here - had removed the SIM card from the phone before that. This is something almost phones we have reviewed struggled with.

Pre-loading apps on phones is something that we have learnt to not crib about! We must appreciate how streamlined the app structure is this time around. The number of Hubs have been reduced to two - Social and Reading. Social Hub just makes it comfortable to access Twitter and FB timelines within one app, while the Social Hub makes a lot of sense - reading is a much better experience on this big display device. However, you cannot access the Samsung Apps store unless there is a SIM card in the device, nor can you check for a software update. This is something that is an unnecessary feature. For updating the phone, you will also need to sign up for a Samsung ID. Again, this is completely unnecessary.

The battery life is absolutely delightful. Two days of usage went by - calls, messages and constantly connected to the WWW, and the battery still had some juice left. With judicious use, this one will last quite a long while. Even with heavy use, expect 1.5 days to 2 days of backup, atleast.

Our Take
The Samsung Galaxy Note is a device aimed at the discerning user - someone who knows he doesn’t want a tablet, but wants a bigger smartphone experience. With the 5.3-inch display, the Note does solve that requirement. We are reminded of the Dell Streak, which also has a 5-inch display, and was called the baby tablet. We would so far as to say that the Note is closer to the tablet than the smartphone, except that it allows voice calls in the traditional fashion. Additionally, excellent performance, superb display and great battery life are on offer. The S-Pen just might bring out the artist in you!