Nokia X7 - Superb looks, but doesn't have much elseï¿½ Review 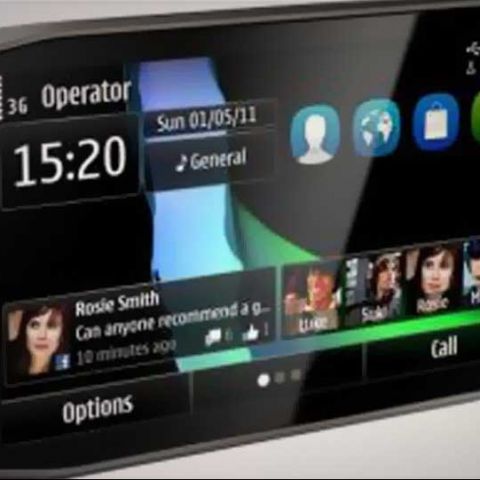 The Nokia X7 is quite a unique looking phone, and kudos to Nokia for finally getting aesthetics right, at least for the most part. At 20,000 bucks, it lands slam bang in the hottest price bracket in the smartphone market - and therefore also has to contend with the most competition. Unfortunately, it doesnï¿½t stand out in its price segment. While Symbian Anna gives the X7 an edge over the N8 (in terms of performance), it still remains strictly for those who find its looks appealing, or Symbian/Nokia aficionados.

BUY Nokia X7 - Superb looks, but doesn't have much elseï¿½

If you have Rs 20k to spend on a touchscreen smartphone, the choices are just endless. A gamut of solid Android phones - Samsung Galaxy S (S-LCD version), Samsung Google Nexus S and the LG Optimus Black, are available. Plus, let us not forget that the ageing Apple iPhone 3GS is now available for around Rs 19k after the recent price reduction. The Nokia N8 is hovering in the vicinity, but age seems to be catching up with it. The Samsung Wave II with the updated Bada OS is yet another option. As you can see, the X7 has no dearth of competition.

However, Nokia has a lot riding on the X7, particularly after the focus on updating Symbian^3 OS.

The Nokia X7 looks superb. It has edgy looks, with the corners angling inwards giving it quite a futuristic look. The sides are also at an angle – curved inwards towards the rear panel. It seems like there are speakers hidden away on all four angled corners, but actually, there are only two the other two are evidently for uniformity. The mixture of plastic and aluminum does give the phone a classy look. The 4-inch display at the front is paired up with 1 hardware key, essentially the Menu button. The area around the display, including the key is all completely glossy black. The right side panel has the volume rocker and the dedicated camera key. The left side panel is where the interesting bit is. Carrying forward from the trend set by the Nokia N8, the SIM card slot is on the left side, and so is the microSD card slot. Push them in from one side, and once the other end emerges out, immediately focus all your energy and precision on pulling out the slot. The slide out mechanism isn’t very smooth either, and it tends to get slightly stuck.

Now, once the slots are outside, put the SIM card or the microSD card (depending on what slot you have just pulled out) into it, and send it back in the way it came out! The rear panel doesn’t open, and just like the N8, you cannot access the battery. What we don’t really understand is the point of such a design. Because Apple does it with the iPhone doesn’t really mean that it is the correct thing to do, and that Nokia should copy that! In a nutshell, the X7 looks very good, and the aggressive and edgy design tones do suit it well. The build quality is excellent, and the phone feels like a lot more expensive than it actually is. However, a couple of issues with ergonomics do sully the otherwise good package.

Symbian Anna is the much-awaited update to the otherwise mediocre Symbian^3 OS that we first saw with the Nokia N8 towards the end of 2010. Nokia have been quite aggressive with how they are pitching the “new” OS as a real competition for Android. We saw it first with the Nokia E6 (where it incidentally is competing with the Blackberry 6 OS), and the rejigged icon set, improved performance and the updated web browser impressed. What is missing, still, is that the ability to have widgets in different sizes. If our memory serves us correctly, Nokia had been severely criticized for the widget size limitation in Symbian 3. But that hasn’t been corrected yet. While this limitation wasn’t very visible on the smaller display of the E6, the 4-inch display on the X7 does bring that to the fore.

With more powerful processors powering the rivals, the 680MHz, ARM11 processor does feel a bit lightweight. 256MB of RAM isn’t a lot either, making us wonder if Nokia were focusing more on specs – manufacturing price bit, rather than the actual performance. Even a year and a half old HTC Legend smartphone has 384MB of RAM. While people may argue that the OS is different, but the reality is that the difference can only take a phone so far. When multiple apps are opened in the background, the load on the system is pretty much the same.

Read more about the phone's performance, and our verdict, on the next page...

There really is no other way of putting this – the X7 isn’t a performance phone at all. A 680MHz processor with 256MB of RAM is a bit of a disappointment. While some may argue that the Anna update has changed things, the reality is that this change has only happened up to a certain level. It isn’t a doubt that the ‘previously bloated’ Symbian^3 is much improved now, but the fact that the processor has limited grunt, and the RAM gets utilised too quickly does have an impact on performance. At first, the interface is pretty smooth, and apps open up in a jiffy. However, as the background load increases – with mails, social networking apps, IM clients, web browser etc., and the slowdown becomes visible. The interface becomes sluggish, new apps take longer to open, and open apps become slow to respond. To work around this problem, you can close all, or at least most background apps, but then again, what is the purpose of a multi-tasking smartphone?

Moving beyond this disappointment, the 4.0-inch AMOLED display is quite good. Colours are appreciably distinct, but do lack a bit of punch in terms of vividness. The crispness is quite good, and shows in the clarity of the text - with its 640 x 360 pixel resolution. The brightness is quite solid, so much so that turning it up too much may lead to the display becoming uncomfortable to use.

The touchscreen works excellently, and the response is pretty even throughout. This helps while typing an SMS or mail. In portrait mode, the QWERTY keypad does feel a little cramped up, but if you type carefully, the accuracy is pretty surprising! In the landscape mode, the keypad is just very good anyway.

The updated web browser is one of the really good things to come out with the Anna update. Web pages render quicker, and smoother. Pinch zoom works in a smoother fashion and the text usually fits well within the window. We had praised this update even when we had reviewed the E6, and the same love continues here!

The X7 has an 8MP camera, with 720p HD video recording. The dual LED flash is real value add, realized when you end up clicking pictures in a not-so-good lighting scenario. The dedicated camera button makes clicking easier. The picture quality is pretty good, with lots of sharpness and enough depth to make images look lively. Videos are smooth as well, but the only issue was a slight judder in case you were panning the video from a particular scene to one that is even brighter.

The X7 does tend to become a bit hot when browsing the web, or chatting on the phone for a long time. The metal back does induce some sweat on one's palms.

Battery backup is very good, and full marks to Nokia here. Contrary to the general trend across big display touchscreen phones, the X7 offers 2 full days of backup. This includes connectivity to Wi-Fi/EDGE, apps syncing in the background and a mixture of calls and texts. While two days may not seem like a lot, but compare that to the one day that most Android phone tend to offer.

Call quality is pretty good, but the voice (of the other party) does tend to break a little bit if the signal comes below 50%. Both the earpiece and the handsfree are pretty loud, and don’t lose out on clarity either.

Symbian Anna is like a completely new OS, in some respects. While Symbian^3 showed that Symbian is here to stay, the Anna update has gone a long way in bringing it closer to Android. The problem however is that while Symbian was catching up with Android, Android was in turn walking away even further. There is still quite a long way to go before Symbian truly comes on par with the smartphone OS from Google, and Apple. But the revamped interface does look slightly better than before. Most importantly, the performance has improved. The interface responds well to touch commands, and apps open up quickly as well. However, Nokia’s Social app needs a complete overhaul – poor design, literally no configurable features and no integration with the contacts.

What the Anna update brings back is a sense of solidity to Symbian^3. And we hope that this continues forward. However, with Nokia’s focus now on Windows Phone 7, it will be interesting to see at what pace Symbian gets developed. However, speaking of the X7, the smartphone does offer some hope for the hardcore Symbian/Nokia fans. While it isn’t a performance phone at all, this one does better overall, compared to the Nokia N8, except for the camera – the N8 has an excellent 12MP unit with a mechanical shutter.

We would suggest you take a look at the rivals – the Samsung Galaxy S (much better display and a way more powerful phone), the Samsung Google Nexus S (powerful phone with the latest Android updates promised), the LG Optimus Black (good overall performance) and of course, the Apple iPhone 3GS - all of which are available for the X7-00's price on the streets.

Nokia X7 - Superb looks, but doesn't have much elseï¿½

Nokia X7 - Superb looks, but doesn't have much elseï¿½