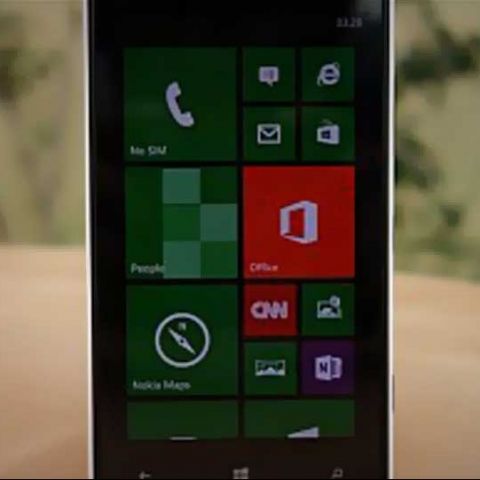 The Nokia Lumia 820 is a very competent phone, and there is no doubting its consistency in terms of performance. The unfortunate thing for the Lumia 820 is the fact that the Lumia 920 gathers all the attention, and this remains as a footnote. For these specs, Nokia should essentially have pegged this in line for competition with the HTC Windows Phone 8S. Instead, with a MOP of roughly Rs. 27,500, the Lumia 820 is overpriced.

Somewhere between the excitement of the Lumia 920 and the potential of the Lumia 620, the Lumia 820 got lost in the noise. We believe it is a very competent smartphone, particularly if that is what the outer limit of the budget is, and Windows Phone 8 is all you want. Unfortunately, we think it is priced higher than what it actually should have been.

Build & Design
With the Lumia branding, you do expect a certain amount of finesse and class, at least as far the looks and the build quality of the device are concerned. The Lumia 820 does well in certain aspects, but disappoints in other regards. Fish it out of the packaging that is reminiscent of that of the Lumia 800 and the Lumia 900, and you have a fairly compact 4.3-inch display smartphone. We say compact, because we have been playing with big display phones for far too long now! A glance around the phone brings out the usual suspects. Below the display are three touch sensitive keys – return, home and search. The left spine is completely clean, while the right spine is populated with the black coloured volume rocker, the power key and the camera key. The bottom spine has the micro USB port and the handsfree speaker, while the top has the 3.5mm headphone jack.

Flip the phone over, and the enamel white polycarbonate does look fairly good quality. There are multiple colour options on these removable panels, which should keep the phone’s look refreshed, if you so desire that. However, it does miss out on the soft feel finish that the HTC 8X has, or even the Lumia 800 and Lumia 900, to a varying degree. While we appreciate the thoughtfulness going behind the idea of making this back cover replaceable, there are a couple of problems with the way this has been implemented. The plastic is a tad too hard, and coupled with a mediocre opening mechanism, the idea is ruined. You need to force a nail between the display and the panel towards the top right side, and then hope for the best. And that includes hopefully not breaking the damn nail!

The build quality issues aside, the 4.3-inch display size and the rounded spines make the Lumia 820 very comfortable for single hand operation. Albeit with a rider – the lack of a soft feel finish on the back means the Lumia 820 can slip out of a moist hand, or if you aren’t careful generally.

Features & Performance
The spec sheet is fairly acceptable all along, except for the display. And we will touch upon that, before looking at the rest of the features on the Lumia 820. While Windows Phone 8 has removed any restrictions that the manufacturers would have faced in trying to deploy higher-res screens, Nokia decided to walk the old path. There is the 4.3-inch AMOLED display with 480x800 pixel resolution. Incidentally, the Lumia 900 also has the same resolution with the same size AMOLED display. And it is currently retailing for much lesser than the Lumia 820 would. Basing this decision on the fact that the phone does have a newer OS is just not right. Having said that, we must say that the overall display quality is acceptable. The deep black levels help the colours look rich. Text is fairly crisp, and while the display is reflective, it shouldn’t ideally hamper usability. Having said that, there are only three brightness settings – low, medium and high. Overall, while this display works, we expected something better. Particularly in the price bracket this phone is playing in.

Windows Phone OS has always had the advantage of being nimble even on hardware that may be considered low spec for most Android phones. The Lumia 820 has a dual-core processor clocking at 1.5GHz along with 1GB of RAM. The critical bit is – Windows Phone 8 does not feel any heavier or resource hungrier than the Windows Phone 7.5 we saw on Lumia 900, which was powered by a single core processor and had just 512MB of RAM. System performance is quite good, and no issues at all with any slowdowns under the same app load that we use to test phones.

Memory expansion, or the lack of it, was big deal for the previous generation Windows phones. That has been solved this time around, and the Lumia 820 comes with 8GB internal storage and a micro SD card slot for up to 64GB more.

Call quality is more than acceptable, and this is pretty much at par in terms of signal reception to the Lumia 900. The earpiece is soft, and while it is quite loud, you will feel the need for a little more volume if you are speaking on this while walking down a busy market alley. The handsfree speaker is loud enough for hosting a conference in a small-ish room, and that’s about it.

The Nokia Lumia 820 comes with a 1650mAh removable battery. The backup times offered by this brick, when used as a primary phone, is a day and a half comfortably. The wireless charging option is available for Lumia 820, but for that, you will need to buy a back cover shell and one from the wireless charging plate or the fatboy pillow. At the time of writing this, the prices for these accessories are still not revealed on Nokia India’s online store, but do not expect this to come any cheap.

For anyone who finds Android slightly complicated, the sense of familiarity between the Windows Phone 8 and the Windows Phone 7.5 is something that is commendable. That, for one, will not be a stumbling factor in case someone is considering an upgrade to the latest generation Windows Phone devices. The lack of quality apps on Windows Phone is not crossing the line of being funny to being ridiculous. BlackBerry, before and after the launch of the BB10, is still aggressively pursuing app developers to bring all the popular apps on the platform. The result – apps like Whatsapp, Skype and even Amazom Kindle are now available for BB10. So much so, BlackBerry is still actively pursuing Instagram to get a BB10 app soon. Compare that to Microsoft and even the Windows Phone 8 handset manufacturers, they are sitting calmly, almost with the air of being arrogant. The amount of rubbish available on Windows Store is not funny!

This is not a PureView phone, and that is something we wanted to specify straightaway. The 8MP camera is definitely an improvement over the Lumia 800 and the Lumia 900, which suffered considerably when clicking in low light. The Lumia 820 does much better in that respect, with no blue tinge ruining shots. In good lighting conditions, the camera does fairly well, with adequate colour richness and a fairly crisp shot, even in areas around the edges. The video recording can be 1080p, but you have to manually set that in the camera setting, because the default is 720p.

Bottom Line
The Nokia Lumia 820 is a very competent phone, and there is no doubting its consistency in terms of performance. The unfortunate thing for the Lumia 820 is the fact that the Lumia 920 gathers all the attention, and this remains as a footnote. And also because Nokia’s focus on the Lumia 920 meant the 820 has not been paid much attention – something can be made out when you look at the ridiculous price tag placed on this phone. For these specs, Nokia should essentially have pegged this in line for competition with the HTC Windows Phone 8S. But it is available in the market for around Rs 27500, and that is too much for this phone. Unless you are like an obstinate kid who only wants the Lumia 820, and nothing else.