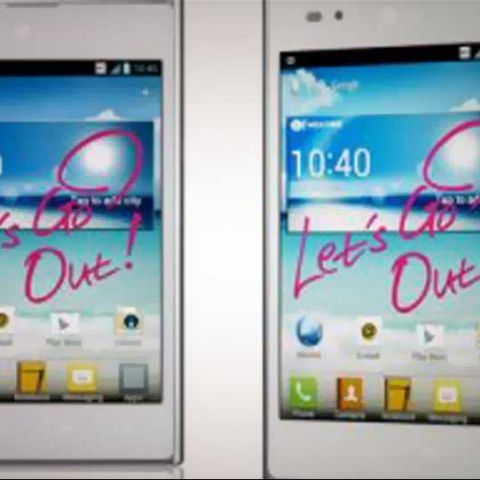 Some say, the LG Optimus Vu was conceived to rival the Samsung Galaxy Note II. However, that is exactly what it is not. Well, you may say that both are big-screen phones, with the rather fancily named styluses, but both seem to offer different things. The Optimus Vu is even bigger than the Note II. The Note II has better S-Pen features and multi-tasking. In the end, it is more about what you want from a huge phone!

The phablets are here to stay, and that is pretty much crystal clear. The Samsung Galaxy Note II still pretty much leads the way in terms of performance and the overall premium feel of the package. But the others are not to be ignored!

It is huge, and that is what you immediately notice the moment you hold it in your hand. The Galaxy Note II has a width of 80.5mm, while the Optimus Vu measures at just more than 90mm. The wide design does make it slightly uncomfortable while you hold the phone against the ear and talk. A Bluetooth should solve the problem. Read LG Optimus Vu versus Samsung Galaxy Note: Hybrid smartphone battle

Apart from that subjective issue of ergonomics, you will be appreciating a fairly good build quality. The test unit that we received was the one with the part enamel and part imprint white coloured finish. On the front is the huge 5-inch display, with a fairly slim bezel on the right and left side. But the top and the bottom areas are fairly thick. Below the display are four touch sensitive keys – return, home, task manager and options.

There is a chrome frame running along the entire length and width of the phone. On the top are the power key and a button that opens the Memo mode when pressed. The micro USB port has a classy touch with a slide cover. On the right spine is the volume rocker. The right and left spines have a profound outward bulge throughout. Flip the Optimus Vu over, and the rear panel has the same white finish but in a matte touch with an imprint design.

The Rubbebdium pen does not fit anywhere on the phone, like the S-Pen on the Galaxy Note. And that is a bit confusing, because expecting the users to carry another accessory is only lining up for a disaster.

The LG Optimus Vu is a rather unique device. The display has a pure 4:3 aspect ratio, and that makes the entire package considerably wider than the Galaxy Note II. This despite the fact that the Note II has a 5.5-inch display while the Optimus Vu has a 5-inch display. We don’t really see the purpose of a 4.3 aspect ratio display on a phablet, considering that most of the media the users will play back will be widescreen or pure 16:9 aspect ratio.

Another issue is the lesser pixels on the Optimus Vu’s IPS LCD display than on the Galaxy Note II’s Super AMOLED. There are quite a few positives though - no shortage of sharpness though, and text readability is rather good. Colour vividness offered by this HD-IPS LCD is quite acceptable, but the Note II’s Super AMOLED undoubtedly offers richer colours.

There is 32GB on-board memory, but no card slot. However, we feel that should not be a problem considering you would surely also have a couple of cloud storage accounts linked with the device.

The 8MP camera is quite good overall – be it daytime or be it in low light conditions. Shots in the day are very balanced – good colour, detailing and sharpness to the overall picture. Night shots lose out a bit on sharpness, but colour remains surprisingly lifelike thanks to fairly good contrast ratios. Videos are slightly on the noisier side in low lighting conditions.

The Galaxy Note II is consistently faster than the Optimus Vu in the benchmark tests. That being said, the performance of the Optimus Vu is still quite acceptable. The experience and the speed of the overall package is pretty similar to what you would see on the likes of the LG Optimus 4X HD and the HTC One X, but that is not close to the blazing performance of the Note II. What really helps is the UI, which is surprisingly fast, smooth motion and fairly uncluttered.

The Vu has a 2100mAh battery, which is straightaway 1000 mAh lesser than the Note II. Expect a day of backup with ease, but stretching that more would be a problem.

Call quality is very good, but holding this device up to the ear is not comfortable. You would be better off using a Bluetooth headset for voice calls.

The stylus is the standard one that works on capacitive touchscreens, and is surely a step behind the Galaxy Note II’s S-Pen in terms of precision. Plus, LG’s arrays of apps for the stylus are neither as vivid nor as fun as the ones Samsung pre-loads on the Note II.

In the phablet segment, the LG Optimus Vu is fighting what seems to be a losing battle. Not because of any fault of the device, but because of the wrong pricing. At the moment, it is priced too close to the Galaxy Note II, and that is surely not the best way of going about it. The consumers will end up considering the Samsung phablet most of the time. We surely hope that better sense will prevail, and the price for the Optimus Vu will be tweaked. At just under Rs 30000, this would be a very unique device for most buyers.