The Intex Q11 is a sub-par smartphone in all respects. It fails in terms of performance, camera and almost everything else. We would recommend spending a little more, to buy the Xiaomi Redmi 3s.

Smartphone makers have been relentlessly innovating in the budget segments. Unfortunately, the innovations we’ve seen in the sub-20K or sub-15k segments haven’t yet trickled down to phones that cost even lesser. To be precise, most sub 7K smartphones still feature 2-year-old hardware and negligible performance boosts compared to last generations. So, when the Intex Q11 4G was dropped off at my desk, I was a tad unsure about how it would fare. Frankly speaking, the phone doesn’t seem very competent on paper. 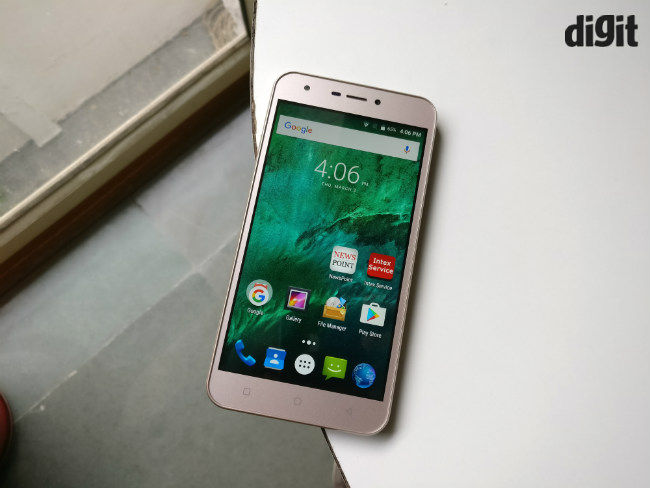 Interestingly, its main feature is the VR capabilities built into it. But, we’ll get to that later. For now, let’s begin with the look and feel.

Build and Design
The design and build quality of the Intex Q11 4G is pedestrian. The glossy back on the phone feels odd and somewhat cheap. It also looks low-end, but seems sturdy enough, considering the price. There’s a certain heft to it and even though the surface looks fragile, it’s not easily scratched, and can withstand an occasional knock or two. Intex does provide an additional clear-case and screen protector in the box, but I believe there’s definitely room for improvement. 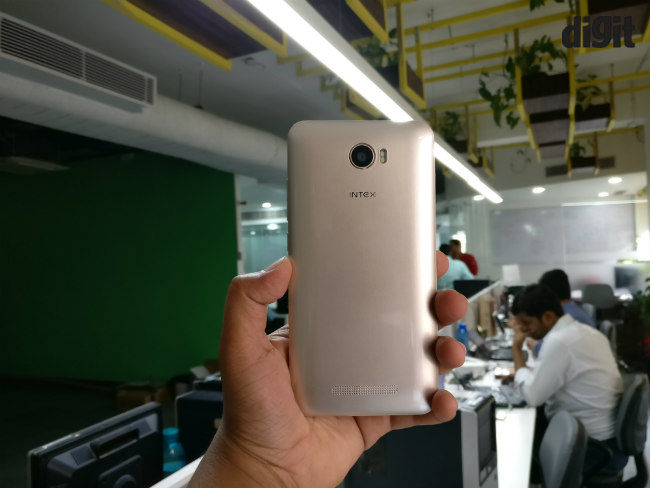 Beside the two physical power and volume rocker keys, there is a silent toggle on the left side of the phone. All three physical keys work as intended, but they don’t respond at times. Also, the buttons feel shallow, as they would if the phone was inside a case. 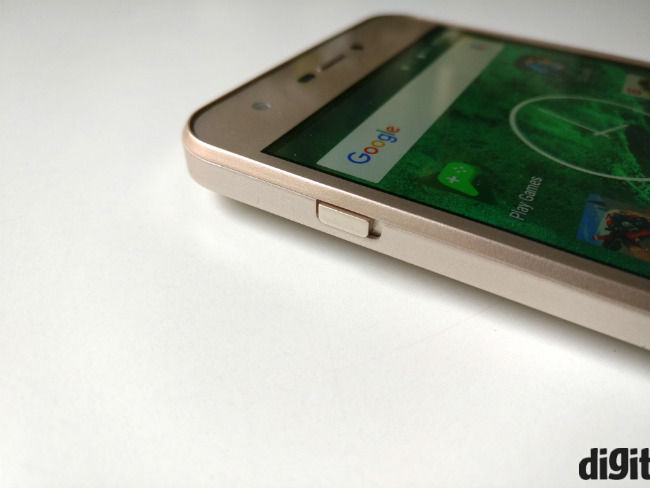 Also, the phone looks like a carbon copy of the Intex 5.5VR smartphone, which was launched a few months back. The two devices share features as well.

Display and UI
Even the displays on the two devices are the same. The 5.5-inch screen on the phone seems quite good, considering the price. Touch response is wonky, though, it’s more like a hit and miss at times. It works sometimes and at others, takes more than a single tap.

Slow performance makes the sub-par touch performance feel worse, which I shall explain in the performance section. The colour reproduction is quite good, but again, viewing angles are just about average. Sunlight visibility isn't great either and there is a visible colour shift from not so wide angles. 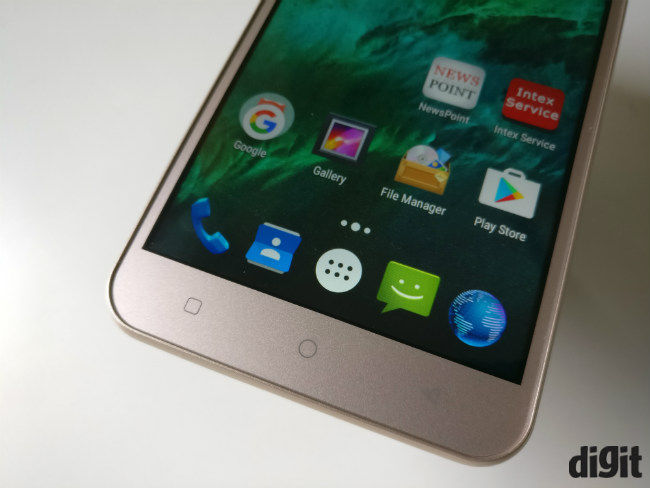 The UI remains the same as well. It bears a stock like facade, which is then integrated into an advert-ridden ecosystem. There are almost a dozen pre-loaded apps, most of which can't be uninstalled. The camera app has shortcuts to a shopping app and editing app. Intex’s own app aggregator will also keep popping up on the device’s notification panel and can be dismissed only after you open it and install a few apps. If you don’t want to, you just have to live with it. 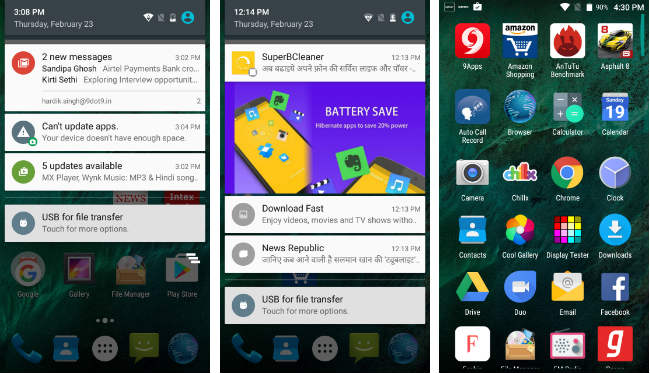 The leftmost homescreen include some weather and current news info from partner apps. While some may like this, and it works as intended, all this together makes it seem like the phone is made primarily to sell apps, rather than providing a good experience.

Performance
The performance of the phone was quite disappointing too. Firstly, there isn’t enough space on, with only 8GB of internal storage. With less than 4GB available to the user, the phone refused to install my regular set of test applications. Further, thanks to Intex’s app aggregator, I ended up installing more unwanted apps, which I then uninstalled.

Interestingly, the phone does not handle apps well either. It lags in simple navigation tasks, like opening recent tabs. This is partly due to the fact that it has only 1GB of RAM and partly because the UI lacks optimisation. It became quite apparent, as simpler games, such as 32 Secs hung a couple of times, when it was the only active task. While the phone does manage to run apps such Facebook, Gmail and Chrome, the experience here is sluggish.

VR is supposed to be a redeeming feature here, and while it does run, it’s not flawless. You can play 360 degree videos via YouTube or watch a pre-loaded videos, but that’s pretty much it. The gyroscope often loses alignment and there isn't much space to install VR games either. Here are some synthetic benchmarks, which do not truly justify the phone’s performance in day-to-day performance. 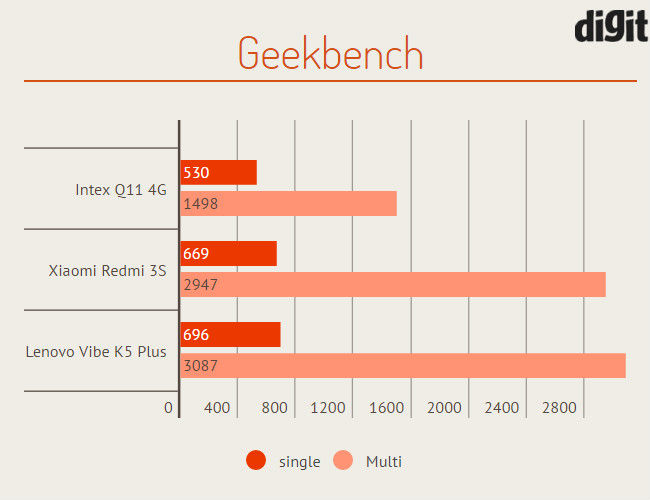 Given its performance otherwise, it’s confounding why Intex wants to sell it on VR capabilities. While lower tier markets may not be privy to things like the Samsung Gear VR (which are not perfect either), this is not the first taste of VR that you should get.

Battery
The PC Mark battery test returns 7 hours and 23 minutes of battery life, which is the industry average today. Using the phone as a daily driver with a Jio SIM, it made it through a normal work-day with over half a dozen calls, about an hour of video streaming, and heavy Facebook and browser usage.

I didn't game much on the device, though, due to unplayable frame rates. Looking past that, there was a drop of 18% in an hour of gaming, with Breakneck.

At one time, while testing the device, it was showing wrong info about the remaining battery percentage. The battery percentage dropped from 30% to 14% suddenly, and then went back up to 35% in the span of less than a minute. This could be an UI issue, or may even be a sign of larger problems. Regardless, it’s not something you want on a phone you just bought. 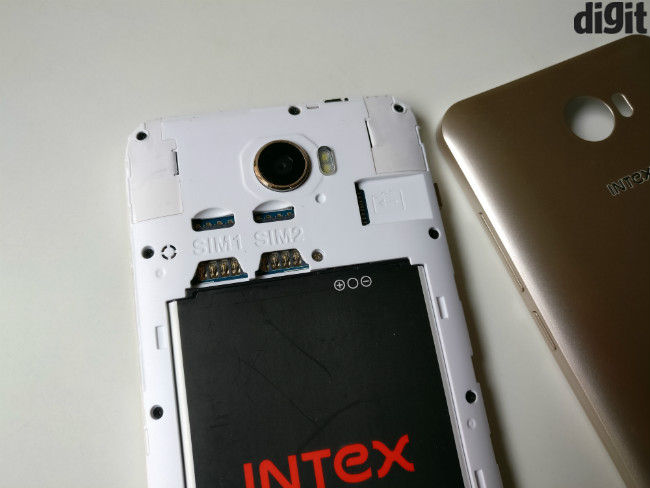 Once discharged, the 2800mAh removable battery takes about 4-5 hours to charge back, which is inconvenient.

Camera
The 8MP rear shooter is again sub-par. Images taken during daytime are dull, lack details and have softer focus, which ruins image all together. Colour reproduction is way off the mark and dynamic range is poor. This also means the camera is unable to process different shades of the same colour properly. As a result, objects lose appeal and pictures lose composure. Image quality further deteriorates as you move indoors and under low light. Under fluorescent light, images appear hazy, with softer focus. Photos are underscored by low details and visible noise. Low light images are almost unusable.

Bottomline
The Intex Q11 4G is a sub-par phone, despite its low price. Its performance is inadequate, the UI is irritating, the camera is unsatisfactory and build quality and design are pedestrian. It’s VR elements aren’t flawless either. I would suggest you raise your budget to about 7K and get the Xiaomi Redmi 3S, which is a much better phone than this.