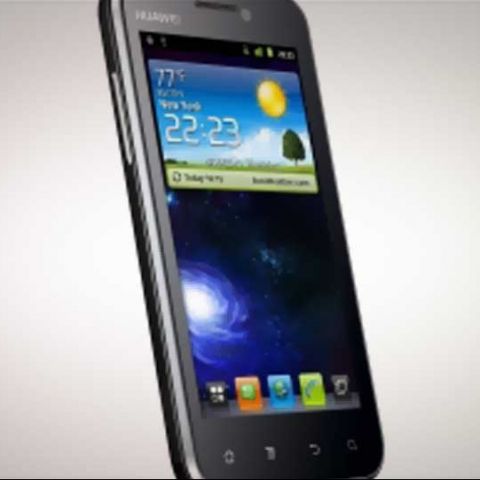 On paper, this has a very capable hardware package. However, the price tag brings it in the same ring against the likes of the HTC One V. Both phones have their tussle on the specs, but the clear disadvantage for the Honour is that it comes with Android 2.3. A promised Android ICS update is only as good it not being here at the moment! You can consider a lot more options around this price bracket - slightly higher and slightly lower. But if this is the way Huawei is going, expect some real rocking phones from them this year.

Quite frankly, we weren’t very excited about reviewing what we expected would be another plasticky smartphone from Huawei, that was halfway where it was actually supposed to be.

However, we would be the first to admit that perceptions were turned on the head by the Honor.

Look & Feel
Lying on the desk, it looks like a typical mid-range Android smartphone. For example, you can have this and the LG Optimus Black (read our review) sitting next to each other, bit you won’t realize which is which unless looked at closely. The 4.0-inch display on the Huawei Honor has a thin bezel around it. Below the display are four touch sensitive keys - options, home, return and search. The left spine has the volume rocker, while the opposite spine is completely clean. Top is where you find the power key and the 3.5mm jack.

Flip the phone over and you see completely different scenery here. The battery cover has a matte finish with a textured finish. Opening this still requires precision with the nails, which does make it feel cheap.

Overall, the phone feels its price - plastic body with a decent enough build quality. Nothing more and nothing less.

Features & Performance
Powering the Honor is the 1.54GHz single core processor, with 512MB of RAM. The performance is adequate, and there will be no stutter or hiccups as you go along. While we cant expect a single-core processor to offer performance equal to more expensive phone, we were surprised at some of the results. Here is a table of how the Honor stacked up against some popular smartphones as far as the benchmark scores are concerned.

The fact that it stands up to the likes of the Xperia S and the Sensation with impressive benchmark scores just proves how adequate and stable this power package is, in a phone that is considerably less expensive than the ones we compared it with.

The 4-inch display has a basic resolution of 480x854 pixels, and that clearly shows when you use it over time. The colour vividness is definitely lacking, and could have done with a bit more depth as far as black levels are concerned. However, the text on the display is very crisp, which helps with reading. This display isn't meant for multimedia consumption other than the once in a while kind, but even HD videos played back very well - no stutters even when skipping along the playing time.

The launcher on the Huawei phone does have a unique taste to it. Particularly visible on the lock screen where you have four shortcuts, and either you unlock the phone, or head straight to calls, messages or camera. You cant add your own apps to this, something we expect could come with a future version. Nothing really stands out in this package - standard widgets, colourful backgrounds and multiple screens to spread them across.

When we had checked out the Cloud Drive in an earlier phone, it was still in the Beta version. Now it is out of that stage. Offers 16GB online storage space, post a one-time registration process. The phone has a microSD slot, and the additional cloud storage should be an incremental boost to whatever storage you have on the phone. But will surely not be a decision swing factor.

With an 8MP clicker doing 720p videos, the Honor’s impressive run on the spec sheet continues! However, this one will do decently well if the ambient lighting is good. There is a lot of shutter lag when taking shots in low light or at night. However, the images either have considerable smearing probably due to the processing that is adamant on reducing edge noise, or have a generous amount of motion blur in low lighting. Videos are okay for viewing on the phone, but there aren’t many settings that you can tweak. All in all, a basic smartphone camera that should ideally be used every once in a while, only when really needed.

Decent battery life from this device, with about a day and a half of backup time under normal usage conditions, usually medium-heavy usage with calls, IM, YouTube and a bit of web browsing. The generous 1930mAh battery does help quite a bit in keeping this phone alive.

Our Take
What the Huawei competes against are a bunch of very competent smartphones - HTC One V, Samsung Galaxy S Plus in the same price bracket, and the Nexus S if you are willing to spend a bit more. Essentially, we believe that the Honour is an indicator of what Huawei is planning for this year. We are impressed, but expect a bit more quality and up-market feel in the overall package. And yes, the latest Android version out of the box!