Of all the strategies that HTC could have employed to get back on top, targeting users who want high-end dual SIM smartphones seems like a strange one. But nevertheless, here we are at a stage where the only high-end smartphones (read: Rs. 30,000 and above) in the market are from HTC. The Desire 700 dual SIM is the latest from the Taiwanese phone maker and joins the much more expensive HTC One dual to target that niche audience.

Let’s see how it stands on its own, shall we?

There’s really nothing special about the hardware inside the Desire 700. In fact, there are plenty of phones today that cost almost a third of the Desire 700 yet offer more powerful specs. While the quality/premium argument can be thrown up here, the Desire 700 isn’t premium enough to command almost 300% more money than phones that are more powerful.

The Desire 700 runs on a 1.2GHz quad-core processor with 1GB RAM and 8GB of internal storage. Unfortunately, only about 4GB of that is user accessible, so you’ll have to quickly start relying on microSD cards. The Desire 700 also has a 5-inch display but again, it’s limited to a resolution of 960x540 pixels- a number that really doesn’t suit a phone that costs as much as this.

To get a better understanding of the Desire 700’s specs and compare it against competing phones such as the Desire 601, Galaxy S4 Mini and the XOLO Q3000, check out our comparison table.

There’s no denying the fact that, at least on paper, the Desire 700 appears underpowered especially for the price it commands. But then again, as we’ve seen over and over again, specs hardly ever tell the complete story, do they?

The bad news is that the Desire 700, like other HTC phones, chooses to forgo the simple, basic Android UI and opts for HTC’s own Sense UI (version 5.0 here) that employs snazzy animations and changes the way the Android interface works. The good news is that in the world of custom Android UIs, you could do much worse than Sense UI. As always, Sense UI looks good and has embraced minimalism that the likes of LG and Samsung would do good to follow.

Sense UI does employ plenty of animations and effects and as a result, the interface never truly feels smooth. There is a slight feel of lag as you swipe between screens, something that’s pervasive throughout the interface. However, it never rises up to become an issue that critically damages the user experience.

The Desire 700 currently runs on Android 4.1.2, which is strange considering that the lower priced Desire 601 comes with Android 4.2.2. Hopefully, HTC will release an update soon although there’s been no word about it so far.

Like the newer breed of HTC phones, the Desire 700 also comes with BlinkFeed, the news aggregation tool that occupies one of the homescreens. Fortunately, if you aren’t a fan, you can set it to a secondary homescreen so that it doesn’t appear every time you unlock the phone. The phone also comes preinstalled with Polaris Office that lets you create and work with Word docs, Excel sheets and PowerPoint presentations. There’s also a ‘Kid Mode’ (powered by Zoodles) that you can turn on if your kids have a habit of playing with your phone. In this mode, you can set a password to lock them out of a majority of features and let them play around with apps that you’ve specially downloaded for them. Scribble is another pre-installed app in which you can make notes in various templates either by typing or writing with your finger. If you own an HTC Media Link device and have it connected to your TV, you can also easily view media files on the larger display.

HTC has packed the Desire 700 with a decent number of preinstalled applications without going overboard. Of course, chances are you’d still want to install the apps you’re comfortable with directly from the Play Store.

If there’s one thing that HTC has learnt to do well, it’s building a good looking phone. The Desire 700 may not fall on the bleeding edge of chic but it’s still a stylish device. The two speaker grills on the phone’s face (one at the top and one near the bottom) with a green tint add a visual twist to the otherwise black glass look. The back of the phone is made up of smooth black rubberised material and here again, the round camera module is highlighted by a green ring around it. The top edge of the phone has the power button and the headphones jack while the bottom edge has the mic pinhole and microUSB port. The left edge is empty and the right edge only has the volume bar.

The HTC Desire 700’s 5-inch display looks good and is somewhat able to hide the fact that it has a resolution of only 960x540 pixels. The low resolution does make its presence obvious when you’re looking at images or watching a movie and I have to wonder (again), why the heck would HTC ask this much for a phone when the specs clearly belong on a phone that could have been priced much lower? Anyway, the display is not too glossy but you will need to ramp up the brightness under sunlight.

Overall, the Desire 700 is a good looking phone with no issues when it comes to build quality. However, despite giving its best, the low resolution display is a disappointment.

Often we tell you to not look at the benchmark numbers posted by a phone since they are hardly indicative of real world performance. That’s quite true in the case of the Desire 700, because I had no real issues with the phone’s performance in the week or so I used it. However, inspite of how seriously you choose to ignore benchmark performance, at some point in time, you have to look at the hard numbers.

I’m not exaggerating when I say that I’ve not come across more pathetic numbers than what I got from the Desire 700, especially held in context of how much it costs. The numbers posted by the Desire were so low that I reset the phone thinking that it had to be some kind of error. Running the benchmarks again did not give me any different results and I gave up at that point of time.

To get a glance at how poorly the Desire 700 performed in benchmarks, check out the graphs below: 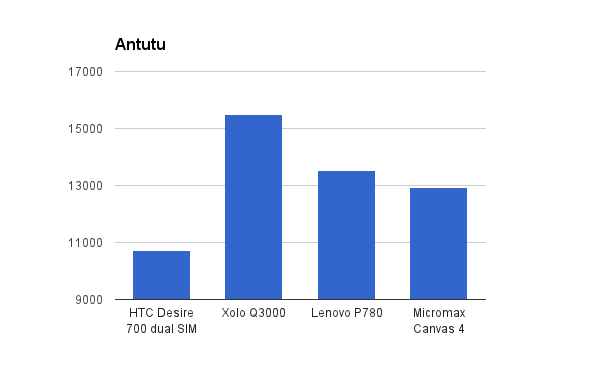 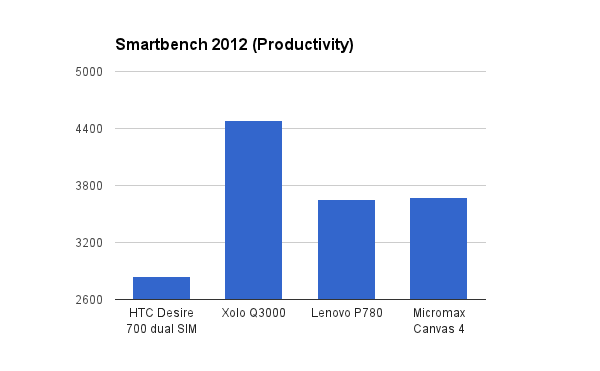 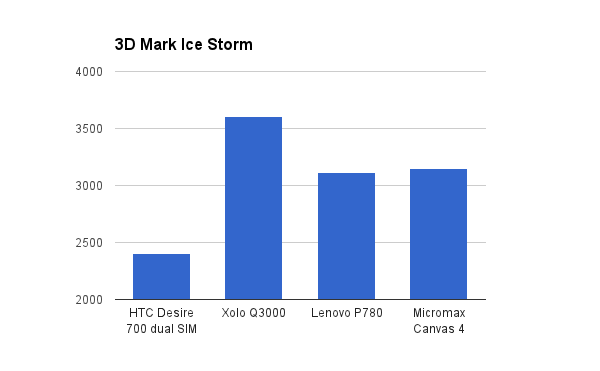 Again, I must stress that the real world performance of the Desire 700 is quite good. It’s just that it’s difficult to ignore how badly it performed in benchmarks.

Moving on, the phone offers decent battery life. It lasted for slightly under four and a half hours when playing an HD video with the screen at full brightness and Wi-Fi on. This means that the phone will last you most of the day (of regular use) but will most likely require a charge in the night.

I’ve mentioned earlier that the interface feels a little sluggish. This is the same case when it comes to browsing too, but it never becomes too serious a problem. I downloaded Angry Birds Star Wars 2, Dead Trigger 2 and Asphalt 8: Airborne to check out the Desire’s gaming prowess and wasn’t disappointed. Apart from moments of low frame rates in Dead Trigger 2 and Asphalt, all games ran pretty well. The phone does, however, get really warm, really quickly when gaming.

The presence of the stereo speakers means that the Desire 700 is very good at playing music. The speakers are very loud and clear and so is music playback through earphones. The custom (default) music player app does a good job of looking good and being easy to use. However, the phone does not offer EQ options (at least none that I could find). Video playback is also quite good thanks to the relatively large screen. Despite decent colour levels, the sharpness takes a hit due to the low resolution.

Finally, the Desire 700 offers active dual-SIM support, so you can get a call on the second number even when you’re in-call on the first SIM.

The Desire 700’s imaging software tends to be over aggressive in cutting down noise and ends up killing most details in the photos shot with its 8MP camera. Photos shot in daylight and normal indoor light look like paintings, since the aggressive algorithm kills any surface texture, making everything looking like paint brush smudges. This effect gets worse in low light and despite relatively low levels of noise, the photos turn out poor. You also get to play around with the Zoe feature that captures a couple of photos and a short video of any subject automatically. You can choose one particular frame from the ones recorded or just use the entire thing as a short video.

Video recording is much better and the 1080p videos shot by the Desire 700 look crisp and have decent frame-rates. I also had no issues with the audio captured in the videos.

I could beat around the bush and say that the Desire 700 will suit this or that type of user, if they’re specifically looking for this or that. But really, why should I waste your time? There’s simply no way I can recommend the Desire 700 to anyone, at least not when it costs anything north of Rs. 20,000. You’ll find much better deals on dual-SIM phones under Rs. 20,000 like the XOLO Q3000, the Sony Xperia C and the Lenovo IdeaPhone S920.

The Desire 700 epitomizes all that’s wrong with HTC today. Despite floundering in the market, the once great Taiwanese manufacturer, continues to make highly suspect decisions like the Desire 700. The One showed us that HTC is still capable of making excellent devices. It’s just a shame to see the company waste its potential.