Gionee A1 Plus Review: Bigger, not better 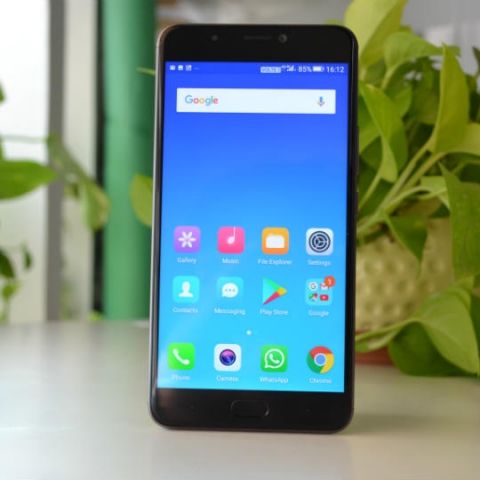 The Gionee A1 plus is just another average device that is unable to justify its price. Its performance is sluggish, ergonomics are compromised and the UI has some issues. For a budget of around 27K, there are much better options available both with or without large screens.

BUY Gionee A1 Plus

Gionee A1 Plus detailed review

It seems like large is the flavour of the month and after Xiaomi took another stab at the category, Gionee wants a piece of the pie as well. However, with a price of Rs 26,999, and a better presence in the offline space, the company is targeting a different audience with the Gionee A1 Plus. The bigger sibling of the almost four month old Gionee A1 features a similar design but larger form factor. You also get a new dual camera setup, which has been a trend recently, and if your phone doesn't have one, then either you don't care about trends or are missing out on them completely. Even Gionee’s own packaging highlights the dual camera setup above all else, as you must have seen during our unboxing of the device. 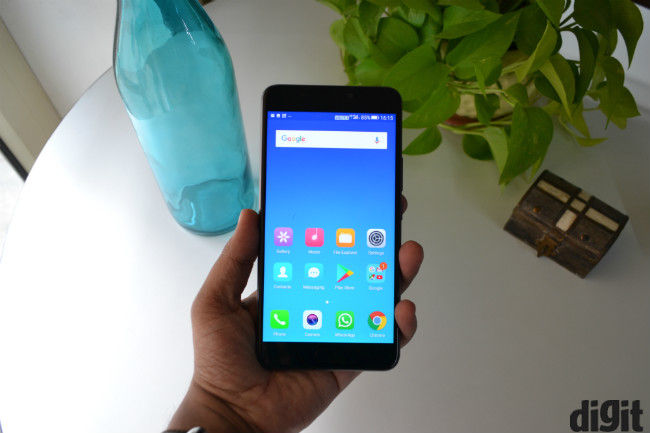 Primary camera
Hence, we are starting with the dual camera setup on the Gionee A1 Plus first. We have a standard dual camera setup with a primary 13MP camera and a secondary 5MP camera. The 13MP camera captures images in RGB and the smaller 5MP captures the same image in monochrome, adding more details to the image. Here, Gionee has employed the same 13MP IMX258 camera sensor from Sony that was used on the A1. Hence, the pictures taken in ample light conditions have good colour reproduction, good dynamic range, almost accurate white balance and most of the details. The soft focusing issue still persists, which means the subjects in many images don't look as sharp as they should. Still, the camera does a good job nonetheless. 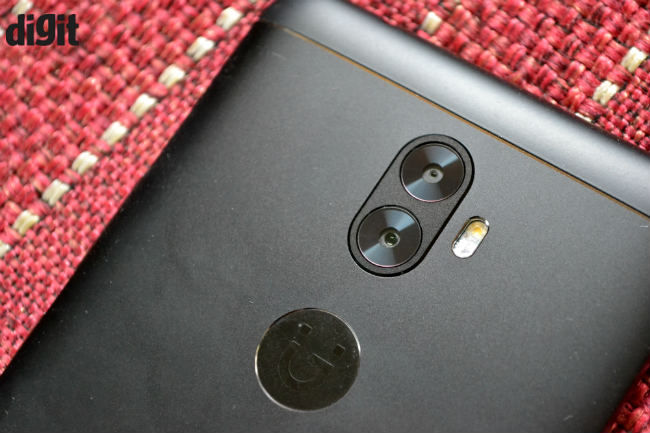 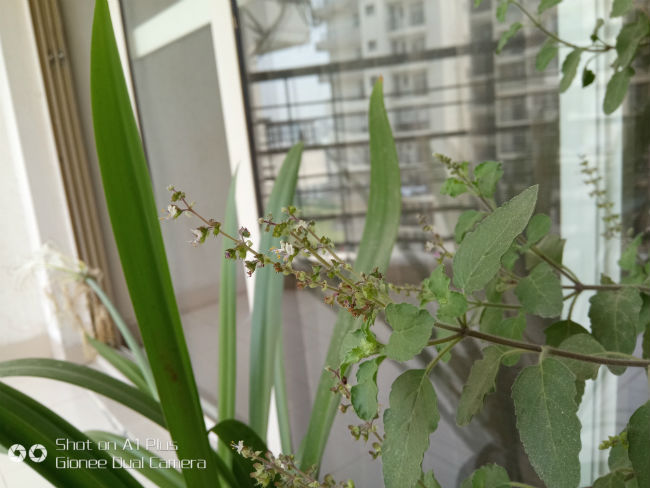 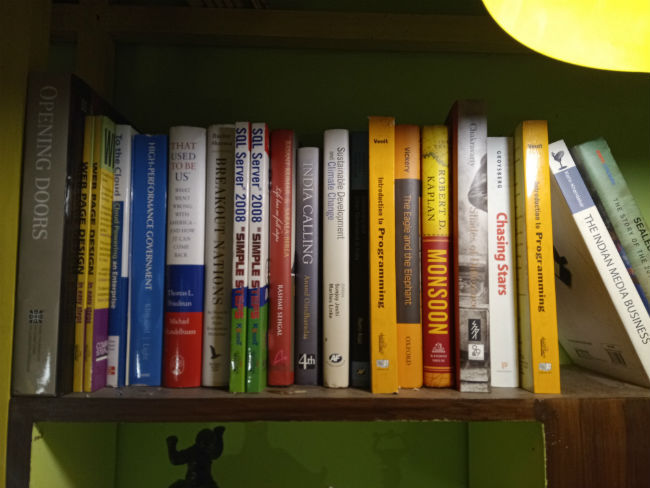 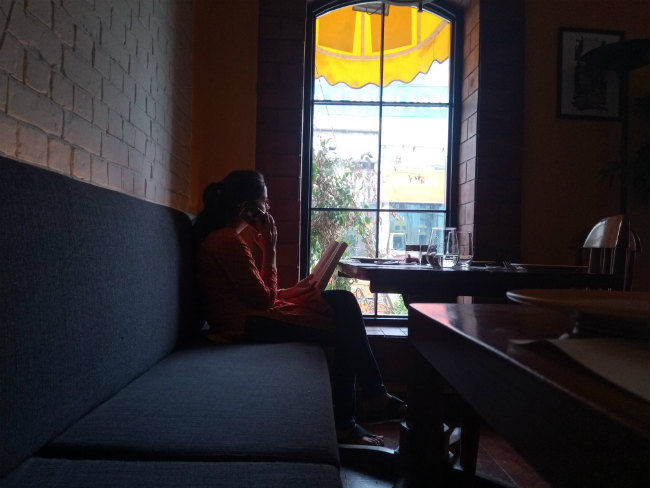 The dual camera setup also enables the phone to take ‘Bokeh’ images. Unlike the OnePlus 5 or the Apple iPhone 7 Plus, you don't get predefined blur around the subject, instead you can select how much blur or ‘tilt-shift effect’ you want by adjusting a slider. It is a neat trick, but the effect doesn't seem very impressive. Moreover, the phone does take some time to capture a portrait image. Image quality deteriorates gradually as you move to low light settings. There is visible coarse noise in shadows and darker areas of low light photos. However, the camera maintains decent details and good colour reproduction. 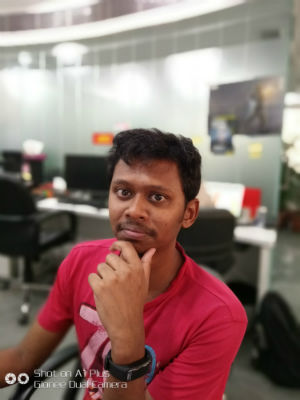 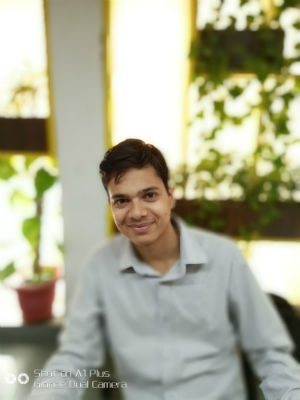 The video performance is also not the best for this price as the phone struggles to capture smooth 1080p, with minor banding issues. You can still get decent video quality by reducing capture quality to 720p. Gionee also misses out in offering 4K video capture even at an asking price of 27K.

Selfie camera
While the rear camera left us wanting, the front facing 20MP camera is quite good and is easily amongst the best in the category. Gionee’s camera algorithm tends to soften photos and that is still prevalent here, but the overall image quality is better than most. The standard set of face beauty modes are also available here and do change the appearance of the subject without altering the face completely. Although, you will look quite funny and alien if you take a picture in the face beauty mode and use the droplet icon (bokeh) mode. 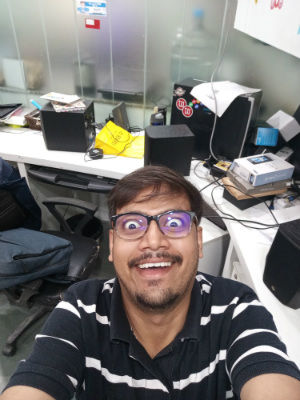 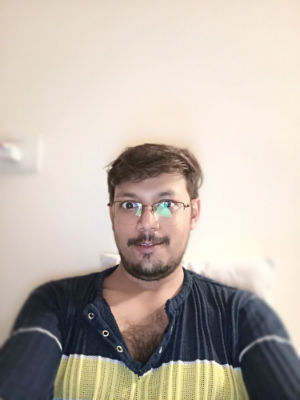 Selfies in dimly lit conditions, like in a restaurant or under a street lamp, remain usable and capture decent details. However, the soft focus issue still remains. In comparison, other selfie centric phones still do a better job. You can check out comparison section below to know more.

Note: To see comparison shots of the Gionee A1 Plus with other selfie phones, see the "How it compares" section at the end of this review.

Performance
While taking images with the Gionee A1 Plus, I observed shutter lag and at times it took quite long to save images. While the camera algorithms have some part to play in this, it was quite certain from the day-to-day performance of the phone, that the processor is also to blame, at least in some capacity. On paper, the MediaTek Helio P25 seems to be a good upgrade to the Helio P10, but that doesn't seem to be the case in real life. I observed regular split-second delays and occasional lags throughout my use. Whether you are shifting between apps or moving between different camera modes, a consistent sluggishness is visible across the board. 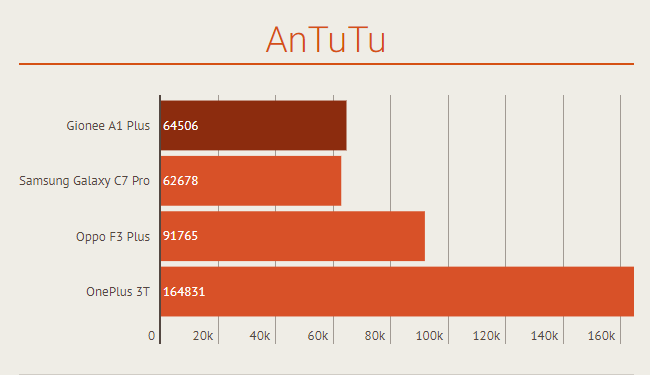 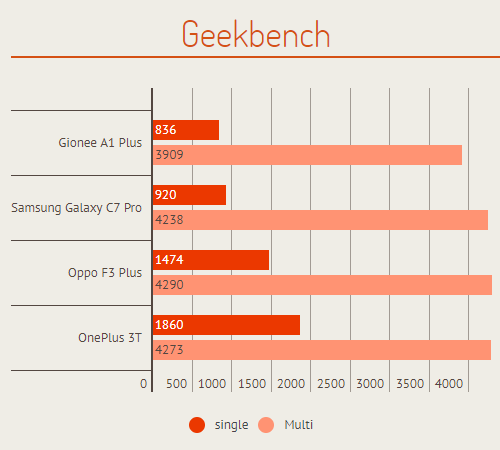 Thankfully, there is no lag or delay once you are inside apps or streaming something on the phone. Gaming on the device is decent, with good graphics and an overall satisfactory performance. However, game load times and occasional in-game lags will make some people reconsider.

Display and UI
The gaming performance is further complimented by the large 6-inch IPS LCD display. While this makes the device rather un-ergonomic, it is well suited for gaming and watching videos. Colour reproduction and viewing angles are top notch and side-by-side comparison reveals that the display looks even better than the smaller A1. Our tests show maximum luminance of around 621 lux, which is better than most devices in its category. Although there are many better than this as well, including the OnePlus 3T. 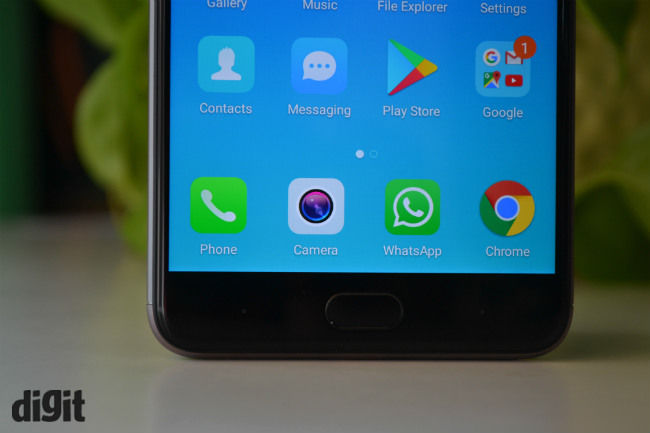 On the UI front, there are no major changes to what we saw on the Gionee A1. So, all apps are laid down on the homescreens, Quick Settings is a swipe up from the bottom and there are lock screen wallpapers, which change every time you unlock the phone. You also have some preloaded software, and theme/wallpaper managers, which you would find on every other Android phone with a custom UI today. 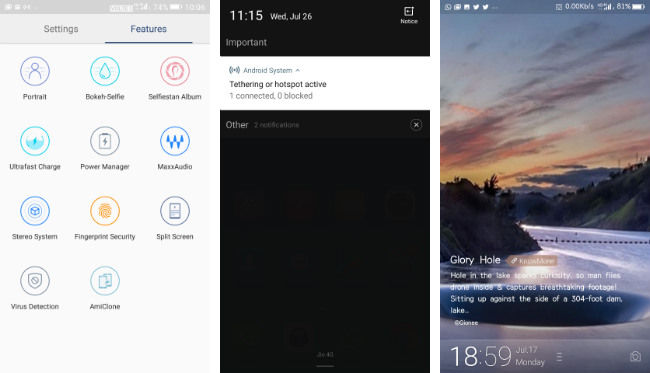 Here Amigo UI is layered on top of Android 7.0 and whether you like the UI or not is totally up to you. However, there are some things which are simply annoying after some time. For example, some notifications are hidden inside the notification shade and you have to tap one more time to access them, or the fact that you can’t disable the lock screen magazine feature. A swipe from the right side on the Settings menu will take you to features. This is more like a demo cum quick launcher menu for all the listed features. Some of the icons will take you to respective apps such as ‘portrait mode’, but then there are icons like ‘Stereo system’, which basically show how the phone is capable of stereo sound output. This “features” menu then seems more like a gimmick rather than of actual use.

Battery life
Anyway, the other big feature, that also makes this phone rather heavy, is the battery. The phone has an the extra large battery, which at 4550 mAh is not as big as the Xiaomi Mi Max 2’s battery but still big enough. The real life performance however is way lower than our expectations. Yes, the battery will last even the heaviest of users more than a day quite easily, but not more than that. In our PCMark Battery test, the phone scored 9 hours and 17 minutes, which isn't very impressive, especially for a battery this size. Although, fast charging (Gionee calls it Ultrafast charging) is good and with the supplied charger one can charge the phone from 0-60% in less than a hour. However, Gionee could have moved to a USB Type-C charger for this phone. 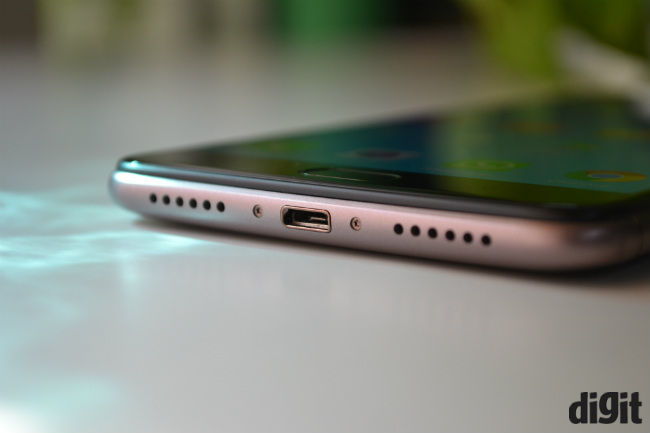 Build and Design
As I mentioned earlier in the review, the Gionee A1 Plus looks similar to the Gionee A1, but in a larger form factor. Hence, there are no cool design features on the phone, except for the bronze inlay on the power button. The slightly curved back is sandblasted, which makes it look premium, but also makes it slippery. The larger screen size and the bulging sides makes the phone unergonomic and almost unusable in one hand. In comparison, phones like the Oppo F3 Plus and Samsung’s Galaxy C7 Pro offer better ergonomics. 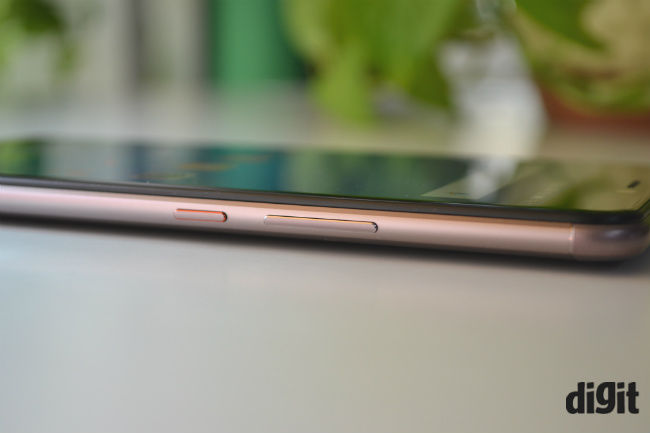 The whole metal back along with the weight make the phone feel sturdy. In addition, the power button and volume rocker offer decent, tactile feedback and are fairly sturdy. The fingerprint scanner on the front is integrated into the physical home button, and can unlock directly from idle. However, it is not very accurate or fast and I often end up punching in the security code instead.

Bottomline
All in all, the Gionee A1 Plus is just an average 6-inch smartphone. The performance is sluggish, battery life isn't great, and it is designed like a budget phone. However, the build quality is quite good, both rear and front cameras are promising and the phone will last even for the heaviest of users a for an entire day. However, if you are paying 27K for a smartphone, you can do get much better. 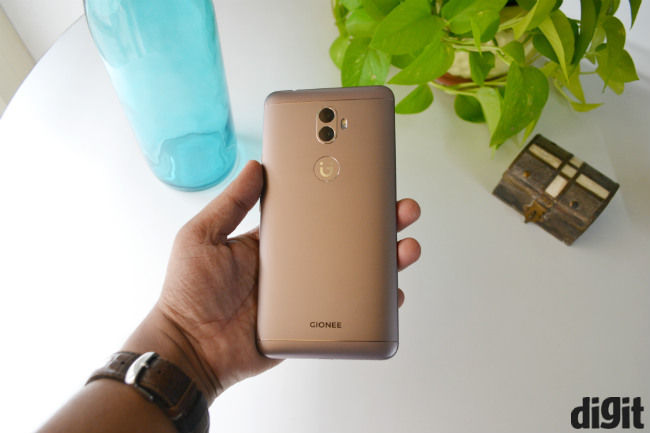 How it compared to its competition
One of the best options in the market for the same price is the Oppo F3 Plus, which is better than the Gionee A1 Plus in all aspects, be it camera, performance or battery life. Selfies especially look inferior compared to the Oppo F3 Plus. While we didn't have a F3 Plus handy, here is indoor selfie compared with the less expensive Oppo F3. 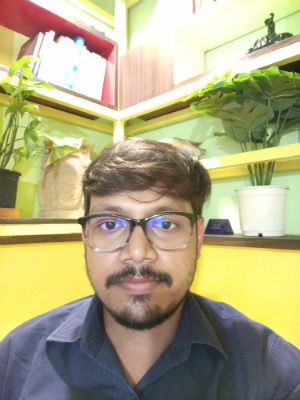 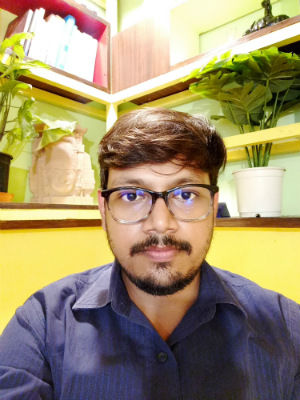 The Oppo F3 is not a direct competitor, but as far as selfies are concerned, it's evident that the F3 is better at this task. The phone captures better details and produces sharper and more vivid photos. In earlier comparisons, we've found the Oppo F3 Plus to pull ahead of the F3, which makes it noticeably better than the A1 Plus as well. We will be comparing the Oppo F3 Plus and Gionee A1 Plus soon.

Other compatitors include the Samsung Galaxy C7 Pro, offering better performance and one of the best displays we have seen on a large screen device. Then, there is the OnePlus 3T, which is a superb phone around the same price, but sans the big battery and large display.

As for the battery life, while a day worth of battery life is actually up to industry standards today, with such a large battery in place, I was expecting more from the phone. Especially, with contenders like Xiaomi Mi Max 2 and Lenovo P2 offering better overall battery life at much lower prices. Maybe we are expecting Marathon M5 level battery life from this phone, since Gionee’s does have a history of providing good battery life.

Gionee A1 Plus Key Specs, Price and Launch Date