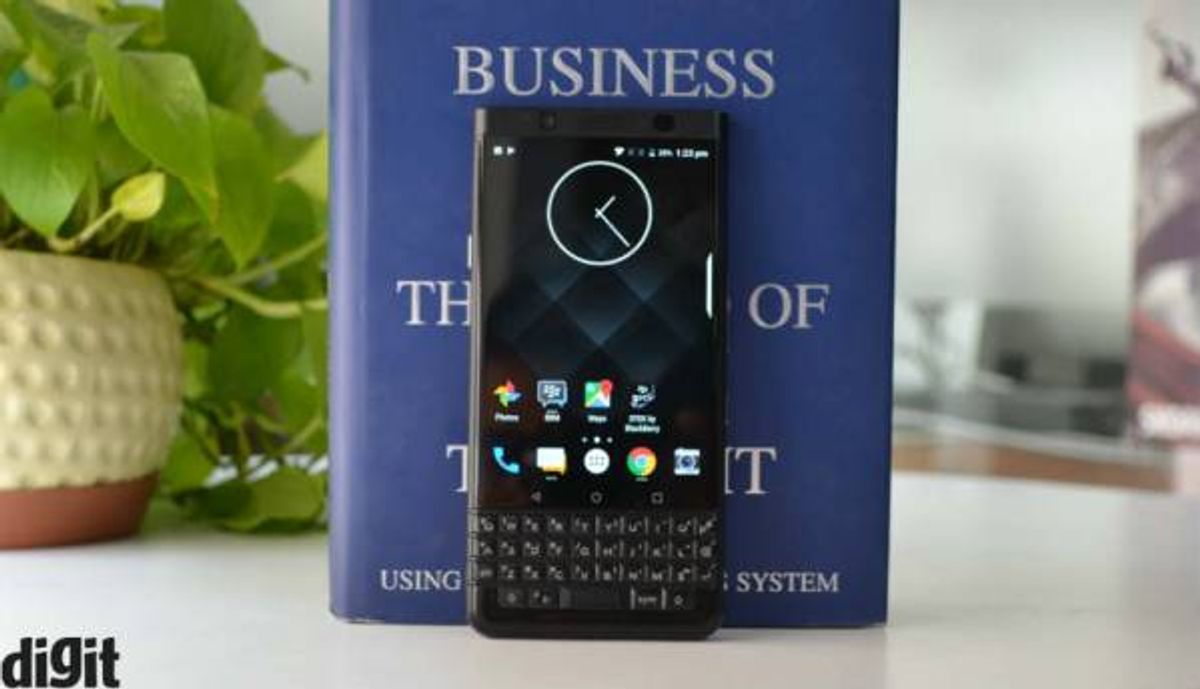 As a standalone device, the BlackBerry KeyOne is a good phone. However, throw competing smartphones into the mix at the same price point and it’s difficult to recommend the KeyOne.

Once upon a time, when smartphones were at a nascent stage, a company known as BlackBerry made smartphones for the businessman. If you owned a BlackBerry you were taken seriously. People wanted to know your BlackBerry Pin, they wondered how you typed so fast on that small keyboard, they couldn't comprehend how you looked stunning all the time. But most of all, people wanted the phone you had. That’s until a little device called the iPhone came and disrupted the market and people migrated from one to the other.

But Blackberry hasn’t left the building. Not yet anyways. The company has tried to innovate with in the past, with devices like the Passport, Priv, DTEK 50 and more. Today we have the latest offering from BlackBerry – the BlackBerry KeyOne Limited Edition Black. The device is priced at Rs 39,990 pitting it against smartphones like the OnePlus 5, iPhone 6S, LG G6 and more. Does it have what it takes to be the talk of the town once again?

One look at the device and you know this is a BlackBerry smartphone. It’s not only the signature keyboard that gives it away, but the no nonsense square design gives off the same vibe as an expensive suit. Needless to say, that the KeyOne is a smart looking device. 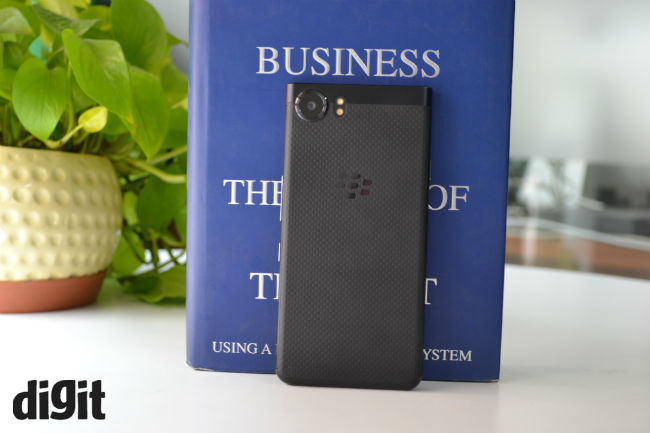 The capacitive home, back and multitasking buttons are placed below the display, right above the keyboard. Above the display we have the front facing camera and the earpiece. The bottom has the USB-C Port, and the mono speaker.

Coming to the back of the device, it has a textured faux leather feel to it, which not only makes it feel premium but also allows better grip. The space bar doubles up as the fingerprint sensor and is very fast and accurate. No complaints here.

A lot of people thought that the BlackBerry Passport was an un-ergonomic device, but if you used that smartphone to type a lot, then its wide form factor made sense. With the keyOne we have a slimmer version of the Passport and that isn’t a bad thing. It’s just that the device can get slightly uncomfortable for long typing sessions. 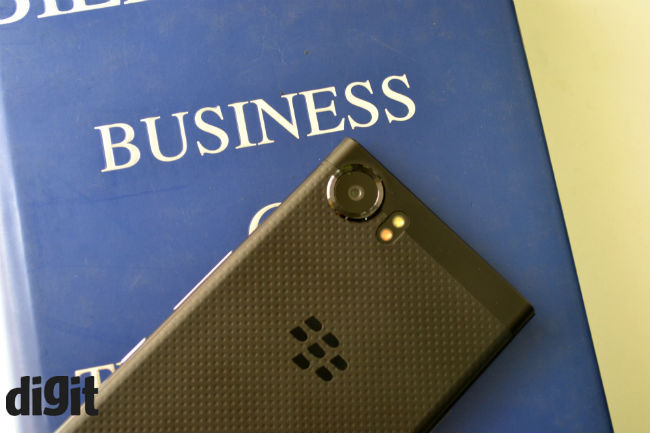 When it comes to the build, the BlackBerry KeyOne is a well-built device. But it isn’t always easy to deal with. Using the device in landscape mode can become a problem because of the keyboard. Also, thanks to the aspect ratio of the device, you will see black bars on the top and bottom, which feels like a waste of display real estate.

Coming to the signature feature of the BlackBerry KeyOne, the keyboard – it is a pleasure to type on once you get used to it. If you are one that has been using a touchscreen keyboard for a long time, then this may take some getting used to. Straight off the bat I can tell you that your typing speed will decrease on this keyboard but your accuracy will increase. The keys are curved slightly at the top, but not as much as previous BlackBerry smartphones (at least I feel this way).

The keyboard has a bunch of nice tricks, some of which we have seen in previous Blackberry devices. To begin with, when you are reading a document or browsing a website, you don’t need to use the touchscreen to scroll. The keyboard doubles up as a touchpad. You can simply swipe to scroll. Speaking of swiping, if you are typing and want to delete a word, just swipe from right to left on the keyboard and the word gets deleted. You can also assign long press and short press shortcuts to the keyboard. This means that you have 52 shortcuts at your disposal from the keyboard. There are more keyboard tricks on the KeyOne and once you get used to them, it can make for a rich typing experience. 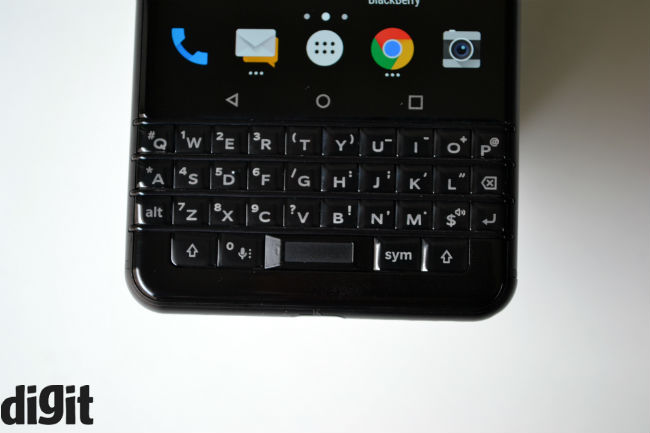 The 4.5-inch display on the Blackberry KeyOne has a 3:2 aspect ratio and a resolution of 1080 x 1620 pixels, giving it a pixel density of 433 ppi. The aspect ratio is fine when you work on documents or browse the web, or do anything in portrait mode. Switch to landscape and videos become a problem thanks to the black bars on either side. Playing racing games like Asphalt 8 also becomes annoying. It doesn’t help that the speaker is located below the keyboard so when you use the keyboard as a grip, you end up muffling the speaker.

The display has a peak luminance of 541 lux, which isn’t the highest in this price bracket, but the display is bright enough for both indoor and outdoor usage. The viewing angles though could have been better. The colours produced on the display are crisp and vibrant and look good. 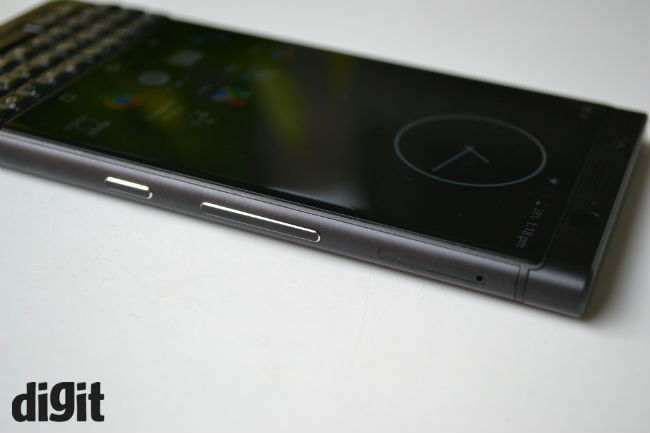 The BlackBerry KeyOne runs on Android 7.1.1 out-of-the-box and BlackBerry promises regular security updates and timely OS updates. If you have used the Blackberry DTEK 50 or 60 in the past, then you should feel at home with the UI. It is mostly stock Android with some BlackBerry tweaks thrown into the mix. Swiping from the edge of the display reveals shortcuts to apps like calendar, mail, contacts and more. The multitasking menu also arranges the apps in a tile format rather than cards, which is found on stock Android. I prefer this tile layout as it gives each app more visibility.

Overall, the Blackberry implementations over and above Android 7.1 work well in a complimentary fashion. 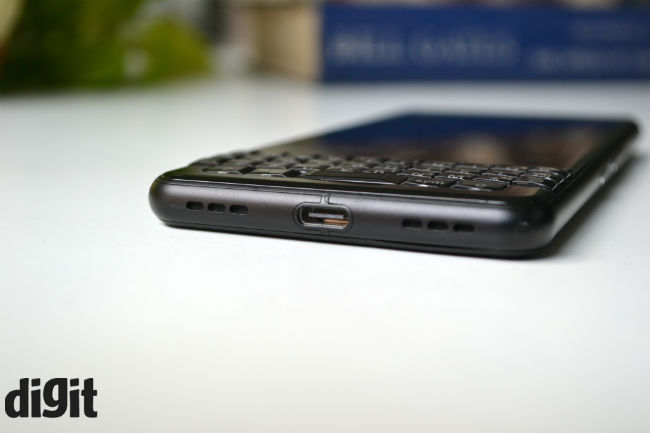 Being a BlackBerry device, the KeyOne boasts of security features but it isn’t something we haven’t seen in the past. DTEK is BlackBerry’s security app and it essentially shows you what app is using what permission in the background and also how secure your device is. So, for example, if you use a flashlight app, it will show you a notification that the flashlight is using the camera app.

Similarly, if you haven’t set a password, pin or fingerprint, or haven’t updated the security of the device then the DTEK app will prompt you about this. If you are a finicky about the security of your smartphone, then this makesa lot of sense.

The rear camera on the BlackBerry KeyOne is a 12MP unit. In daylight, it takes good photos and captures both details and colours. The white balance though wasn’t accurate in some cases. On the plus side, there is a picture where I captured my colleague and behind him was his office PC. Upon enlarging the photo to its full size on my PC monitor, I could make out what he had typed. It wasn’t crystal clear, but the fact that it was legible was good. In well-lit conditions you will be happy with the performance of the camera. In low lit conditions however, the performance of the camera is average at best. The lower the light, the more loss of detail and noise there is. 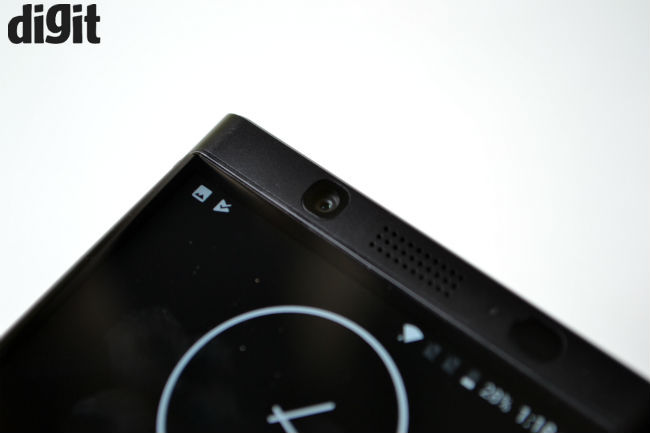 The front facing 8MP camera also clicks decent selfies in daylight although there are better selfie camera smartphones available at the same price.

The camera app is fairly simple too giving users access to photos, Panorama, video and Slow-mo in the mode menu.

Overall, while the BlackBerry KeyOne has a good enough camera, we must say that other phones in this price bracket are better. So, if camera is a priority for you, then you may want to look at other options. Below are some camera samples 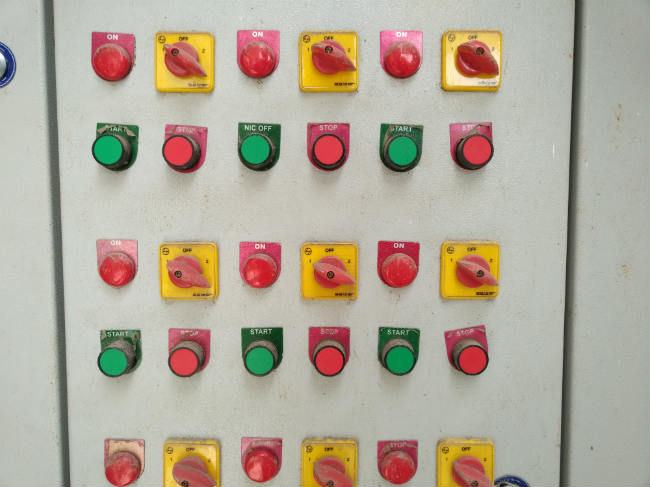 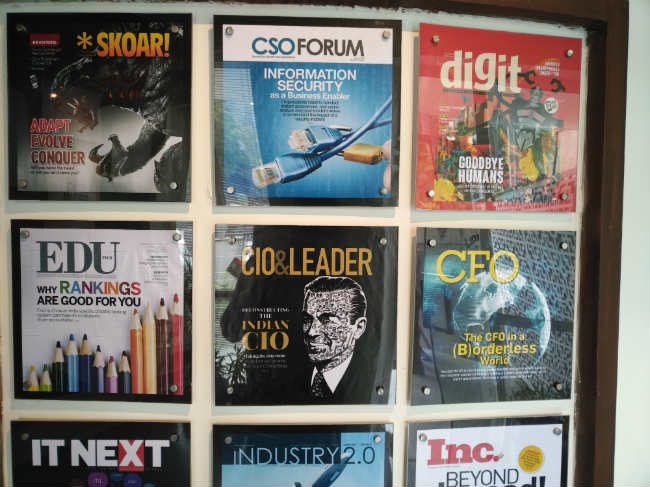 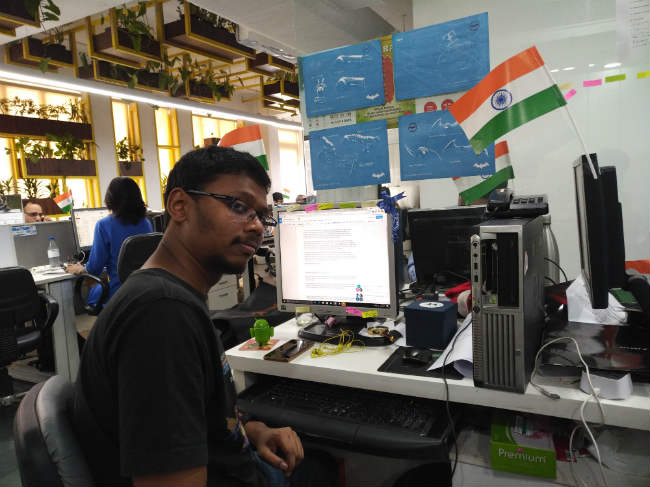 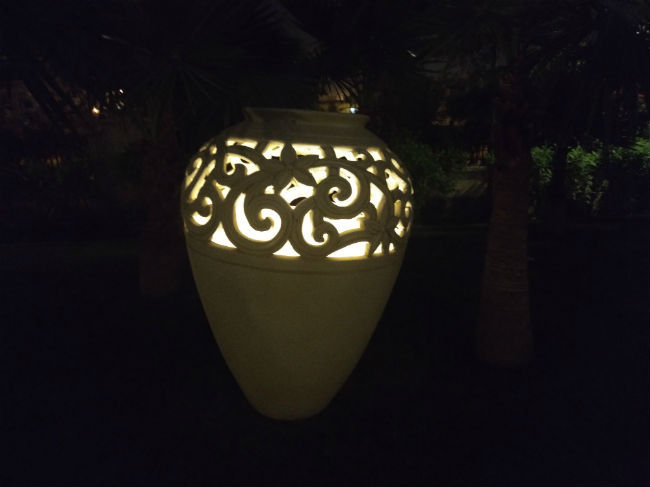 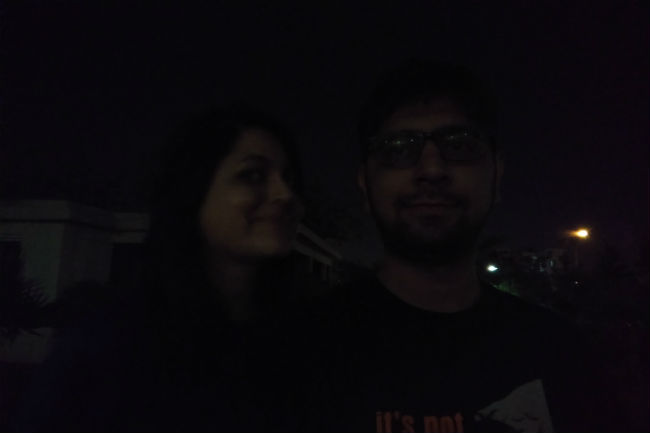 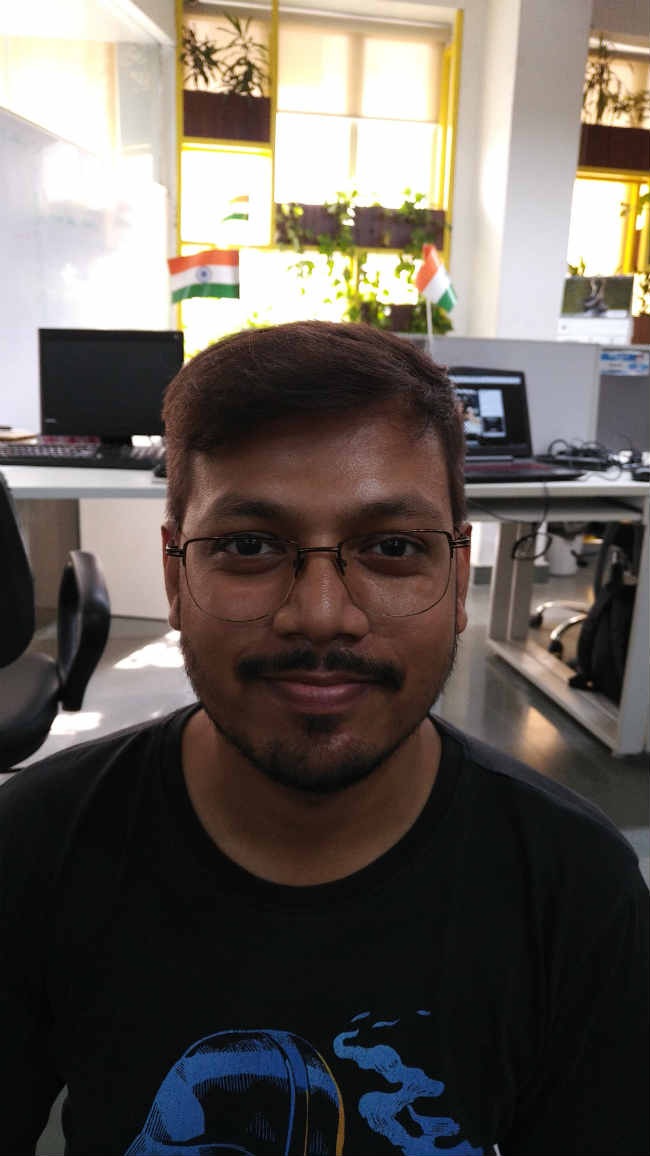 Coming to the everyday performance, the device is smooth for the most part, but there are occasions when you will see it freeze or lag for a bit. This usually happens when you multitask like a monster on the smartphone. But these moments are far and few to complain about. We watched a bunch of videos on it, played some Asphalt 8 and Fastlane, wrote some stories and browsed the web, checked email and spent some time with the BlackBerry Hub too. For all this, the phone worked well.

If you are one that will use the KeyOne as a productivity device, you will be happy with it. For productivity, once you get used to it, the keyboard is a boon. It's when you switch to the entertainment side of things that the keyboard feels like a hindrance. This is one reason why I preferred the design of the Priv. The KeyOne also runs on the Snapdragon 625 platform, which is disappointing at this price point. 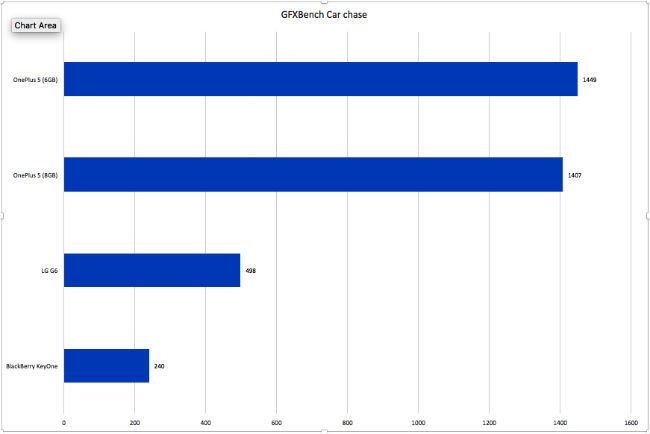 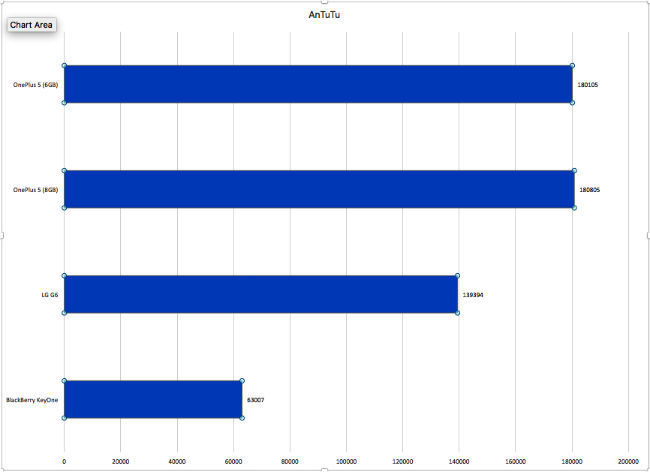 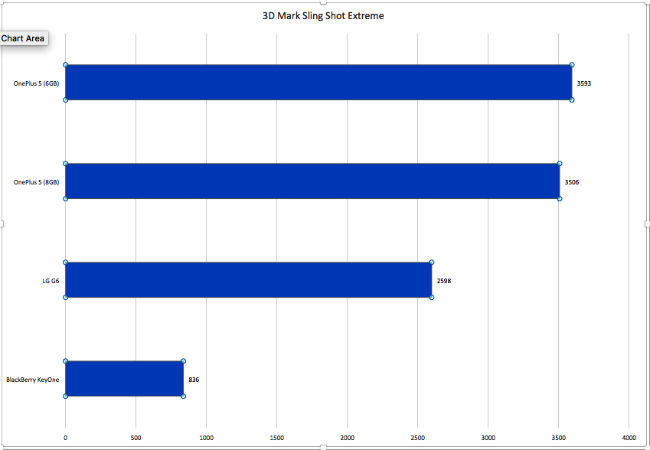 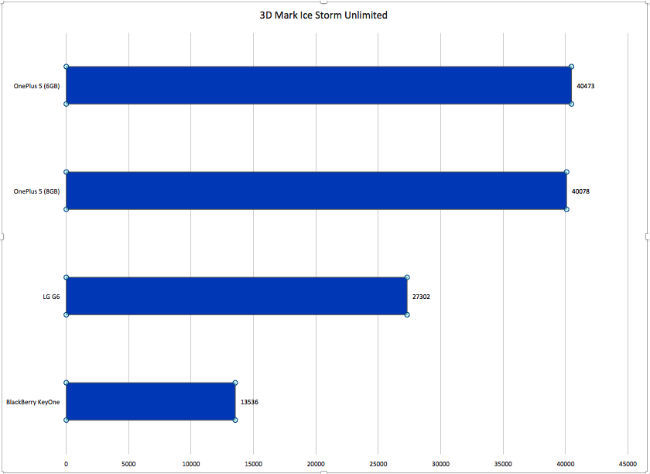 When it comes to battery life, the device lasted for 10 hours and 33 minutes in our PC mark battery test, which is pretty good. It is powered by a 3505mAh battery. In real world use, when we used the device for productivity, some YouTubing and clicking pics, the battery life lasted for a day with ease. But add quite a bit of gaming to the mix and you will need a charger by 6pm.

So, this is the answer to the million dollar question. Can we recommend the BlackBerry KeyOne? Yes, it’s a good device for the most part. Can we recommend it over existing smartphones in the same price bracket? No. You have devices like the LG G6, iPhone 6S and OnePlus 5 at the same price point, and they all offer better hardware under the hood, better cameras and better displays. However, with the KeyOne, Blackberry is looking to attract the audience it once had. It is looking to reignite old love with new features. It's looking to bring back the BlackBerry Boys. With what the phone offers, we think the BlackBerry Boys would have been happy. What remains to be seen is whether they leave their current device to reignite old flames. 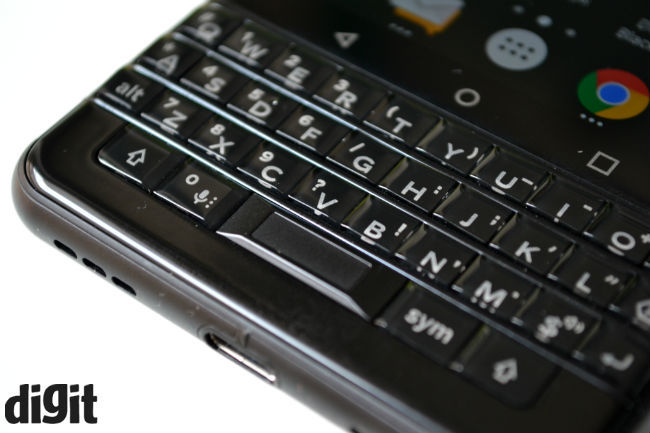 The BlackBerry KeyOne doesn't fare as well as it's competition as far as benchmarks are concerned. So, if you are looking for a smartphone with pure raw performance, then you are better off elsewhere. However, we would like to stare that the KeyOne does perform well for everyday use. It lacks the bells and whistles of a flagship, or the brute power that a Samsung Galaxy S8, OnePlus 5 and other such devices would bring. The camera is good, but flagship class phones are way ahead of this phone here as well. Where it matches competitors is battery life.