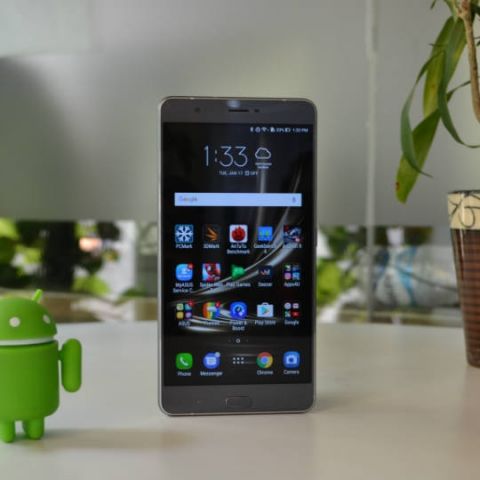 The Asus Zenfone 3 Ultra is a decent smartphone, but it doesn't make sense at Rs. 49,999. The Xiaomi Mi Max is pretty much as fast and a more colourful screen. The Zenfone 3 Ultra does have a better camera, but it still doesn't belong in the premium range.

Asus smartphones in India have followed a simple strategy recently: Go offline and reach more people, even if it means increasing the price. The company’s Zenfone 3 Range has phones in all shapes and sizes, and this, the Asus Zenfone 3 Ultra is the biggest of the lot.

At this size, ergonomics go out the window. The Asus Zenfone 3 Ultra is for those who want the biggest screen possible. However, one may question a few of Asus’ design choices. 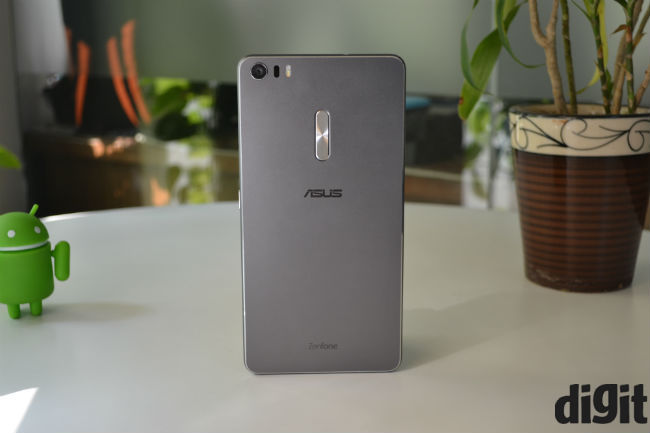 The Asus Zenfone 3 Ultra looks quite nice, with a sandblasted metal finish on the back 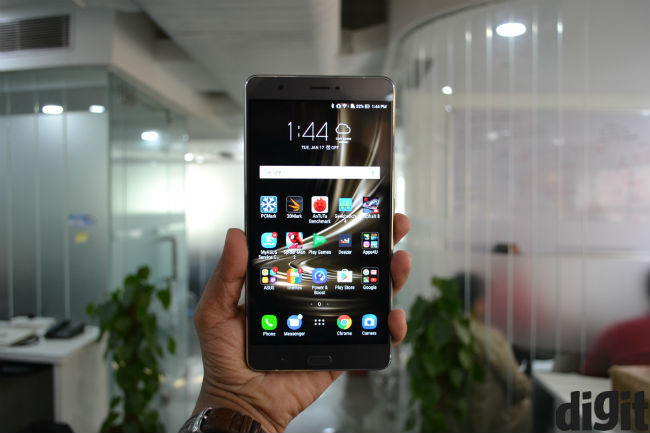 For one, the volume rocker on the back sits flush with the body. The material feels pretty much the same as the metallic back panel, making it hard to identify by touch.

Lastly, and most importantly, the build itself is questionable. While the metal build feels premium, our particular unit came with a minute chip on the bottom, out-of-the-box. Further, the paint seems to be wearing off on the back and recents buttons. 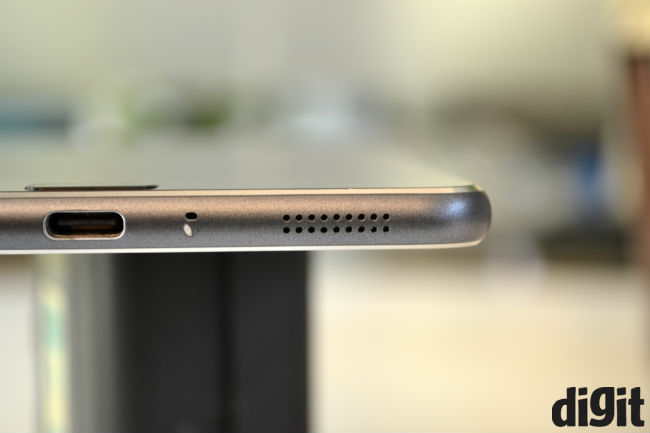 Our review unit came with a noticeable chip near the microphone at the bottom, and the paint on the capacitive buttons was worn off 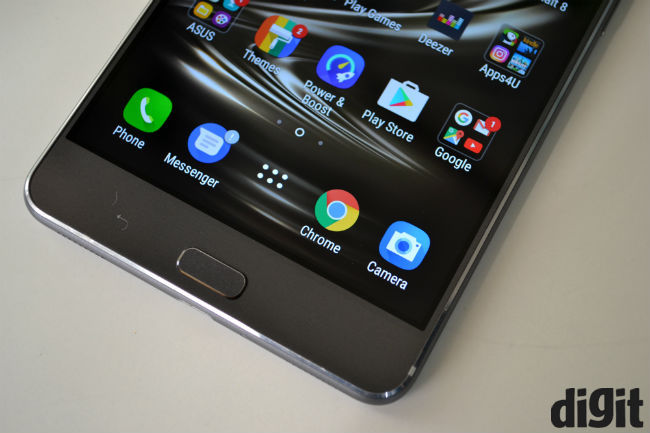 Together, this makes for a sub-par experience, especially from a phone that costs 50k. It’s not that the Zenfone 3 Ultra isn’t unique, just that we haven’t seen such defects on devices in a long time.

However, the thinness and flat body of the Zenfone 3 Ultra are quite likeable. Together, they help the phone slip into your pocket. It’ll stick out of the pocket still, but you’ll be able to slip it in quite easily for a device this size. The slight chamfers on the metal frame look nice and as with most other Zenfones in 2016-17, the concentric circles design is only on the power on/off button. You also get a sandblasted finish on the back, making it grippier but distinctly metallic.

The screen on the Zenfone 3 Ultra is bigger than the Mi Max or Lenovo Phab 2 Plus. However, it is still a 1080p panel. We didn’t question the choice on the two other phones, but with the Zenfone 3 Ultra, we shall. After all, it is a premium smartphone. Moreover, a QHD panel makes so much more sense at this size than it does on regular flagships. 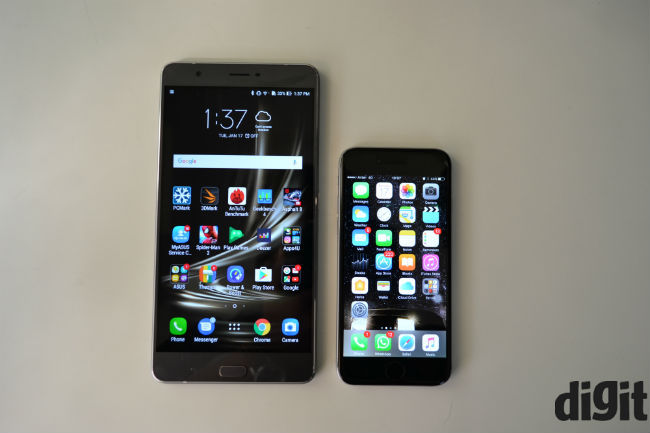 The huge, 6.8 inch display is the highlight of the device

Here, again, we question the choice of the IPS panel. The high contrast ratios and low power consumption of an AMOLED panel would have done this phone a lot of good. If not that, Asus could have calibrated the colours to look warmer for this one.

To be perfectly clear, the Zenfone 3 Ultra’s display is not poor by any measure. It just leaves us wanting for more. The display is is slightly dim, with maximum luminiscence of 516 Lux. The brightness is also uneven, with lower values near the edges.

We have criticised Asus’ UI choices for all of its smartphones this year. Our thoughts on the UI remain the same as they were with the Zenfone 3 Deluxe or Zenfone 3 earlier.

Thankfully, apps conform to the Zenfone 3 Ultra’s display quite easily. Regular apps like Facebook look different, but not out of place.

This is where things get difficult. The Snapdragon 652 is an able, fast and reasonably power efficient SoC. However, its usage has been somewhat synonymous with cheaper smartphones. Sony suffered the perils of this choice (using the Snapdragon 650) earlier, and it seems Asus won’t escape either.

However, while Sony’s Xperia X was reasonably snappy, the Zenfone 3 Ultra is not. The choice of SoC also makes the choice of display resolution clearer. Asus evidently did not want to tax the SD652 to its limit by rendering a QHD display.

In regular usage the phone is reasonably fast, but that just doesn’t work at this price. Combined with Asus’ heavy UI, there are subtle stutters and lags when you launch apps and load times are higher than usual. Similarly, games like Asphalt 8 lag on the menus, and a few times even during gameplay. To be clear, the lags are not enough to affect gameplay, but they make for poor usage on a premium device.

In practice, the Zenfone 3 Ultra’s temperatures never rose beyond 37 degrees when playing games. In fact, the phone renders a constant 30fps frame rate for half an hour without heating up. The temperatures remain within permissible limits during 4K video recording as well.

The Zenfone 3 Ultra has a 23MP rear shooter, with the Sony IMX318 sensor and f/2.0 aperture. This is the same camera that we saw on the Zenfone 3 Deluxe and image quality is no different either.

Just like the Deluxe, the Ultra also blows out the highlights often when shooting under fluorescent lights. It’s impressive under low light, brightening photos artificially, but compromising details. You’ll get the best photos outdoors in adequate sunlight. Photos in such conditions are sharp, reasonably well detailed and with close to source colours. Lastly, the software makes the camera slow, especially in low light conditions.

Overall, the Zenfone 3 Ultra has a decent camera, but it doesn’t belong in the premium range. Phones like the Moto Z and OnePlus 3 shoot better, while Samsung, Sony, Apple and Google have far better cameras on their devices.

The Ultra’s display is a double-edged sword for battery life. It's 4600 mAh can easily last for about 36 hours on regular usage. That includes 5-7 calls, lots of IMs and social networking, and about 25 minutes of gaming. However, the more your screen on time, lesser is the battery life you draw.

On an average, the Zenfone 3 Ultra should easily last a full day for almost any user. It lasts 8 hours and 15 minutes on the PC Mark Work 2.0 Battery test.

When using a premium device, one wants no compromise. Unfortunately, the Zenfone 3 Ultra isn’t without compromises. While it is indeed a decent smartphone, the price is simply outrageous.

You can get the same performance and a better looking display from the Xiaomi Mi Max, which costs less than half of this. The Zenfone 3 Ultra does offer a better camera, but whether that’s enough for you to spend 50k on this is a decision we leave up to you.