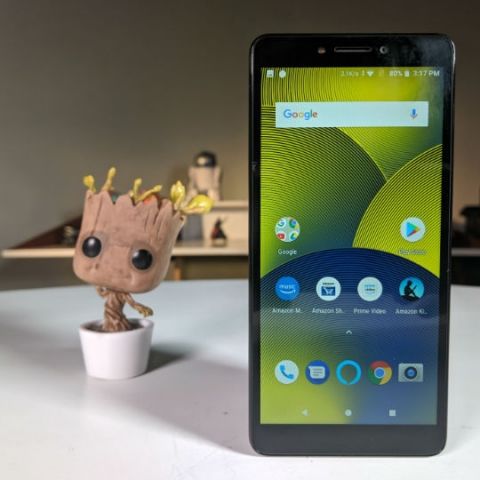 The phone has a good build and the performance is average. It has stock Android UI and Amazon’s brand value which is nice. However, for a thousand rupees more you can get the Redmi 5 which has a fingerprint sensor (something the 10.or D2 lacks) and a metal build. The 10.or D2 works if you will use the phone for calling, messaging, social networking and some video consumption. However, start multitasking and heavy gaming and you will be left wanting more!

If you are looking for a smartphone in the sub 10k price bracket, then you have a few options to choose from. The most popular device under the sub 10k segment has to be the Redmi 5. The Redmi 5 priced at Rs 8,999 brings with it 32GB built-in storage coupled with 3GB RAM. It also has the Snapdragon 450 SoC. The 10.or D2 is priced at Rs 7,999 making it a thousand rupees cheaper than the current budget king. Is the worth saving Rs 1000 and picking up the 10.or D2? Read on to find out. 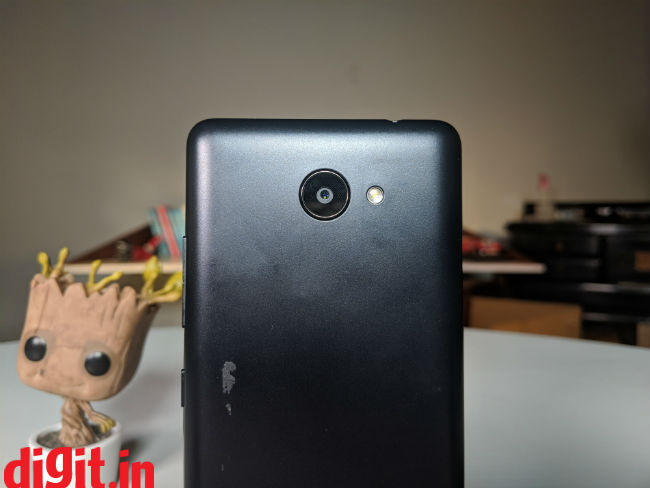 The first thing that you will notice when you hold the device is that it is made of plastic, but the plastic doesn’t feel cheap. It is well constructed rounding off towards the edges at the back which makes the phone comfortable to grip. The back of the device reminds me of the Nokia Lumia 530 and that is a good thing. At the back you have a single camera accompanied by an LED flash. There is no fingerprint sensor on the phone and that is a bummer considering its predecessor had one. The speaker grill is located at the back of the device. At the bottom you have the microUSB port and the headphones jack rests on top. The right of the device has the power button and the volume rocker. The power button and volume rocker are clicky making them comfortable to use. 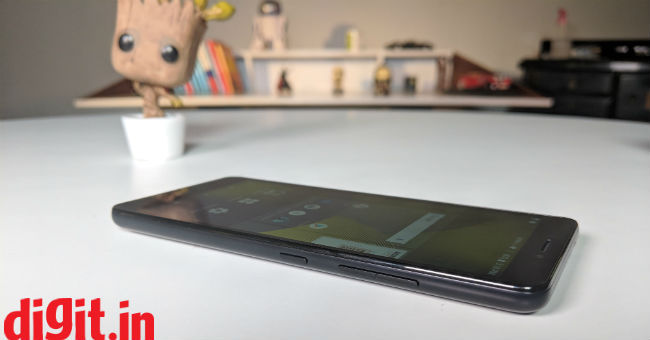 The front of the 10.or D2 has an 18:9 display but it doesn’t feel unnaturally tall like some other smartphones. That is because the size of the display is 5.45-inches. The display size along with the rounded plastic back makes the smartphone comfortable and convenient to use with one hand. However, it is tough to reach the top of the smartphone with single handed use and there is no way to swipe down in the middle of the display to bring the drop-down notifications which is a bummer. You will need to resort to your second hand or adjust your grip on the smartphone to reach all possible corners.

Sticking with the front of the device it is nice to see that the smartphone doesn’t have a notch and that is something I really like.

Overall the build of the device is what you’d expect from a budget smartphone. Its plastic and feels sturdy. The design is simple, uninspiring and the 10.or D2 can easily get lost in a crowd of smartphones. The 10.or D2 has a dedicated microSD card slot so you don’t need to choose between a second SIM or an SD card which is nice. 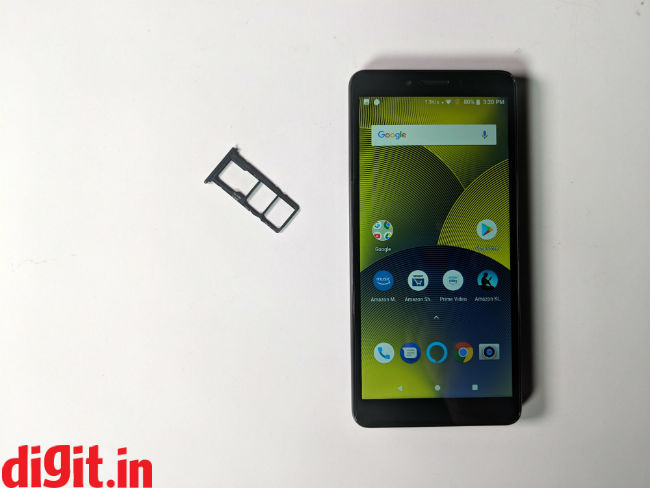 Speaking of the display, the 10.or D2 has an 18:9 display with a 720 x 1440-pixel count. This means the display is essentially 720p. On a 5.45-inch display, it would have been great to see a 1080p display. Where the display succeeds is with its viewing angles. The display has good viewing angles. Watching content from YouTube, Netflix or Prime Videos is a good experience. However, I wish the display were a little brighter. If you will consume content indoors or in situations where the light isn’t a lot, then you should be fine. However, stand directly under the sun and the display’s performance will diminish. The display has a maximum luminance of 448 lux. Overall, considering the price of the phone, the display gets the job done. 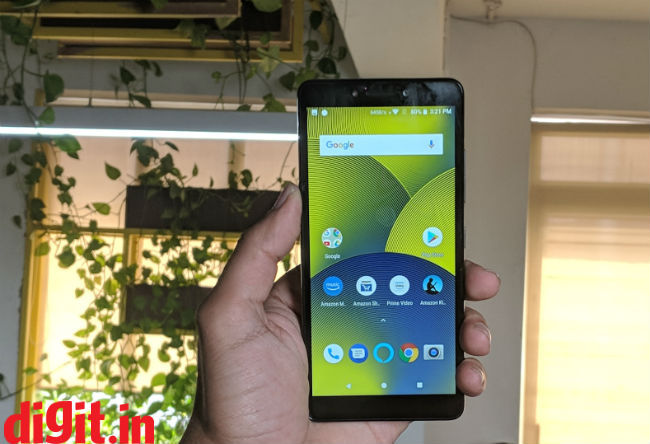 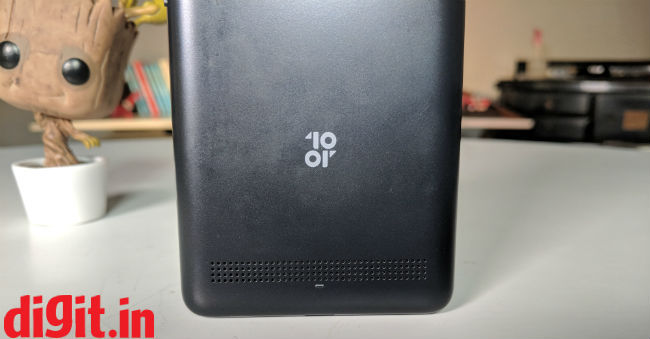 Coming to the call quality from the earpiece it is good and clear. Whatever problems we faced with the audio during a call was mostly due to bad cellular reception. There are times when the audio leaked from the earpiece at full volume, but that’s also because the person at the other end was talking loudly. 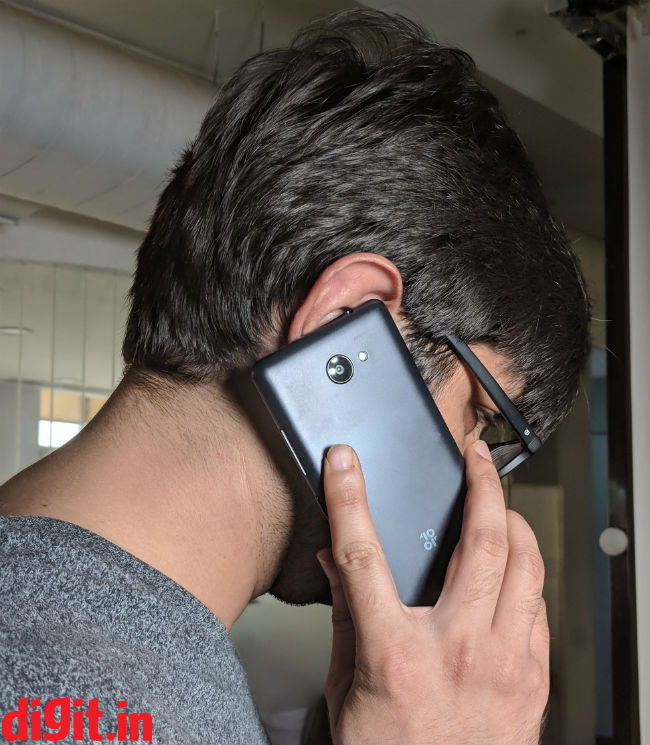 Speaking of the UI on the 10.or D2, the smartphone runs on Android 8.1.0 out of the box. Considering the phone is made by Amazon, it has a bunch of Amazon apps preloaded. Sadly, you can’t uninstall the Amazon apps for space on the smartphone. Apart from the preloaded apps, the UI is stock Android which is good. The UI is fluid until you get into heavy multitasking which is where things wills stutter. Opening social networking apps and video streaming apps keeps the device fluid but throw in some games and you will notice a slowdown.

Overall, the UI is simple and basic and will work for those that don’t want a fancy UI to overlay on their smartphone. If you are looking for a stock Android solution at this price point and don’t want to go for Mi UI on the Redmi 5, then you can consider this. It works well for basic use.

When it comes to real world performance, the device isn’t meant for heavy use. Social networking and watching movies work fine but play Asphalt 9 for 15 minutes and you will see the device fall apart. Not only did we get an average frame rate of 16 frames per second, but also, the device started to stutter for a good 2 minutes even after shutting down the game. If you are looking for a gaming centric phone, then you will need to look elsewhere. However, games like Threes and other simple games that aren’t graphically heavy will work fine. 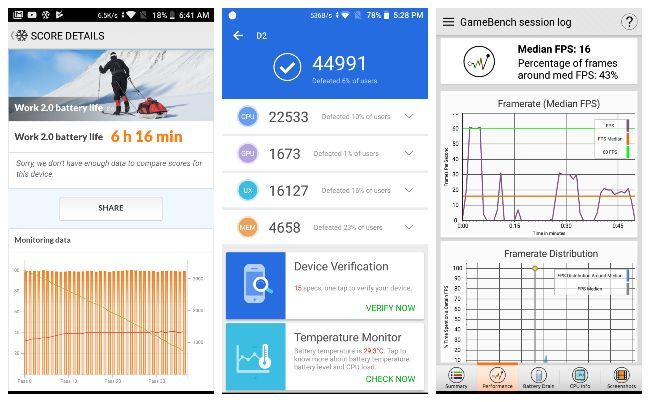 In everyday performance I’d say remember to close apps in the background as they will affect performance going forward. We have the 3GB variant of the phone. The 2GB RAM variant may struggle more over time. Watching YouTube, Netflix, and switching to WhatsApp and then making a call and coming back to the video, all worked well.

When it comes to the optics, the smartphone ‘s rear camera performs surprisingly well when the lighting situation is favourable. In well lit situations the images have some details (considering the price point of the smartphone) and work well for social media posts. Reduce the light and you will see a lot of noise. Don’t expect to get good images in a dark club or under the moonlight. The same can be said for the front camera. 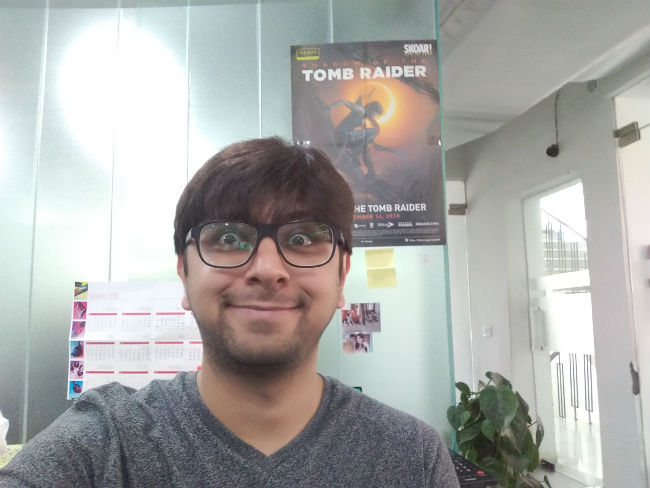 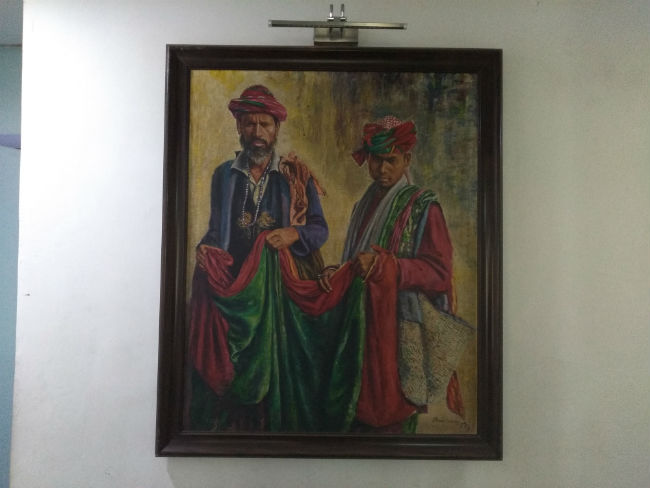 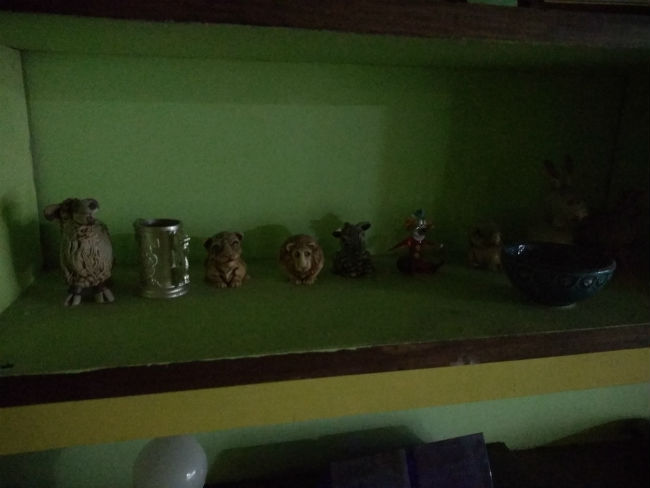 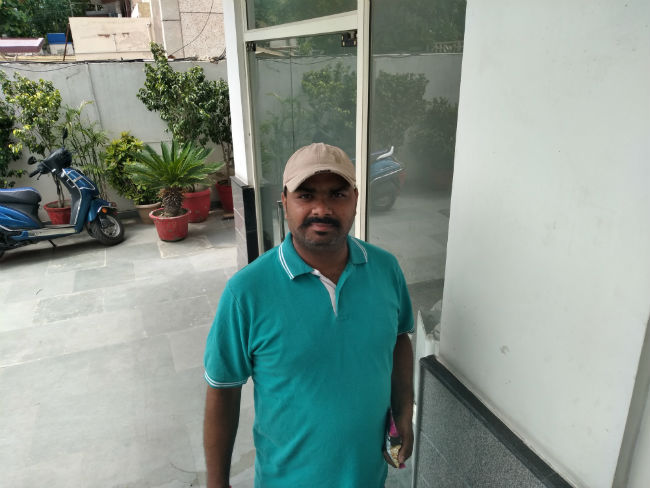 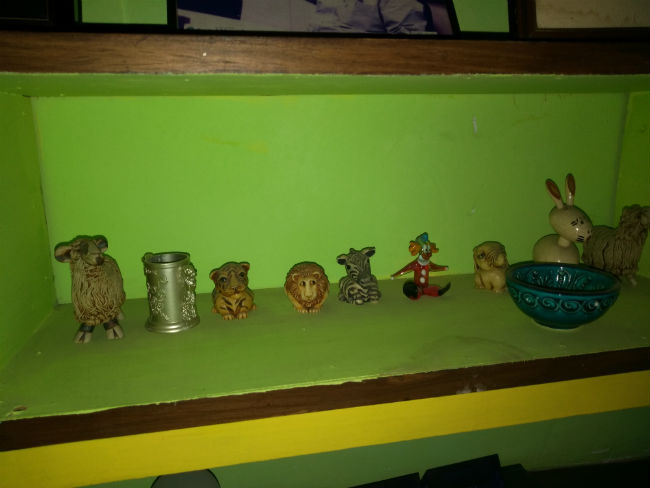 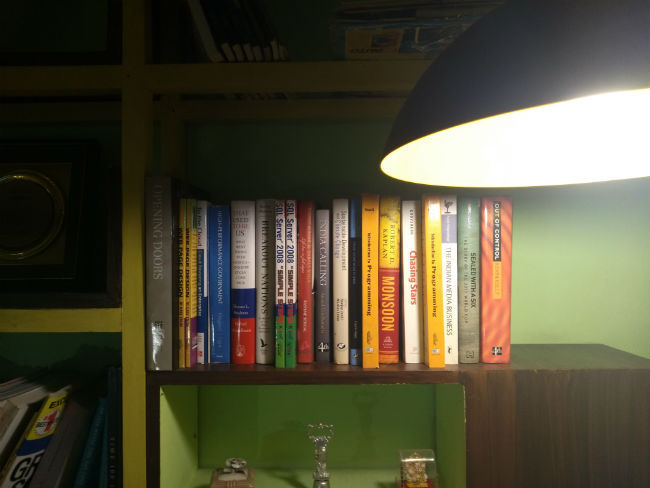 (Above images resized for web)

When it comes to video recording, the smartphone can capture video in 1080p and you have the option of 60fps. However, tapping on the display captures an image and doesn’t shift the point of focus which can be a bummer for some while recording videos.

The 10.or D2 has a 3200mAh battery. Starting the day with 100% battery, I was between 15 and 20 percent at the end of the day that involved my standard slew of calls and messages mixed with some YouTubing and some gaming. I kept the brightness of the phone on auto for the most part. In the PC mark battery test, the device lasted for 6 hours and 16 minutes.

The 3GB 32GB variant of the Redmi 5 is priced at Rs 8,999. Considering the device has a fingerprint sensor, and a good build it is hard to recommend the 10.or D2 for a thousand rupees less. If you are one that is looking for a stock Android experience and heavy use isn’t something you are looking for and want the backing of Amazon’s brand value, then yes, you can consider it. The device has a camera that can click good photos in well lit situations, but low light suffers. The display has good viewing angles, but the performance of the device is average at best. 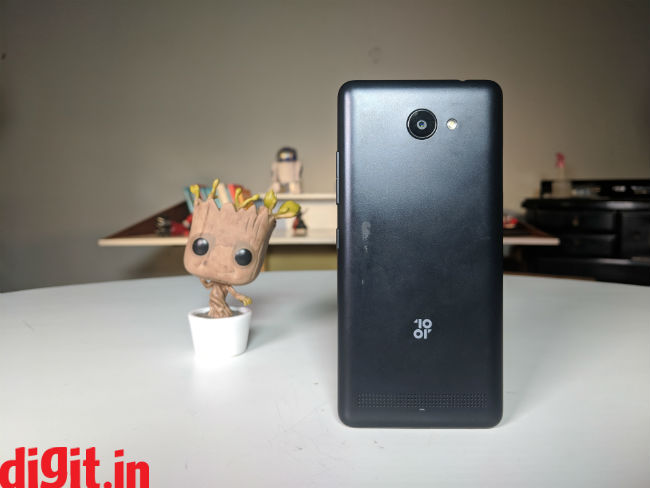