Smartron t.book Flex Core i5 Review: A hybrid that just barely gets the job done 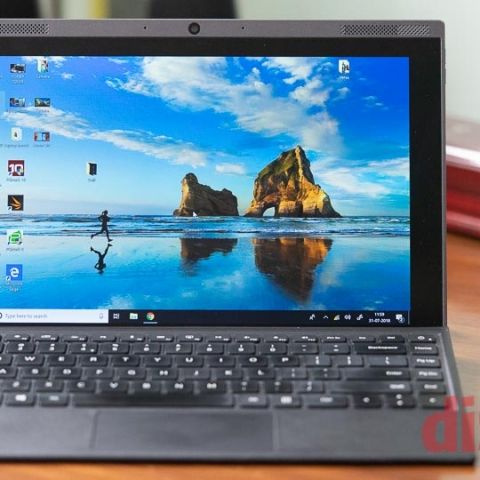 The Smartron tbook flex has great built quality and just enough processing power to get you through basic work duties like using MS Office and browsing the web, but you'd be let down if you tried to run anything heavier.

The Smartron tbook might appear to be a Surface wannabe at first, but it isn’t without its own set of strengths. In our first impressions of the device, we noted that it obviously had a thoughtful, stand-out design. The use of dual-tone colouring was definitely eye-catching, as was the all metal construction. But are good looks and a funky form-factor enough to justify the tbook’s asking price of Rs 42,990 for the Intel M3 version or Rs 52,990 for the Intel Core i5 version.

Build Quality and Design
We noted in our first impressions that the tbook Flex had really good packaging that felt rather premium. The tbook flex is a classic example of when “looks can be deceiving” and we learned that lesson when we pulled the machine out of the box. When unboxing the Flex, there was an assumption that being a budget product, it would probably have cheap construction. On the contrary, the tbook Flex is made of solid aluminium, giving it its sturdy construction and hence, the heft. There are noticeable bezels on all sides of the display and that is great because it means you won’t be accidentally triggering things on the touch-enabled display. 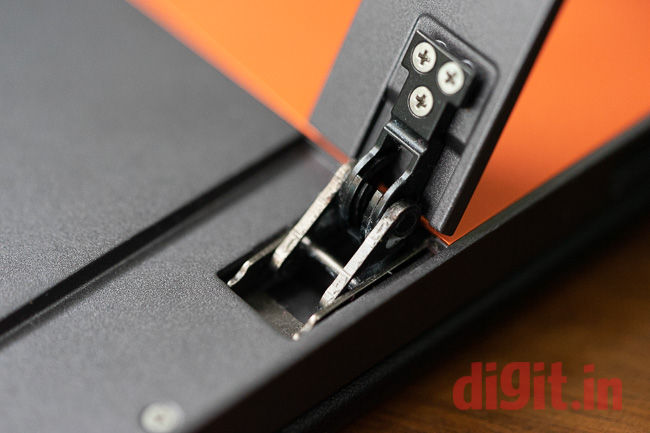 The left and side sides of the tbook flex house the charging and USB ports, but the edges are also magnetic to latch the stylus onto. However, the magnets are not that strong and while the pen will stay attached to the laptop for the most part, it will fall off if it is in your backpack, getting jostled around. It will also fall off if someone accidentally brushes against it, so the best thing to do would be to just use the provided “pen-cap” style slip to attach it to the soft part of the supplied keyboard. On the back, we have the dual tone finish (orange and grey) along with the kickstand that opens up to 150 degrees. Unlike the Microsoft Surface whose kickstand is a solid sheet, the tbook flex has a frame that’s an inch and a half wide. This makes the kickstand easy to bend with your hands, although in normal usage, it won't buckle. We also noticed that while trying to open the kickstand from one side, there was noticeable flex at the other end. We recommend opening the kickstand either using both hands or more from the centre. 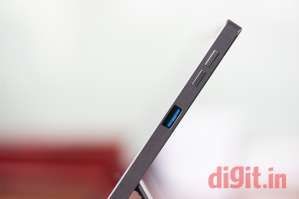 The keyboard is a wholly separate entity from the tablet. It connects to the tablet via a magnetic hinge that locks on pretty tightly. I tried to swing the keyboard around using the tablet and it just wouldn’t fall out. However, don’t try to do this the other way around. The keyboard has a faux leather covering which feels very nice. The other side has a pseudo suede texture which feels nice as well. The keyboard’s construction is pretty good, and typing on it is pretty satisfying. 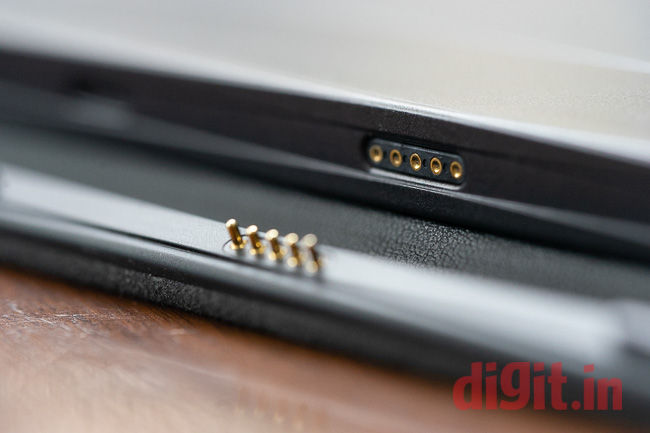 Overall all by itself, the tbook flex weighs 950 grams and with the keyboard attached, 1.3 kilograms. The tbook Flex does not feel like a cheaply built piece of tech by any means. The finishing is pretty good on both the tablet and the keyboard, with the magnetic clip having enough strength for the keyboard to not pop-off when it's dangling.

Display
The tbook Flex features a 12.2-inch LCD-IPS display with QHD resolution (2560x1600). The 16:10 aspect ratio makes the tablet a little wider than we’re used to, but that is a good thing it means more real estate for content. The display also supports touch input and is surprisingly resilient to fingerprints. However, if you’re going to be using the touchscreen a lot, expect to clean it at the end of the day, if not every once in two days. However, what you may not appreciate is the glossy display which reflects a lot of the surrounding world, even indoors. I found that the ambient light would have to be lesser than normal for the reflections to completely disappear.

The tbook’s display is great for watching movies in bed since it dims down all the way to practically 2 nits. The total brightness can go up 180 nits, which is adequately bright for using the tablet outdoors, but the reflections do hinder the experience. At work, it has acceptable performance, that is, it won't be too reflective for your Office needs, but if you’re into proofing content for colour, you may be better off with a machine that has a matte display.

Performance
The review unit of the Smartron tbook flex we reviewed was running on Intel’s 7th generation Core i5 7Y54 processor. This is a SoC designed to be extremely power efficient and is meant to be used in tablets and passively cooled notebooks, which our tbook flex qualifies as. There’s also 4GB of RAM and 128GB of solid-state storage on board. The graphics duties are performed by an Intel Graphics 615 chip and is not designed for any kind of gaming.

In our benchmark tests, the tbook flex doesn’t fare as well as the hybrid machines we have tested so far. In comparison to the Surface, the tbook flex falls significantly behind in most benchmark numbers such as those for PCMark10 or even 3DMark’s Firestrike and even IceStorm Extreme. This is not a machine you judge purely based on benchmarks since its purpose is very different from delivering high-end performance.

In day-to-day usage is where the tbook flex doesn’t disappoint. It was used mostly for work (what its meant for), which included tracking world events online and plenty of article writing. A colleague of mine also used the tbook flex as his “work machine” during his commutes in the metro, which allowed us to understand just how much one can rely on this machine for work. We found that for most day-to-day work tasks, the tbook flex managed to keep up with all our needs. I typed over 10,000 words in total on the keyboard that comes with the tbook flex in the box and found it to be adequately responsive, although the trackpad was not as good as I would have liked. I ended up using an external Bluetooth mouse to improve my experience, not using a regular mouse as I did not want to sacrifice my one of two USB 3.0 ports.

Using the tbook flex on the lap was not so hard, once you get the weight balance right. With the kickstand open to an obtuse angle, the whole thing sits pretty stable. However, if you do accidentally knock it over, grabbing it by the keyboard will not save the tbook flex, as the magnetic links are not strong enough to hold onto the tablet, as we learnt the hard way. For the review, we also received the stylus which works well, but honestly, has little use. Since this tablet isn’t powerful enough to run high-end graphics software, the only utility there is of the pen is in signing documents when needed or making artwork in paint.

The tbook Flex is not a performance powerhouse but is instead a portable, convenient little machine that is designed for the average worker bee. If you’re looking for a tablet/laptop hybrid with enough power to help you make your PowerPoint presentations or juggle numbers in excel before you put them all into a lengthy typed out report, the tbook flex will not disappoint at all.

Bottomline
The Smartron tbook powered by a 7th Gen. Intel Core i5 processor paired with 4GB of RAM will cost you Rs. 52,990. If you need a more powerful hybrid, your next best options is a Microsoft Surface which will cost you a whole lot more, especially since you’re going to have to purchase the keyboard and stylus separately. With the tbook flex, you get the keyboard in the box. The performance of the tbook flex is just enough to let you do the basics. It's not a good fit for creative individuals or anyone whose needs go beyond the use of MS Office and browsers.