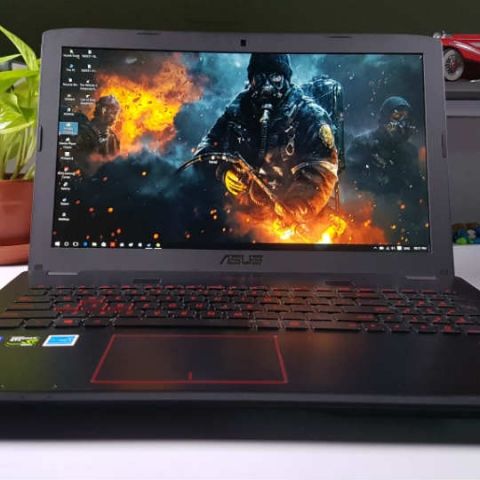 The Asus ROG GL552VW is quite simply one of the best gaming laptops out there, under a budget of Rs. 1 lakh. We would have preferred better battery life, but one can make it work.

The Asus ROG G501VW, that I reviewed recently, was a one of the few lightweight gaming laptops you could buy. Its specifications largely match the GL552VW, making the weight a key element. In fact, the ROG GL552VW may seem like a repackaged version of the G501 to many, one that isn’t as expensive, but heavier. This, however, isn’t the case.

While the two laptops do have similar specifications, the GL552VW has a 1080p display, which makes it snappier than the G501VW. Does it amount to better gaming experience, though? Well, we used the laptop for over a week to find out just that.

Design wise, this is a regular run of the mill gaming laptop. It is made out of plastic, but that is the case with most gaming laptops, due to heat conduction issues with metal. That said, the build quality is quite good and Asus has actually improved on the quality of plastics from previous generations. Asus added a metal panel on top, which adds a touch of premiumness to the design. 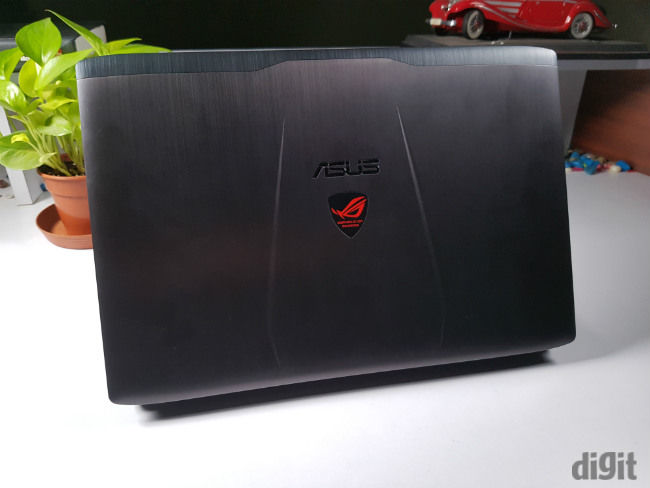 Furthermore, the ROG emblem has led backlighting, which looks very good under dim lights. The keyboard adds to the “I’m a serious gamer” look. Overall, it’s different from other laptops that Asus sells in India.

While there is not much to complain, the keyboard bay has a little flex and the exhaust could have been placed at the rear, just like the ROG G501 we reviewed earlier. Also, the matte black keyboard bay is a fingerprint magnet. Then again, we’re nitpicking.

On the ports front, it is business as usual. The left side of the laptop features two USB 3.0 ports, an ethernet port, one HDMI port and 1 USB 3.1 Type-C port. On the right, there are separate headphone and mic ports. Another USB 3.0 port and a DVD drive (just in case you need one) are also placed here. 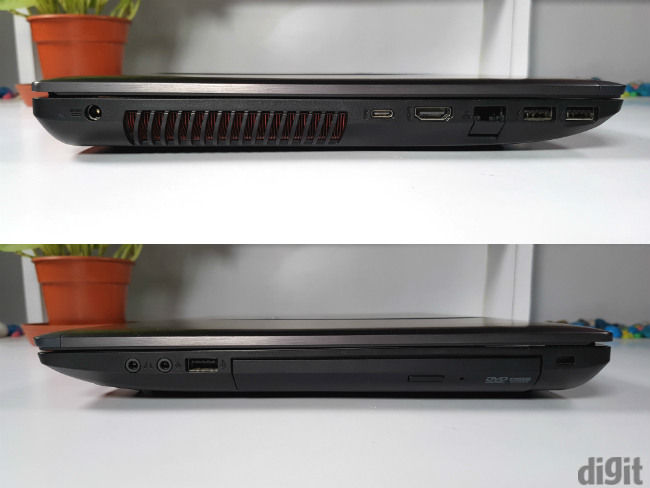 One of the most important features of a gaming laptop is its keyboard. It has to be precise,  responsive and the most importantly, backlit. Well, we prioritise so because, whether you like it or not, all laptops keyboards have smaller travel and silent keys. 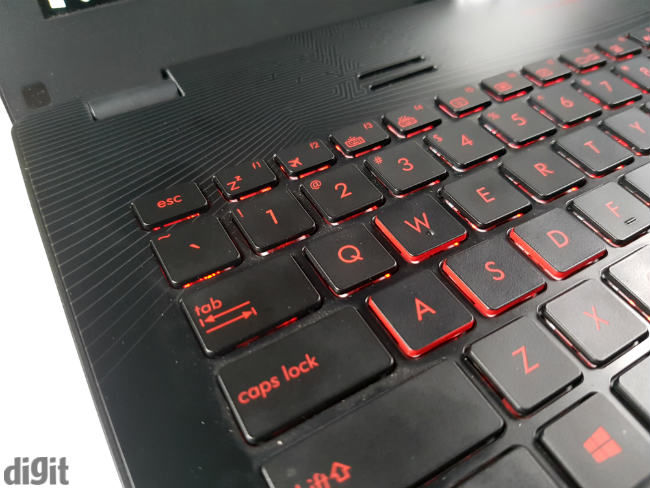 The red backlit matte keyboard on the ROG GL552VW, does the job well. The keys on the keyboard have 1.8mm travel, which have delayed actuation and they do not trigger unless you depress the key all the way through. This actually is good for gaming as you don’t end up casting wrong spells or throw a grenade unnecessarily if you press the wrong key. That said, while the keyboard layout is suitable for typing, we would have preferred a little more pitch on the keyboard. Another thing we didn't like was the inaccessibility of the arrow keys, which are cramped between the alphabetic and numeric keyboard.

The touchpad on the other hand is well proportioned, offers a precise cursor response, albeit delayed. Both the left and right clicks are a bit stiff, but precise, and it supports all the Windows 10 gestures. The touchpad can be locked, so that it doesn't interfere with the inputs while you game. However, there is no lock for the Windows key and it will take a little time to get used to it.

Attaching a mouse will is recommended.

The 1080p display on the ROG GL552 is quite good. The laptop has a matte IPS panel, which offers great colour reproduction and one of the best viewing angles in the market. Just like the G501VW, this laptop also comes with pre-installed Asus software, one of which manages display settings. It works well and is simple to use. 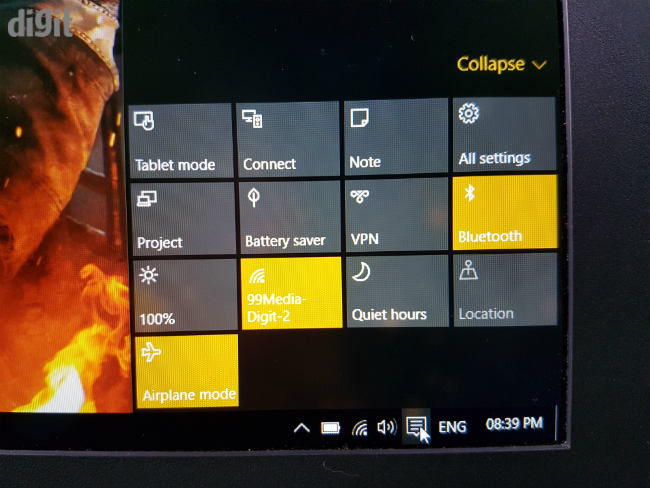 Unlike the G501 though, the GL55VW’s display has 1080p resolution only, which is a good thing. This is mainly because, the 1080p standard is the comfort zone for this laptop, especially the GTX 960M, and you don’t have to manually change game resolutions at various prices.

Talking about gaming, the NVIDIA GeForce GTX 960M and the Intel i7 6700HQ combo is currently the best in the segment. As we mentioned earlier, the GL552VW shares the same specifications as the G501 and the 1080p gaming performance of the two laptops is unsurprisingly, similar. We played the new Doom, Tom Clancy’s Division, Dota 2, Battleborn and Call of Duty Modern Warfare on this laptop and all ran smoothly at 1080p, without any major hiccups. The only kink is, you end up playing most AAA titles at lower graphic settings. That said, you can’t really play on “High”or “Ultra” settings on a laptop, until and unless you invest on at least a GTX 970M/980M enabled device. Some may also argue that building a PC would be much cheaper and that is true, but you will lose the portability. 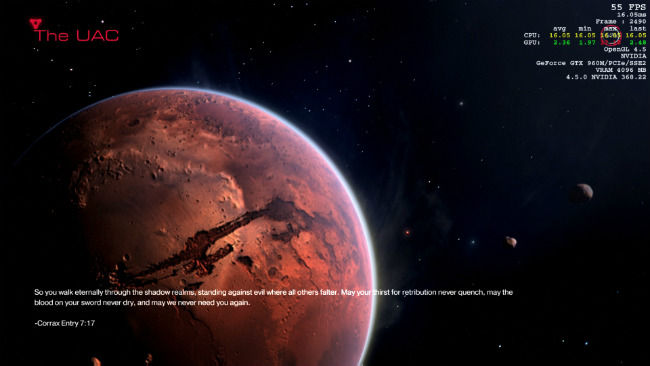 Casual gamers won't find the performance of the GL552VW lacking. Games like DOTA 2 and CS:GO offered 60fps without any issues. The Asus ROG GL552VW is definitely one of the laptops to consider if your budget is less than 1 lakh. Needless to say, the day to day performance, such as video viewing, office work, browsing etc, is a cakewalk.

While battery life isn’t the strongest suit for gaming laptops, we were expecting almost 3 hours of battery life from the 4-cell detachable battery on this one. Sadly, we got only two and half hours’ worth. It is nowhere near the five hour battery life we saw on the ROG G501. It falls in line with most laptops, which are available with similar specifications in the same sub-1 lakh price bracket.

To summarize, the Asus ROG GL552VW looks good, features a top notch specification sheet, but most importantly, it performs well. You can play almost every AAA title with ease on this machine, albeit with lesser settings and sometimes lower frame rates. On the other hand, casual games, such as DOTA 2, CS:GO and others, run flawlessly, averaging above 60fps.

In short, this is one of the best laptops out there if you want to buy a gaming laptop around a Rs. 1 lakh budget. Although, if you are looking for something which is portable as well, the ROG G501VW may be the choice for you.