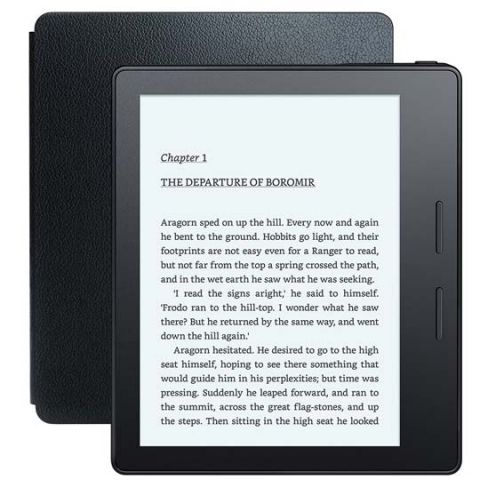 Kindle Oasis does everything that its predecessors did, it’s just that owning one gives you a slight ego boost akin to what them Apple users feel. The Kindle Oasis is pretty much the best ebook reader out there, just that it feels a little overpriced.

The Kindle you’ve known for so long has a new avatar, and it’s designed to be more of a premium offering than everything they’ve released so far. Amazon has taken the taken the existing Kindle Paperwhite and improved almost every aspect it could.

Let’s start with the screen, the existing 6-inch screen comes out to be the ideal size so they’ve kept that the same while reducing the thickness of the plastic bezel. This makes the device appear much smaller than it is thanks to the screen to bezel ratio. Another aspect they’ve left to remain is the screen resolution. Since anything over 300 DPI at reading distance is redundant, they’ve decided to not add more but rather focus on the illumination. A normal Kindle Paperwhite has 4 LEDs along the periphery of the screen on the bottom edge which is then dispersed evenly thanks to the Light Guide which allows light to enter from the side but only allows it to exit through optical features engrained in the Light Guide. This was improved when the Kindle Voyage added two more LEDs and an adaptive light sensor to modify light levels according to ambient light present. With the Kindle Oasis, they’ve moved the LED strip to the sides and increased its count to 10 LEDs for a more even dispersion. The screen texture has also been improved. While opinions might differ over the texture since everyone has their own preferences, the texture has been made a little more smoother allowing for easier flicking.

Moving on, Amazon has bought back the mechanical page turn buttons. Having been absent in the first and second Paperwhites and even the Kindle Voyage, it seems the buttons were a much-demanded feature in Amazon’s customer feedback and this prompted their return. And the buttons flip functions based on which way you’re holding the device so that whatever button is on the top will turn the page and the one on the bottom will turn it back. The buttons provide a minor tactile feedback just in case the visual feedback of the page turning isn’t enough for you.

To reduce the size of the device, Amazon had to resort to some ingenious techniques. To begin with, they’ve separated the battery into two parts, one within the device and the major portion within the cover. The two come together thanks to a bunch of powerful magnets and the spring loaded contact points ensure that minor flexing doesn’t break contact. Taking out a huge chunk of the battery is what primarily reduced the weight down to 131 grams compared to the Voyage which was 49 grams heavier. Another significant construction improvement was that the EMI (Electromagnetic Interference) shield which used to be a separate mechanical part till now has been eliminated and in its place, they’ve metal-plated the rear plastic shroud. Thus, function has been retained while reducing weight.

The dual battery design gives more cumulative battery life. The Kindle has an internal 245 mAh battery and the cover has a 1290 mAh battery. The two together result in a decent 1535 mAh setup which is a 16 percent improvement over the Kindle Voyage’s 1320 mAh battery. This setup makes the Oasis last for two weeks longer than the Voyage which only lasted 4 weeks per charge. However, the charging port only exists on the device and the cover gets its juice from the Kindle once it has been topped up. Also, when fused, the cover’s battery is first to be consumed so the cover will have to endure a lot more charge-discharge cycles than a single part configuration. And we don’t need to remind you that erratic charge/discharge cycles affect battery life in the long run. Since this is a prolonged test, we won’t know about it for quite some time. 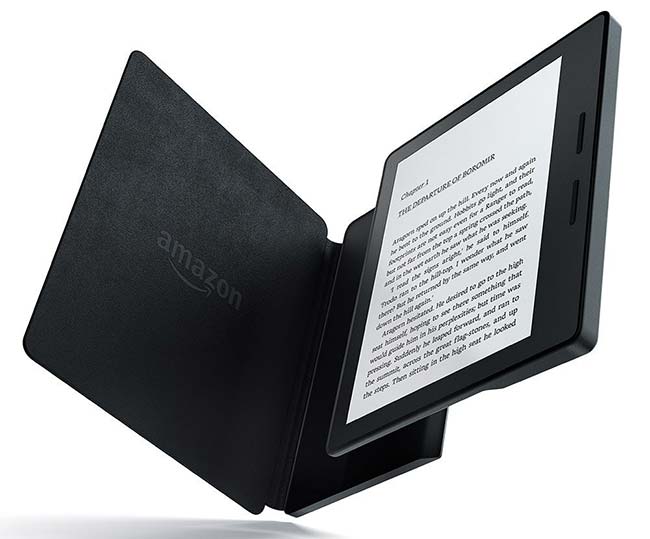 Coming to the UI. An improved SoC and 500 MB additional RAM have definitely added to making the UI snappier. And that very UI has undergone a radical redesign which has been bought to other kindles via software updates. The top toolbar has retained its position but the library has been squeezed down and relegated to roughly 20 percent of the screen. You now have book recommendations and easy access to your reading list giving the device a more web based look and feel. And you also have a new typeface called Ember which will remain exclusive to the Oasis for a few months. Last year, Amazon had added Bookerly which was well received and now we have Ember which is another Sans Serif typeface. Ember makes text more readable when you have very narrow kerning and come across ligatures.

The price of the Kindle Oasis has been under much debate. A price tag of Rs. 23,999 for the Wi-Fi version does seem a bit on the higher side since all the improvements made so far don’t seem to have jumped by a factor of two like the price has. However, if you factor in the modular construction, increased battery capacity, leather cover, size reduction, improved SoC, higher RAM capacity and the new typeface; it all starts to seem justified but not quite. Since flagship smartphones like the OnePlus One and OP Two cost the same, you can’t blame people for calling the Kindle Oasis expensive especially when you start comparing the feature sets. While it doesn’t make your existing Kindle feel obsolete, it does offer quite a lot of interesting aspects. Which is why we used the word “premium”, the Kindle Oasis does everything that its predecessors did, it’s just that owning one gives you a slight ego boost akin to what them Apple users feel. The Kindle Oasis is pretty much the best ebook reader out there, just that it feels a little overpriced.