Whizzer Kylin A-HE03 Review: Style and substance, but not for everyone 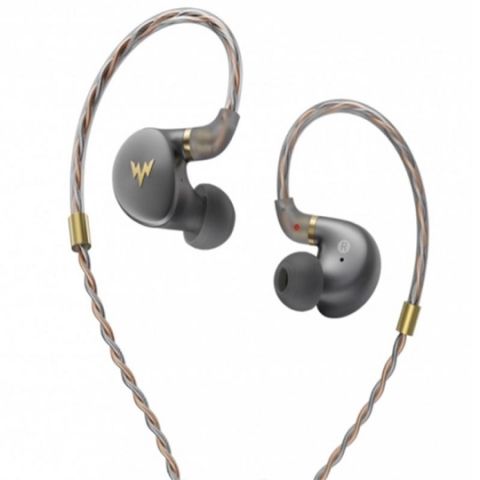 Right from the start, the Whizzer Kylin A-HE03 has been designed to impress. From the moment you unpack the box, up to tugging the ear hooks behind your ears and pushing the angled, well-finished tips into your ears. From that point on, the IEM starts to make false moves in different parts of the sound spectrum. However, it is far from being bad and offers a really good option for anyone looking for tonnes of bass and doesn’t mind the sacrifice of precision. With this one, the relatively new brand Whizzer has made a strong case for the future of its IEMs.

Whizzer is a relatively new entrant in the IEM market. The Kylin A-HE03 is currently their flagship and by the looks of it, it promises a lot. Including Knowles armature in their first hybrid shows you that Whizzer is getting serious about establishing its own identity in the world of audio, even if that involves a departure from its previous IEMs. How well does it hold up in our tests? Let’s find out, but first, let us see what the box offers. 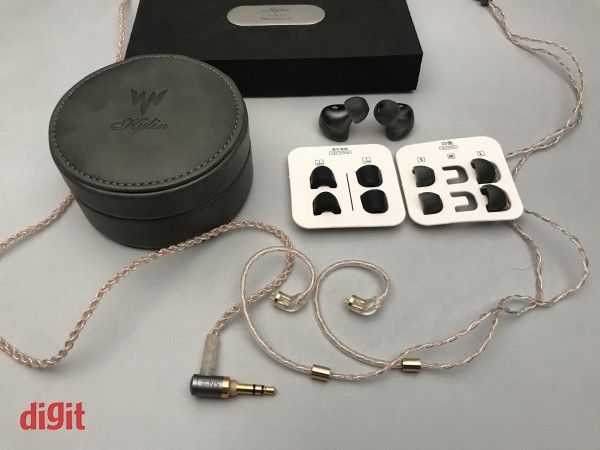 What you get in the box

The packaging of the A-HE03 is worth mentioning. While the outer sleeve contains most of the information about the product itself, there’s a small cutout for the Kylin logo embossed in gold on the smooth sandpaper textured black box underneath. You slide that out to reveal a subtle ‘Type Kylin A-HE’ branding on the box, which seems to indicate that Whizzer fully intends to continue this series.

The branding on the box indicates future models in this range, possibly with different driver combinations

Since A-HE03 comes with three drivers, there’s room to play around with driver arrangements and model names, but more on that later. On the front flap, you have the Kylin logo embossed in black, with the Chinese characters for the name beside it. Open the magnetic flap and you’re greeted by a large foam platter that houses the earpieces as well as a metal plaque bearing the ‘Kylin A-HE03’ branding as well as a serial number. Beneath this, you have two foam inserts, one housing the cable and a velcro strip, the other housing a rather well-designed carrying case which contains the additional tips. 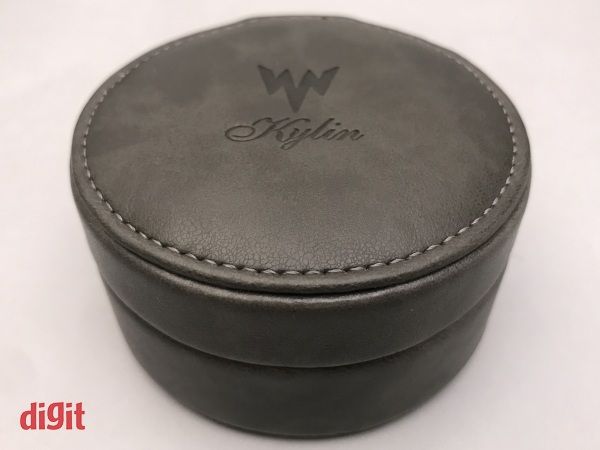 The Kylin A-HE03 is built to leave a mark. The shell is made of aluminium-magnesium alloy and is built of three primary parts. The backplate has a fingerprint-like texture where the highlight is a raised gold metallic Whizzer logo, alongside a vent that faces forward when you wear the IEM. 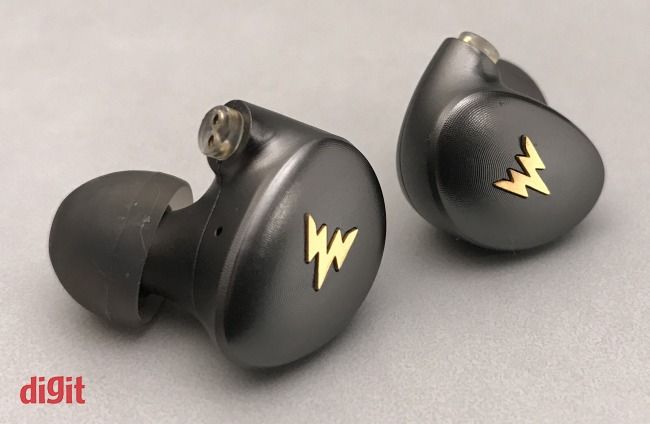 The branding on the back plate

The inner plate is has a smoother finish and also comes with a small pinhole vent to handle driver flex, as well as markings to denote the L/R classification. The overall colour job on these two plates is flawless, and the finish is built to remove all straight lines from the A-HE03. The third part is the golden nozzle that has a machine finished lip that is capable of holding the tips securely. Each of these parts fits seamlessly together and flow into each other. The port placement for the 0.78mm 2-Pin connector cables is horizontal, which leads us to the cable.

The cable comprises of a copper-silver braid up to the Y-split post which it is twisted up to the individual ear-hooks, where it is sheathed in transparent, moderately stiff plastic. It is rated 5N for purity. 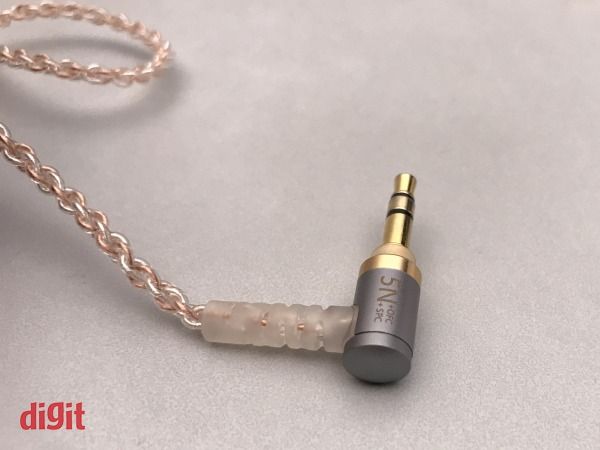 The cable is labeled 5N for purity

The ear hooks have metal rings on both ends. The gold beveling on the Y-split seems tastefully done, and the chin cinch blends in with it smoothly when not in use, both built in the same alloy as the earphone shells. 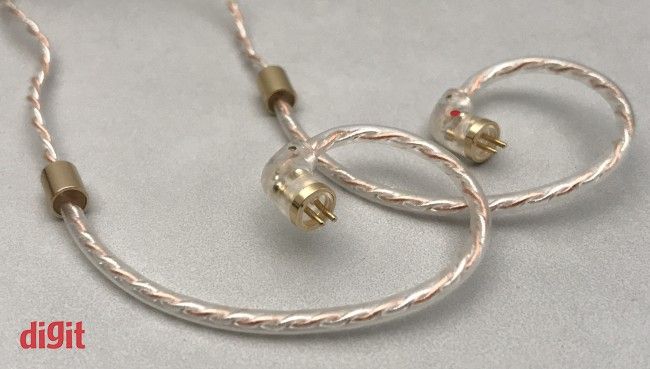 The ear hooks have an additional transparent casing

The 3.5mm jack has an ample amount of extension to account for phone cases and being stored in the pocket. While the cable below the Y-split is tangle free thanks to the braiding, the same cannot be said for the part above it.

We must mention that we’ve seen better options in tips even from some cheaper alternatives. The quality of the tips included with the Kylin A-HE03 is great, however, it can get a bit limiting in certain cases. We did not face any such issues, as the included foam tips were preferable for their superior isolation. Without the foam tips, you might experience some external noise flowing in, due to the vents, but not at a level that can be distracting. On the other hand, due to the different connector placement and the ear hooks, some users might need regular readjustments to achieve consistent isolation on the A-HE03.

There’s a triple driver setup on board the Whizzer Kylin A-HE03. The Knowles armatures are clearly responsible for the mids and the treble, with the single dynamic driver handling the lows. The impedance and sensitivity are both pretty low at 16ohms and 98db respectively, given the drivers in place. You can use these with a smartphone output without feeling the absence of a dedicated amplifier. 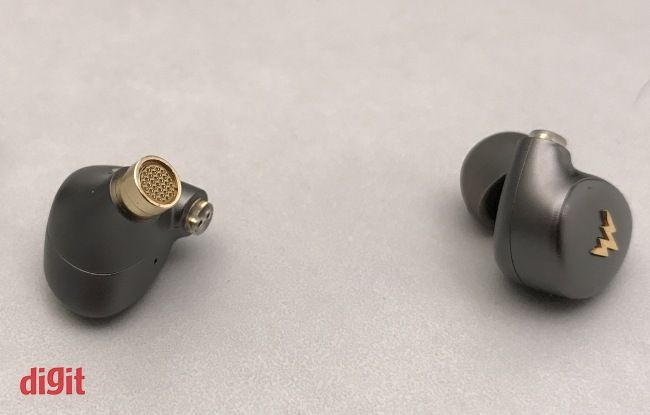 If deep and rumbling bass is your thing, then the Kylin will not disappoint you. There’s a lot of emphasis on the lower frequencies that make the bass sound deep and powerful, almost downright dark. If it were not for the Knowles armatures in the mix, the bass would have easily overshadowed the other parts of the frequency spectrum. However, a lot of bass doesn’t always imply good quality bass, and that is the case here as well, unfortunately. The bass can tend to be a bit woolly, lacking in speed and precision. This is especially evident in portions like the precise beats right before the chorus on Fox on the Run by Sweet, or at the beginning of Arabella from Arctic Monkeys, that kind of melt together on the A-HE03 and misses the impact. However, tracks like Hotline Bling from Drake sound seismic and impactful, and just sheer fun. The rumble comes from the greater emphasis on the lower end, which is contrary to the more popular approach of boosting the mid-bass. The overall sonic performance is great, but not the best we've heard

The mids have a clear V-shaped signature about them. Putting Choti si Asha on via the Shanling M0 and we could distinguish the numerous instruments that sounded well-textured and accurate in terms of tonality. Another bit that comes as a part of the V-shaped signature is the preference for male vocals that the Kylin exhibits. Chris Rea’s vocals on Call on me sound deep, husky, with the gravel-like quality to them retained, whereas Adele on Hello sounds bright but lacks the same richness.

The BA drivers shine through in the treble to the greatest extent. There’s ample detail and texturing across the treble expression. The signature does favour the lower end of the treble more, sounding crisp but also avoiding any sibilance or fatigue even after long listening sessions and intense tracks like Selkies by BTBAM. There are no complaints in the instrument separation department either, as is evident on tracks like Pull Me Under from Dream Theater. The soundstaging is a bit lacking, which is noticeable when Hunter by Bjork felt a bit closed up, especially in the parts with the revolving beats.

The Kylin A-HE03 is one of the most well-built pair of IEMs we’ve tried at its price point. The materials used and the finish offered forms up an exquisite combination that is found more often in more expensive units. While there could be more options for tips, there’s nothing particular to complain in the accessories department, not after the well-padded travel case. The cable used is also quite good, if not the best we’ve experienced due to some minor issues. The sound signature, on the other hand, is where the A-HE03 shows cracks in its spectacular armour. While bassheads might be able to oversee its shortcomings and even love the way it sounds, individuals who prefer a more balanced sound signature could see it as an inferior option as compared to more neutral alternatives. The Kylin A-HE03 is by no means bad, and definitely makes a good option for those not looking to nitpick.