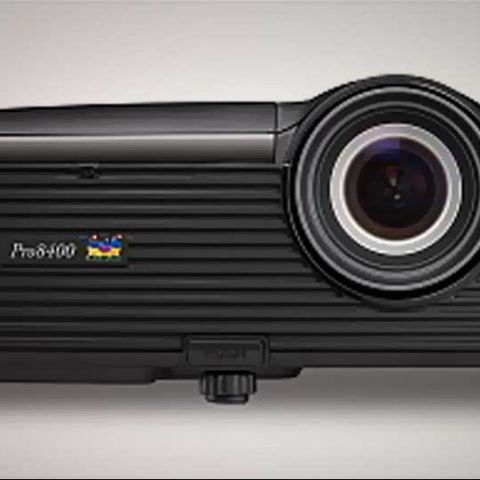 This is one projector that fights ambient light, and wins the battle! Bright enough to actually work in any room at any time of the day, the Pro8400 is meant for someone who would like a projector at home, but doesnï¿½t really have a dedicated darkened home theater room. If you are in the market for a projector, this one is worth considering.

Expensive projectors are slowly and steadily making their way into the mainstream market. We had reviewed the LG AF115 projector sometime back, and the performance was very impressive. Happy to report, the Viewsonic Pro8400 is walking down the same path. And you can easily keep these two as solid options on your consideration list.

Look & Feel
Straight out of the box, the Pro8400 looks the part - a full-fledged ‘I mean business’ HD projector. At close to 4kg, this projector does have the sheer bulk and the looks of a high-end projector. Viewsonic have given it a blend of glossy black and matte black colour. There is a grille design running around the entire projector, and some of them are actually vents hidden under them! All the controls - power, navigation and volume are on the top panel. The rear panel is where all the controls are - 2 HDMI inputs included.

Features & Performance
This is a Full HD projector with a 3000:1 contrast ratio and 4000 ANSI lumens. Viewsonic claim that the lamp has a life of 5000 hours in eco-mode and 4000 hours in normal mode. It has a native aspect ratio of 16:9, but doesn’t look very bad with 4:3 videos either.

The setup is simple. You have 2 HDMI inputs, and that helps if you need to connect multiple devices to the projector. You can just leave them connected and not worry about switching cables again and again. You can simply switch the source, like you would on your TV or AV receiver. The Pro8400 has built-in speakers, but more importantly, it can spit out audio as well, something some projectors don’t seem to be doing off late. It is safe to assume that anyone buying these expensive projectors will hook these up to a home theater setup, but we appreciate that at least the audio out feature is included in this device.

We had placed the projector about 3 feet from the wall, and got about 80-inches big display. To utilize the two HDMI inputs, we hooked up the TataSky HD set top box and a WD Live HD media player to the Pro8400 simultaneously. First off, we checked the SD content performance, both by playing some SD video off the media player (no upscale) and then some SD channels on the DTH. To say that the performance was satisfactory would be an understatement. It handled the low-ish resolutions quite well even when blown up to this size. Admittedly, it did lack the crispness.

To compensate for that, we turned up the sharpness slider, but all that did was make the image noisier. Keeping the sharpness setting around 10 is perfect for SD content. Speaking of which, even when watching HD content, it shouldn’t be set at more than 20 (which is more than adequate), else you will get a rough specky tinge to the picture. We then switched to HD content, and to Star Movies HD and ESPN HD on TataSky. Watching the Barclays Premier League was an absolute delight in HD, and on a display this size!

The colour reproduction was good, quite visible by the uniformity of the green grass and the clearly visible jerseys of players on top of it. The only little niggle was when the camera panned quickly, the crowd would seem like jagged lines momentarily. Movies in HD were fun to watch. This is where the depth of the blacks was of paramount importance, and this one did as well as the LG AF115 we had reviewed earlier. The only niggle is that the whites tend to be overbearingly bright, and that can result in making the picture a little stressful on the eyes. Secondly, audio handling means that you can either directly connect a video source with an audio receiver, or output the audio via the projector.

We were deeply impressed by the brightness levels offered by this projector. So much so that this is the first projector to have won the battle against daylight streaming in through the windows, without even a minor scratch on its own picture reproduction! Brightness and contrast levels set just above 50%, and the picture was clearly visible on the wall despite a lot of ambient light in the room. Usually projectors need a very dark room to work at their optimum, but this one will handle any adversity thrown in its path! For most rooms, brightness levels just around 40% would be more than adequate. Any more, and the eyes will feel the strain. Speaking of which, there are elaborate picture tweaking options, akin to what we see in televisions.

Projectors tend to heat a lot, particularly when used in a non-AC environment. This being the onset of the winter in Delhi, we really didn’t have the guts to switch on the AC! While the Pro8400 did feel the heat, the fans were surprisingly not very loud.

Our Take
This is one projector that fights ambient light, and wins the battle! Bright enough to actually work in any room at any time of the day, the Pro8400 is meant for someone who would like a projector at home, but doesn’t really have a dedicated darkened home theater room. We believe that the Pro8400 is the ideal projector for homes that don’t have the dedicated dark room for this to be installed in. This will be equally comfortable in your bedroom as well as your living room. The image reproduction is delightful, and handles SD content better than most. The only real niggle is that the whites tend to be overbearing at times. You can also consider the LG AF115, which offers excellent performance as well.