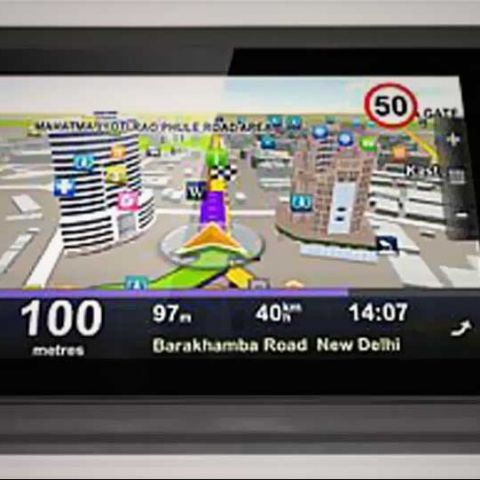 Without a shadow of doubt, the CarPad 5 is a huge improvement over the predecessor. The smaller form factor works wonders, particularly when it is secured in the windshield mount. Navigation quality and the maps are brilliant, and so is the battery life. Display should have been slightly less reflective, but at the moment, it will work well in sunlight with brightness upwards of 80%. We don't think how the call/phone features will appeal to anyone. However, this is an Android tablet essentially, and you have access to the Play Store too!

Build & Design
The 5-inch display size means this CarPad is much smaller than its 7-inch predecessor. The design, and the thickness, means it looks like a slab, but is very functional. Below the display in portrait mode are the three touch sensitive keys – return, menu and home. The left spine is completely clean, while the power key and the volume rocker are on the right panel. On the top is where there is the 3.5mm headphone jack, the SIM card slot, microSD card slot and the mini USB port. Flip it over, and there is the speaker on one side of the panel, but what catches your attention is the rubberized finish.

The CarPad 5’s windscreen mount has slightly less reach than most other mounts that come along with navigation devices. This can be adjusted for the length of the arm, and the height the navigator should be. However, the design isn’t the slickest one to install, reason being that the suction cup and the armature of the navigator dock are too close together. The screw at the back of the dock is too close to the cup, and you really need to wriggle your fingers through. Secondly, with the vibrations and potholes, the mount does tend to become slightly loose rather quickly. Before embarking on the next journey, do ensure that the navigator dock is secured well.

The good part about this design is that a more elaborate tray/shelf can be used at the front for the CarPad 5 to sit in. Unlike the conventional designs that clamp directly on to the navigator, this one let’s you slide the navigator in, secured from the two sides, the bottom and even the back.

Overall, the CarPad 5 is a rather well built device, and has a very rugged feel to it. There is absolutely no flex anywhere on the entire device, and the rubberized finish helps with the overall solidity it attempts to portray.

Features & Specifications
Unlike the predecessor, the CarPad 5 has a more compact 5-inch display. The resolution is 480 x 800 pixels, which seems sufficient for the task this device is meant to do. We will not hold the slight lack of crispness of this display, evident while reading text that is smaller than a certain font size. But that does not impact how you read the maps, or the quality of the navigation. The touch response is much better than what we have seen in GPS devices, but this one still isn’t the capacitive display we expected on a device that costs so much.

A 1GHz Exynos 3110 processor powers the CarPad, and is a single core edition. We speak about this because the CarPad, beneath all the navigation goodness, is essentially an Android tablet. On the device, preloaded, is Android 2.3.4 (Gingerbread), with the Navigation software as an added app. The icing on the cake is that you get full access to the Google Play Store, and the apps.

The usability of this tablet is huge, even when it is not clamped on the windshield telling you when to take the next right turn! Speaking of which, the CarPad also has a SIM-card slot, and can connect to 3G. This can be used as a phone, but does not have an earpiece, and you will have to rely on the speaker or a Bluetooth headset. The microSD slot completes the tablet experience!

Performance
The CarPad 5 may be dressed up as part of the congregation of Android tablets, but this is primarily a navigation device, and that is what we are focusing on. On the home screen is the Navigation app. Open it up, and it takes around 10 seconds to lock on to the satellites for the signal. The interface of the maps is brilliant, just like the Aura maps we had seen in the Zx250 navigator. The 3D maps, rendering and the very look of the maps has a premium feel to it. The 3D buildings and landmarks render extremely well. Navigation quality is very similar to the one we experienced on the Zx250, and it works brilliantly within Delhi.

However, surprisingly, it does tend to stick to one route recommendation only in the NCR (National Capital Region), even though you may be consistently be taking an alternate route just to see of it understands your preference! The lady speaking out the directions is quite precise with an easy to understand accent. The speaker doesn’t jar or distort even if you push the volume to the max. Unlike all other navigators we have tested till now, the CarPad 5 has dedicated volume controls.

Being a 3G tablet, the MapmyIndia CarPad 5 can be used for a lot of other tasks as well, the first being the ability to use as a phone. Additionally, you can download apps on this from the Play Store, just like on a normal tablet. In the car, you can hook this up to the audio system via the 3.5mm audio out and playback music as well.

We tested the battery life of the CarPad 5 as a navigator, and it will offer 35-40kms on a single charge. That is not bad at all, considering that these devices tend to become quite warm next to the windshield.

Bottom Line
Everything about the MapmyIndia CarPad 5 is quite positive – works brilliantly as a navigator, the tablet and Play Store capabilities are a huge bonus and you can use this as a phone too, if need be. However, someone buying this, we reckon, is buying this primarily as a navigation device. And for that, the price seems a tad to high. Ideally, why wouldn’t someone pick up a much better tablet for this price (or even lesser), and install the MapmyIndia Sygic maps on that to get the same result? The price of the CarPad 5 needs a rethink, because all else is very impressive.