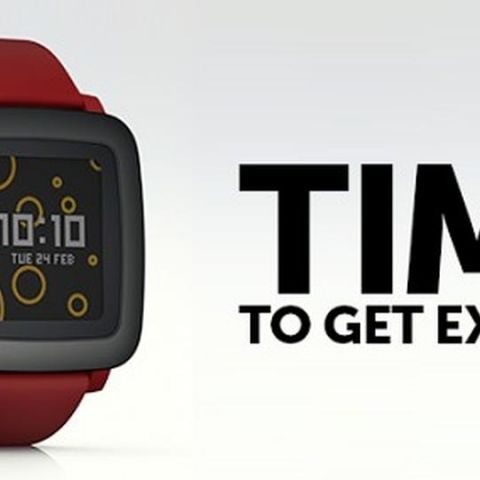 Pebble has announced Pebble Time, its third-generation smartwatch with an all new design and a color e-paper display. The smartwatch will be available exclusively via a kickstarter campaign for a special price of $159. The Pebble Time has already broken Kickstarter records with its $500,000 goal reached in just half an hour of its launch. Within 12 hours of its launch, the campaign has raised more than $7,700,000.

The Pebble Time s 20 percent slimmer than Pebble's previous models and comes with a Gorilla Glass and a stainless steel bezel. It has a 64-color always on display that is visible in direct sunlight making it easy to check the time at a glance.

The smartwatch also has a microphone for responding to incoming messages and recording voice notes. Pebble says that the watch is water resistant, even with the hole for the microphone. Voice typing also supports major messengers including Facebook Messenger, Hangouts, Gmail and Whatsapp. The smartwatch runs Android 4.0+ as well as iOS 8 and up. The company promises a 7 day battery life for the smartwatch.

The watch has a new interface that allows developers to push new apps without having to build either Pebble or smartphone apps. The company has tied up with ESPN, The Weather Channel, Evernote, and Pandora to input data into the Time's timeline.

Pebble had launched its first smartwatch on kickstarter as well and recieved great response.  Pebble Time will be available in three colors: white, black, or red. The smartwatch will start shipping in May at a retail price of $199.

Android Wear off to flat start, Apple Watch likely to fuel the segment