Apple Watch expected to be announced on March 9 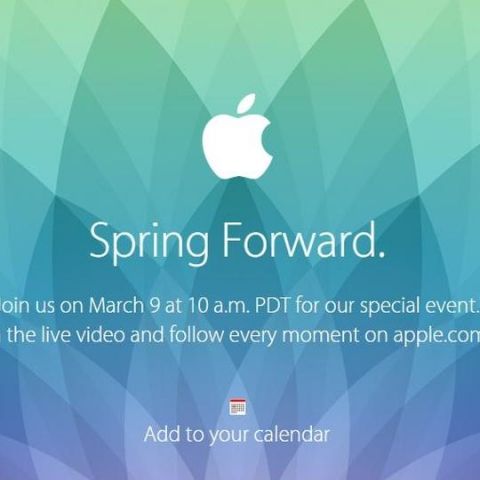 Apple has sent out invites for its 'Spring Forward' event on March 9, in California where the company is expected to announce the final pricing and availability of its Apple Watch.

According to reports, Apple may demonstrate some more features of its Apple watch and is likely to reveal its final pricing and availability. Apple Watch's aluminum Sport model is expected to retail at $350, but no information has been revealed about the price of its standard and ultra-luxurious Apple Watch Edition.

Apple has started to train its employees in different stores about the various functions of the new wearable and is also planning to introduce a special sales process. The company has also installed 'Safes' in its stores for the premium Apple Watch Gold edition, which the company has been promoting as an expensive jewellery item rather than a tech focused wearable.

Apple had unveiled the Apple Watch along with the iPhone 6 and iPhone 6 Plus last year. However due to some issues the wearables launch was delayed and recently CEO Tim Cook had revealed that the device will start shipping in April.

The much awaited wearable is expected to kick start the wearable segment and triple sales in its first year. Apple Watch is the company's first important launch, since 2010 when Steve Jobs unveiled the original iPad.

Rumors about a new music service based on Beats Music streaming service and a MacBook Air with a new design have also been making the rounds. However it remains unclear whether Apple will also share these announcements at the March 9 event.