Vivo V7+ is expected to be the first smartphone from the company to sport a FullView display. The smartphone might also feature an improved 24MP selfie camera. 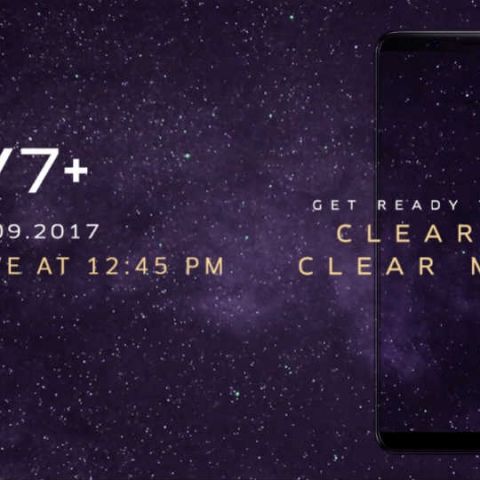 Vivo, the third largest smartphone brand in India will announce the launch of another selfie-centric smartphone today. The smartphone is expected to be the company's foray into a segment of mobile devices sporting displays with taller 18:9 aspect ratio. The launch event is scheduled to begin at 12.45PM IST and the live stream will be available on the company's Facebook, Twitter and YouTube handles. Vivo has also tied up with Hotstar, Flipkart and Amazon for today's launch.

The Vivo V7+ is expected to be the successor to the V5 Plus announced in January this year. There are not many detail available about the device, but Vivo's teaser suggests it will feature a FullView display with thinner bezels and a taller aspect ratio. The display seems similar to LG's FullVision display and Samsung's Infinity Display offering 18:9 aspect ratio. The Vivo V7+ is also expected to be the first smartphone in the market to feature a 24MP selfie camera.

The Vivo V5s and V5 Plus featured a 20MP selfie camera and Vivo will pitch the V7+ as the ultimate selfie smartphone. Some reports suggest that the V7+ might sport a 5.7-inch display and use Qualcomm's Snapdragon 660 processor. It is also said to feature 6GB RAM, 128GB storage and pack a 3500mAh battery.

Vivo is also expected to launch a cheaper variant called the V7 alongside the V7+. The Vivo V7 might sport a smaller 5.5-inch display and use Snapdragon 630 mobile platform. The Vivo V7 and V7+ might launch with Funtouch OS 2.6 based on Android 7.0 Nougat. Vivo recently slashed the price of the V5 Plus by Rs 4,990 to Rs 22,990. The new V7 and  V7+ are expected to hit retail stores at Rs 19,999 and Rs 27,990 respectively, but we will have to wait until the official launch to know whether Vivo goes after even more premium pricing.