As Apple touts the iPhone X as the smartphone of the future, Samsung's new ad is all about mocking the history of the iPhone. 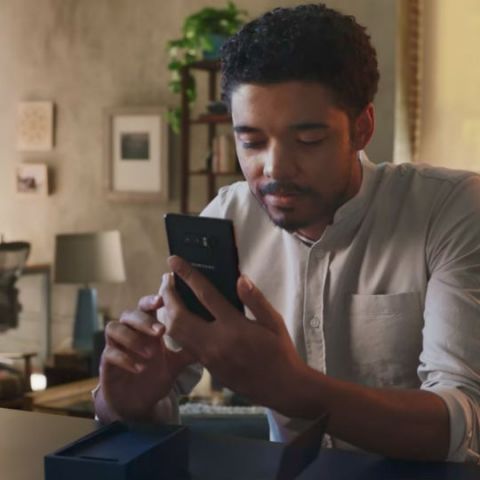 Samsung has a rich history of taking potshots at Apple, and it’s continuing that tradition with the iPhone X. As Apple’s “smartphone of the future” rolls out to the public, Samsung’s new advertisement tells you to “Upgrade to Galaxy”. The ad covers the history of Apple’s iPhone, showing a wide eyed Apple fan on his way to buy the first iPhone.

He buys it, enjoys it and then continues buying iPhones. Unfortunately, he realises Samsung’s “greatness” throughout his journey with Apple. His brand new iPhone always seems to be behind the Galaxy Note in one way or the other. As his friends scribble away to kingdom come, the Apple-fan seemingly rues the lack of a stylus on the iPhone 5S.

Out and about with the woman he loves, who happens to be using a Galaxy Note, he sees more differences. They fall into a lake and he has to throw his iPhone 6 onto a stack of rice to dry it up, while his girlfriend shows off the scenery she clicked with her Note. He then buy the iPhone 7 and has to use dongles, while his girlfriend’s phone stands tall on its wireless charger.

It seems the lack of a headphone jack was the last straw for him. He buys a Note 8 and excitedly scribbles a message to his girlfriend, “Guess what I just got”, exactly what he said when he first got an iPhone. The “Upgrade to Galaxy” is complete.