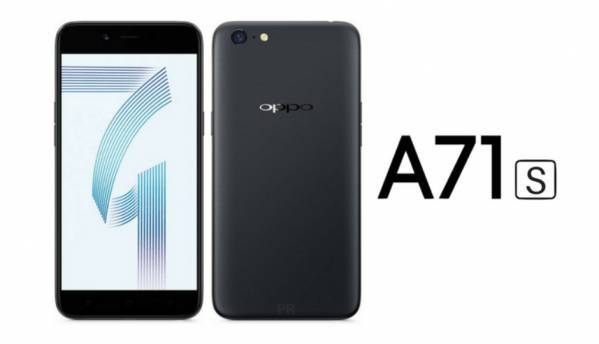 The smartphone will reportedly be powered by the MediaTek MT6750 octa-core processor with 3GB RAM and feature a 5.2-inch HD display.

Oppo will reportedly launch a new smartphone, the Oppo A71s in India priced at Rs 9,990. As per a report by Phone Radar, the device will feature almost the same specifications as the Oppo A71 (2018), which was recently launched in Pakistan. The launch details of the device is not known yet, however, it is expected to come in Black and Gold colour models.

The OPPO A71s is said to feature a metal unibody design and feature a 5.2-inch HD display with 1280 x 720p resolution. It could be powered by the MediaTek MT6750 octa-core processor and 3GB RAM with 32GB of internal storage, which can be further expanded up to 256GB via a microSD card. The device might run on Android 7.1 Nougat with ColorOS 3.1 on top.

In terms of optics, the smartphone will reportedly feature a 13MP rear camera with f/2.2 aperture and a 5MP front facing camera with f/2.4 aperture lens. The Oppo A71s is said to be a dual SIM standby device which, going by the image, will skip on the fingerprint scanner and will come with Face Unlock instead. It could be powered by a 3000mAh battery and support Wi-Fi, Bluetooth 4.0, GPS, VoLTE, 3.5mm audio jack, and a MicroUSB 2.0 port for charging.

The recently launched OPPO A71 (2018) is powered by the Snapdragon 450 octa-core processor with 2GB RAM and features a 5.2-inch HD display. It sports thick bezels on the top and bottom of the display and comes with three capacitive navigation buttons as well. The smartphone features 16GB expandable storage and runs on ColorOS 3.1 atop Android 7.1 Nougat.

The Oppo A71 (2018) features a 13MP rear camera with f/2.2 aperture and a 5MP front-facing camera with f/2.4 aperture, similar to its predecessor. It also supports the company’s AI beauty recognition technology.