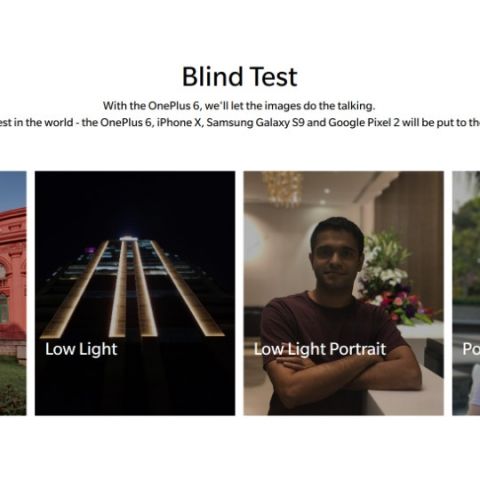 The blitzkreig of OnePlus 6(₹ 34999 at amazon) leaks and teasers has floored the pedal with just three days to go for the launch OnePlus has also joined in on the speculation. The company is teasing the camera on the OnePlus 6 in a blind test of camera samples taken from the best flagship smartphone cameras so far. OnePlus believes the OnePlus 6 is going to be one of them. Amidst all the hints and teasers revealing the hardware, OnePlus has kept tight about the camera at the back. The blind test only adds to the anticipation.

The blind test includes photos taken from the iPhone X, Samsung Galaxy S9+,Google Pixel 2 and the OnePlus 6. Fans will have to guess which is taken by what camera. The company posted four image samples for four different situations — Architecture, Portrait, Low-light and low-light portrait.

OnePlus is fairly confident about the camera prowess of its upcoming flagship. You can head over to the site and see for yourself. Call your friends over as well and vote on which is taken by what. The top three in the leaderboards have been promised a OnePlus 6. There are other gifts also on offer.

Early rumours had hinted that the phone will rock dual cameras at the back, aligned vertically in the center — A 20-megapixel primary sensor along with a 16-megapixel secondary sensor. But other than that, not much is known about the camera. What we do know is that the Google Pixel 2 relies heavily on its alogrithms to enhance the photos, while the Galaxy S9+ comes with a wider aperture to enhance low-light photos and the iPhone X is well, the iPhone X. It remains to be seen whether the OnePlus 6 can match up to the advancements made by the top three.

The OnePlus 6 is expected to launch on May 16 at an event in London followed by launch events in India and China a day later.